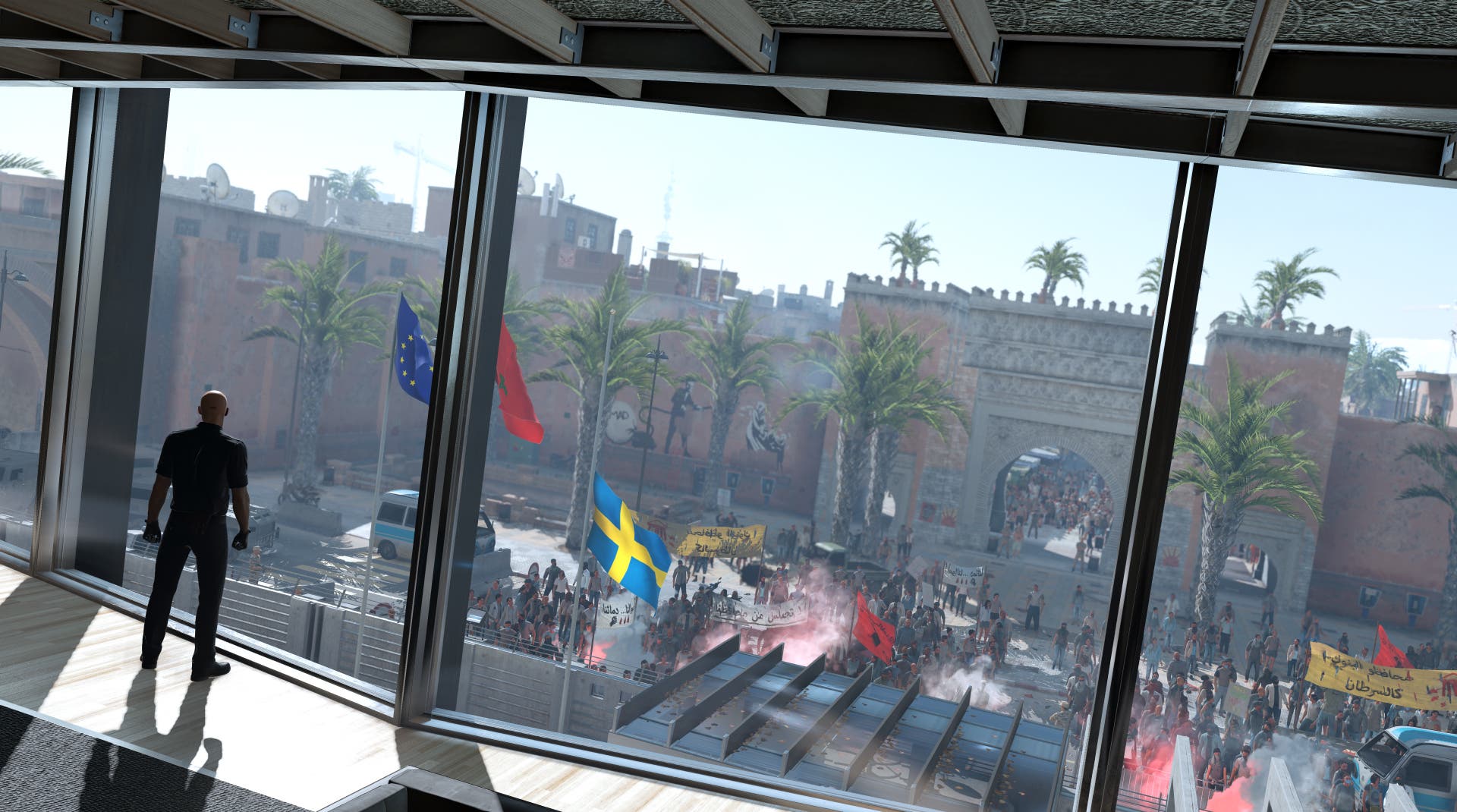 HITMAN‘s episodic adventures continue with this third installment, in what I believe to be the best delivery of a game. Without being story-heavy, and full of cliffhangers, HITMAN is able to have distinct locations to visit and play around in to experience a level in its entirety. While I like Marrakesh as a location and standalone episode, I feel it lacks a personality that Sapienza so proudly displayed. Despite that though, Marrakesh is strategic playground for Agent 47, imparting his more tactical side at resolving his targets while still being immensely enjoyable.

Agent 47’s globetrotting adventures take him to Marrakesh to undo the boiling over tensions within Morrocco. The cooperation of Claus Strandberg, the invincible CEO in hiding at his Swedish consulate, and the corrupt General Reza Zaydan is gross. General Zaydan is the linchpin for what’s to come in terms of being able to declare martial law and take total control of Marrakesh. The stakes are high this time, and not unlike Sapienza, but here there’s a different type of threat. But until this all comes together, it is hard to see why exactly Agent 47 is meddling.

Agent 47, much like Sapienza is dropped into a large environment to determine how best to take out these targets who are on opposite ends of the map. You’ll be disguising yourself as a painter and even a masseuse as the most basic and predominately featured opportunities. These are just a means to an end, but exploration grants many rewards and seeing things you wouldn’t normally uncover simply by following the opportunities alone. Marrakesh is amazingly dense not only in the design allowing for alternate routes for Agent 47 to walk through, but the marketplace and even open spaces are just filled with people, tourists and locals. This density doesn’t allow you to get away with much in terms of subduing or killing. This becomes increasingly hard when members of the military are stationed at various points around the map who are suspicious of anything and everything. This creates for some strategy in how you approach each of your targets, changing it from what you had to do in either of the previous episodes.

Compared to Sapienza, Marrakesh doesn’t have as many funny or silly moments. Which I find to be fine where this is tonally a different situation. Lives were at stake in episode two, but there’s something more real, more tangible with this political strife that needed the added weight and sincerity. It never got in the way of having fun, and shows that HITMAN can cover much of the emotional spectrum all while being a good game.

While it continues to tease, the overarching story is finally starting to pull back the curtain of what’s going on, but only slightly. Conspiracy, espionage, and mortality looming, these characters are developing and realizing the trend. This is the third episode of seven total, and it will be interesting to see how things start to come together when this is all said and done.

I feel like this shouldn’t be a thing I have to talk about, but the servers are finally stable. Across both PC and PS4, the game no longer suddenly pulls you out of a game because you’ve been disconnected. While I get the way the online and offline stuff is handled, it just is poor when the servers can’t handle the stress. With this stuff smoothed out, is much easier for me to recommend. Marrakesh is another large-scale level with multiple routes and interesting ways to complete the objective, and subsequent replays are more rewarding as you know the layout. HITMAN – Marrakesh is again a solid hit for Agent 47 and those who play this. It is a different episode than what preceded it, or what you might think because it is more serious in nature, but is really well done and absolutely worth playing.