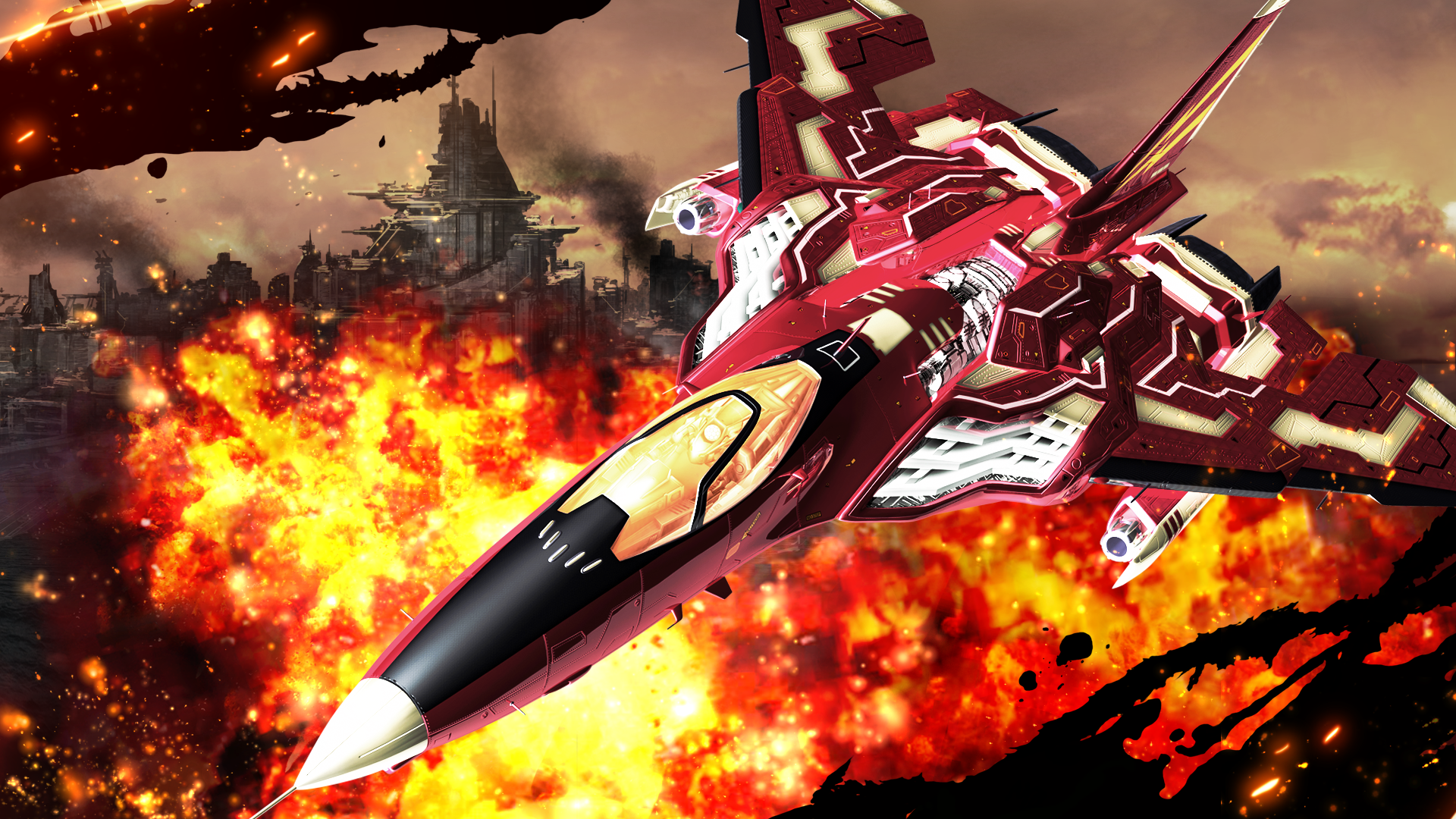 The Raiden series celebrates 25 years, and Moss Co Ltd has returned with the next entry: Raiden V, which is exclusive to the Xbox One. This sh’mup series has evolved and iterated on the past to provide a true sequel that not only looks good, but plays well and does some really cool things with the extra screen space to provide valuable information to the player. This is also the best playing Raiden to-date, making Raiden V is also the best introduction to the series you could have. There’s a story to Raiden V, where Earth’s future is at stake due to an overwhelming force. So it isn’t long before Raiden is called into action, and are tasked with stopping the invasion. There are branching paths within the story, each taken by the different aircraft of your choosing. There are three ships to choose from: the Azuma (from Japan), the Spirit of Dragon (from the United States), and the Moulin Rouge (from France). Each aircraft has their own stats of power, defense, speed, and sub-weapon use. They are similar, but do play differently and for different styles. It’s best to play each of them to see what works best, and to experience the same stages play out differently.

After selecting your ship, you can choose which types of vulcan, laser, and plasma weapons to equip. These are all preference-based, there are no statistics tied to how much damage they do, but speed and projectile location is highlighted when highlighting each weapon type. These weapons will grow more powerful as you grab pickups throughout the stages. The formula is the same, move with the left stick and shoot with the A button. You’ll be killing enemies and fairies and miclus’ will appear to help get a higher score. Among those, weapon upgrades will drop, swapping between three colors which represent the three weapon types: vulcan in red, laser in blue, and plasma in purple. There are also bombs that can be picked up and used, but there is a cap to how many you can have at any one time.

You’ll often see a chance to “Cheer!”, this system will connect with friends or strangers, and have an AI companion come in to assist with additional firepower. I never quite learned how this became available, it seemed to be just over time or something to do with the score. I wish that was outlined a bit better, but it really came in handy in tight spots to help clear the screen.

There are 8 stages to the campaign, and the aforementioned replayability to see it fully. As you encounter each boss, they become available in the Boss Attack mode. It’s all about high score, and I played through the game on Normal, which is pretty high up on the difficulties: Practice, Very Easy, Easy, Normal, Hard, and Very Hard. The higher difficulties definitely put you through your paces.

While it is a bit busy, Raiden V makes the most of the space on your screen. The game is played from vertical viewpoint. On the sides of the screen, Moss Co Ltd has added useful pieces of information and ways to relay the story to the player. Before you’d get cabinet art or miscellaneous art just to fill in the black space. Now you get video communications from headquarters, a radar to show where enemies are, how much shield you have left, and what weapon is equipped and how leveled up it is. It’s certainly a busy interface, but it allows you to just have minimal items occupying space on the actual game screen. It’s a really smart move. Raiden V is simply the best Raiden there is, mainly for its accessibility and way of easing players into this bullet hell shooter. It is unfortunate that only owners of Xbox One get to experience this, but if you have this system, you are in for a really good time. It takes an hour or so to complete all eight stages, but that’s only the bare minimum I actually spend with the game. I was compelled to get higher scores, fight boss after boss, and see the branching pathways. Moss Co Ltd. has made Raiden V approachable for those new to the series, but difficult for those who want it.