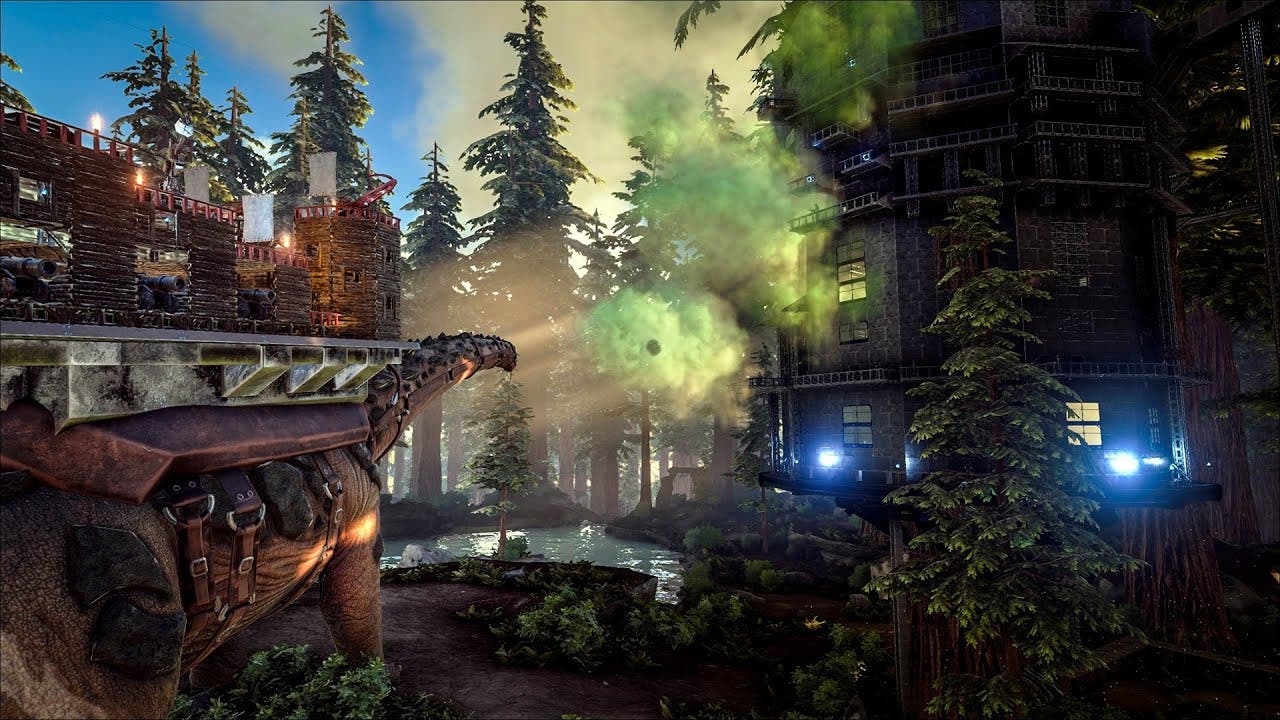 Studio Wildcard, the studio that never sleeps, is going big today in every way possible with its online dinosaur survival experience, ARK: Survival Evolved! Available to all Steam ARK players starting now, update v243 is packed with features including the opening of the stunning Redwood Forest Biome, a major extension of the Snow Biome, and new structures featuring Ewo… well uh…tree-top villages with furry creatures. In fact, there are dozens more features in this update, from Gas Masks, to Rope Ladders, Tree-House Platforms, Sap Taps, and much more.

The biggest delivery? The Titanosaur, a gargantuan creature that is among the largest ever in a multiplayer action game – slowly roams the ARK and is neither friend nor foe. Whichever Tribes can successfully tame the beat can gain a massive benefit to their forces.
Best of all ARK Survivor wanna-be’s can now purchase the ultimate dinosaur survival game for 45% off the retail price (regular $29.99, now $16.49 for a limited time) during the Steam Summer sale, running today through 10 am, Monday, July 4!

The extremely rare Titanosaur (Titanosaurus Vagacastrum) is the largest creature found on ARK island, operating for many players as a mobile superfortress capable of ferrying obscene amounts of weight, structures, defenses and creatures upon its back. Essentially a walking mountain, this herbivore often crushes creatures and buildings within its path and takes issue with any creature invading his personal space.

The Redwood Biome is an all-new biome filled with lush, giant trees sturdy enough in which to build treehouses and villages. Harvest lumber from these gigantic arbors to create your fortress super high up in the air. Take refuge among the Redwood trees with new Wood and Metal Tree Platforms! Live like a Furry Forest Creature in these massive trees! Tap into the massive redwoods to extract their sap for healthy concoctions using the new Tree Sap Taps. Reach new heights with the Retractable Rope Ladders. Extend or retract these flimsy ladders, which are good for letting allies onto your ramparts while keeping the enemy out. There is a whole new way of life to explore! Littered throughout the Redwood and expanded Snow biomes are new ruins, which in future updates will contain collectible story notes about the history of ARK.

ARK: Survival Evolved is in development for Xbox One via the ID@Xbox program, PlayStation®4 with Project Morpheus support, and Steam PC. The game is currently playable in Microsoft’s Game Preview on Xbox One and Steam’s Early Access program, which includes Oculus Rift VR support and an integration of Steam community features such as Steam Economy and Steam Workshop for custom maps and mods. Players can host private/LAN servers and have access to a custom-built version of the Unreal Engine 4 Editor for creating mods. The world of ARK is designed to be modder-friendly and ever-expanding!