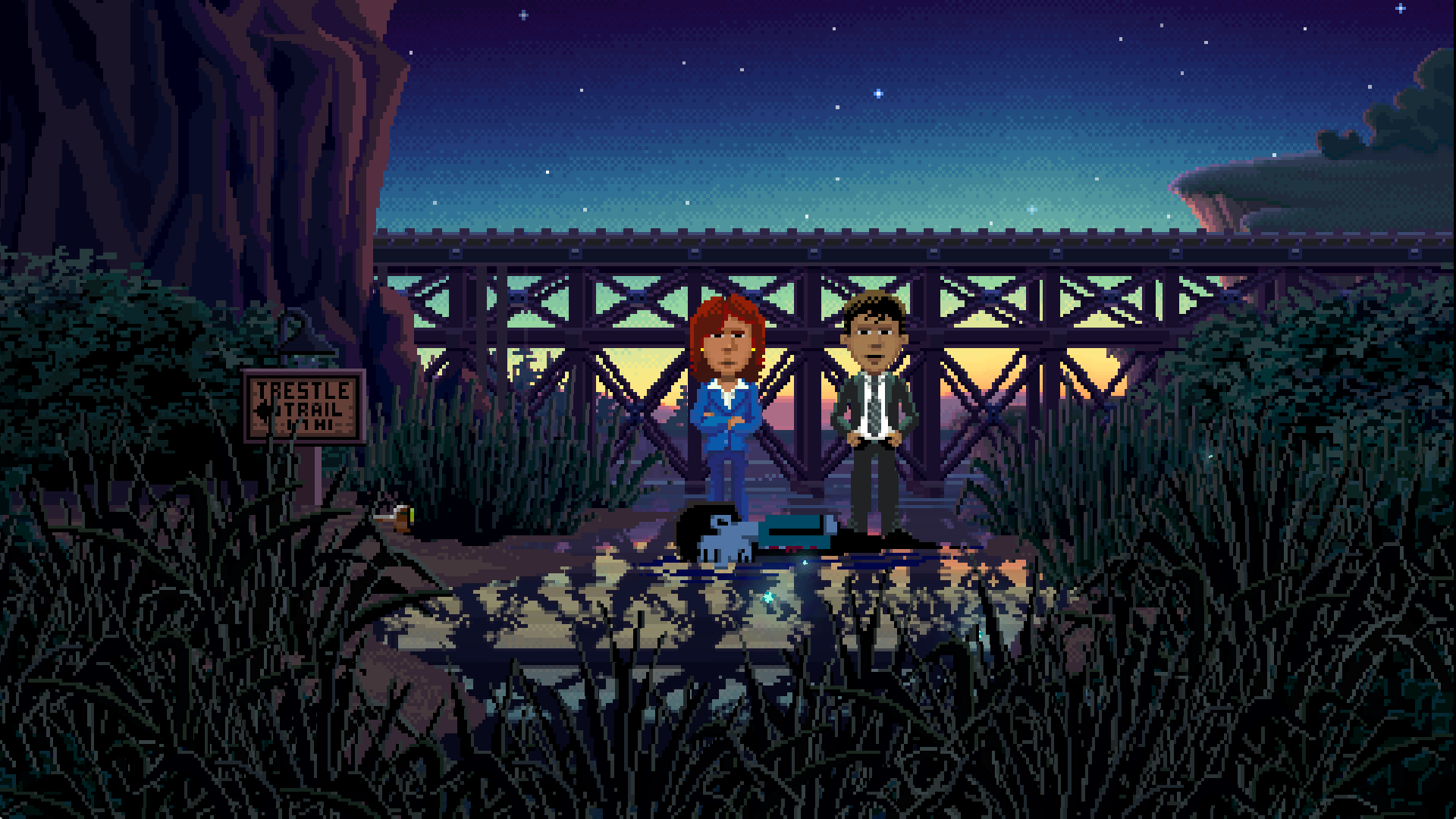 Point and click games have had a huge resurgence in the last 10 years or so. I grew up with the likes of Willy Beamish, Kings Quest, Space Quest and more.  Even being a young kid when these came out, I had a love/hate relationship with them.  They would get me stuck for countless days, trying to mix and match items and solve puzzles. Then the internet wasn’t around or as prevalent as it is today so there was no quick fix.  Still I persisted and solving puzzles was the ultimate feeling. Rob Gilbert was the creator of one of my all-time favorites, Monkey Island. When word came that he was created a new point and click game, I was super happy. Now I get to review it and does Ron have what it takes all these years later? You bet your point and click ass he does. Thimbleweed Park stars two agents sent, Angela Ray and Antonio Reyes who are sent to Thimbleweed Park to investigate a recent murder. A body laid to waste, in a river, with little clues to go by, they soon find themselves investigating the strange town. One character says something along the lines of “he is pixelating” in reference to decomposing. If the tone wasn’t already set that this was a self-referencing, fourth wall breaking, mystery comedy, it makes itself pretty clear. Soon enough players meet the characters dressed as birds and it only gets stranger from there.  Visually it has all the classic bright colors and pixelated art that the old point and click games were known for. It has a smooth looks to it that and nothing is pixelated to the point of being indiscernible. Thimbleweed Park plays like the classic adventure games that Rob helped create and inspire. This means lots of combing the screens for items, clues, talking to NPCs, and solving puzzles.  Using commands such as look, pick up, touch, etc, players experience with this type of genre will feel absolutely at home.  Controls for the console version feel well adapted enough with short cut buttons and ways to easily move across the map even with the pointer still being the main interaction with the game.  Direct control over the two agents would have been preferred but it works well enough.

As players get further into the mystery, things will go off the wall, and what players might have expected will most likely be completely different from the truth. The puzzles are of a good variant and don’t seem so hell bent on totally taxing players to scour the entire screen.  There are two difficulty levels as well, for those seeking a more friendly experience or like the days of old, really taxing the brain.  Along their journey, flashbacks will happen with other characters that are controlled. I couldn’t stop laughing at the cursing clown. Of course in comedic fashion, at one point it’s just a huge stream of censored beeps and I was in tears. Thimbleweed Park isn’t going to bring any newcomers to the genre if it’s never been the type of game to draw player’s attention. Otherwise this is a wonderful love letter to the genre from one of the original creators. It’s funny, brain busting, and just a fun title that truly brings out the best aspects of the point and click genre.