Pull tight those racing gloves because NASCAR Heat returns to bring some white knuckle racing to consoles. Monster Games is back as developer on NASCAR Heat 2 and is published by 704 Games, formerly Dunesberry-Martin Racing. In a lot of ways, Heat 2 is a step forward for the series yet drops the ball hard. So NASCAR fan, should you shell out your hard earned money this year? Read on… Last year’s Heat title was such a surprise and a good return to form for NASCAR on consoles. As I mentioned in last year’s review of Heat, this series straddles the line between Sim and Arcade and Heat 2 is no different. The game still has a good feel to it, even if the cars still feel like they are too tight around the turns. Like last year’s Heat, you can access a more simulation setting but it’s not fun to drive with the controller’s joysticks. Sure you can adjust the sensitivity of the sticks as you could in last year’s game but I could never dial them in just right. This year they hid a “simulation” mode under the Stability Help setting. Turn it off and you’ll also get access to options to car setups. As I did last year, I find this a rather strange condition to unlock car setups. Why bury them under a more hardcore mode? It’s not a real serious issue, but it is something that a potential fan of racing may want to know going in.

What Heat 2 has going for it is that it’s still fun to race. The AI feels smarter this year, it almost felt as if they knew where I was and where I was going to possibly go. It made the racing that much more engaging. One of my biggest requests last year was the inclusion of multiple series as they did way back in Dirt to Daytona. Monster Games must have listened to the fans feedback because Heat 2 includes the Camping World Truck and Xfinity Series. They aren’t just carbon copy of the Monster Cup cars either. The trucks feel a slight bit heavier and slower than their big Cup siblings. The Xfinity Cars on the other hand do feel like slower versions of the Cup cars. This was very exciting for me and when I saw the option for “Career” staring me in the face, I was taken over with glee. It was time to work my way up the ranks in what should be a fleshed out career mode from last years Heat. Unfortunately this is where the ball was dropped, extraordinarily hard. Last year’s Heat had the underpinnings and beginnings of a good Career mode. They had team upgrades, car upgrades, and the ability to sign and please sponsors. It was bare-bones but a good start. In Heat 2 they dropped all that in favor of a more Driver focused Career. You can’t start your own team, you have to race for other teams. Before they will even consider signing you though, you have to race in “Hot Seat” races with certain conditions like place in the top 10. Once signed you have the option to take over a ride from that team or use a custom car. I know what you’re thinking, custom must be where you can sign sponsors and form that relationship there. You’d be wrong though. Custom means that you get to drive the custom car you created in the Mr Driver menu off the Main Menu. You pick from a handful of sponsors, a few paint schemes, and a few numbers. There’s no soul in it and it felt so disheartening to see. I didn’t feel I had any connection to anything that was happening in this avatar’s career other than winning races. The confusing thing is that you earn money in the mode but there doesn’t seem to be any reason to it. You can’t spend it on anything like upgrades so why even have it? Full disclosure, I’m on my second season in the Truck series so if there is a use of the money, they haven’t shown up in over 70+ races. Maybe my expectations were too high for this mode.

Unfortunately it isn’t the only thing that I had an issue with. When you go to create your driver, they give you a few presets and some sliders you can adjust as well. That’s not the part I have beef with. My issue comes in the fact that you can’t move the camera. The camera is in a close up of the face during creation. So if you adjust the body slider, you can’t see at all what it is you’re changing. Maybe the guy is skinny, maybe he’s now fat. Who knows! If you create a lady you can see a slight change occurring in the shoulders and collar bones, but your guess is as good as mine if that’s the body type you actually want. Worse of all, the only way to actually see the character in full is if do a race. So to see if your character is even the way you want, you’ll have to hop into single race and go. It’s ridiculous and something I would have to assume that get patched in at some point, right?

My last gripe about this game is in its soundtrack, it’s just flat out terrible. Maybe it’s more a taste thing but none of the music jived with me. I didn’t feel as if any of the songs fit within the NASCAR feel. One other thing regarding the music, Heat 2 gives you an option to select a short musical stinger to play when you win a race. This music clip will also play when you win an online race and the other people will hear it as well. It’s a fun little additional that was ripe for some more silly jingles to use.

Heat 2 does have a few staples for a racing game like split screen racing, which is a welcomed addition and new for this year. Online multiplayer is here and is still fun to play. If you want to play just a Monster Cup Playoff, you can do that and if you want to do just a single Championship Season in any of the series, you can do that too. 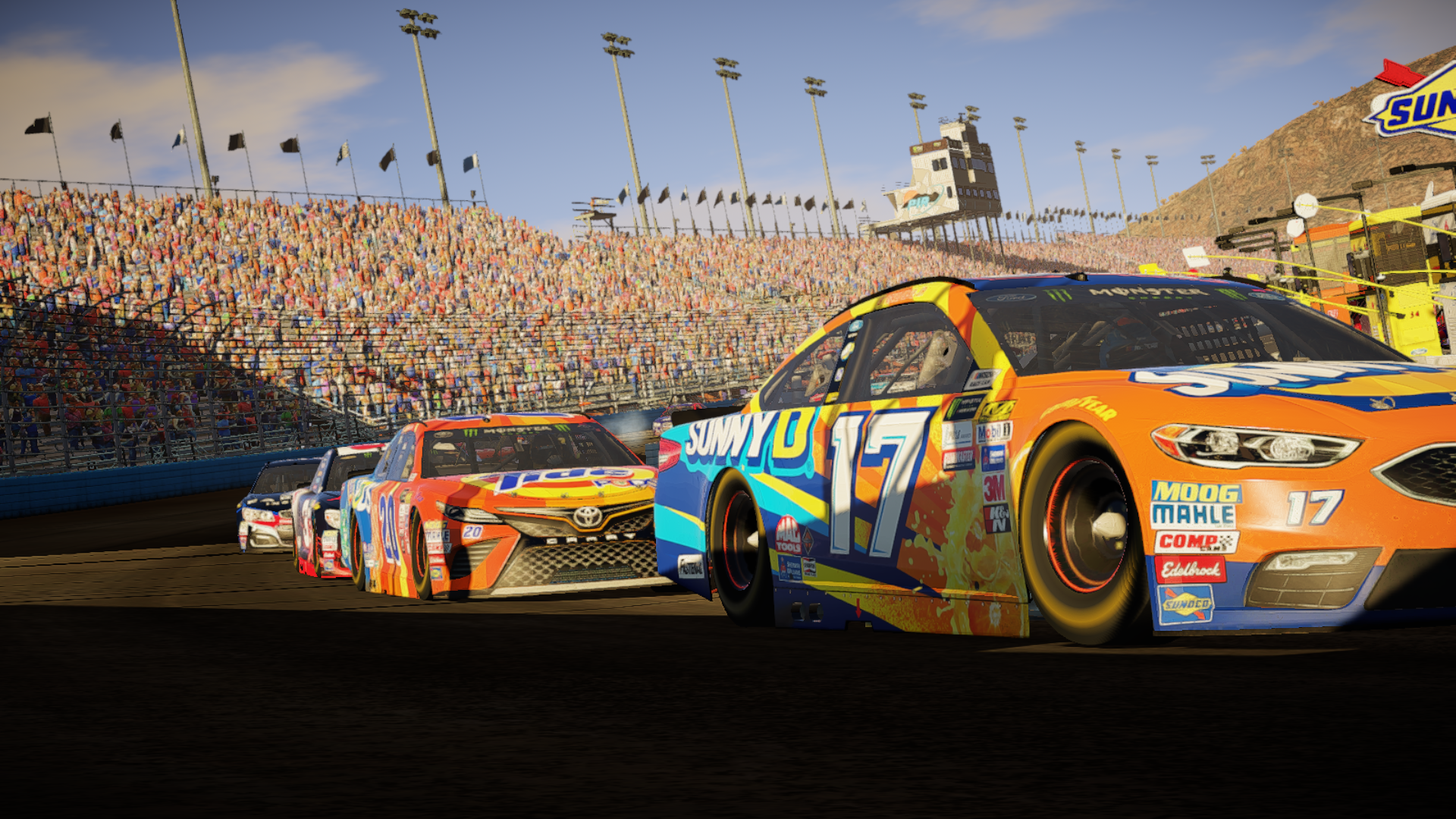 In all regards Heat 2 is an upgrade over last years game but the change to the Career Mode is a big sting overall. What should have been a bigger and more fully fleshed out Career turned into revamping and starting over. The racing is still fun and you can easily have a great time in NASCAR Heat 2, but it’s not without its flaws.