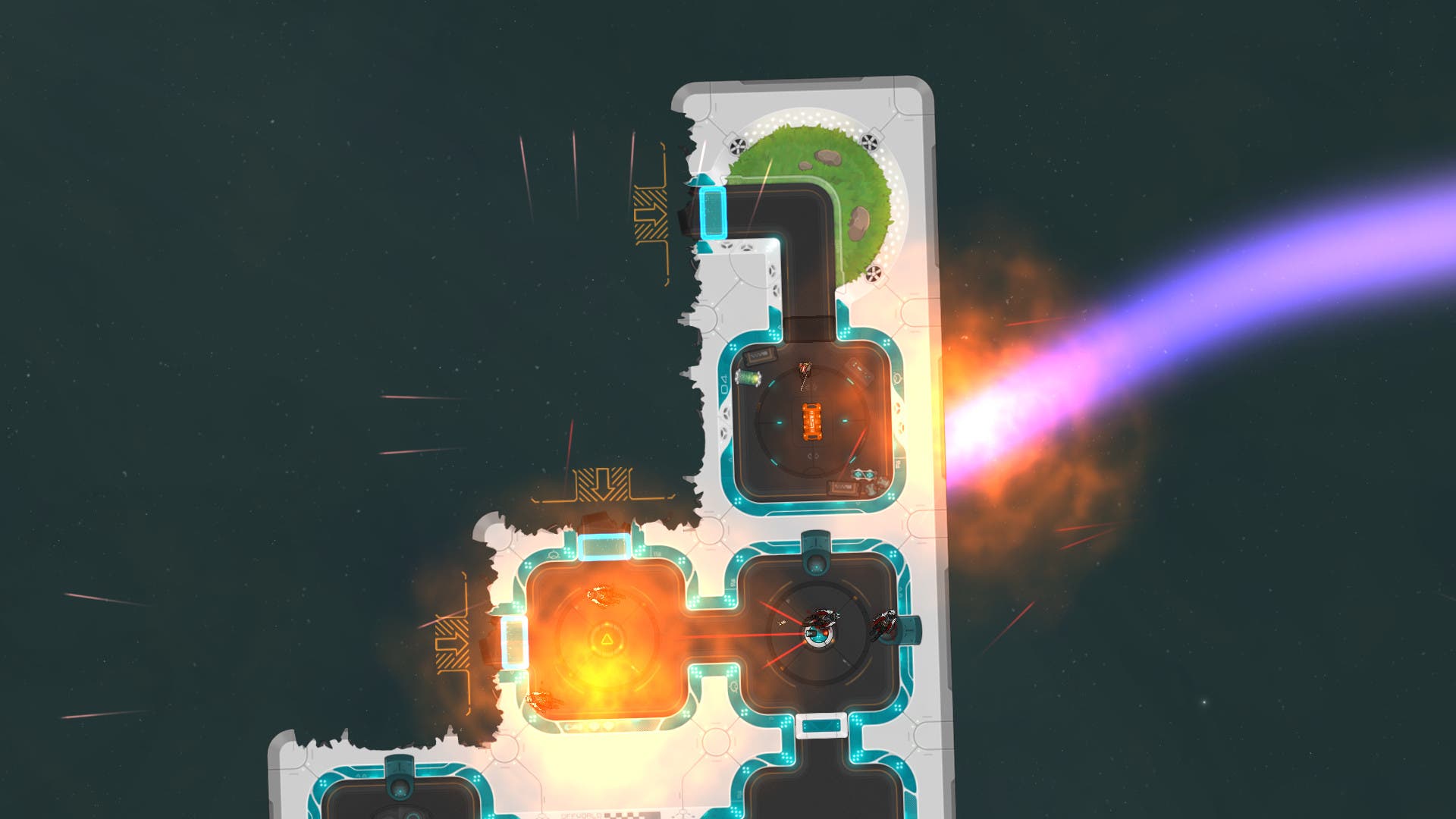 Tom Francis and team return with Heat Signature, a procedurally generated open-galaxy game in which you gallivant around, working to liberate one system at a time. Heat Signature is a sandbox, other times it is repetitive and dull, but it is always in your control. Suspicious Developments has given you all the tools to succeed, and it is up to you to implement them how you see fit. That’s what makes so much fun to play, and hard to stop playing once you’re in it. All done from a top-down perspective, everything is sprite-based and very colorful. Blending the best elements of Hotline Miami and Dishonored 2, Heat Signature presents emergent moments with great frequency. For instance, I had boarded a ship and had encountered a guard who fired a gun at me, but hit a tank and split the ship in two. the problem was that I was on the side with the person I had to assassinate (great), but the key to access the room he was in was drifting away from me (not great). So I had to remote control my ship to come get me from the other half of the ship, pick me up, go back to the other one and kill the guard with the keycard I needed, then fly back to the other half of the ship and complete my assassination.

At any one time, you can play between four different characters who are randomly generated. The more you play as one character, they will start becoming famous and won’t be able to contribute to the liberation cause as they once could. It’s at that point you must retire them, but you get to keep a weapon in their honor that you or your Steam friends can find. If your character gets killed, they get replaced and start over with new stats. Since inventory and cash not shared between characters, so liberation of galaxy is the main persistence. And seeing how big this galaxy is, can be seen when you zoom from close in to so very far away.

There are five difficulties for missions you can take on: easy, medium, hard, audacious, and mistake. The harder the mission, the better equipped enemies are. This is where you have to use Heat Signature‘s pause more seriously. With this, you can better react to things around you. Even though enemies have a glow around them, they often can get missed among the scenery. Aside from the game’s myriad of rescue, assassinate, and steal missions, are “personal missions”. There’s a vendetta that a character has, and sometimes that involves saving a former you, or one of your Steam friends. There’s also Defector missions, that let you play out with no consequences as they are not part of your crew and have a specific set of weapons that don’t draw from your inventory.

The weapons at your disposal in Heat Signature can be very well known weapons, to weapons of opportunity. For instance, you can shoot out the windows of a ship and suck everyone out of a room. Or, go more traditional with guns and melee. The blunt melee weapons only knock out targets, where must press [spacebar] over their body to kill them. And sharp melee weapons will kill. There are regular guns, or stun guns. That’s all well and good, but Heat Signature offers some really off-the-wall weapons and gadgets, like the inverter that reverses enemy shields that when they fire on you, fire inside their bubble instead of out of it. Or perhaps you can use your key cloner to get into a locked area without getting too close to an enemy. Heat Signature is open to do almost as you please just to get the job done. At any point you may trigger an alarm, whether it be from outside detection as your ship approaches, or an enemy getting away. It’s at that point a timer starts, and if it counts down to zero, you’re captured and that’s it. You do have the option to fight your way out. If you manage to be knocked out, you will be thrown out the airlock. It is here you must scramble your shuttle to come get you before you run out of oxygen. you start with 30 seconds, but each subsequent throw out the airlock reduces the total air you can hold in your lungs before death.

The galaxy has no real personality or aspect of cutting off a section of space to a faction. Training mode with no benefit, but no consequence to further help get a handle on things or if you want to experiment. The game is only as repetitive as you make it, which was not often. I was able to take on missions that I wanted to play and had my own way of dealing with them, or experimented to see how things would turn out, but sometimes things happened to me I can’t plan for, and that was the more exciting parts. Heat Signature is such a surprise to play. It’s freedom, and cycling number of missions allow you to take the tools which you’ve been given and craft and experience all your own. The incredibly smart integration of your Steam friends finding their way into your game adds reference and value to the tasks you’re given. Heat Signature is easily one of my favorite games of the year.