Offering more of the same, but for the better, Hand of Fate 2 is more of what you liked, none of what you didn't over the original. Defiant Development have done exactly what you need to do for a sequel, improve and cut out the fat. The improved missions and importance of character creation and development make it feel more personal and like your story, rather than playing someone else's. Hand of Fate 2 offers a lot of variety you would have to play several other games to get in the quality that's available here.

Hand of Fate was a unique take on collectible card games, table top RPGs, and even action RPGs. Defiant Development blended all these genres in ways that had brought a choose your own adventure to life. It had some nasty repetition, and initial growing pains, but frequent updates righted the ship and is a better game for it. Hand of Fate 2 takes all of what worked in the original, and improves on it exponentially to deliver a solid sequel that does not disappoint.

Hand of Fate 2 places you in front of the dealer, the same from the first game. Having been bested by the character of the first game, he’s seeking someone new, and it turns out it is you. Hand of Fate 2 sees the return of Story Mode and Endless Mode, but that’s coming as a free DLC after launch. The game cleverly shifts from tutorial of a generic character into the character creator where you build a female or male character of your own, albeit with limited choices. Liked the lair of the dealer before, seems too light, and his vague nonsequitors are silly, but help in world building.

The story mode features all you already know of the game: deckbuilding, CCG, action RPG, and choose your own adventure. You pick your path, and follow a series of cards laid out like a grid before you and deal with the consequences of choice and reap the rewards of chance. The back and forth between combat, dice rolls, playing cards, and text choices, there’s never any one thing to get old too fast. There are 22 paths in total to play through, where stories have you fighting for various empires run by emperors and empresses, by retrieving stolen items or righting wrongs. Should you die, the dealer wins, but you will just start over and can start the whole path again, or start a new one. 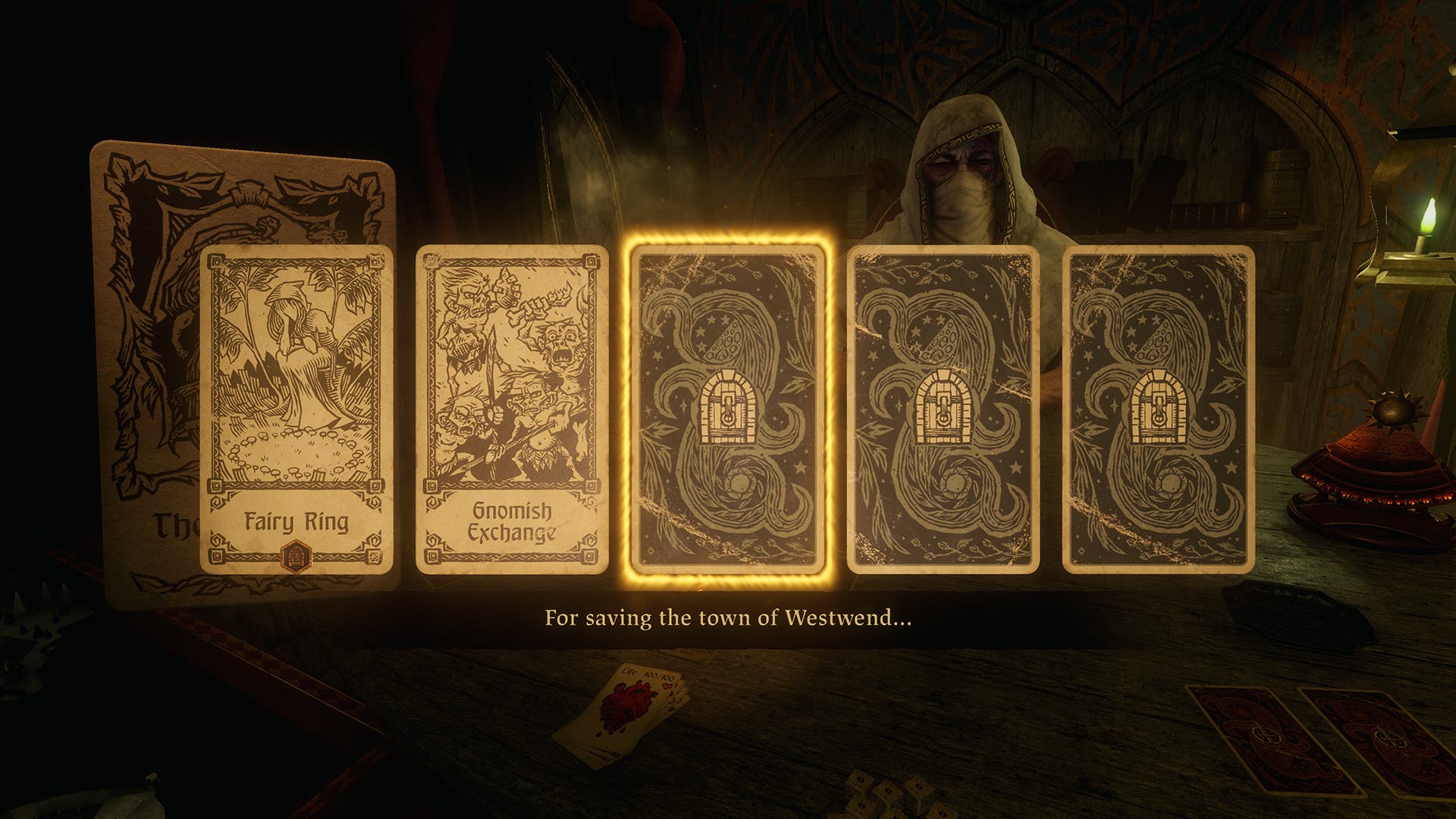 The Batman: Arkham Knight or Shadow of War style combat returns, but is more robust. You still have your attack, defend, bash, and evade. but now there’s weapon abilities and finishers. The weapon abilities are strong attacks that do massive damage, and the finishers will instantly kill a stunned enemy. As you work your way through the story, you will have companions that you can bring into combat. If you activate their special ability while in proximity, it will buff you for a short time. They aren’t very strong, and can fall in combat. It feels like Hand of Fate 2 was built around a controller, and feels most natural. Another improvement is to the arenas in which you fight. They are still generally small, but more lavish and many more enemies can occupy these areas, making combat take on a more tactical approach. And as a whole, the whole game is more detailed and refined. You’ll fight all sorts of enemies: undead bandits, trappers, skeletons, and more. The weapons they wield also are varied, with shields, bows & arrows, swords, and even throwables like bombs.

Health is persistent from one battle to the next, and even during the card sequences where bad luck can befall you, and you incur injuries from avalanches or other uncontrollable encounters. My favorite activity is the card swap, like the ball in a cup thing, if you follow, can let you pick a successful card over failure. And sometimes, depending on the encounter can be 3 failure cards, and only one success card. It’s things like this that make it exciting and somewhat terrifying to play. As such, Hand of Fate 2 still is luck based, but feels more fair on the whole. It’s easy to make your way to final boss of an area, but that cuts off growth for you. The health, food, and gold earned and lost through playing and selecting cards is part of it. Along your journey you’ll want to make camp to heal, trade, and review missions you have. 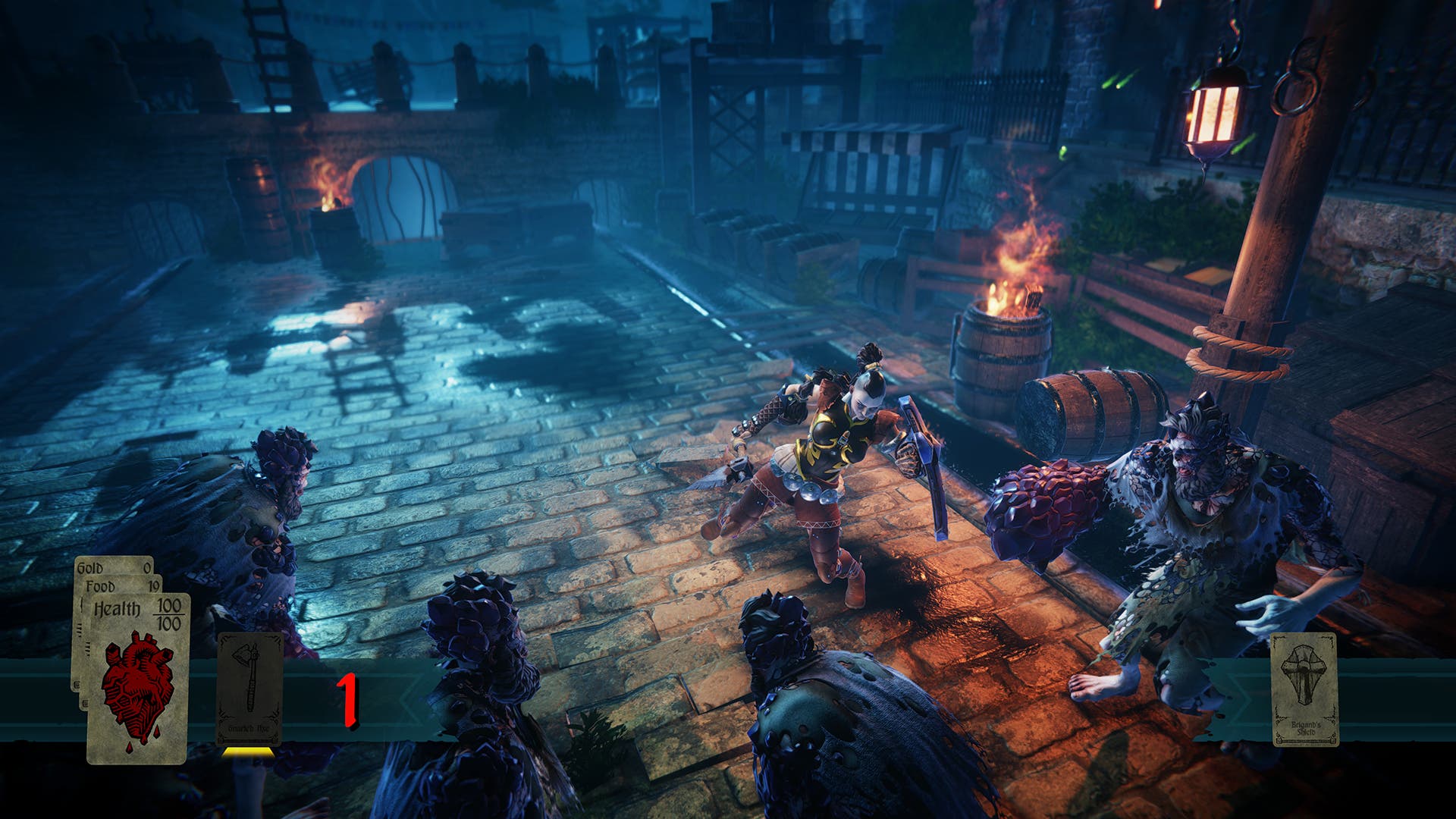 Offering more of the same, but for the better, Hand of Fate 2 is more of what you liked, none of what you didn’t over the original. Defiant Development have done exactly what you need to do for a sequel, improve and cut out the fat. The improved missions and importance of character creation and development make it feel more personal and like your story, rather than playing someone else’s. Hand of Fate 2 offers a lot of variety you would have to play several other games to get in the quality that’s available here.