Microsoft launches the Xbox One X today, making it the most powerful console available 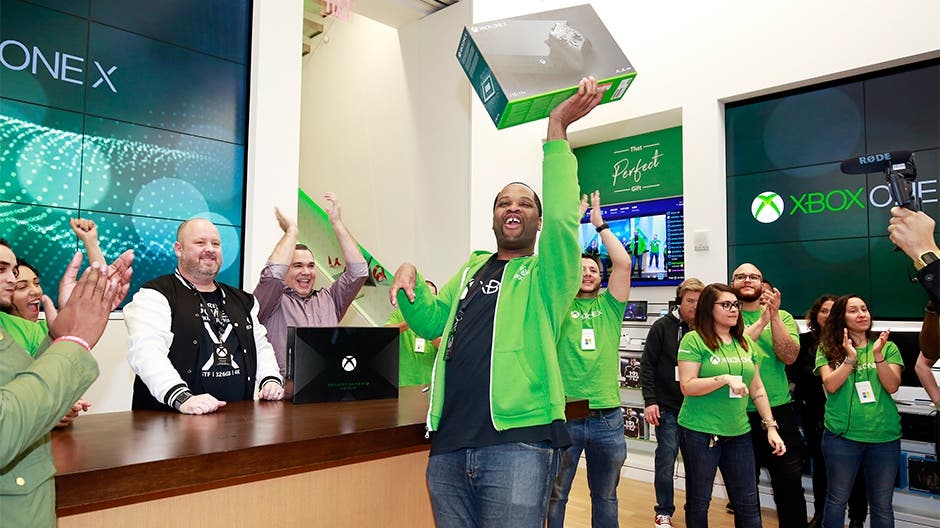 Are you upgrading to Microsoft’s most impressive console?

The official launch of the world’s most powerful console, Xbox One X, brings a new era of immersive 4K gaming and 4K entertainment to gamers across the globe. With 40 percent more power than any other console, Xbox One X is where console gamers can play the best versions of games. The new console launches with the largest games lineup in Xbox history, with more than 70 Xbox One X Enhanced titles coming in the first week and more than 50 available on launch day, including Forza Motorsport 7, Super Lucky’s Tale, Assassin’s Creed Origins, Middle-earth: Shadow of War, and FIFA 18. The Xbox One games library consists of more than 1,300 games and more than 220 exclusives, all of which play best on Xbox One X. More titles are on the way like the hottest game on the planet PlayerUnknown’s Battlegrounds, releasing as an Xbox One console launch exclusive Dec. 12, 2017.

“We built Xbox One X to give game creators the most powerful platform to bring their visions to life and to give gamers the best console to play the games of the past, present, and future,” said Phil Spencer, head of gaming, Microsoft Corp. “We’re excited to offer gamers the world’s most powerful console with access to the largest games lineup in Xbox history – more than 1,300 titles and more than 220 exclusives.”

Microsoft Corp. saw incredibly strong pre-order sales for Xbox One X, and expects the new console to be in high demand this holiday season. Gaming fans worldwide are encouraged to get the new console early before quantities run out.

Across the world, fans flocked to special Xbox events to celebrate the highly-anticipated launch of Xbox One X. Launch festivities were captured in a live broadcast from the Mixer NYC Studio on Mixer, Xbox.com, Twitch and Facebook Live, with key highlights including:

The power of Xbox One X

Xbox One X is built for true 4K gaming, with enough power to drive native 4K resolutions, High Dynamic Range and Wide Color Gamut into a pristine visual package beyond what’s capable in existing consoles. Existing Xbox One games play even better, with improved textures, smoother frame rates and faster load times, even on a 1080p TV. Xbox One X is also the only product in the world that packs all of the following features in one amazing device: 4K gaming for the world’s greatest games, a built-in 4K Ultra HD Blu-ray, 4K streaming capabilities, High Dynamic Range support for gaming and video, and premium audio that puts gamers in the center of spatial sound with Dolby Atmos support. The craftsmanship in the Xbox One X hardware means it’s not only the world’s most powerful console, it’s also the smallest and most feature-rich Xbox ever.

Today, with the launch of Xbox One X, more than 50 popular Xbox One games are receiving free updates as part of the Xbox One X Enhanced program, with more than 70 total coming in the first week. Xbox One X Enhanced games have been updated or built specifically to take full advantage of the world’s most powerful console and its 4K UHD and HDR capabilities. More than 170 new and existing games will be enhanced for Xbox One X to take advantage of its full power, including Forza Motorsport 7, Super Lucky’s Tale,  Middle-earth: Shadow of War, Assassin’s Creed Origins, Halo Wars 2, Gears of War 4, Halo 5: Guardians, Minecraft, FIFA 18, Final Fantasy XV, and Star Wars Battlefront II, with more titles on the way like PlayerUnknown’s Battlegrounds, releasing Dec. 12, 2017 as a console launch exclusive through the Xbox Game Preview program. For more information on the Xbox One X Enhanced program, visit https://www.xbox.com/enhanced.

Xbox One family of devices

Whether playing on Xbox One X or Xbox One S, gamers are treated to gaming features exclusive to the Xbox platform:

Xbox One X is available in 35 Xbox One markets and retails at US$499, £449, €499, C$599 and A$6492, with additional markets launching soon. For the latest on where to buy Xbox One X, visit xbox.com/xboxonex. You can also head to your local retailer, including Microsoft Store, for more information.

1 Independent IHS Markit study, June/July 2016. Tested on Xbox One versus PlayStation 4 on five of the top selling games with matchmaking; results may vary, not an endorsement.