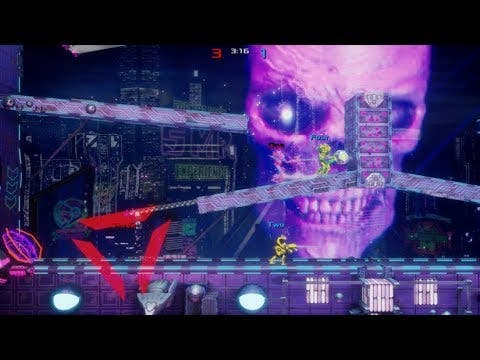 March 2, 2018 – Italian independent developer Indomitus Games is happy to announce that multiplayer action sports game 5 Minutes Rage will be available on Steam for Windows PC starting today at 9 AM PST (5 PM GMT) for $11.99 (€11.99).

Moreover, the first two days will be free for everyone to try the game!

In the free version, players can access to all the stages and features of the game in multiplayer mode, and can compete 1v1 against AI in local mode.

Developed by Indomitus Games – the studio behind the innovative voice-controlled fantasy adventure In Verbis Virtus – 5 Minutes Rage is a frantic multiplayer sports game where two teams of “junkbots” battle to the death with cannon shots to throw the ball into the goal. The rules are simple: unleash your rage, destroy your opponents, catch the ball and score!

“With 5 Minutes Rage, we aimed at making a hybrid game that takes the best from the so-called ‘couch games’ and eSports,” says Denis Gualtieri, CEO of Indomitus Games. “5 Minutes Rage is straightforward and fun but with enough room to develop skills and tactics, our main influences being Nintendo’s Super Smash Bros and Super Mario Strikers.”