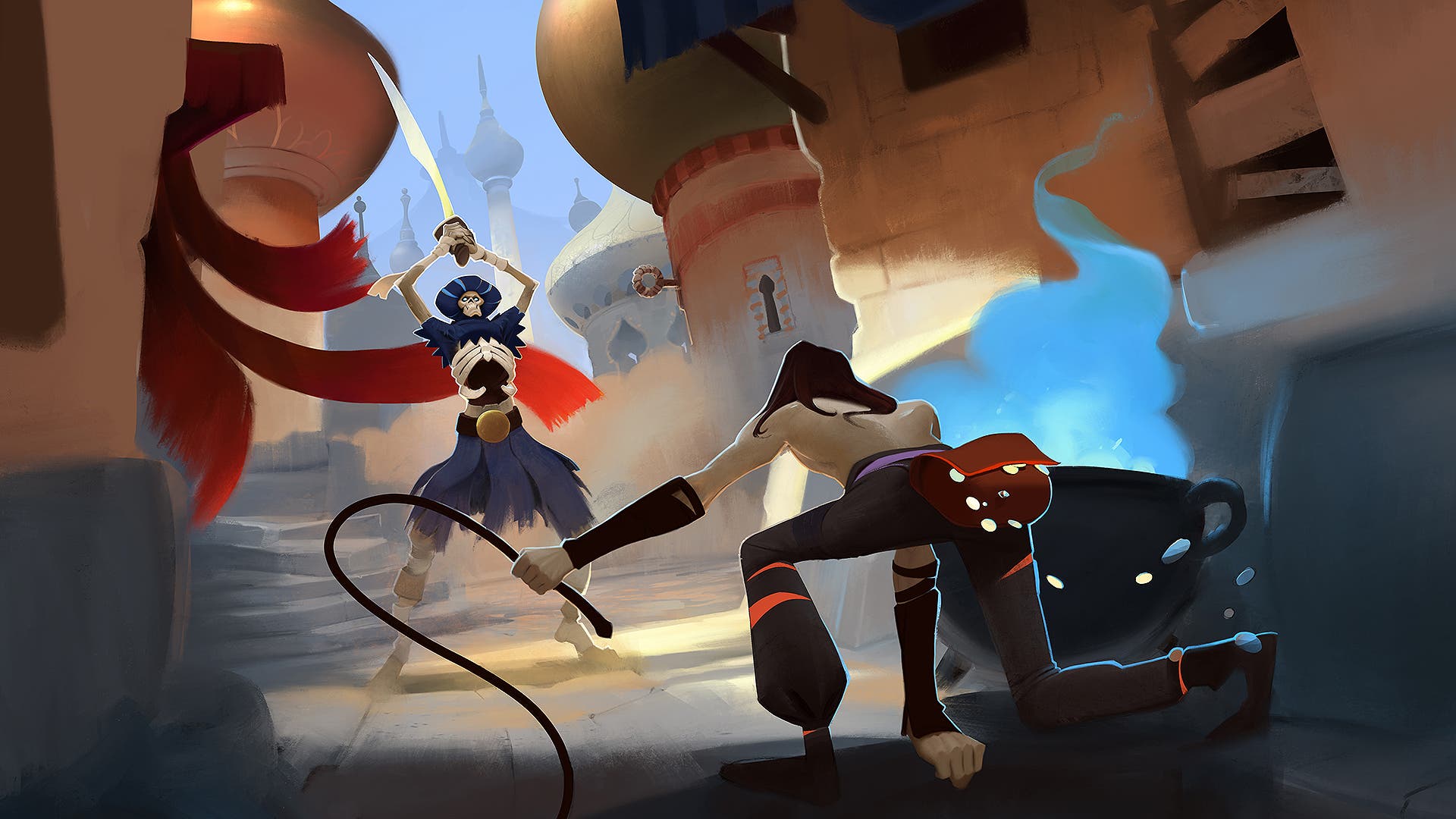 Inspired by an episode of “One Thousand and One Nights” (also known as “Arabian Nights”), the City of Brass is Uppercut Games’ twist on the tale. While the original was a story that meant express the downfalls of wealth, the game is about survival and reversing a curse. You won’t find Aladdin and Princess Jasmine here, but you will find a rich, luxurious world to explore that’s conversely incredibly ruthless. City of Brass is captivating as it incites curiosity and the desire to see more with each return trip through the gates.

City of Brass is a game that’s more about showing than telling. It has its fair share of pop-up storytelling, but the environmental storytelling is the most informational. What you’re shown, is a look and feel to that of Prince of Persia after years of decay. Now, this is a roguelite where no two runs will be the same, because levels and enemies are procedurally generated. While you think this is something you’ve seen and done before, the combat is the star of the show here.

The developers at Uppercut Games are made up of senior developers of BioShock, so City of Brass‘ combat influences revolve around a combination of stunning and follow-up melee strikes similar to the shock and wrench tactic employed in the early hours of that aforementioned game. Dishing out stuns like an Arabian Indiana Jones with your bullwhip, as you’ll also be able to take off armor, blow up explosive vases, and sweep the legs to knock enemies on their ass. In the other hand is your sword, a scimitar to slice and dice as your follow-up. The whip is multi-purpose, not only to serve as something of an offensive weapon, but defensive, as well as mobility to grab rings to propel you across a room. The whip is used as a means to grab gold items to build up your currency from across distances for convenience.

Traps are both a blessing and a curse, as they can be your undoing, or your greatest savior. As you run, jump, and slide through a level, there will be plenty of hazards mostly in the form of spikes that will emerge from the floor. Step on them, and you’ll be impaled for damage. Thankfully it is not a one-hit kill, but it will if your health is low enough. You can trigger them with your bullwhip, and then dash through after just as it resets. Other traps like the devious trap doors will drop you into a pit of spikes. Others you’ll see like poison gas and blunt impalement is just as deadly. Those cognizant if what they look and sound like can use them against the undead enemies to ensure minimal damage from traditional combat.

City of Brass‘ use of traps is like the most dangerous episode of “Legends of the Hidden Temple”. Like the once popular kids television show, you can unlock shortcuts that get you to new areas faster for subsequent runs. The City of Brass can also house items for you, to retrieve at a later time. Another similarity to its game show nature, is the imposed time limit. It’s not seen as a hindrance, but rather as a means to make sure you’re always moving forward. There’s a careful balance to killing and collecting all the gold as it is to just progress and skip rooms for the sake of survival. City of Brass manages this really well, and you don’t feel like you’ve missed out by not seeing everything a level has to offer.

An exciting and distinctive element of City of Brass is the adjustable difficulty. It doesn’t work like you’d expect, as lets you choose between Burdens and Blessings, or Halo skulls and passive perks, respectfully. The burdens need to be unlocked, but they will allow you to make the game harder and the blessings will make it easier for those who want to experience all there is. This shows that Uppercut Games wants City of Brass to be beaten – so regardless of your adjustments, it will take dozens of retries to get there.

You have finite health in City of Brass, and can take a decent amount of hits before succumbing. Health can be bought back through various means, directly or via items. There are genies in the game, from your standard genies to malevolent genies. You get to choose between three wishes that will make things easier for your subsequent time within the gates of the City of Brass. The game’s version of the shopkeeper is fitting and wholly exciting to come across if you’ve got the coin to make your dreams come true.

There are thirteen levels in City of Brass before you come to the final boss. This becomes a test as to whether your choices from when you started and throughout your journey if you’ve built your character to last through the gauntlet. If you manage to beat the game by any means, that’s not all there is. Replayability exists by modifying blessings and burdens help, or you can try the Daily Challenge mode. This mode lets you play the game without burdens or blessings, and allows you to compete for a spot on the leaderboards against friends and strangers alike.

Uppercut Games have made it so you can link your Mixer and/or Twitch account to the game, so that when you’re streaming you can invite your viewers to alter and interact with your game directly. This interaction can make it so they help or hurt your run by giving health, spawning an ally, spawning an additional enemy, making enemies easy or hard, or inserting fake noises that make you think things are there when they aren’t. The fake noises in particular is the most genuine relation to “One Thousand and One Nights”, because this story in particular is so creepy and was full of illusions that drove those who came there to their death. I’d like to see this interactivity to go a bit further to be more in line with the episode, as this is a perfect fit for interactive storytelling.

This game is a wonderful homage to “One Thousand and One Nights” / “Arabian Nights”, utilizing the episode written about the City of Brass to its fullest and bringing it to life in a unique way. This game is the best implementation of the first-person roguelite I’ve ever seen. While it lacks permanence, it makes up for the great blessing and burdens system. The combat is a one-two punch of success, and nimble movement make everything feel fluid. In addition to each gameplay element being so well thought out, City of Brass is excellent at delivering stunning visuals and storytelling that other games dare to try.