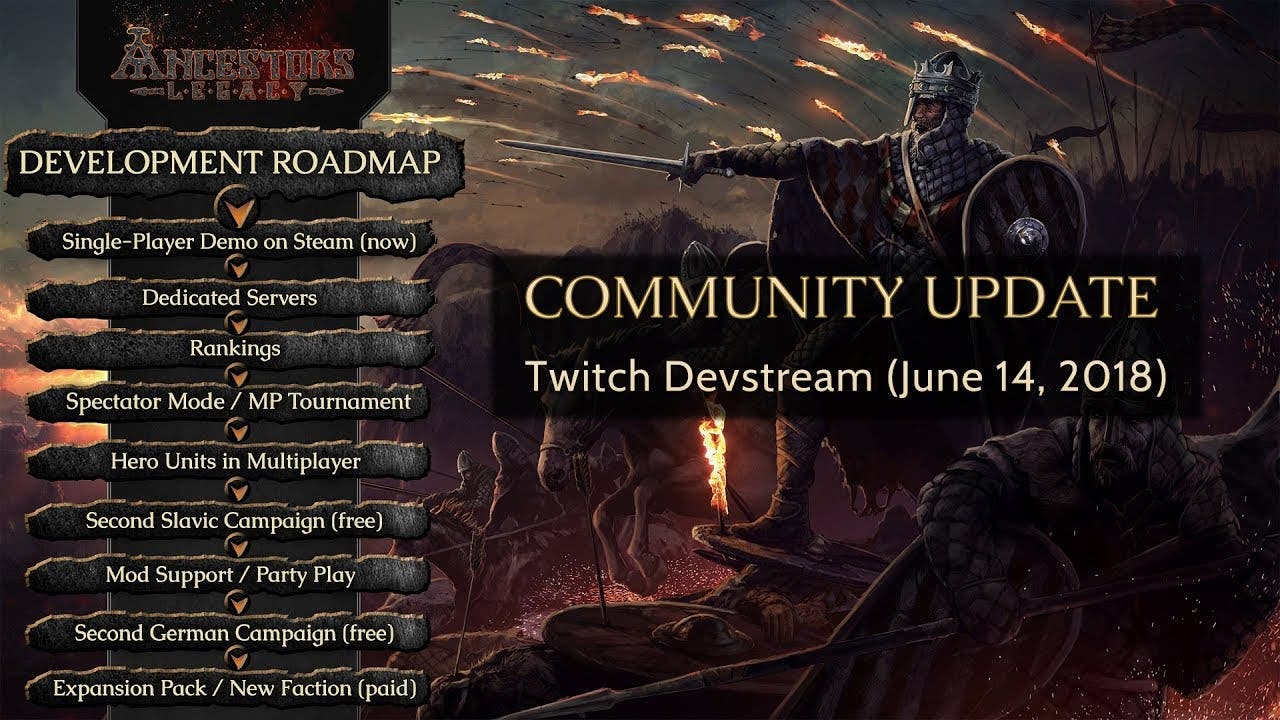 PRAGUE, Czech Republic, 21 June 2018 – Ancestors Legacy, the history-inspired squad-based real-time strategy, has been out for a month and the developers at Destructive Creations, together with 1C, would like to present their plans for future improvements and expansion of the title. This will offer an enhanced player experience and more content. Some of the roadmap items are commented on, in more depth and in a very personable manner, by Tomasz Gop, Destructive Creations’ producer, in a fresh DEVLOG VIDEO – https://youtu.be/TLoByM9kNkc

THE NEW TRAILER is a visual feast for action-seeking players. It introduces each of the four nations that are present, their units and the main features of the game. Taken purely from in-game footage, the trailer conveys the action, atmosphere and sheer brutality of Ancestors Legacy, an RTS inspired by true historic events – https://youtu.be/1Vi6-OwfZEE

THE FREE DEMO is now available to all players who want to get a feel of the single player campaigns before purchasing the game. Although the multiplayer beta was available to everyone for an extensive period of time, there was no way for potential players to test out for free the other significant part of the game until now. Downloadable from SteamTM, the demo presents the first mission of the first Slavic campaign that introduces prince Mieszko in his pursuit to unite the Slavic tribes and turn them into the allies that would eventually create a strong Christian nation. An extensive map and numerous ways of fulfilling the goals of this mission makes the demo a great way to get acquainted with Ancestors Legacy. And, as Ancestors Legacy will also be part of the STEAM SUMMER SALE, it is a great opportunity to combine the two, get some % off, and continue then onto the full series of campaigns that the game has to offer.

THE ORIGINAL SOUNDTRACK is a crucial part of Ancestors Legacy that adds the right mood and atmosphere to each of its parts, be it the trailers, the menu screens, the cutscenes or the actual gameplay. Being very proud of the work by Adam Skorupa and Krzysztof Wierzynkiewicz, we would like to share more of it with the community. 9 tracks, out of the total 35, were hand-picked by the composers and are now available for anyone’s enjoyment – https://youtu.be/gvZfwg1fS_k

In an effort to make the game accessible to as many players as possible, more languages are being added. The recent Japanese localization will soon be followed by yet another language – Brazilian Portuguese.

DEDICATED SERVERS have been one the most requested features for Ancestors Legacy and they are now confirmed to be launched just in time for the second week of the Steam Summer Sale. They will not only provide a more robust solution for multiplayer games, but will initially bring more features for community matches. Rankings and ladders are the most visible examples. Based on an Elo rating system, they will help create an even more competitive environment in which fans can improve and compare their skills against others. Spectator mode will make it into the first batch of features, in time for the first official tournaments, while Party mode will enable private matches amongst friends and closed groups. And the thoroughly discussed Hero units will also become an optional part of the MP environment. Like their single player counterparts, they will be available right from the start of each match and they will have permadeath that will not result in defeat, hence also rendering the use of the units optional.

OFFICIAL MULTIPLAYER TOURNAMENT will be taking place on July 21-22, 2018 in honor of the launch of the dedicated servers. Professionally organized, ran and commented by The Overpowered Noobs, it will present a great opportunity to match skills against other RTS players and win some very cool prizes from partners supporting Ancestors Legacy and the tournament itself. More information and sign-ups will be available from 27th June.

ADDITIONAL FREE CAMPAIGNS that have been promised upon release of Ancestors Legacy and have their permanent placeholders within the game’s menu, will offer more story and action for the Slavic and German nations. The second Slavic campaign follows the steps of the Mieszko dynasty, specifically Mieszko’s son, the first king of Poland after his father united the pagan Slavic tribes. The German campaign, on the other hand, will take players to a different location, as it is based on the history of the Teutonic knights, Christian crusaders originating in the Kingdom of Jerusalem and operating there and in the Baltics. After these free updates, an altogether NEW NATION will be introduced into Ancestors Legacy through a paid DLC update. More info on that is yet to be revealed.

The current list of planned new features and additions does not cover all that is being planned for the future, there’s more to come to keep fans happy, and the team intends to continue supplying fans with content and reacting to their needs and wishes with regards to Ancestors Legacy. The Tactical pause option and Modding support are examples of additional features that players can look forward to. Following the official channels of the game, they will be notified in time about the launch of each new addition.