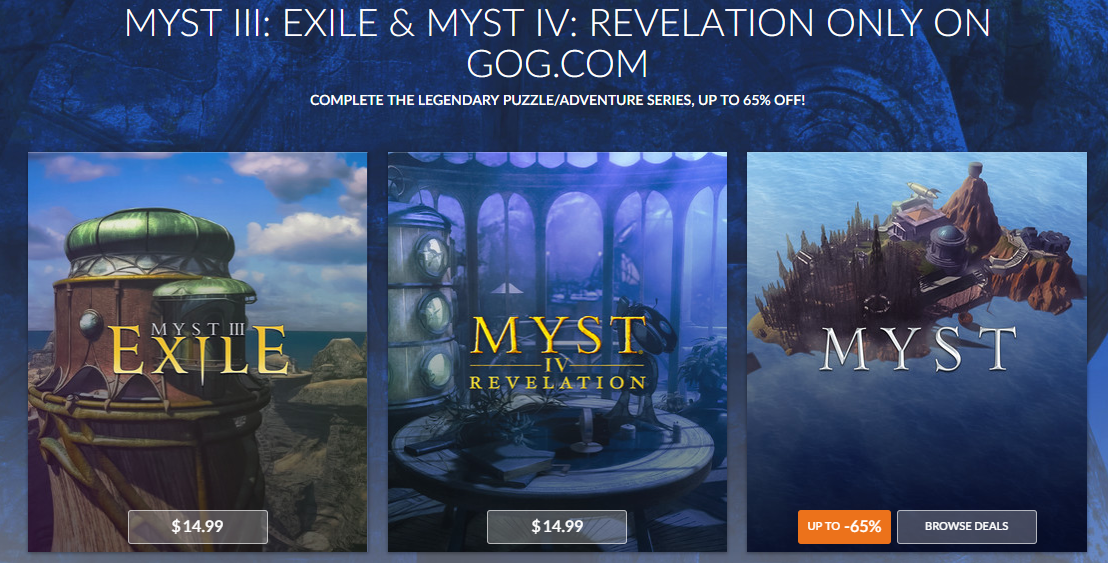 JUNE 29 – 25 years of Myst! That’s what this is all about really – a momentous anniversary for one of the most influential gaming franchises in history:

Myst III: Exile and Myst IV: Revelation are available once again and the entire Myst saga is now fully complete and upgraded for modern PCs – only on GOG.COM. Also save 50% on realMyst: Masterpiece Edition and 65% on Myst: Masterpiece Edition, Riven, and Myst V all best experienced on GOG.COM, the digital game store where the classics are evergreen!

An outrageously successful Kickstarter for the definitive Myst 25th Anniversary Collector’s Edition reached over 1000% of its goal thanks to nineteen thousand three hundred and four amazing backers earlier this year. But the stunning physical game artifacts only tell half the story – the other half is Myst III: Exile and Myst IV: Revelation. Virtually unattainable through official distribution channels since their initial release, the missing chapters have been upgraded to run on Windows 10 by GOG.COM, and soon to include macOS support provided by CodeWeavers.

“An extremely successful and balanced adventure, and a worthy sequel in a venerable franchise.” (Adventure Gamers) Myst III: Exile was a treat for fans and a “new life for the Myst franchise” (PC Gamer). But it might be the review published on GameSpy back in the day which put it best: “If you are not a fan of “Myst,” Myst III offers you an empty plate. For fans of the series it is an entire smorgasbord.”

Not long after, Myst IV: Revelation was released to “the thrill of being able to fully and freely explore the game’s imaginative and remarkably lifelike worlds” (GameSpot). “For those who love Myst and everything it represents, [this] iteration in the series is what they live for” (IGN), while “the sheer number of things going on in each scene, coupled with the fact that you almost always have control of the camera make [Myst IV] feel like an actual place moreso than any adventure game before it” (Game Informer).

Join GOG.COM and Cyan Worlds in celebrating the 25th Anniversary of Myst, play the missing chapters and save up to 65% on the rest of the series until July 6, 11 AM UTC – all best experienced on GOG.COM