What’s in front of us is Danger Zone 2, a game that succeeds and one-upping itself. Gone is the old testing, hologram, confined spaces of the first game. Danger Zone 2 takes place entirely outside, on roads, and it’s about causing the most mayhem, and maximizing damage for the highest score in the form of cash. A change of setting isn’t all, Danger Zone 2 feels the closest to a Burnout game yet, and with another title coming this year, should be the culmination of what Three Fields Entertainment envisioned when they formed.

Danger Zone 2 doesn’t have a story of any kind, but it does take place in real-locations, at the world’s most accident-prone areas for vehicles. The main mode has a training section, and three regions to progress in. After some significant progress, a bonus mode is revealed and later unlocked. Each event has a pre-selected vehicle to be used on a given track, you don’t have the option of choice, but these eight cars are diverse and handle differently from one another, like a taxi to a hypercar to a big rig. Even this is out of your hands, it puts everyone on the same playing field when it comes to leaderboards.

The game is all about roots, and you’ll see DNA from past Burnout games such as the Traffic Checking mechanic from Burnout Revenge. Here, you have the ability to bump into same-way traffic and send it careening off cliffs or into opposing traffic, to begin the mayhem of mashing cars. Danger Zone 2 feels more complete than its predecessor. Despite the corridors, the original game left me impressed for the future games this studio would go on to make. 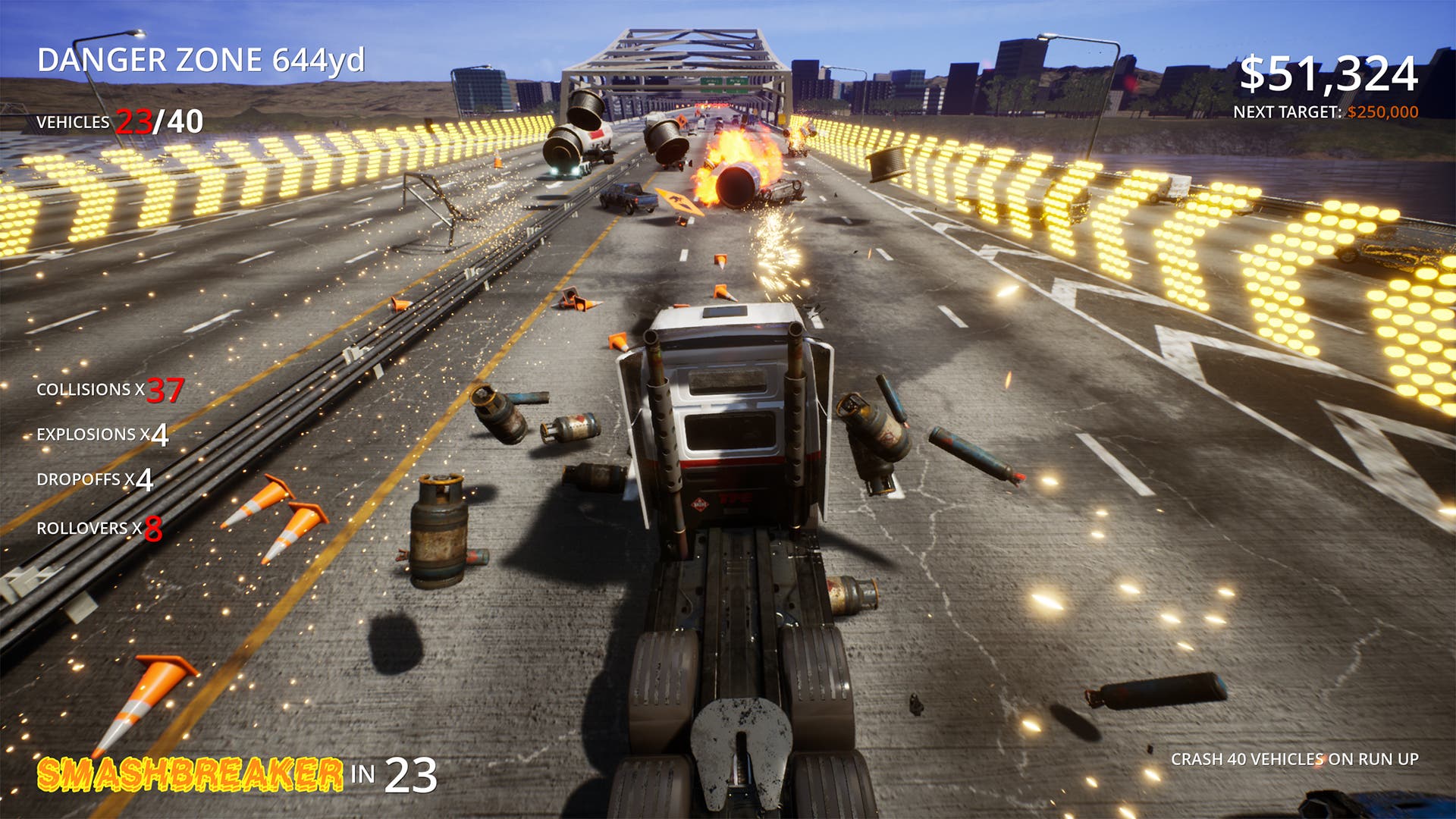 Each levels start off by giving you a run-down of what the highest score is, and what the run-up challenge is. These run-up challenges allow you to earn extra money by doing something from the very beginning of a run up until complete. Sometimes this is performing a boost chain, other times it’s hitting specific vehicles, or hitting a series of checkpoints. It adds a layer of precision and strategy when trying to earn the highest score possible.

All levels require that you get into the “Danger Zone”. The game will indicate how far away you are from the target zone, if you crash before then, it’s a restart. If you make it, then you must crash into cars, collect pickups, and whatever else to ensure you cause the most damage. There are bronze, silver, and gold cash pick-ups that if picked up, earn you a grand slam bonus. Once the timer runs out, you’re given a score and a rating. You earn medals based on score, from bronze to silver to gold, and finally platinum.m Scores are lowered and a bit more materialistic, landing with anything more than one million dollars will earn you a platinum. 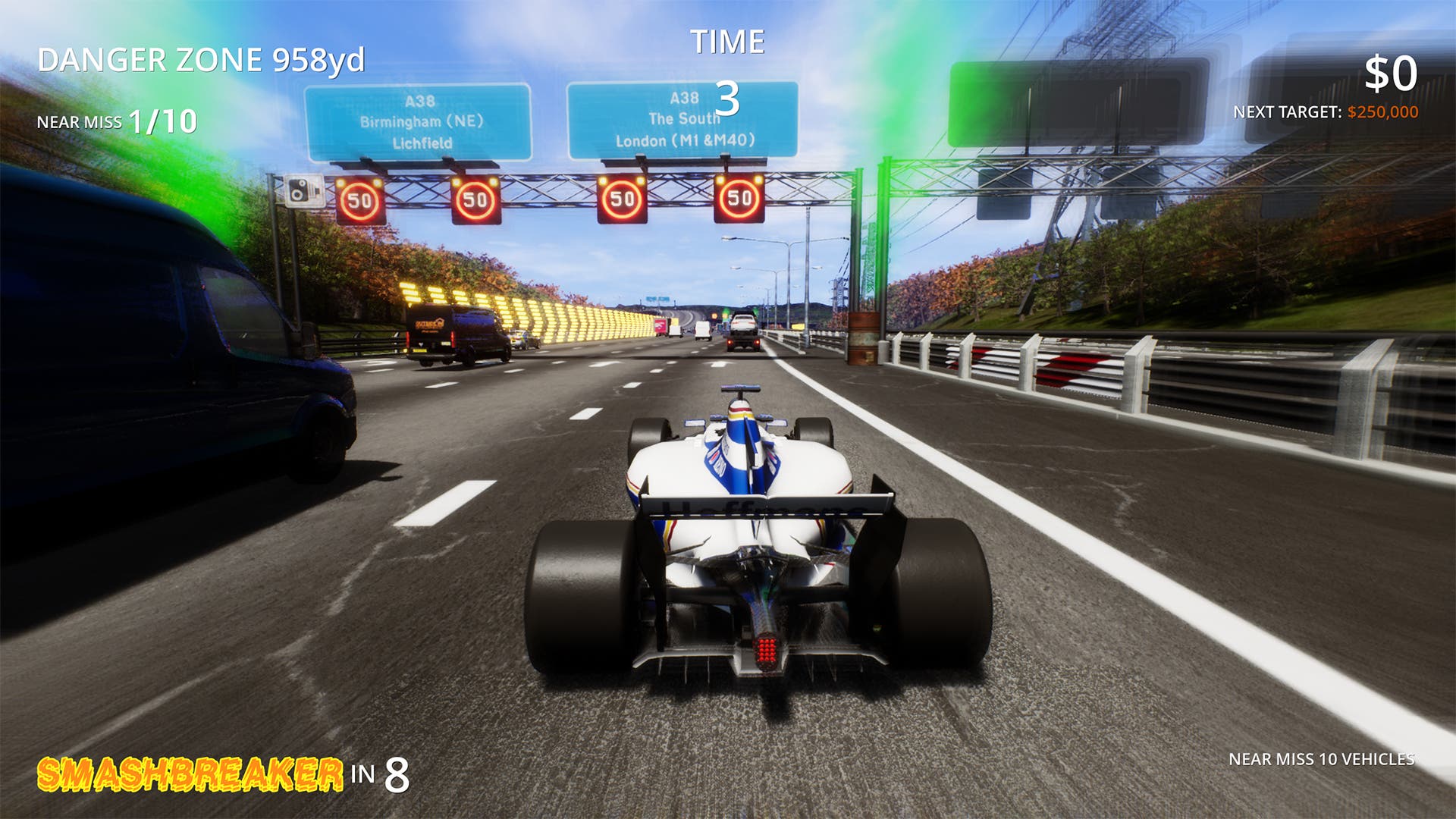 This is a better proportioned game, where Three Fields Entertainment delivers a fuller game for the price. I completed all the levels in about an hour, but it took me an additional three hours to get platinum on every level. There are 6 training levels, 23 regular levels, and 3 bonus levels. Compared to the light offering of the first game, and the rather mundane levels, Danger Zone 2 is better at giving you more game for your money.

Danger Zone 2 utilizes Unreal Engine 4 to its fullest, with more particles, physics, and lighting to provide day and night maps. The UI, while rather basic, gives more information. For photo enthusiasts, the ability to hide the HUD also makes for a more immersive experience. What’s obvious from the get-go, is that there’s no music in the game. The title screen has a crash sound, and instinctively in my head I fill it in with the Burnout 2 title music (YT link), because that’s what that game did when you started it up. Danger Zone 2 is full of little details, I like how the license plates on the cars will change based on the location it takes place in.

Danger Zone 2 improves upon the original in every way, and it pays off so well. This microgame is really something you should play, more so than the previous. Three Fields Entertainment is building up to something big, and that’s coming later this year, known as Dangerous Driving. It’ll be the game we’ve been waiting for, and have been seeing bits and pieces of from these veteran developers of the Burnout series. “If you want something done right, you do it yourself”, and Three Fields Entertainment is doing just that.