PETERSFIELD, ENGLAND — June 21, 2018 — Three Fields Entertainment, a small independent British developer led by industry veterans Fiona Sperry and Alex Ward, today announced their next TWO games. The first to be released next month is Danger Zone 2, an ambitious sequel which takes the crash testing action out of Test Zones and onto real public roads. Available this Winter, the second game, Dangerous Driving, is a brand new IP for the studioand a closed track competitive racing game featuring boosts, takedowns, destruction and the biggest car crashes seen in a racing game to date.

“Each game we make builds from the previous one and is a stepping stone to the next. We are really excited about the next two games we have coming up,” said Fiona Sperry, Founder and CEO of Three Fields Entertainment.  “Danger Zone 2 is a significant step up from the first game with lots more driving including drifting and boosting, a variety of objectives, brand new vehicles and even more spectacular crashes.”

Powered by Epic’s Unreal® Engine 4 and set on the Freeways of the USA, the Motorways of the UK and the Autovias of Spain, Danger Zone 2 combines realistic physics with explosive gameplay and features 26 exciting single-player levels set across 17 unique locations.

Alex Ward, Founder and Creative Director of Three Fields Entertainment said “We’re taking all that we’ve learnt to develop our most ambitious title to date.  Dangerous Driving gets me back to making arcade racing, the kind of software I am most passionate about. For the first time, fans will be able to come along on the journey of how we‘re creating the game via regular live streams.” 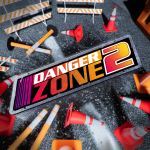