Two Point Hospital is a game that puts you in charge of running a network of hospitals and making medicine available for all the weird ailments people have, and tries to outdo your competitors in every way. This is a spiritual successor to Theme Hospital, which was released in 1997. Since then, a sequel has been eagerly awaited, despite it being unlikely to happen as the years went on. Helmed by the original creators, Two Point Hospital takes Theme Hospital‘s place to be the worthy, goofy, and silly simulator successor it should be. 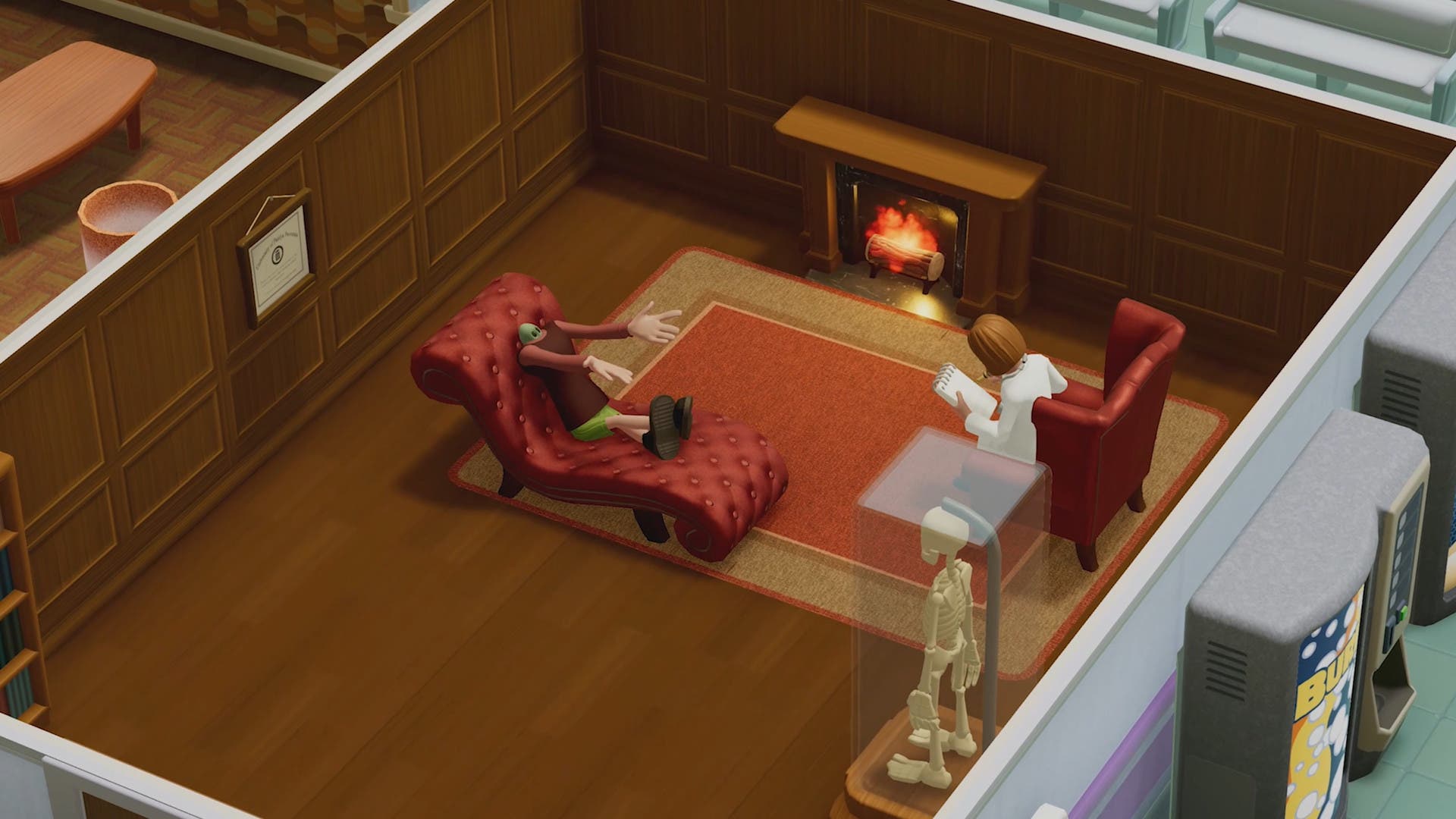 For those who’ve never played, this is a management simulator not unlike Cities: Skylines, Railroad Tycoon, or others in the genre. Two Point Hospital is a management game that’s complex but on a smaller scale, that is equal parts micro and macro management. You’ll need to take care of every square inch of your hospitals like your staff, patients, hygiene of rooms, and even temperature. As you eventually build out your network of hospitals, you’re becoming a prominent healthcare provider across different areas of the game. Two Point Hospital relies on three tent poles: build, cure, and improve. While it seems repetitious at first, the humor and zaniness is what drives the game forward. It won’t take long to know how and what to build from the start, and what to improve later on. There’s a direct understanding that you’re learning more about the game as you go.

Each hospital you start has a level and reputation. The hospital level is based on the services and space of what you provide, and the reputation is built by your staff and the patients that come through. Hospitals can also be given a rating, and is a means for progression in Two Point Hospital. Each town’s hospital can earn up to three stars, with increasing demands of objectives. Once you’ve reached three stars, you don’t have to stop. You can keep growing and improving the hospitals for efficiency. While only one star is required to move on to the next town, it’s best you stick around to deal with the more complex issues and demands. In all, there’s fifteen hospitals split across five regions in the game. As you venture to new cities to make a name for your hospital network, you’ll be presented with new issues – let’s say they are differently themed from one city to the next. One city is about being a teaching hospital, another is for college students, and another will be asking you to take care of patients from a nearby mountain who frequently get hurt, but also need radiators to stay warm. The variety in Two Point Hospital is exactly what it needs to prevent it from being boring or repetitive.

Two Point Hospital works on two different currencies: cash and kudosh. Cash is used to build your hospitals, hire staff, and bring in items that improve the quality of the hospital itself. Kudosh is currency earned from completing objectives that unlock career wide items that can be purchased with cash that ultimately improve the overall hospital experience. Things like snack machines, better couches, clocks, and conveniences of a news stand, and more. Over the course of running the hospital, you’ll need to upgrade your equipment to be more accurate and efficient. There’s a reason why they have fire extinguishers as an item to place, they aren’t just for decoration. Equipment can and will catch on fire, so having them nearby will be helpful so they can be fixed quickly and easily.

In later levels, the visual appearance of your hospital becomes a bigger deal. It’s easy to improve the look by placing plants, posters, or other things that meet the demand, in strategic spots. Demands are very important to pay attention to, as you’ll need to use the game’s heatmaps to determine if your staff is overworked, it’s too hot or cold, or plants are dying. You can drag employees where you need them, otherwise you’ll have to build new facilities or hire more staff to keep up with the demand. If you run out of space, you’ll need to buy plots of land which can ultimately make for a better hospital. Each extension can be a specific wing that has a different focus. Two Point Hospital doesn’t ask a lot of you, but it does expect you to keep paying attention. Nothing here can be left on its own for too long.

As you play, you’ll be hearing the soothing sounds of Two Point Radio, which happens to emanate out of Two Point County (I’m noticing a theme here). The announcer’s quips caused more than a few chuckles, and the music tracks are so subtle, that you don’t really notice it’s playing.

As new ailments are discovered, new rooms will need to be built. For things like, curing someone with lightheadedness who’s head is a light-bulb. Or taking a clown to be dehumorized. Conversely, staff will need to be trained for such times. Sometimes patients die, and come back as ghosts and begin to haunt the hallways of your hospital. Janitors can be trained, or hired with the skill to capture ghosts. Doctors looking for promotions should be trained on new medicine types that meet the demand. Not enough psychiatrists? Make some! Training in Two Point Hospital is almost a necessary element of the game. 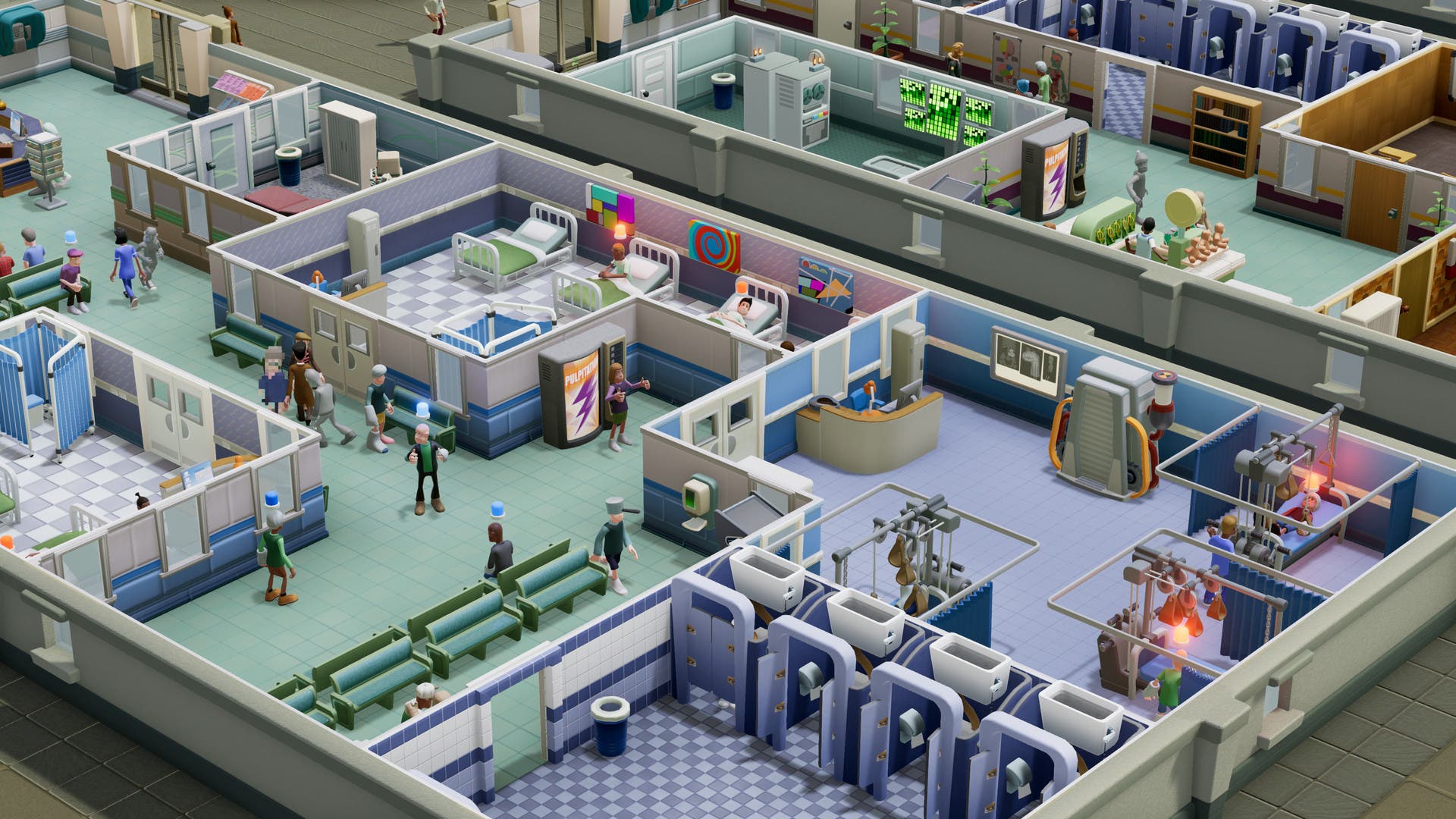 You have an inbox which houses a great deal of information, but also can tell you about upcoming visits from VIPs, the news, or the health inspector. Sometimes if cash is getting low, you’ll be reminded you can take out a loan to get your head above water. I never had to do this in my game, but the fact is there in case anyone struggles is a necessary lifeline. Each year, an awards ceremony is held, and if you’re doing well enough, will win at least one out of eight categories. This is such an ego booster when you see things are going well. It’s then you should start displaying a trophy case for all your patients to see.

There are three types of objectives in the game, constantly having you spinning plates and your budget. You have your normal objectives of working towards a three-star hospital, which is a feat all its own. Then, you’ll be given timed objectives, like a rush of patients with the some ailment, or a staff demand of having a better staff room. These things must be completed in a set amount of days, or you don’t get the bonus cash and kudosh. Lastly, there are community objectives whereby you compete with people on your Steam friends list to have a certain amount of cash, or heal a number of patients. The in-game leaderboards and running tallies and even pop-ups showing you how well or not well you’re doing against friends is an excellent motivator or bragging tool. This is what a Theme Hospital in modern day feels like. 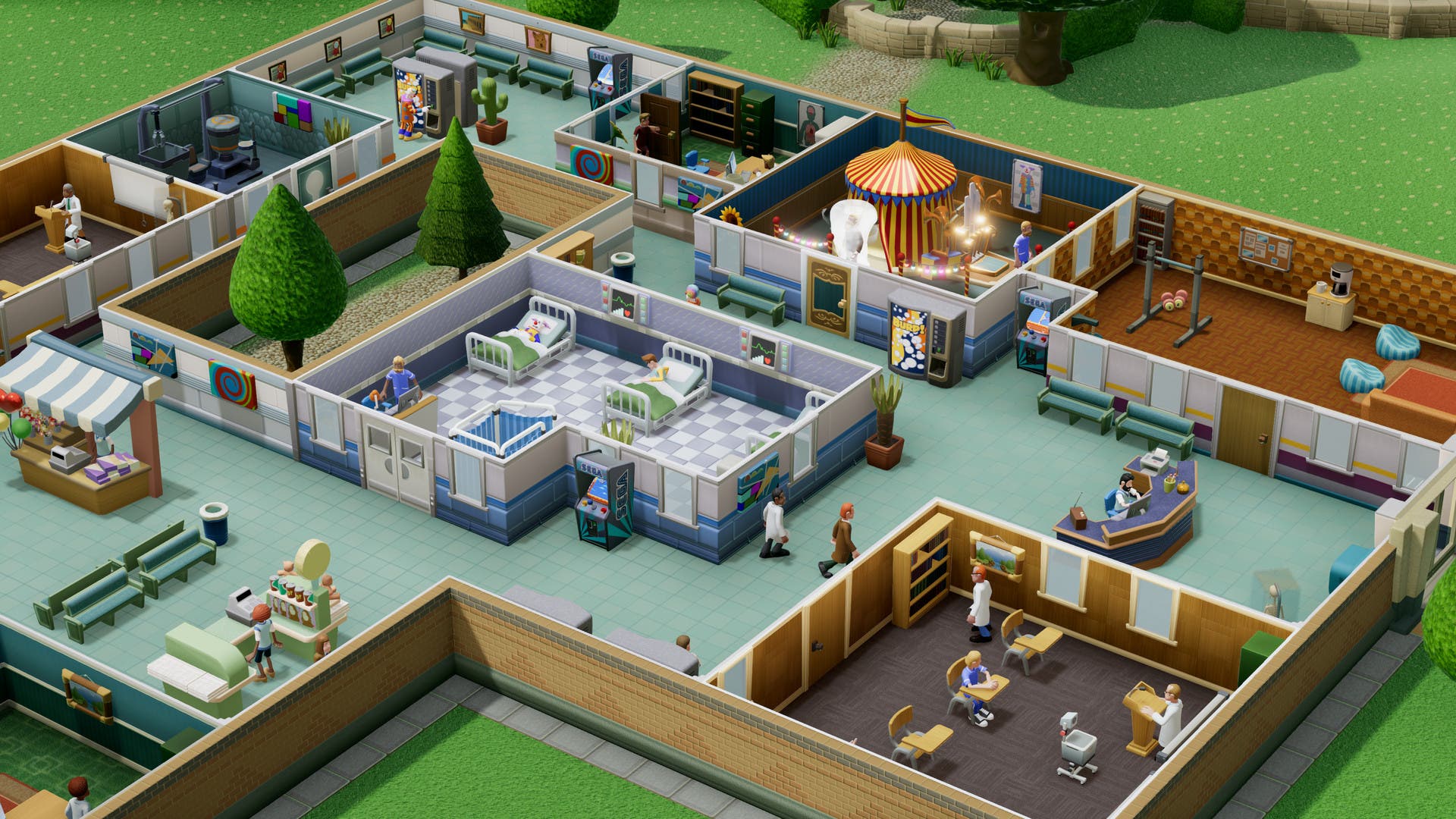 There are two kinds of bugs in Two Point Hospital: artificial and game-kind. There will be times, if your hospital falls to the unhygienic side, you’ll have to click scurrying monobeasts before any patients notice, and leave. This brings some interactivity and direction action back to the player. Other times, the game has issues and you’ll lose a save. Thankfully saves are compartmentalized between career, and individual hospitals. I did lose an hour or so of progress due to a bug that started placing staff members within each other in the same space, patients inside benches, and information boxes coming up blank. This invalidated my save for the hospital, and forced a restart of the level. While it is not the worst thing, I have seen this issue a couple of times, and it’s never fun as the only save you have per hospital is a quick save. Hard saves could’ve helped prevent more lost time. All in all, this was infrequent if not annoying, but did not hamper me one bit. I went right back and tried to be more efficient on getting back to where I was. 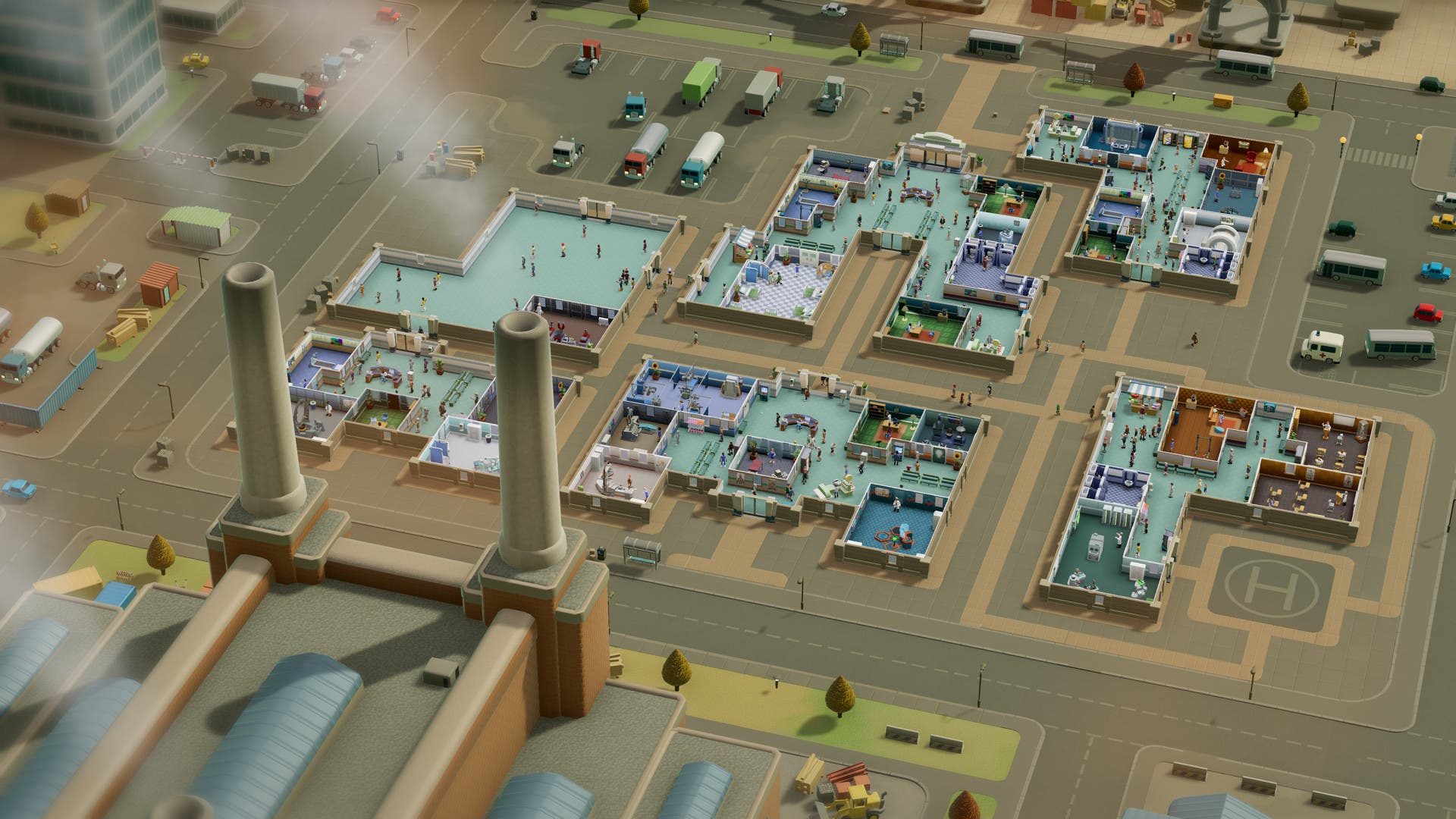