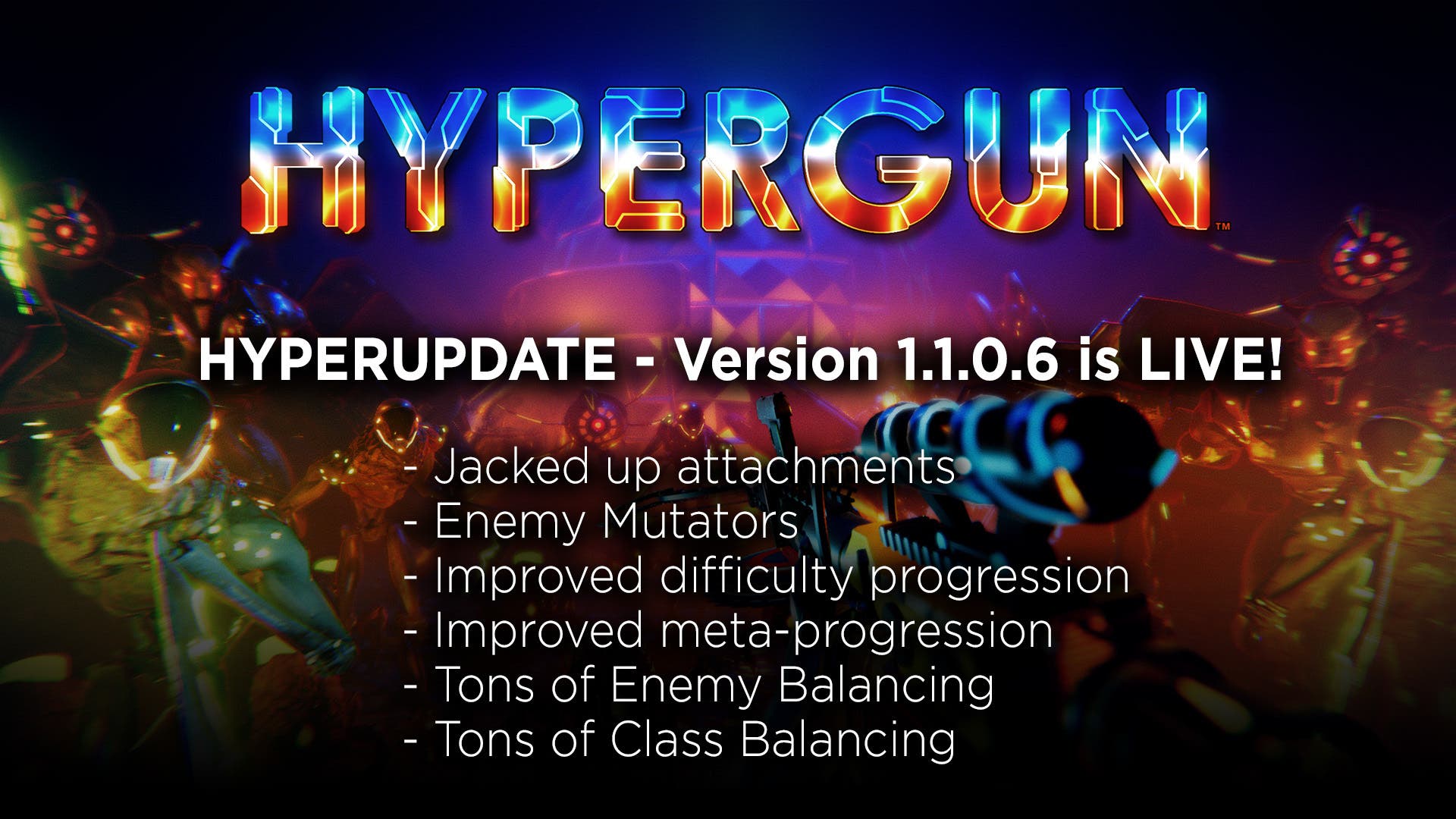 Happy Tuesday! We’ve got a very special treat for you – a HUGE update. This is going to be a long post, so strap in!

In the weeks since release, we’ve been keeping close tabs on the discussions, reviews, and streamers playing HYPERGUN get a read on the community’s thoughts. There’s been more than a few gripes in terms of balancing, for example – the weapon buffs weren’t feeling substantial enough, the difficulty curve wasn’t tuned quite right, and some aspects of progression were a bit grindy.

Even though HYPERGUN isn’t in Early Access, we wanted to do our best to address these concerns and get the game in as good of a place as possible! We put our heads together and came up with a few significant changes (and a whole ton of little ones!) that we felt would improve the game in a pretty big way.

One Attachment Per Slot

This is a big one. In the launch version of HYPERGUN, you were able to pick up an infinite amount of attachments. This was cool in some ways; you definitely got some crazy combinations by the end of the game!

However, there were some pretty big drawbacks that became clear after watching tons of people playing the game – the attachments didn’t really have that big of an impact individually, and the weapons ended up evening themselves out over time as positive and negative stats counterbalanced each other. After an hour of play, the gun usually felt like a mid-power machine gun, perhaps with some elemental damage, rather than being unique and distinctive.

After much deliberation and testing, we settled on limiting attachments to one per slot (so you can carry a maximum of 8 at a time). In doing so, we were able to drastically buff the values (especially on Golds and Platinums!) making each attachment you pick up much more significant. There’s now also an aspect of decision making and control over your build; since you can choose which attachments you pick up, it’s possible to prioritize certain stats, elements, or secondary fire modes. We’ve found in our testing that this makes the progression much more engaging, and ultimately gave us a better feeling of connection with our personal HYPERGUN.

To clarify – the attachments still drop randomly in the simulation as they used to. You still need a certain amount of luck to get a “perfect build”, but the RNG aspect is much more limited that it used to be with this new system.

This is another big point, which helps to make enemy encounters more varied. When spawning, enemies now have a chance of inheriting a bonus effect (indicated by a particle aura). The mutation chance increases as you progress further into the game, so get ready for some beefy endgame enemies!

Every enemy has had health, speed, damage, etc. values tweaked and massaged. Certain enemies are less bullet-spongy (looking at you, Mage), some are faster and more deadly (Shamblers!). The overall goal was to make sure each enemy was feeling dangerous in their own with, without being cheap or overly tanky. These changes keep the difficulty up, without dragging out later levels purely by nature of bullet-sponge targets.

We’ve also adjusted the levels at which enemies start spawning in. Previously, you’d encounter pretty much every enemy type by around level 3-4, and after that they’d just increase in number. This made earlier levels more intense, but not in a particularly satisfying way.

For example, The Lab now includes only Shamblers, Wasps, and Crawlers. In The Factory, we add in newly tuned Snipers and Fungi into the fray, and so on. This progression is much more gradual, while still maintaining a great deal of challenge throughout the experience (don’t forget, those Shamblers are a lot more deadly than they used to be!).

One complaint we had at launch was grindy progression. While it should take awhile to unlock EVERYTHING in the game, we also want you to be able to experience the content you’re interested in without sinking 20 hours into the game.

Hypercoin drop rates (and drop rates in general) have been increased, meaning you’ll collect them more quickly than before. Attachments in the Meta Shop have been reduced in price, as have Class Abilities. These changes collectively result in a much more consistent progression; every run or two you’ll be able to unlock some new toys!

Beyond all of that, there’s been a TON of other tweaks across the board. Class damage, fire rate, and energy cost have been massaged, Class Abilities have received a health balance pass, boss attacks have been tuned, and much much more. Find the full list below!

We hope you enjoy this update as much as we have been during testing. Now get out there and build some HYPERGUNS!