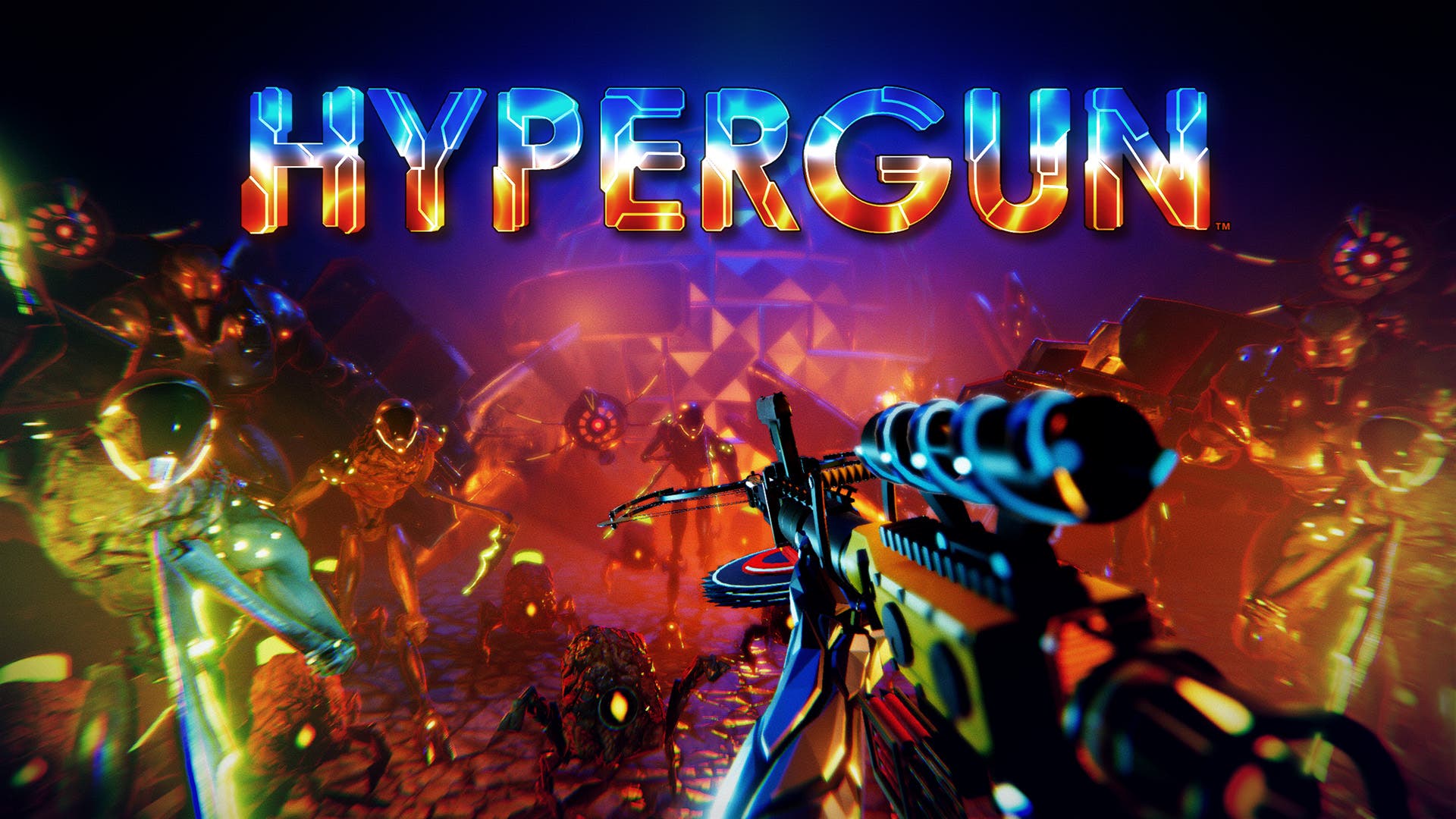 HYPERGUN comes from NVYVE Studios, and their roguelike first-person shooter is a stunner – both in visuals, and how some of its great ideas… falter. NVYVE Studios has made a game with vibrant colors like neon tubes were placed on every surface and enemy. It’s a roguelike, which means death will have you starting over with some permanence, and requires a lot of grind for little payoff. HYPERGUN makes a great first impression, but not a lasting one. Nevertheless, HYPERGUN gets by on its looks and charm, and has a lot of room for improvement thanks to potential patches and updates. 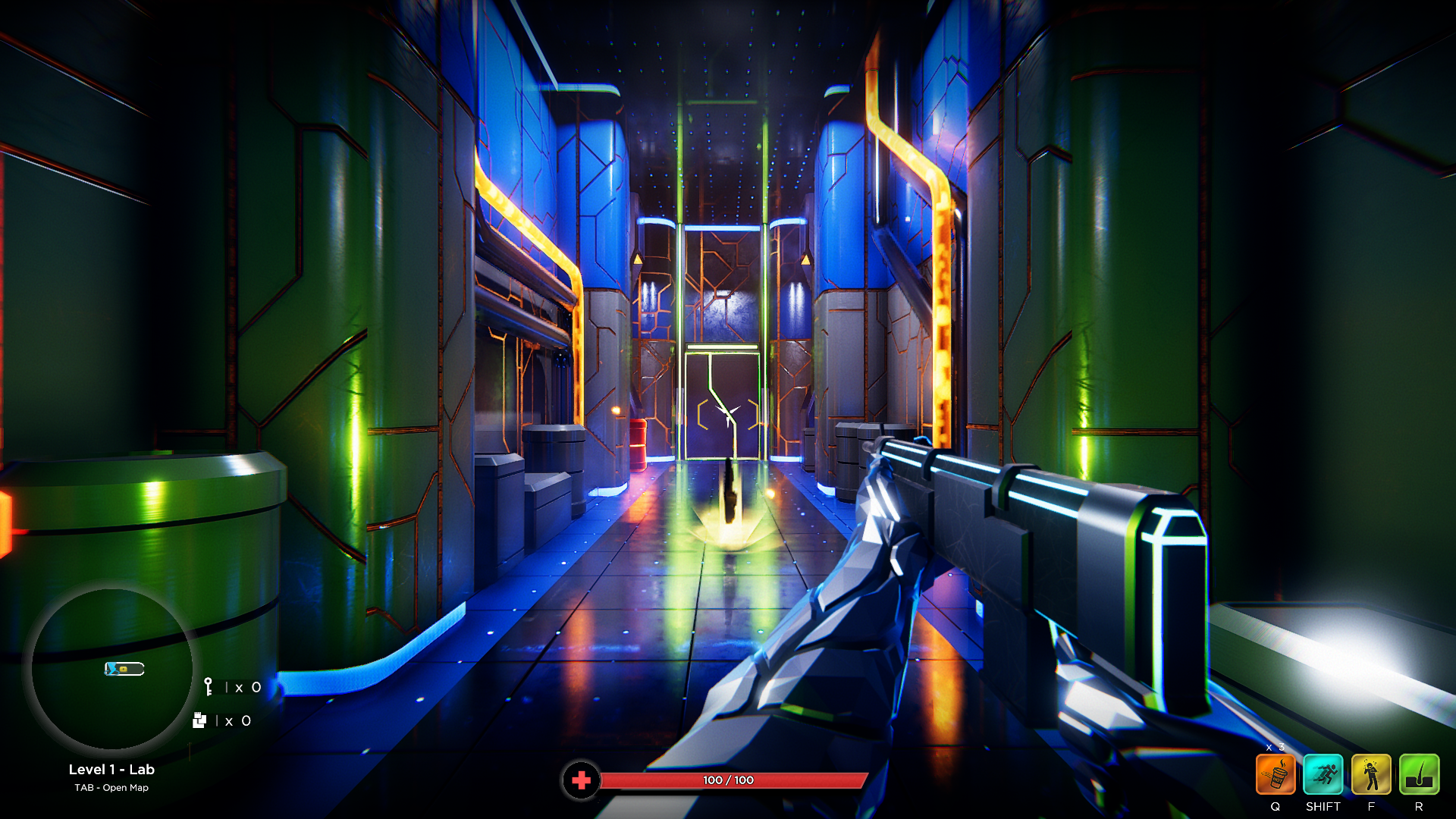 HYPERGUN starts off with you coming off an elevator. No setup, no preamble, just game. This does good to getting you into the action, if you want. You can first explore an empty office, read sticky notes scattered across the office, read people’s computers and tablets, and see what’s going on. You learn that you’re Dewey Owens, a new intern at DevTech Labs. You’re tasked to, “Build the HYPERGUN!” – whatever that means. In the sense of the game, it means going into the simulation that’s been built to amass a series of weapon parts that fit onto a gun, to be the most powerful thing created. Because, aliens have invaded Earth and until the right weapon is assembled to kill them, humanity faces extinction. So you send yourself into the simulation to build the HYPERGUN.

Each simulation you start is completely randomized, from the first weapon attachment you pick up to each of the level layouts. Since you’re playing as Dewey, you start with an SMG and there will be a random weapon attachment to pick up, and then you’re off to playing. There’s a weird hitch that happens on the first room when it gets going, but never becomes a problem for the rest of your time in that run. Levels are setup in a grid like other roguelike games, and you’ll be clearing room to room, finding stores, bonus areas, and the path forward to the boss. Sometimes you’ll be able to uncover the map if you explore enough, and it’ll tell you where chests are located. As always, it’s best to explore every room before going onto the boss so you can get every benefit you can. Attachments are a vital element of the game, providing boosts to fire rates, damage, elemental damage, movement speed, and more. Stacking attachments is crucial to building the HYPERGUN.

The difficulty of HYPERGUN will be off-putting for many. There’s a fair amount of grind in order to feel any sensation of progress. There’s only six levels to work through, but a clear run takes an incredible amount of time to do so. It took me almost two hours to complete the game, which is no easy feat, and one I believe to be luck. The kicker is that there’s no checkpoints or saving during a run. The game either needs to be shorter, or allow saving at some point, given the time needed to invest into it. I can see why certain decisions were made, as to not make the game seem too easy or short, but it’s disheartening. I’ve only had a clear run once, and I’ve never been able to do it again. There’s a lot of RNG as it were, and I can’t imagine people are going to have the patience for this unless saves or checkpoints are put in place. It’s exhausting completing an entire run, and it shouldn’t feel that way.

The game is hard enough from room to room, let alone level to level. But then there’s the issue of the horribly designed bosses. First, they have exponentially more health. For instance, the first boss has 2000 health points, and you may have somewhere around 100 health – this is more or less fine. But the issue presents itself as you go further in, your health never grows to be proportionate, making the gap worse as you advance. When you encounter a later boss known as The Twins, they are two bosses that share a health bar. When you “kill” one of them, the one that “died” stays there and continues to fight but stops taking damage. Only the boss still alive will take damage until beaten. This is extremely unusual, as in other games, when you exert one of two enemy’s health, they usually die and are no longer an element of the fight. Later, there’s a boss who spawns tons of enemies on you while you try to destroy its center. This one is not so bad, but it is very overwhelming feels carelessly put together. I will say, that the boss designs outside of these quirks are extremely entertaining with the music track that backs these fights, and they each have their own pattern to follow. I just wish these fights weren’t so cheap and lengthy. 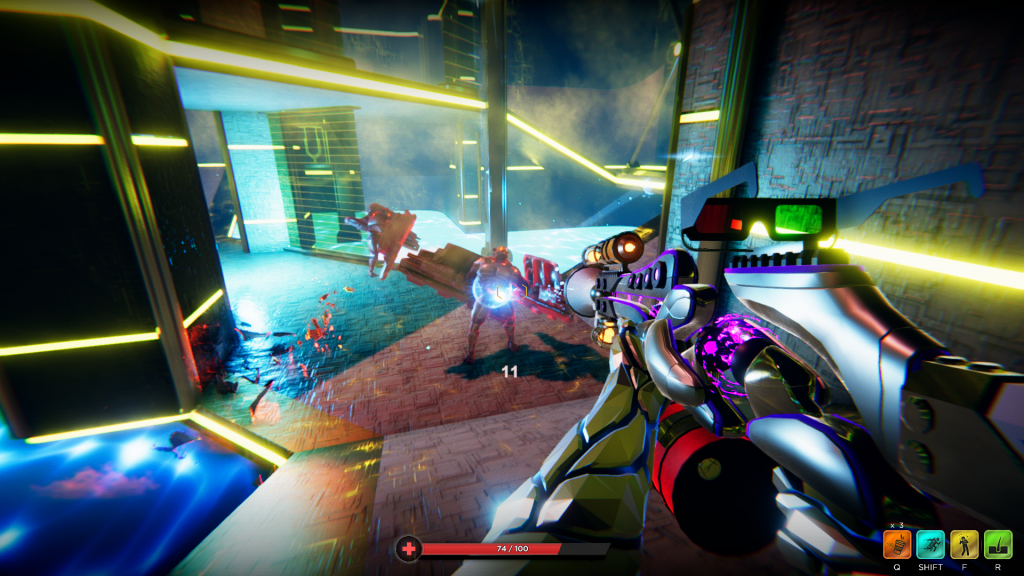 Dewey isn’t actually the only character you can play as, there’s three other unlockable characters with unique traits and weapons. These characters are treated as different classes. First there’s Dirk Smith of Security who has a rifle, Gilligan Gold from Legal who has a shotgun, and lastly there’s Sue Sharp from Human Resources who brings a sniper rifle. Each character’s weapon is exclusive to them, but locked behind in-game currency.

Hypercoin is a currency in the game used to purchase attachments that become drops in the game, or for new classes. A single run from level one to the final boss provides barely enough Hypercoin to unlock a single character in a run. Throughout the pre-release review process, I’ve seen patches improve the drop rates, which has been for the better. But when you factor in the cost of everything, it needs to be even better than it is now. For example, there’s 12 skills per class at 20 Hypercoin each. That’s 240 Hypercoin for one class, and 960 Hypercoin for all characters. Not to mention the shop outside the simulation, that’s easily 14 hours if you are able to complete run to get roughly 50 Hypercoin each. The game asks you to do so much work very little reward.

There’s another currency in the game, and that’s in the form of bits. Bits allow you to earn in-run money to spend in the in-run store. These do not accumulate or save beyond the current game you’re in. So having two currencies is extremely smart, as you’re never feel like you have to save them for later. You need to spend them often. Bits let you buy keys which can unlock certain chests. Or you can buy health or shields, or even an attachment. Bits are mostly unimportant, but serve their purpose if not forgetful to the experience.

HYPERGUN has a lot of stat tracking. The game is tracking everything, from time spent with each class, how many enemies you’ve killed, how many times you’ve died. There’s even stats for how many keys you’ve found, bits collected, and chests opened. With rooms for you to read every note and computer to reviewing the databank which houses all the weapons and monsters you’ve come up against. Instead of being a menu item, NVYVE Studios thought to put explore it in 3D space.

Visually, HYPERGUN is astounding. The options therein are pretty standard, but the standout settings are the ability to change the render settings: Normal, Pixel, Retro, and Painterly. Pixel makes the game look like Doom, and Retro is more like Quake. Painterly is very soft, and smooth looking. Overall, the game looks incredible, and the saturated neon 80s look is quite the aesthetic. This is easily the most enjoyable part of the game, and what will draw people to it.

On the sound design, this could be improved. There’s a litany of sounds at any one time that is harsh on the ear. There’s too many overlapping similar sounds that just sound like metal grinding on metal with a baby screaming in the background. Then there’s the issue of the repetitive soundtrack. While I enjoy the songs themselves, being a game where you die often, hearing the same songs that are attached to specific levels and bosses gets tedious, and you never hear the later tracks like you want. The soundtrack is comprised of retrowave artists like Carpenter Brut, Sung, Nightstop, Starcadian, Street Cleaner, and King Stephen – and it’s worthwhile to get the soundtrack separate.

HYPERGUN is oddly most enjoyable when you’re not doing a complete run. The further you get in the game, the more exhausting it gets, and it’s absolutely frustrating to make it so far and lose to cheap bosses. HYPERGUN is impressively deep yet unrewarding. NVYVE Studios defies convention and bucks trends for all the wrong reasons. I believe these issues can be fixed via patch or update. This is a case where you want to believe the game is better than it is. As it stands, the current state of the game is unbalanced in the game’s favor and simply not enjoyable over a long duration. HYPERGUN is worth playing, but not in its current state or price, even if it feels somewhat modest.