Mode 7 is back with Frozen Synapse 2, a sequel two years in the making, and seven years demanded by the community. The original game was a throwback to classic tactics games that stripped away all the noise. Frozen Synapse 2 looks simplistic, but it’s color-coded gameplay bathed in neon and wire-frame gives all the visual information you need to make tough decisions in and out of combat. Commanding squads of clones to keep the city from self-destructing is spinning plates while riding a unicycle that has a flat tire. Frozen Synapse 2 is a well-executed game that improves on everything over the original, and is always satisfying when a plan comes together – and even when it doesn’t. The biggest change to how Frozen Synapse works, is that there’s now a city map that serves as a hub area to have discussions with employers, track territorial control, and send your elite squad of clones on a never-ending series of missions. Each new game you begin breeds a procedurally generated version of the city. This city constantly feels like it is at the brink of chaos, and the city of Markov Geist gives Frozen Synapse 2 its sense of place that previously didn’t exist. The story is light, but your actions of first game are recognized categorically, not personally for the player. Frozen Synapse 2 seamlessly blends being a simultaneous turn-based tactics game in combat, and a strategy game for decisions made in the city view.

You have a choice of starting the tutorial, which is highly recommended, or a city game. The city game is the core of Frozen Synapse 2. It is a campaign and a skirmish mode all rolled into one. Alternatively, you can play multiplayer as well. Starting the game, you’ll learn who the bad guys are and how to counteract them. All events can be ignored, except if they are red. These are critical and must be dealt with. Everything action in the game has consequences, good or bad, like dominoes falling. Time advancement has a role here, allowing you to skip things and move things along. The city view also lets you view different heatmaps of control for each faction. When a faction attacks, you’ll send your clones in. Over time you’ll be setting up bases in different parts of the city that make it easier for you to deploy from, reducing travel time and unnecessary deaths.

Each combat encounter will have you testing a plan. The planning phase can be compared to the original Rainbow Six games where each step of each squad member is planned out. Mode 7 takes that even further, to control orientation, placement, stance, and focus of each unit deployed. Turns can take one of two forms: normal or long turns. Normal turns last 5 seconds, no matter if each player has finished completing all their planned movements. Long turns will wait for all units to reach the end of their plan. You’ll be giving detailed and precise orders. The right-click menu of choices for your units is impressive. You can: add waypoint, aim, cancel aim, check, engage on sight, engage and stop on sight, continue on sight, duck, stand, wait, focus on zone, focus on enemy, ignore enemy, ignore zone, clear focus/ignore, pick up item, drop item, exit mission, ignore unaware enemies, or delete selected. These list of items aren’t to intimidate, but empower. This level of control ensures that you do exactly as planned, whether that’s to your favor or not. You can infinitely test your plan, but once you PRIME your plan, it will execute without any further changes. It is here you get to watch the outcome to your success or dismay.

Other aspects to consider is the use of cover and aiming. Cover is advantageous to friendly and enemy units alike. If you have a unit be crouched, you have to cancel that action for them to stand back up for movement needs to avoid gunfire or other needs. The focus diamond introduced in Frozen Synapse 2 is a welcome addition, allowing you to focus your fire in a specific are upon seeing an enemy or entering a doorway. The last thing to consider is the environment. Each level you play is less blocky and features rounded corners which change combat dynamics for the better.

While the lack of a skirmish or one-off scenario quick games are missed, Frozen Synapse 2 is not about that. The focus of the city mode is incredibly satisfying and has elements of a board game in video game form. This grows on you rather quick, and you won’t miss what’s not here. Though, there are improvements I’d like to see, is the ability to set your scroll speed, as the default zooming speed with the mouse wheel is far too slow. There’s very little to complain about here.

There is multiplayer, and of the few games I got in, is really tense. There’s the original multiplayer mode that existed in the original game. But now, there’s a one turn mode, which is exactly that. You set your plan for only one move without knowing the other player’s moves. Then you let loose to see the ensuing incursion. Frozen Synapse 2‘s backbone is not the city game, but the chillaxing instrumental cyberpunk music from nervous_testpilot. This soundtrack is exceptional, in and out of game. This is a soundtrack you buy separately. 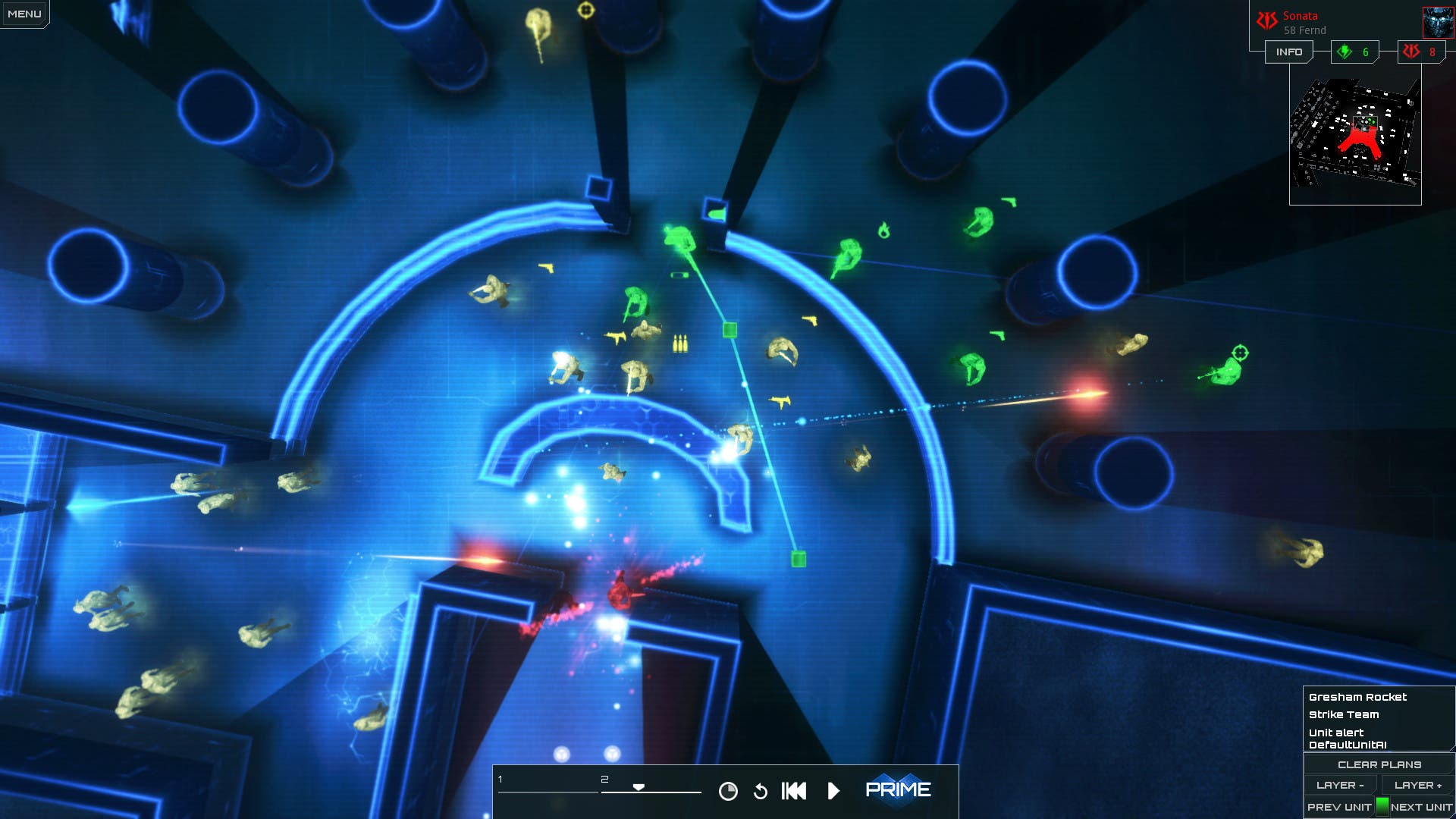