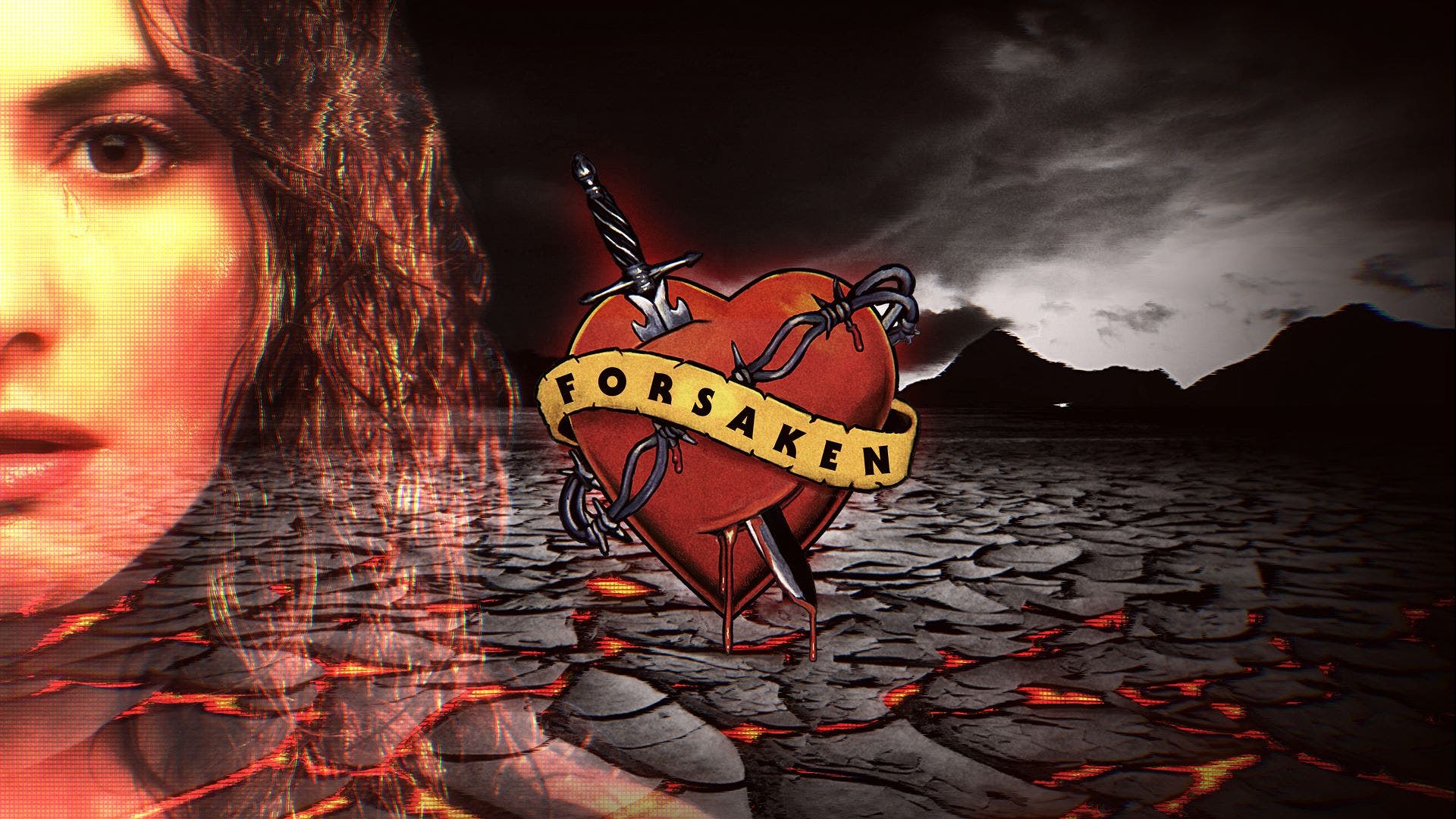 Thinking back to PC gaming in the late 90s conjures up a flurry of memories filled with low-poly models, gratuitous use of colored lighting, and a heavy emphasis on extreme everything from speed to attitude, explosions to bigger explosions. In many ways, PC games at that time were a near-perfect distillation everything that media and marketing of the era were pushing on audiences; only 90s kids will truly remember the feeling of literally everything being IN YOUR FACE all the time, and that’s probably for the best; nobody else should have to carry that with them. 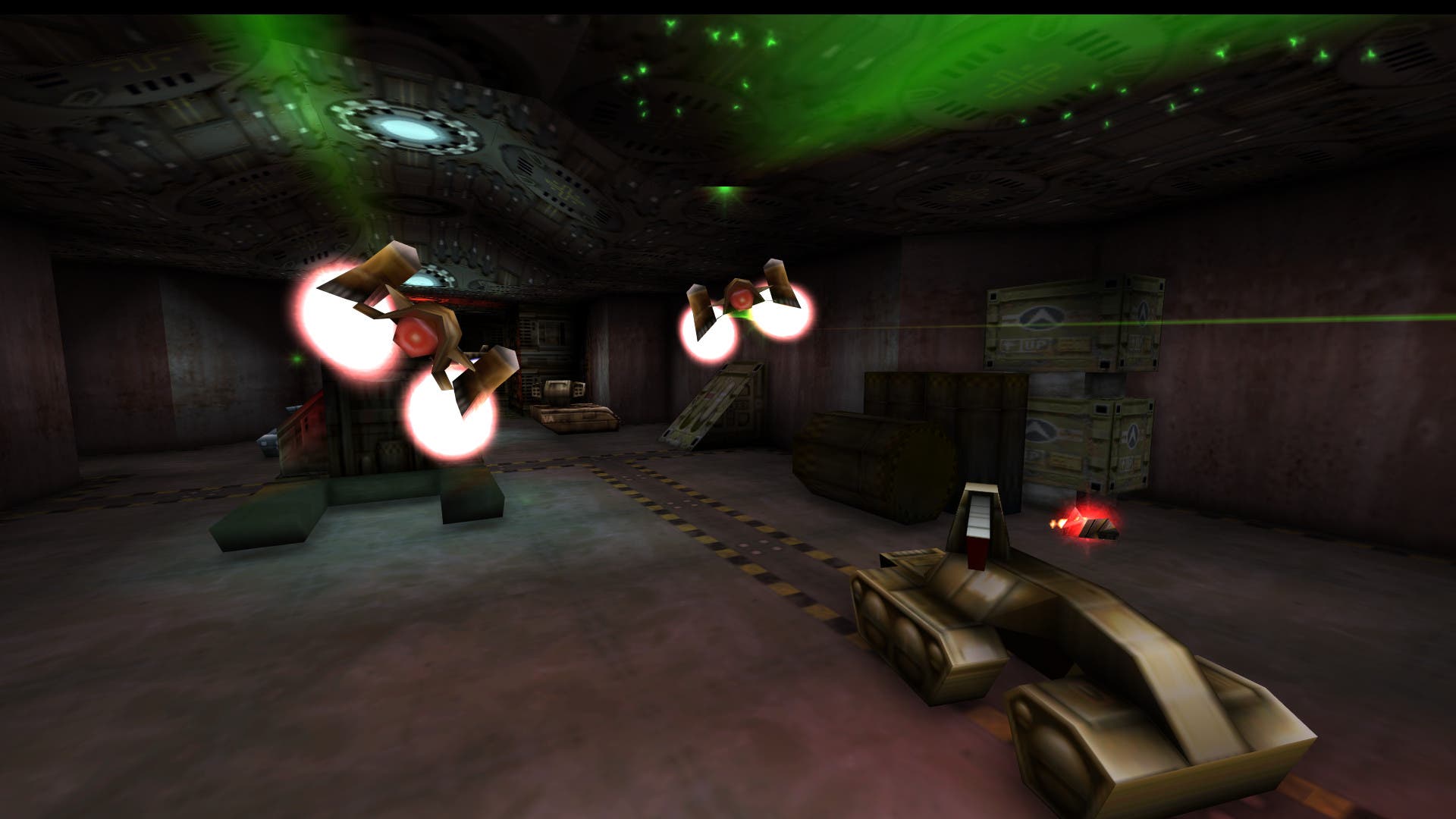 I never played Forsaken when it originally released. I was firmly entrenched in Half-Life and Counter Strike at the time and could not be bothered to look elsewhere. However, I do remember the print ads for the game, as anybody with a gaming magazine subscription at the time probably does; it literally told you nothing about the game itself and was an obvious play to sex appeal for reasons I still don’t fully understand. Not knowing what the game actually did have going on for it, I never bothered to pick it up.

Now here we are in the glorious age of game preservation, and along comes a lovingly crafted and incredibly well built remaster of what I am now able to say is one of the era’s better games. It’s important to note that this is not a port, nor some old code shoved into a wrapper to make it run on modern machines. This is a full rework of the game’s assets inside of a revamped engine designed to run and function the way 3D engines worked when the game was originally made while taking advantage of present-day computing power.

The result is a rare and exciting tour of a game in its ideal state, unfettered by the limitations of a family PC built for AOL, Quicken and Mahjong. This is the experience you were meant to have on a RIVA TNT or a Voodoo2, a whopping 64MB of ram and a blazing fast 450MHz Intel Pentium II. Unsurprisingly, I think this remaster is probably the best possible first experience one could have with Forsaken.

For the uninitiated, Forsaken is a six-degress-of-freedom shooter and tunnel crawler; if you’ve ever heard of or played Descent, or perhaps more recently Sublevel Zero, then you know what to expect. If not, here’s the jist: you pilot a specialized craft (in this case, a hoverbike) that can move seamlessly in any direction with the same velocity, as though you are unbound by the laws of gravity. You fly through levels exploring mazes of narrow tunnels in search of power ups, treasure, and ultimately an exit, killing all manner of enemies along the way. Some enemies are firmly grounded, most others can pursue you through the air; your primary advantage is that you’re extremely fast and their AI is not particularly sophisticated.

The gameplay loop is straightforward; you explore, you collect, you shoot stuff that shoots at you, and you get to the exit so you can do the same thing in the next level, your arsenal growing ever larger. Levels are sometimes given some artificial drama with a countdown timer (which is never actually a threat), and there is some good environmental design to provide interesting obstacles and exciting sequences, with some simple puzzle solving sprinkled in for good measure. Ultimately though, this is a game focused on going fast and making lots of things blow up, and it excels at both. 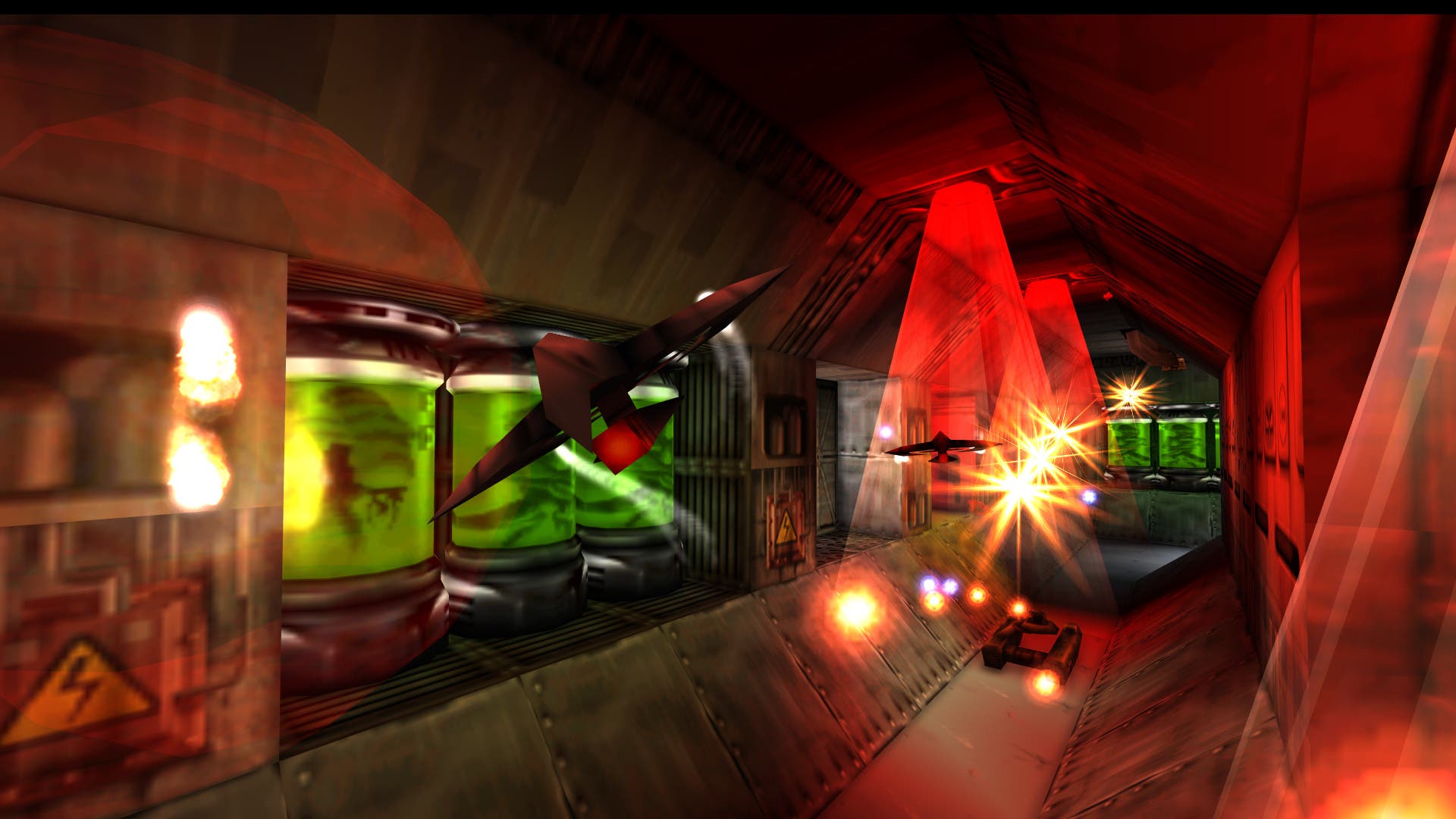 With respect to the speed of the game, it’s no Quake III: Arena, but make no mistake: this game is quick. It wants you to move through its levels fast and you always feel like you’re flying through corridors with ease, even after you overzealously crash headlong into a wall and come full stop for the twentieth time. (The frequency of that goes down over time as you get better, unless you’re me and find the notion of braking utterly repulsive.)

The controls feel excellent on both a controller or mouse and keyboard, and you will quickly master the movement so that by the time you finish the first level, you’ll be zipping around corners, snapping a quick 180 degree rotation and flying backward to take out a pesky pursuer, and pulling off tight zigzags as though Forsaken is the only game you’ve been playing for 20 years. 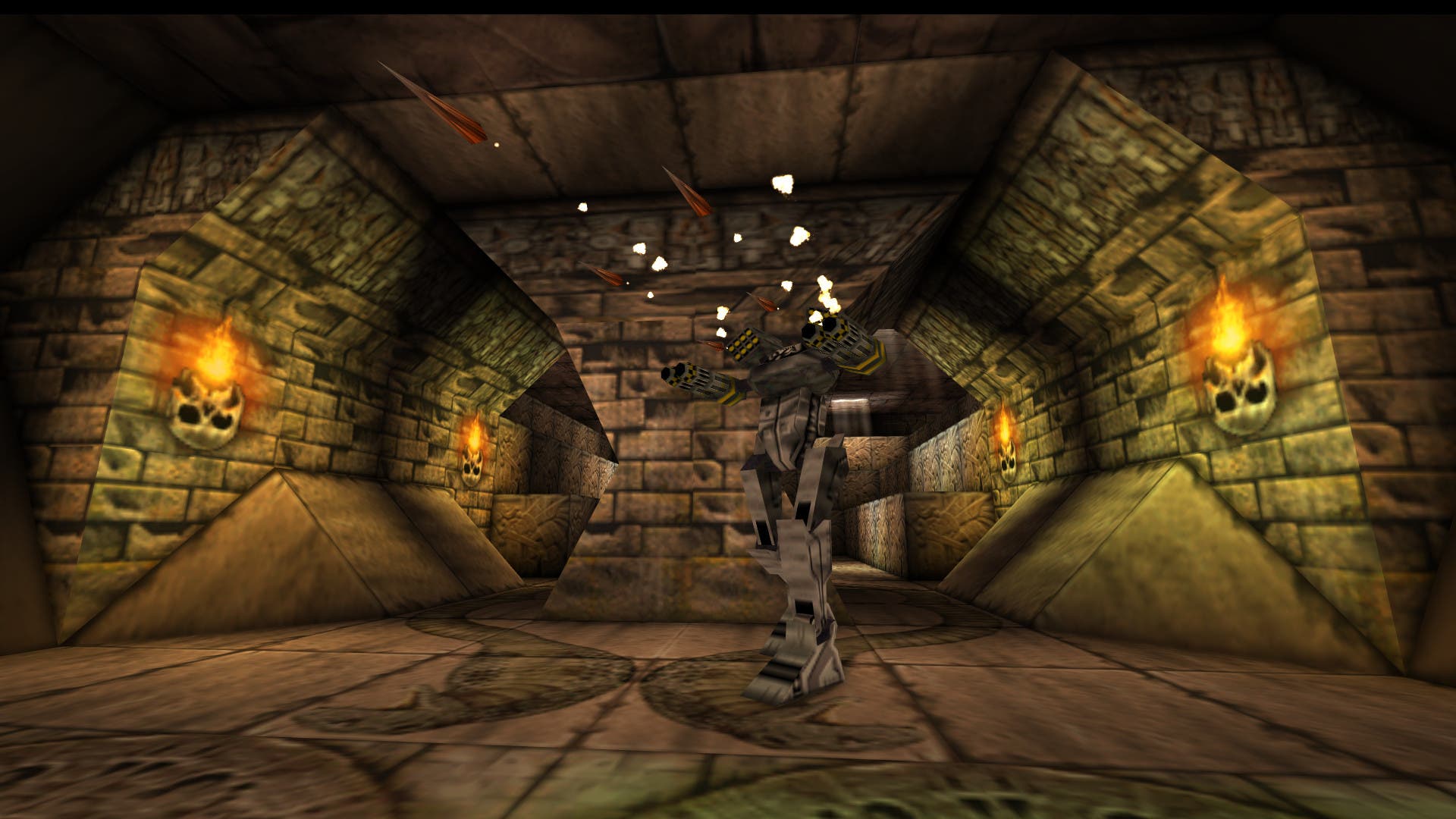 One of my favorite aspects of Forsaken is the variety of weapons available; like any decent shooter from the 90s, there is a wide array of things that go “BANG!”, from miniguns to lasers to pulse beams to mines to miniature nukes. In a time when weapon variety in games meant “how weird and unrealistic can we get with this stuff?” Forsaken was no slouch. Dividing your arsenal into guns (primary) and missiles (secondary), you are never without a host of options to play with.

The game also comes with the multiplayer mode, complete with a robust suite of maps from the original game to choose from. I spent some time in a few matches across several levels with Scott and we had way more fun than we were expecting. The underlying netcode works great, and playing Forsaken multiplayer transported me back to the age of LAN parties in my buddy’s basements in High School. 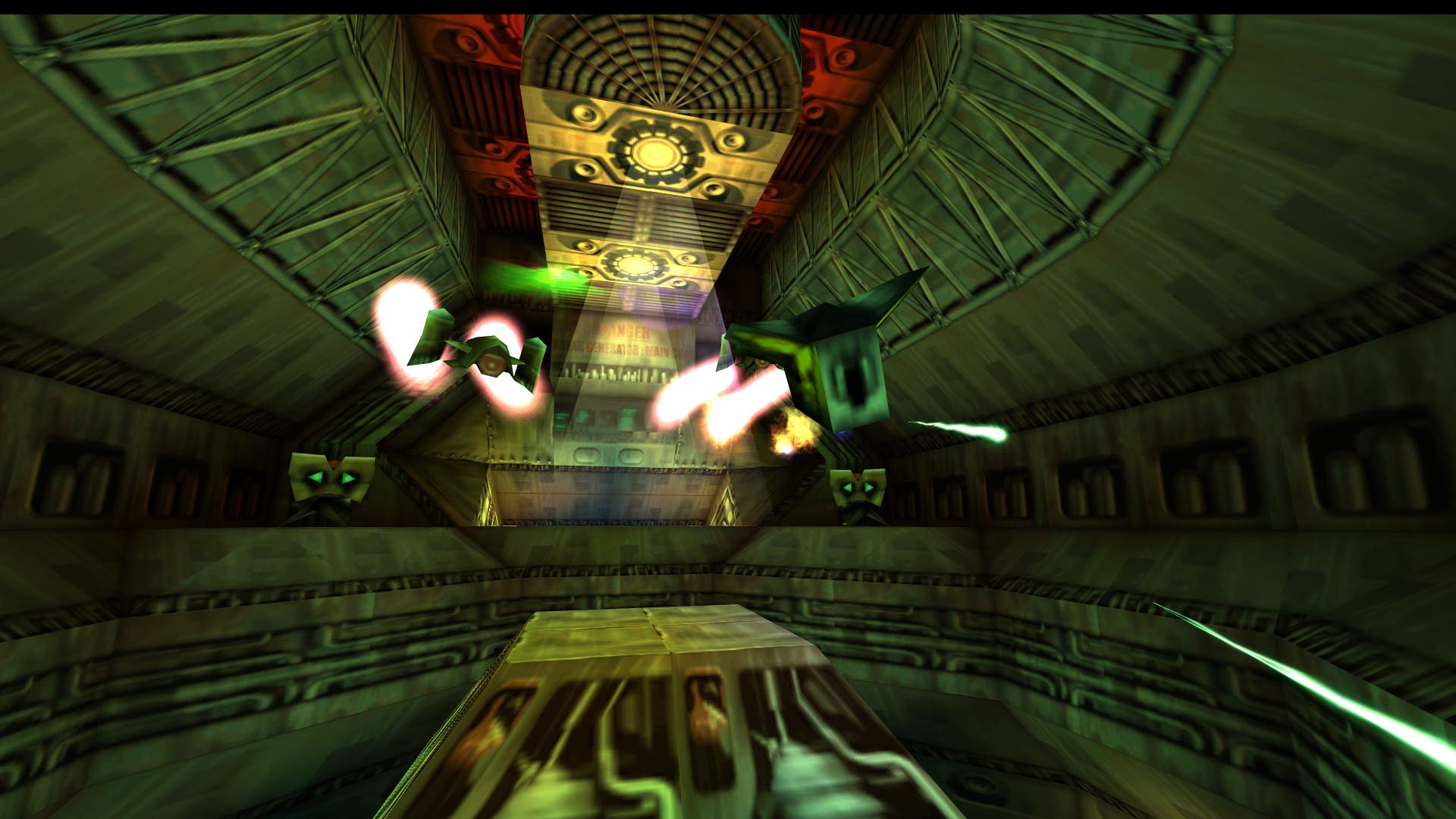 There is something really special and unique about the fast-paced, quick cornering, reflex shooting style of deathmatch that Forsaken brings, and in the right level a typical shootout can turn into a high speed chase replete with traps, throwing feints and trying to find moments to turn the tables on your pursuer, all the while trying to stay out of their crosshairs. It feels fresh and fun in a way that’s surprising, given the current heavy focus on military shooters with realistic ballistics and gunplay; as it turns out, all the realism in the world can’t replace the whooping, hollering, laugh out loud moments you get from the simplicity and freedom on offer from a game like Forsaken.

The thing that I really want to point out here is that experiencing all of this in a way that still feels fun in 2018 simply wouldn’t be possible without the painstaking work of the crew at Nightdive Studios. The time and effort they’ve put in to writing this engine and ensuring the assets look great even at high resolutions is beyond impressive. Naturally, the expectations around a twenty-some year old game running on modern hardware is that it should run well, at a level of performance far beyond what was possible when it was originally released.

That is of course true here, but it’s important to understand that the way games like Forsaken made system and hardware calls was very different from today’s games, and that means they can still be demanding in ways you wouldn’t anticipate. This problem could be solved by re-engineering the game with a modern set of tools (like Unity or Unreal), but doing so would be trying to recreate and imitate. Instead (as I understand it) Forsaken Remastered uses the custom Kex engine to re-implement the original behavior in a way that combines the best of both worlds; more or less “original” code running so that the all of the developer’s intent remains intact, in a way that can interact with modern hardware. As such, the performance is screamingly fast and everything looks and feels great. Of course, models are low-poly and blocky, and textures, though crisp and clear, are not nearly as detailed as what you get in a contemporary game, but this all ensures the game remains faithful to its roots, and that playing it feels like what you remember Forsaken and games of the late 90s looking and playing like, rather than the muddy reality of how things actually were. 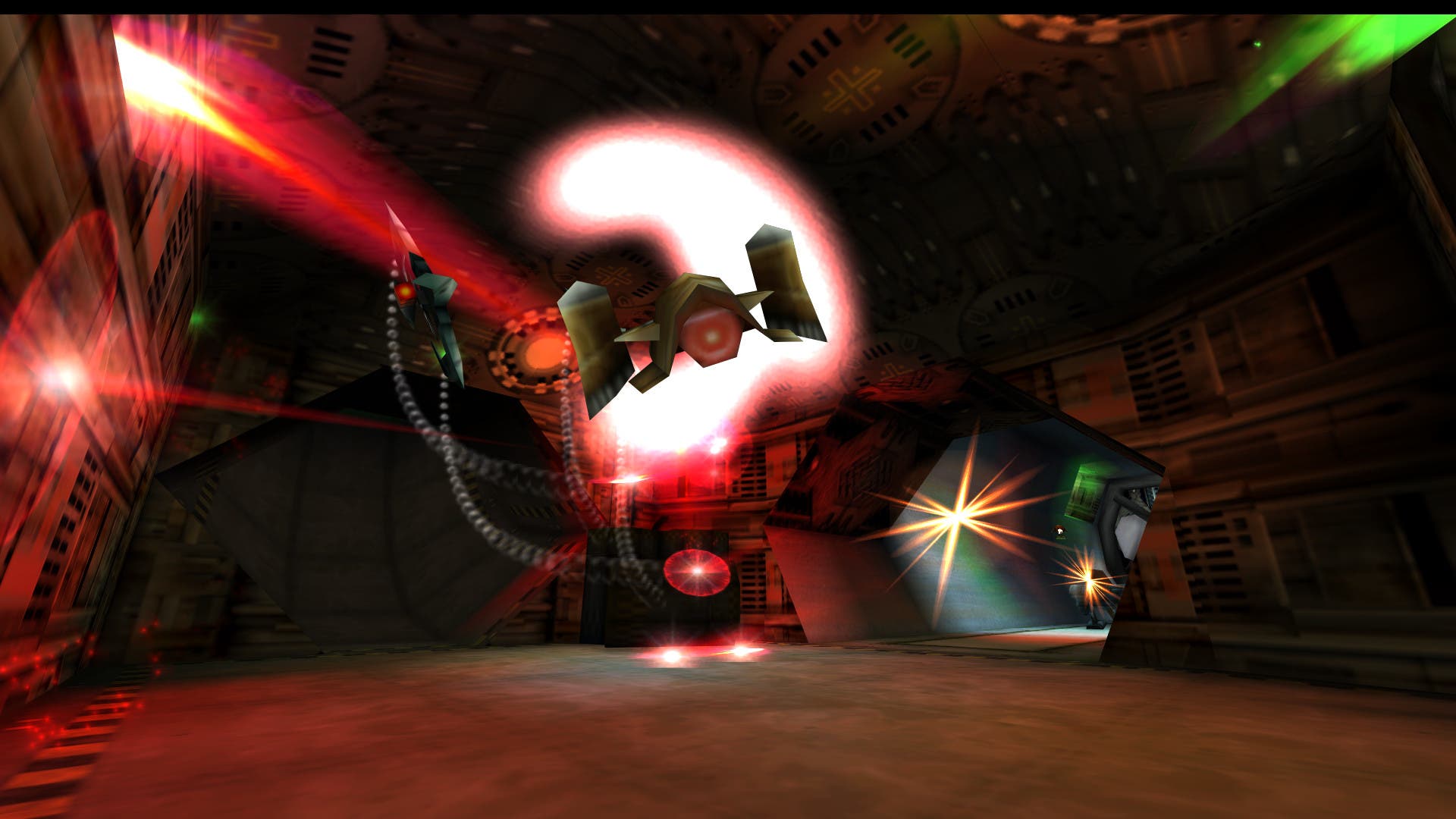 To put it succinctly, Forsaken Remastered is the complete package. It is a heavily faithful adaptation of a classic from an era when PC games were still getting their 3D sea-legs and experimenting with the format, and the feeling of playing games from that time remains alive and well within it. More importantly, Forsaken Remastered sets the bar for what remaster projects of old games should be in terms of looks, feel, performance and content.