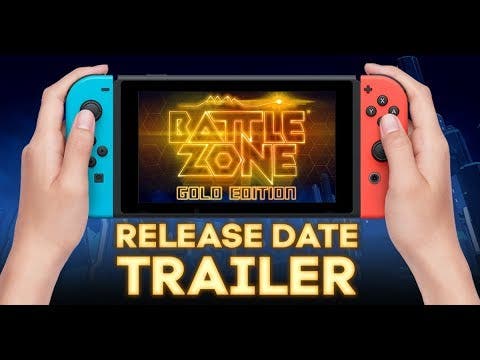 BATTLEZONE GOLD EDITION, Rebellion’s acclaimed reboot of the iconic 1980 arcade game, will be playable on Switch consoles worldwide on November 8th. It’s available to pre-purchase on the eShop right now with an exclusive 15% discount!

Battlezone Gold Edition on Nintendo Switch features cockpit motion controls, support for both online and wireless local co-op play, and ALL the content ever released for the game including bobbleheads, tank skins, and the retro-infused Classic Mode.

Battlezone Gold Edition transports you to the cockpit of the most advanced weapon ever built – the Cobra tank. Experience thrilling first-person combat across neon-lit sci-fi landscapes. Fend off legions of mechanized bots, from laser-blasting tanks to destructive mine-laying trucks and nimble airborne hoppers. With foes surrounding you at all angles, unleash an incredible arsenal of destructive weapons and special equipment. Customize your tank to utilize everything from laser-guided missiles to mortar cannons, and powerful shield boosts to devastating EMP blasts.

Tackle an explosive “rogue-lite” campaign that never plays the same way twice, playable in singleplayer and in drop-in, drop-out co-op for up to 4 players. Earn upgrades and preserve your lives as you defeat a wide variety of missions across the procedurally generated campaign map. Make your way to an epic final fight at the volcano, defeat the totalitarian Corporation and save humanity from the brink!