Party Hard 2 does just about everything right. It's a game of skill, strategy, and patience. It can also be frustrating with its increased difficulty, and can be off-putting, especially when you've completed most of the objectives and an ill-timed move spells disaster. Party Hard, a game I absolutely adored, is simply outdone with Party Hard 2. Every aspect and mechanic is improved over the original for the better, making Party Hard 2 a must-play.

Party Hard from Pinokl and tinyBuild was released three years ago, and it’s a game I loved and continue to sing its praises thanks to its unconventional approach towards stealth and design. Even with a sequel, there’s no partnership with Andrew W.K. still. Though, Party Hard 2‘s motto would be most definitely be “Ready to Die”, as there’s a higher body count this time around, and is a bit more difficult towards you as you try to kill the party. Party Hard 2 might as well have a subtitle of “Party Harder”, because this game is bigger, bolder, and deadlier than its predecessor. 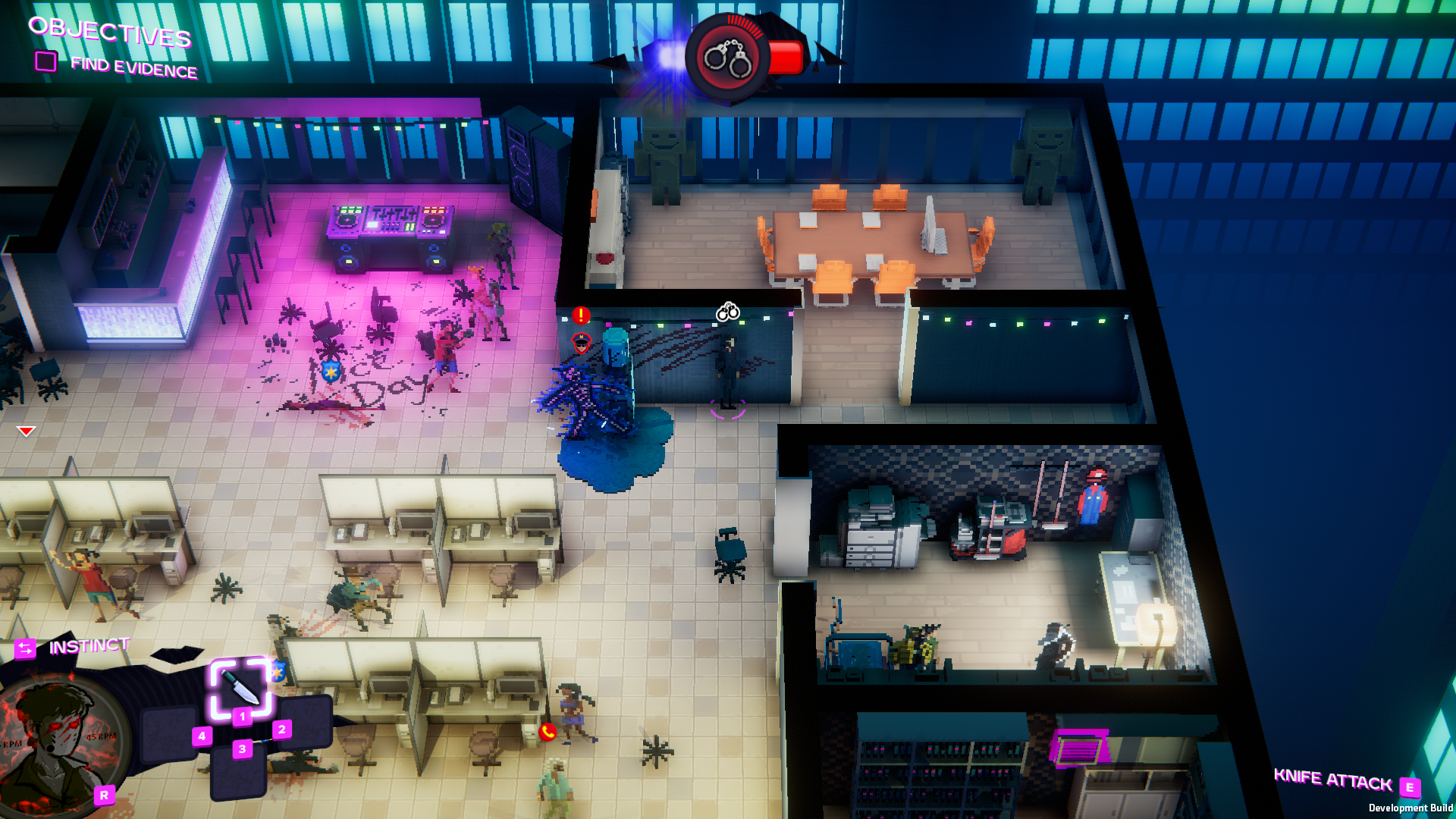 The big change-up with Party Hard 2 is the ability of playing as one of four killers, and not just the titular Party Hard Killer. The second character, Wannabe is almost a throwaway as he is exempt from achievements and unlocks when playing as him, due to his buffs to health, but is more accommodating for newcomers. Then there’s Kao Tech and Shawn O’Panda whose abilities and trade-offs I won’t reveal. No matter who you play as, the story continues from where Party Hard left off, if not with some ambiguity and mystery. You are recanting events and parties where the Party Hard Killer struck, leading up to an interview. While the narrative has always been veiled in mystery, the presentation is what really works.

Playing Party Hard 2 requires more thought from you than the first game. This time, the focus is more on stealth like a top-down HITMAN, and less on letting you make mistakes. All playable characters are fragile, and not quick, and are susceptible to death or being arrested easily. It’s a stealth combat puzzle you have to put the pieces together for. Pinokl has done a great job to give you all the tools and making its systems easier to understand. Party Hard 2 takes a few cues from HITMAN, and offers a party vision mode which highlights enemies, targets, and objects you can interact with. It can’t be used while moving, so you should only use it for a quick glance at your surroundings. There are now objectives to complete. There are traditional objectives that focuses on the targets, optional ones like killing everyone in a level, and even hidden objectives you don’t know what they are until you replay the level and try different things. Completing a level now feels more satisfying and rewarding than ever, as you have to be more thoughtful with every encounter. The Party Hard Killer, for all his efforts, still has awful lung capacity for sprinting. And now, he’s no longer socially awkward as his dancing now draws a crowd and cheers, rather than repulsing. Everything is so improved here in the sequel, and it doesn’t stop there. Progression really wasn’t a thing in Party Hard that I was looking for, but with Party Hard 2, I can’t imagine it without it. There are four styles of progression based on how you play the game: criminal, anarchy, stealth, and mystic. Each of these bars have tiers and rewards, such as unlocking the other playable characters by making progress in them. I’m not sure if there’s any adverse side effects of going heavy down one path over others, though.

Party Hard 2 doubles down on items you can carry by introducing a four item limit, with the first always being your trusty knife. There are objects that can be fused together, like a water can which you can pour its contents out towards an electrical box to carry current from. You can also do similar things with a gas can, then start a fire that spreads. You can even create chains of reactions (which is great for making progress on killing everyone in a level). There are items you can throw like bottles that knock people out, or stacks of money to draw attention. There seem to be red herring items like condoms that don’t offer the distractions you’d expect. There are a certain type of enemy on a level, whether solo or many, that kill you in one hit. I even encounter The Terminator, nude, in a ball, and arriving in an electrical sphere imbuing these same abilities. These goons are extremely aware of your presence and will hunt you down. It’s mildly frustrating if you can’t sneak up on them for a quick stab, or trap kill. 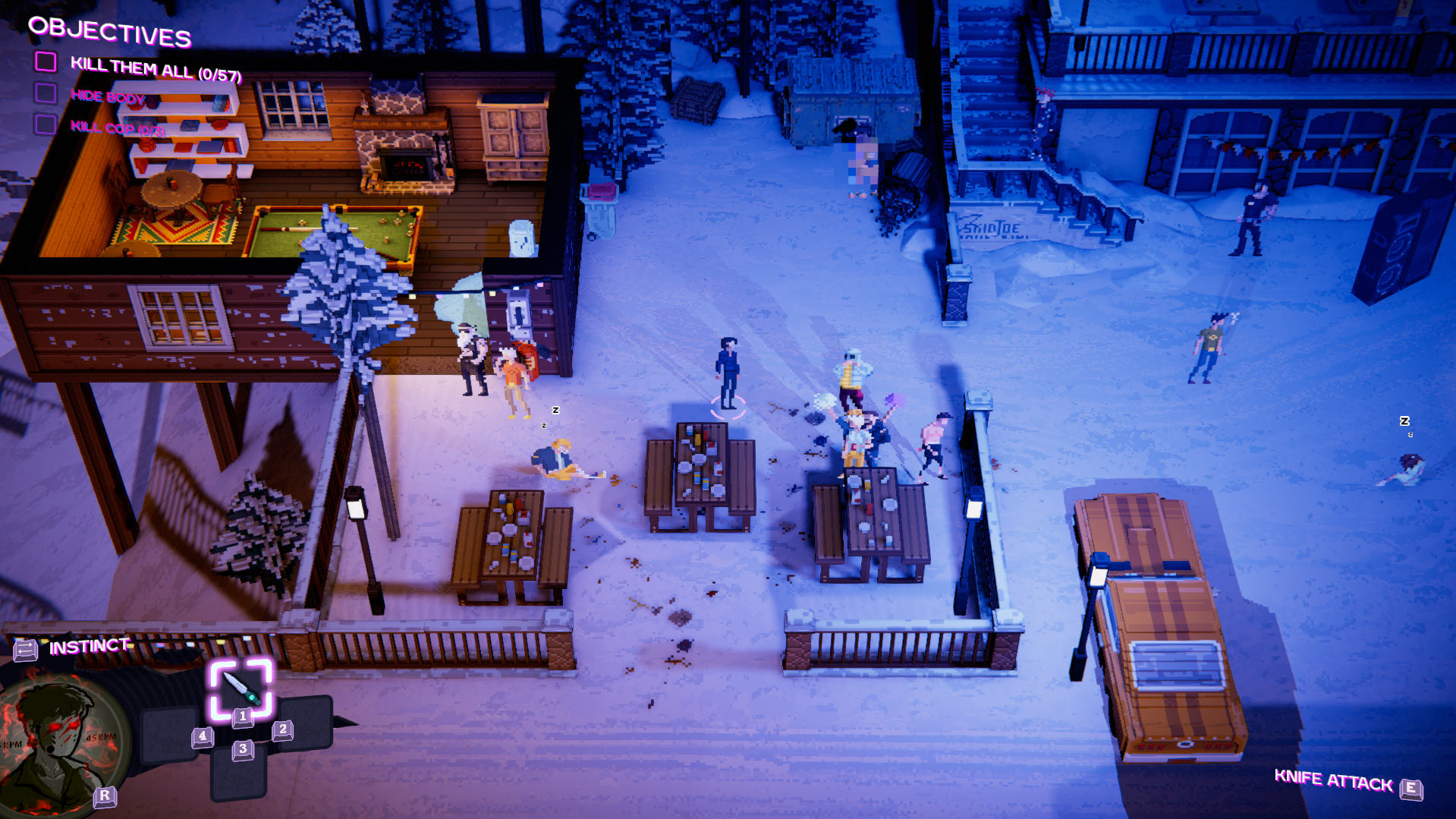 It should come as no surprise that Party Hard 2 has more levels than the prior game, and even introduces boss fights. The locations are similar in tone with the last game, visiting places like hospitals, motels, snow parks, bars, and clubs. The maps have more detail, and are larger in size too. So not only are there more levels to play in, but there’s more to explore in them. The variety of levels are outstanding. So much thought and care went into this game, and it really shows.

It was probably the first thing you noticed about the game, but the new 3D visuals and lighting are a real standout. Party Hard had a unique look, but it looked flat and was hard to distinguish the actors, your player, and items from the foreground or background. The voxel design of the levels mixed with the somewhat flat characters fix that visual concern I had. It actually makes it impossible to go back to Party Hard, on looks alone. But everything about Party Hard 2 is more, and better. The things I enjoy about this game is all backed by 27 new songs that makeup the soundtrack. They’re catchy tunes that never overstay their welcome, and encourage wanting to listen to them outside of the game.

I haven’t been able to experience it myself, but the Twitch integration is more fully featured in Party Hard 2. Thanks to an improved API by Twitch, there’s now on-screen buttons instead of text guiding the interaction. Viewers will now have the power to build the level, filling it with partiers, and more. It is designed to be a bit more antagonistic towards the broadcaster in a way that will be really engaging for both sides. There’s some really inventive and forward-thinking design into the Twitch integration that is more than just simple tricks. 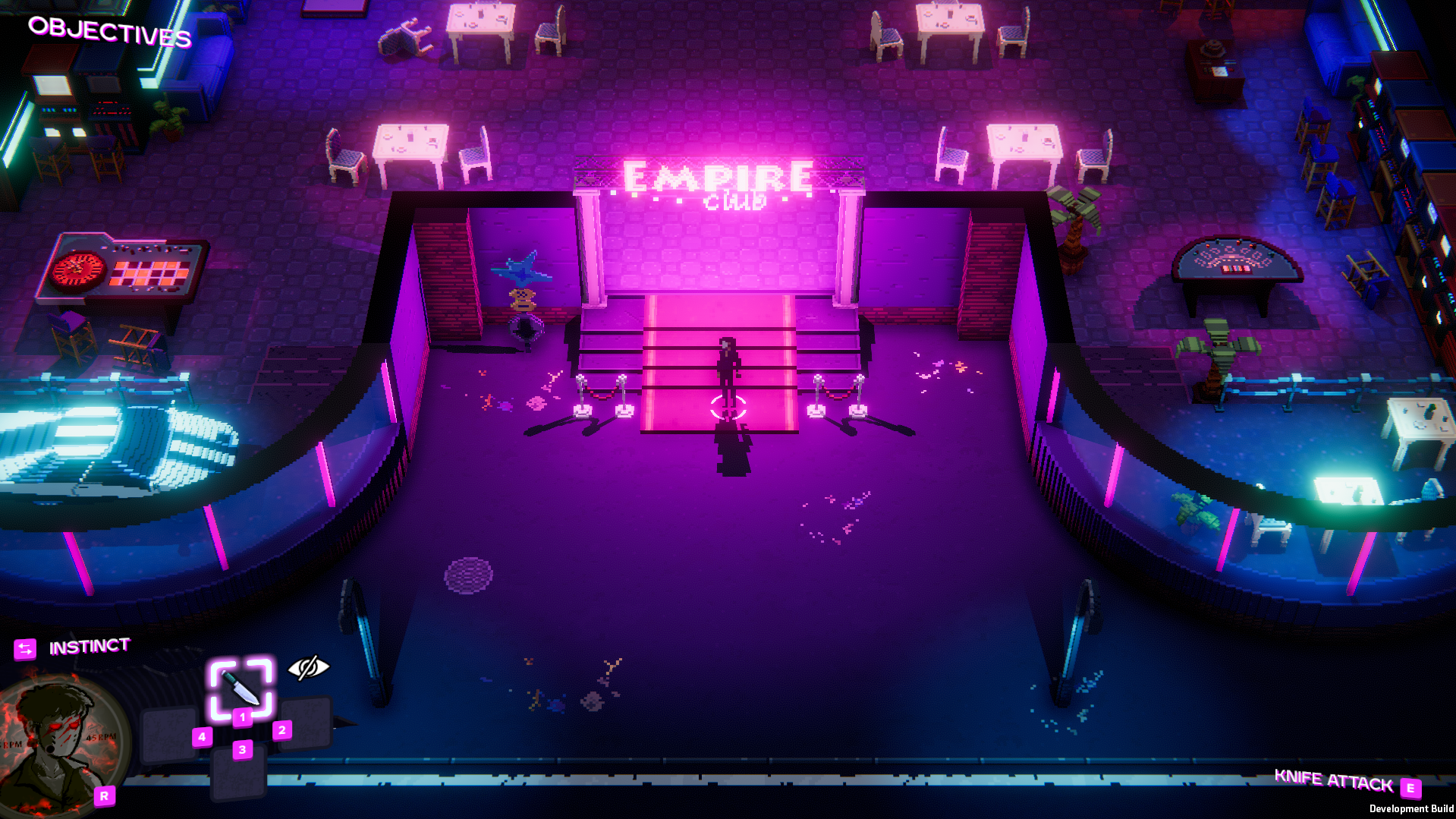 Party Hard 2 does just about everything right. It’s a game of skill, strategy, and patience. It can also be frustrating with its increased difficulty, and can be off-putting, especially when you’ve completed most of the objectives and an ill-timed move spells disaster. Party Hard, a game I absolutely adored, is simply outdone with Party Hard 2. Every aspect and mechanic is improved over the original for the better, making Party Hard 2 a must-play.