Monster Games is back with their newest NASCAR Heat title. This year they’ve overhauled the Career mode, which is something I’ve been longing for since the EA NASCAR days. NASCAR Heat 3 delivers a fun time but not without some hiccups. 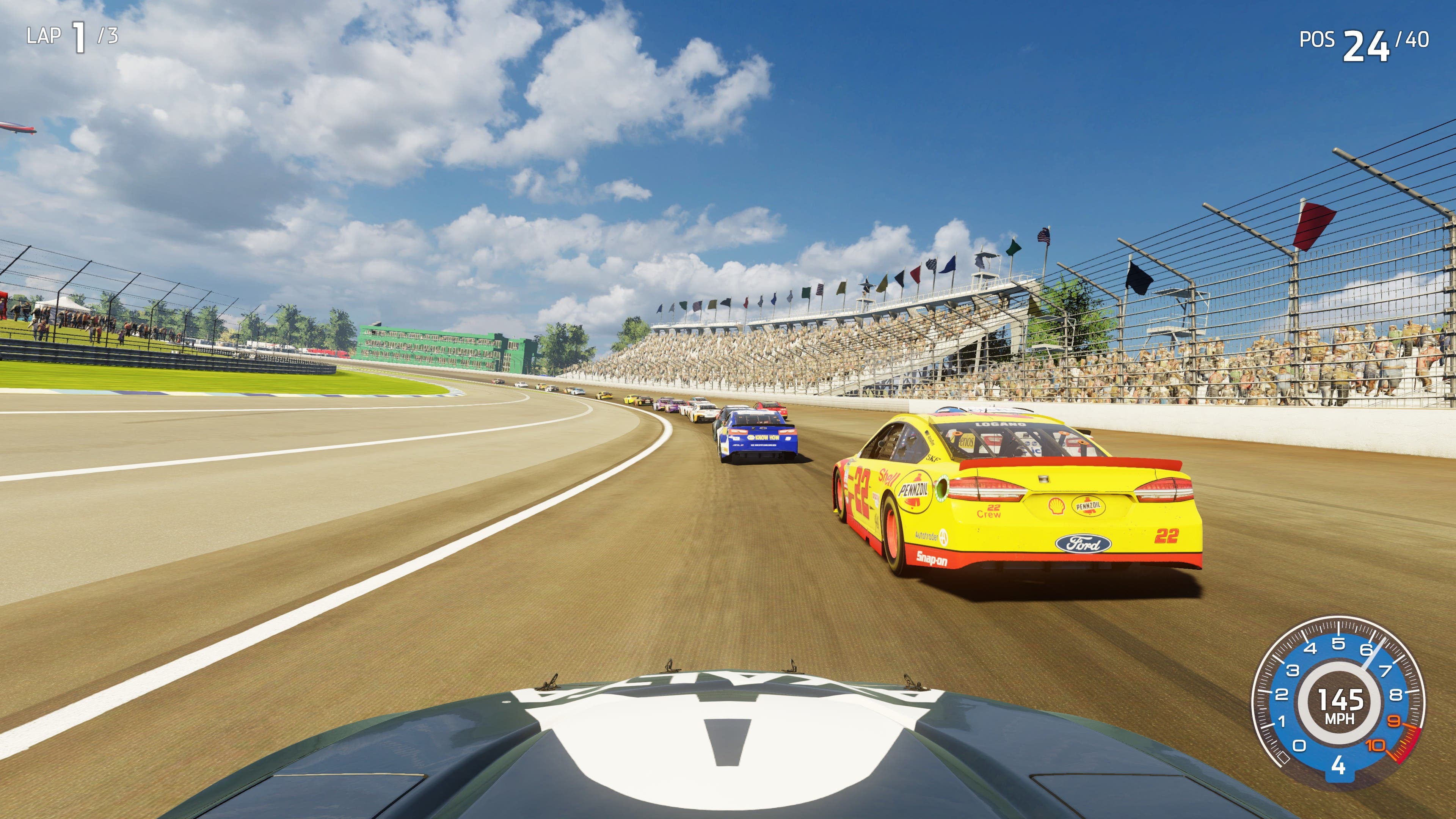 First, let’s get some of the basics out of the way. The game looks gorgeous, every iteration of the Heat series has gotten slightly better with each release. Rather than play on the PS4 this time, I’ve hopped into the PC release; it runs well and very stable. I did find it chugging when it came to a few replays. There were also some longer loads between race finish and victory scenarios. Although it may have just been an issue with my PC so your setup may vary.

As with the last two Heat titles, this series straddles the line between Sim and Arcade. The game does retain it’s “good feel” from previous years, but as I’ve said in Heat 2’s review, the cars still feel like they are too tight around the turns. That changes when you remove the stability help. Once off, the cars don’t drive well with Joysticks. If I had a racing wheel it would feel a lot better. It doesn’t seem like the AI has changed all that much, which is fine. The AI felt competitive and fairly smart. Just like last year, it made the racing that much more engaging. 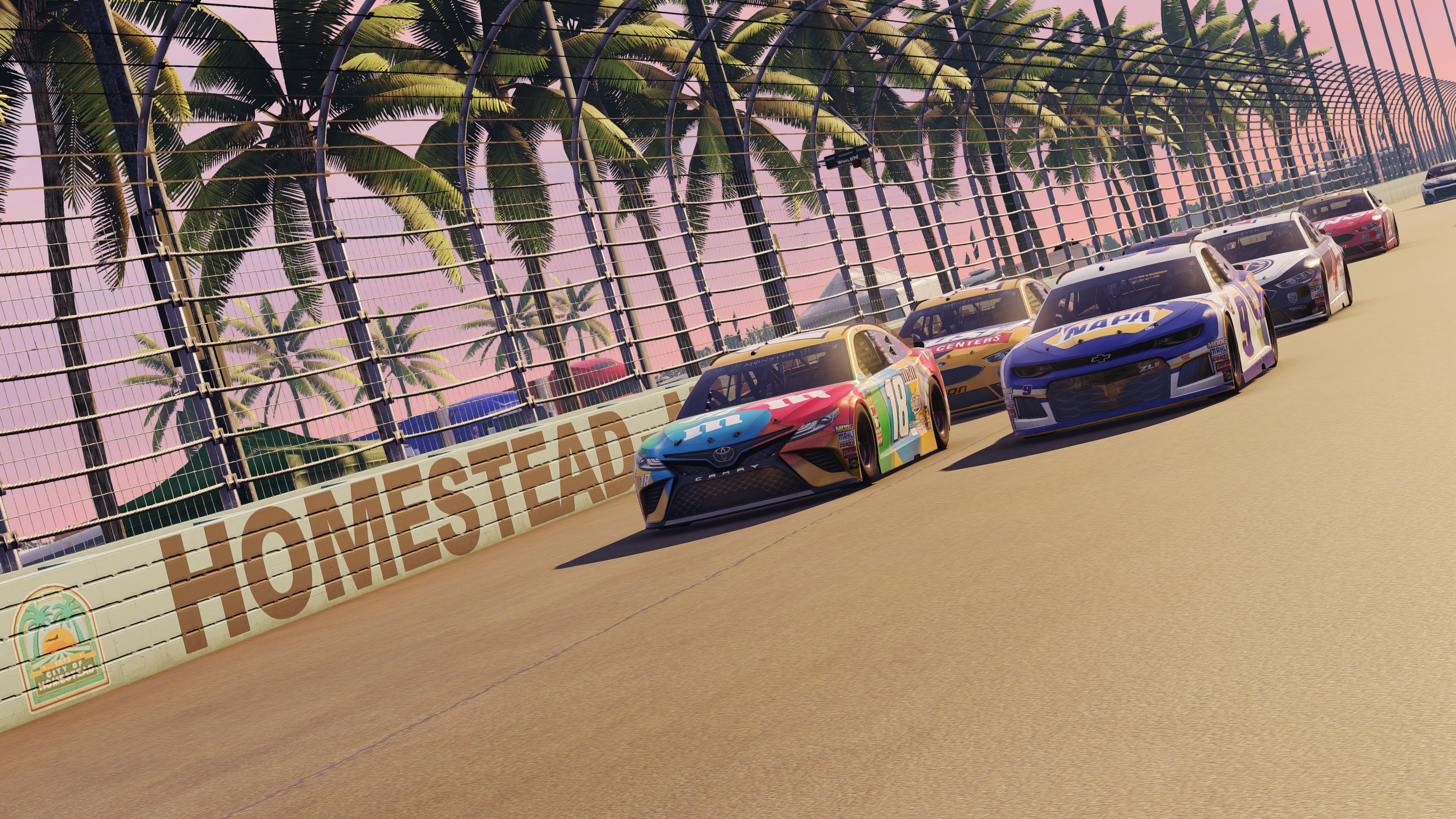 The music in the game is still absolutely terrible. It seems Monster Games can’t get out of this rut that they believe bad rockabilly and generic country are what goes hand in hand with NASCAR. With each title, I’ve had to turn the music off because it’s just so grating. I honestly wish they would use music that has no lyrics. I think some of the tracks they have wouldn’t actually be too bad as menu music if there wasn’t someone laying down lyrics.

They’ve peppered more driver videos throughout the game this year and I feel as if they are becoming a little old hat. Seeing a driver congratulate you isn’t a special as it once was and I find myself wanting to skip the videos, which by the way you can not. It’s also a little off-putting when they interview a driver and it’s the flattest delivery of a line. These guys and gals aren’t actors so you can’t expect much, but I think it’s about time the videos retire. 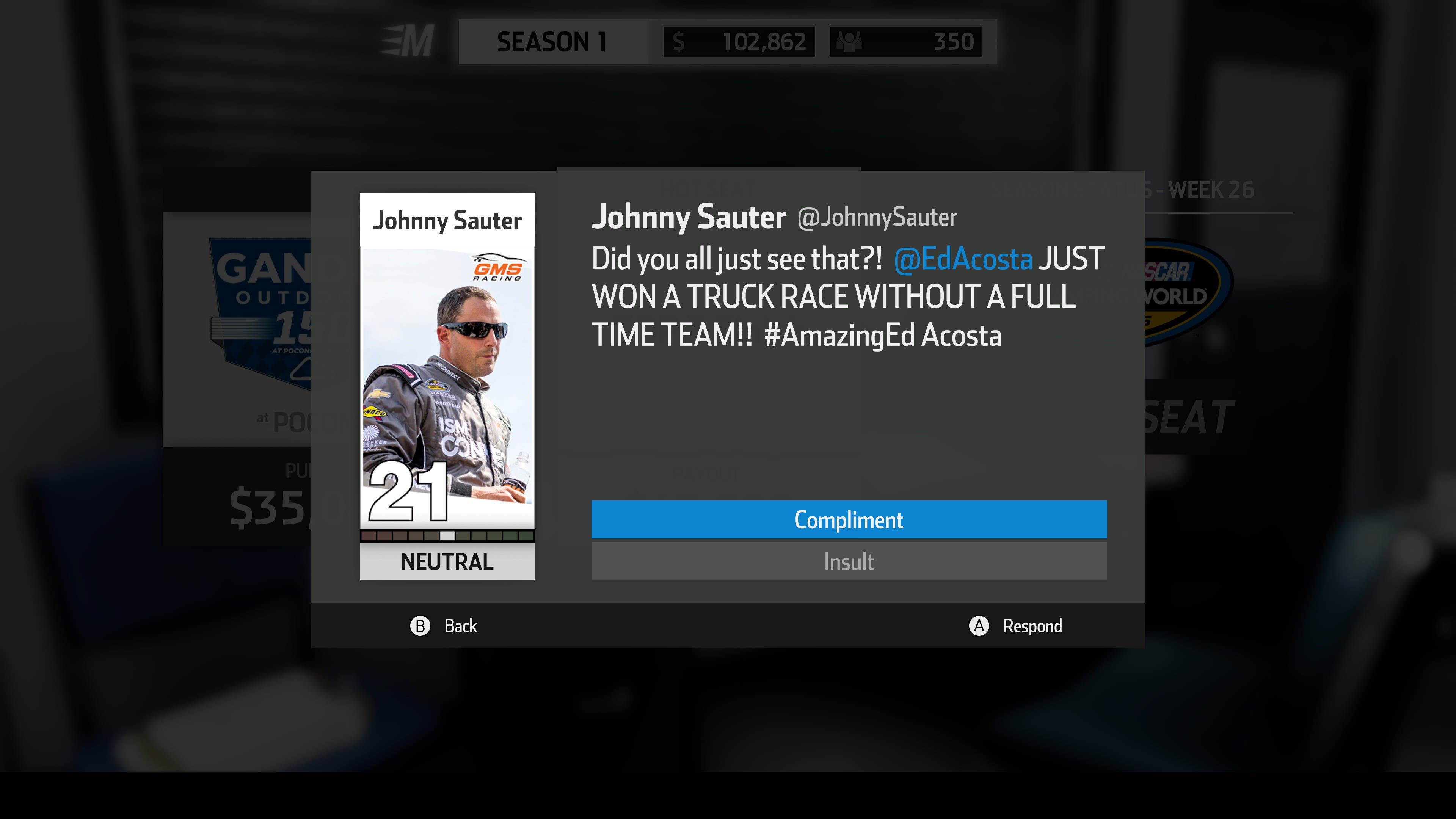 The game includes all the modes one would expect to find in a modern NASCAR title, Single Race, Championship, Career, Online, and Challenges. Single and Online are what you expect, pick tracks and drivers and go race. Challenges return for those who enjoy tackling “what-if” scenarios. Championship just runs you through a single season or a playoff scenario in an attempt to win a championship. They’ve added a new Esports option where you compete online in tournaments for prizes. To go along with these modes, they’ve introduced the Dirt series to play in. It isn’t an actual sponsored series though, which is ok. Its a small small-ish addition, but the cars are fun to whip around in the dirt.

So with that, let’s get into the meat of my review, the Career. As with the previous installment, you can create your own driver. What’s strange is that there is no gender option; that doesn’t mean you can’t be a lady though. They’ve hidden the ability to switch genders under the preset slider; it’s a strange choice. When adjusting certain properties of your character, you are able to see their whole body, so that’s a big plus over last year. You’re not going to find a vastly detailed creation system here, which is kind of a let-down but is understandable. You want to get out there racing right? This may only be a disappointment for me wanting to “roleplay” as me in the game. I’m happy to report that finally, FINALLY, you can own your own team in the Career mode. I do want to make note that prior to the latest patch for the game, things were a bit different in Career though. I’ll be sure to note some of the differences just in case you happen to get a copy of the game that isn’t patched. The player will start in the lowest rank series, the dirt series, and work their way up to the Cup series. You first have to race a few races for other teams in what the game calls the Hot-Seat. Basically, you’re driving occasional races for random teams in your first year. After that, you’ll get the option to join one of the teams that you raced for or create your own team. If you choose to create your own team, the first thing you come across is choosing your team name. What is kind of silly is that you’re only given the option to pick from a handful of pre-made names and logo. They really don’t show up anywhere else in the game except a menu or two, so why not give the player the option to enter in their own name?

From there you choose from three sponsors. Each one offers different payout options and bonus options. In the dirt series, just go with whom pays out more. But if you’re in the three higher tiers (Truck, Xfinity, Cup) you have to pay attention to the manufacturer chosen as well. Prior to the patch, this information was hidden from the player. So I had chosen the sponsor with the best payout and got stuck with a Toyota truck. I drive Fords so this was problematic to me. I dug around in all the menus but there was no option for the player to switch their make of car. I was livid and honestly was going to write my review then. It wouldn’t have been well received if scored right then and there. Lucky I had noticed a patch was coming and waited. That first patch did reveal to the player the make of car tied to the sponsor. It was unfortunate that I had to re-race the whole dirt series just to be able to pick the car I wanted though. This whole headache would have been resolved if I could have just picked it myself. It seems like a bad design to have it set up this way. It’s my team and I’m supposed to be making the decisions on things, so why am I leaving the make of my car up to the sponsor? It’s baffling. Not only that, but your paint scheme is also tied to your sponsor. The best you can do is change the colors. That’s nice and all but you have these pre-made designs in the car creation section of the game, why am I only allowed to use what the sponsor decides? This decision of having things tied to the sponsor is frustrating, especially when it’s supposed to be my team.

Money this year has some actual value. You’ll need your hard earned cash to hire a team to work on your car before each race. At first, this sounds great but the system does have some flaws and is easily manipulated. You hire a crew to focus on Engine, Aero, and Suspension. You’ll pay to level them up, getting to a max 15 stat. When you assign a crew member to a car, it will boost that car’s stats in that category. All this is good! Adds some benefit to earning money. 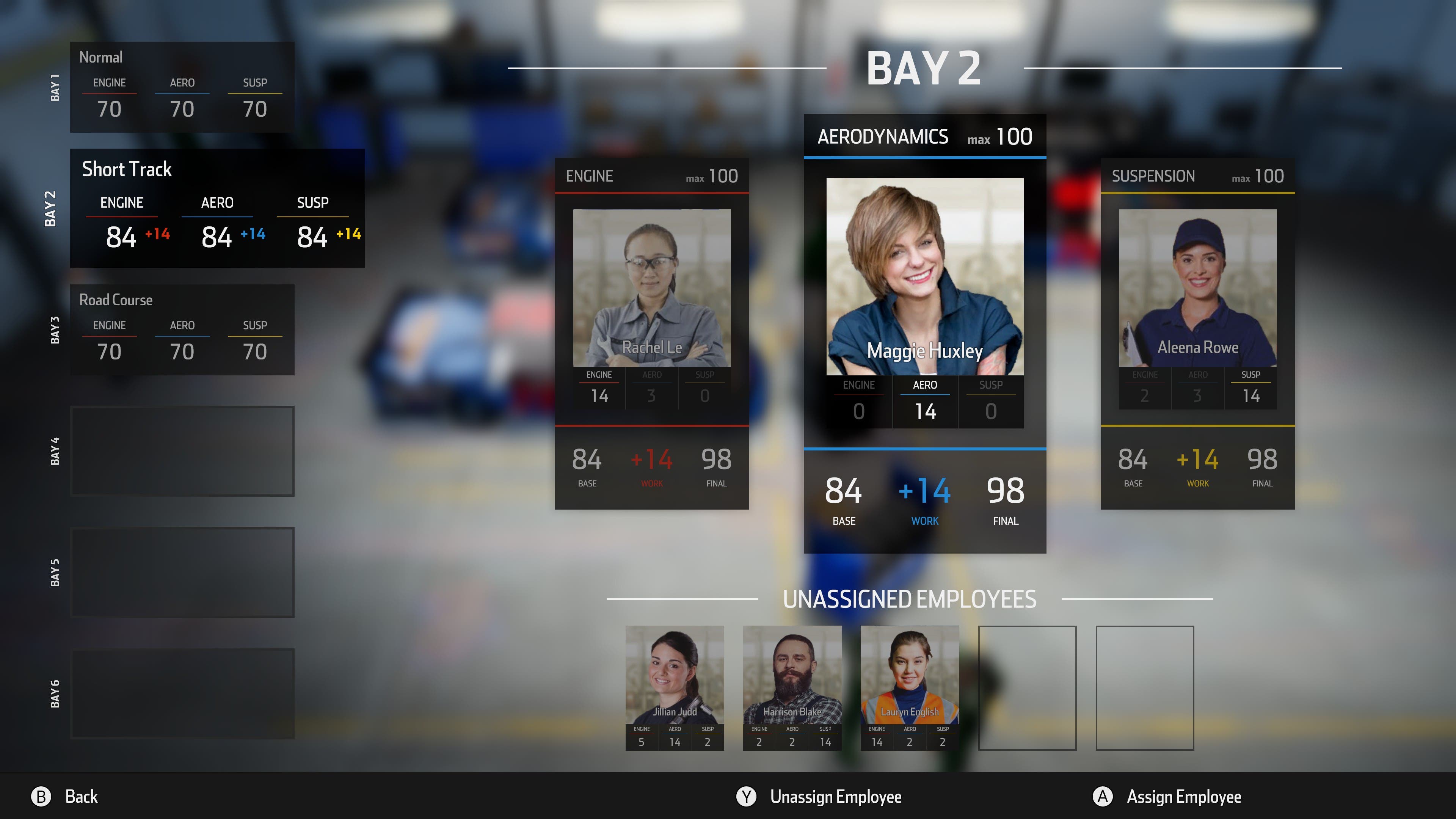 The downside is that you can max one person in each discipline and be fine. So rather than taking the sum of each crew member’s talents, it just focuses on whatever skill you’re assigning. For example, if Beth has a 5 in Engine and an 11 in Aero and you assign her to Aero, the car will only gain the 11 from aero. It makes assigning a crew as simple as maxing out two people in each discipline and just rotate them out.

One last thing I want to touch on with the crew is that you can’t take them with you when you move up to a different series. There’s no promotion feature or anything, those crew members are stuck in the series you hired them in, you’ll have to hire new people. When you go to hire, they randomly give you a set of people to choose from, so any of your old crew could show up. Unfortunately, their stats are at their base levels again. It’s frustrating to put all that time and money into someone and not be able to bring them with you. The crew management part of the career has some tweaking to do, but it’s on the right track!

The NASCAR Heat series is making the right moves to becoming one of the greatest NASCAR titles out there. It’s not quite there yet, but with some more improvements in the career, physics, and music I could easily see future Heat titles becoming the pinnacle of NASCAR games.