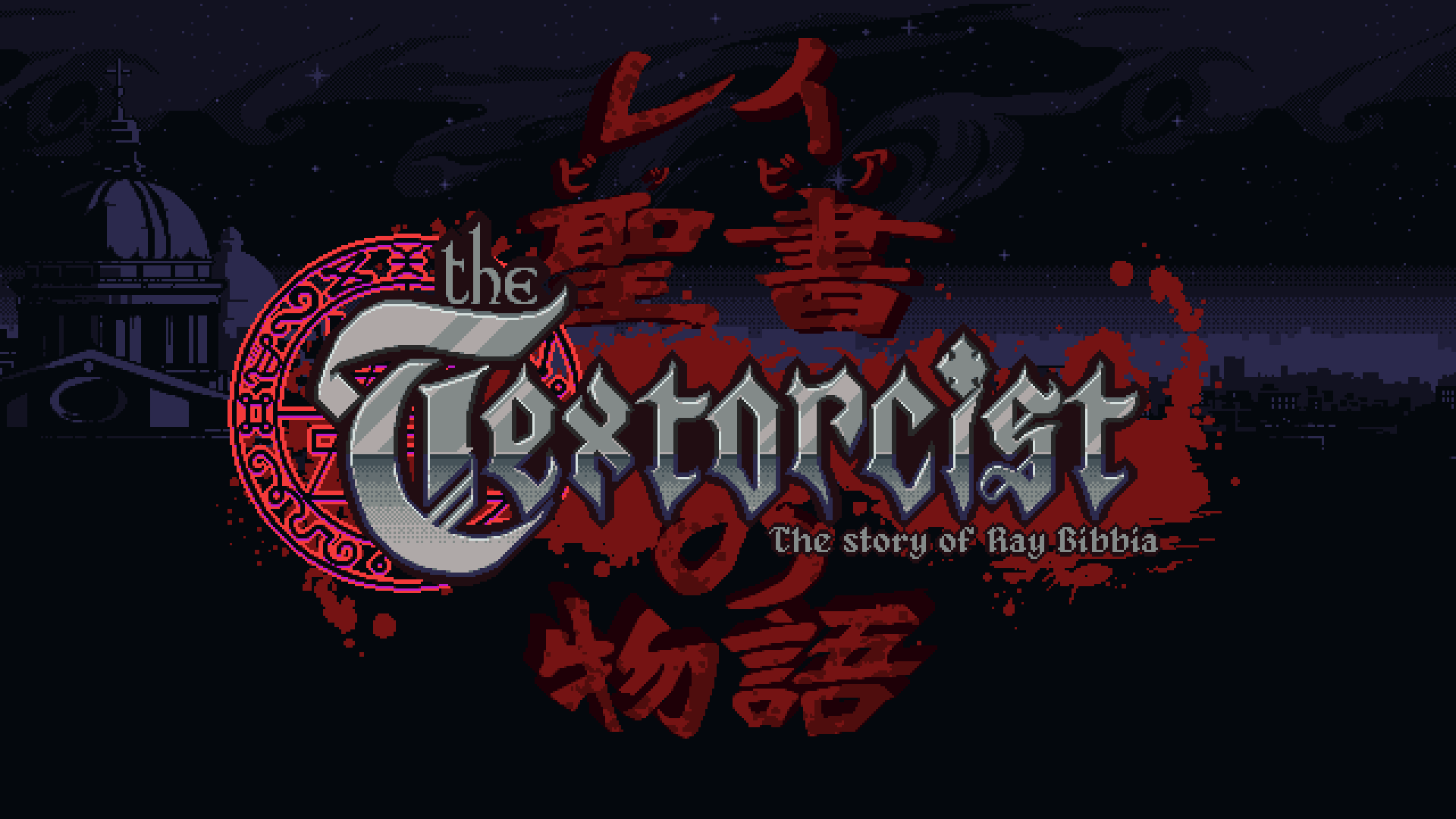 The Textorcist: The Story of Ray Bibbia Review

The Textorcist: The Story of Ray Bibbia is a story worth telling. Ray isn’t the most interesting character, but those he exorcises and talks to tend to be the bigger focal point. The Textorcist combines several genres for an eclectic mix of shmup, typing, and even boss rush for a frantically paced game with proper moments of calm. MorbidWare’s game is a solid first outing, and there’s some interesting things at play for it to stand out, but ultimately the controls are at odds with one another, and the frustrations tend to pile up the more you play. 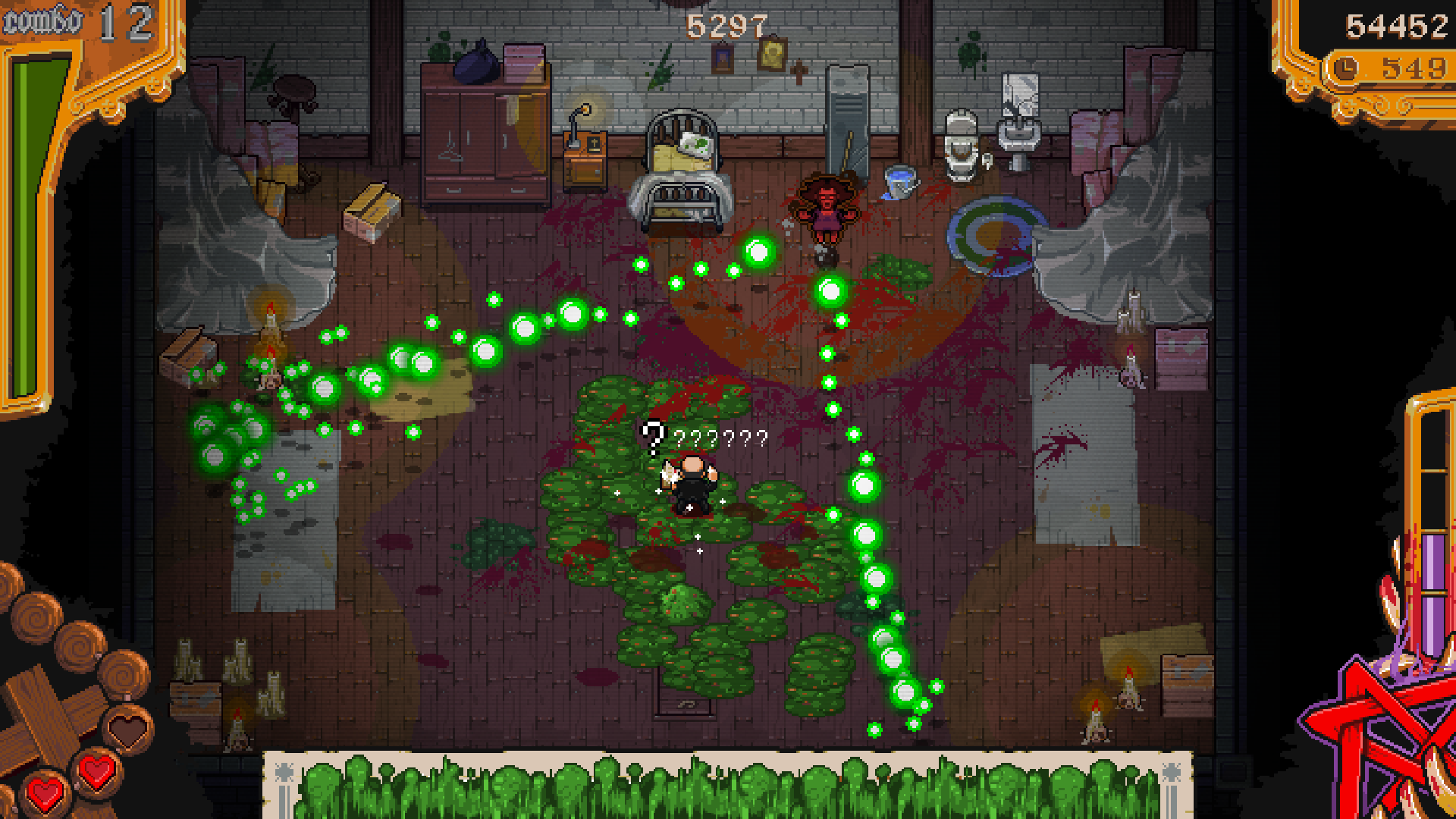 Ray Bibbia is not a name you’ve heard before, but you’ll get to know him over the course of the game. Residing in Rome, Ray acts like a private detective, but is an exorcist. There’s elements of Ray’s day-to-day that make him seem like a priest detective, like tracking down names and places from clues to perform his next exorcism. Though, it’s clear that this is a hybrid of shmups and typing games and not anything it isn’t. In total, there’s ten levels, and ten bosses to face off against, each with their own mechanic such as vomit which prevents you from seeing the words to type next (unless you’ve memorized them). Should you die, it’s unfortunate the checkpoints are not right as you’re starting the fight, as having to redo (albeit small) sections of gameplay to reach that same starting point is still frustrating.

The Textorcist: The Story of Ray Bibbia has two control schemes: one for keyboard, and another for gamepad. Both have their ups and downs, but I’d say the keyboard controls have the biggest disadvantage, and is ultimately the worst way to play the game. For the keyboard, you naturally type with two hands (if you have practiced that way). But because of the nature of the game, you’ll need to move often, which is done with the arrow keys. This isn’t intuitive in any way, and is really disruptive. I have to imagine this is by design, as you sacrifice movement for accuracy and speed. On the other hand, gamepad play requires using the bumpers to choose letters on the left or right to complete the word and then the sentence. The sacrifice here is speed for movement. The gamepad, seems to be a better option because you can do both moving and typing in a natural way, but it being a typing game makes you feel bad for not using the keyboard. 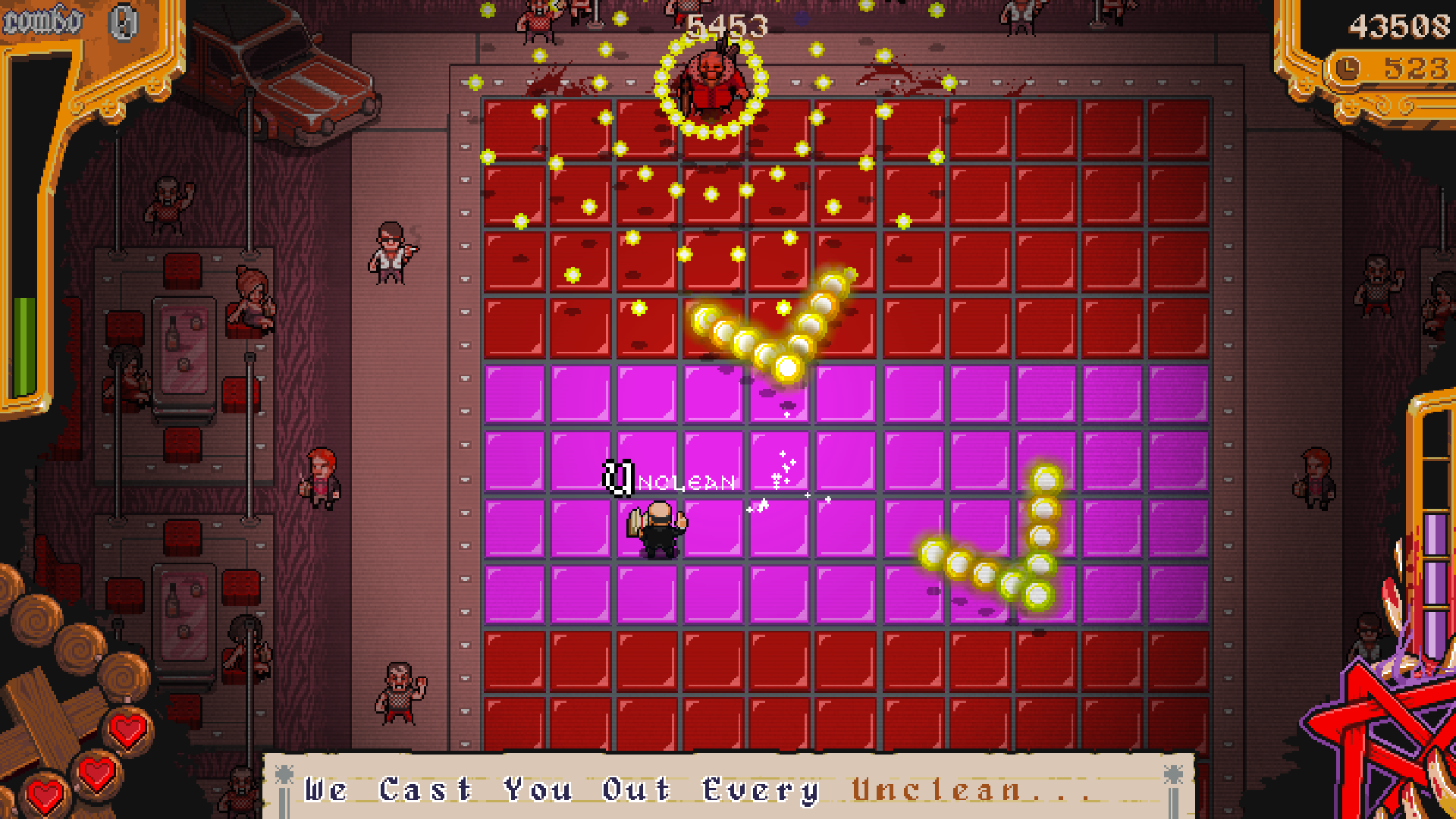 One of my favorite things about The Textorcist is how health is managed. You only lose health when the bible is out of your hands. When it is in your hands, you can get hit once before you drop it, and have to go retrieve it. If done well, you’ll negate all incoming damage if you dodge safely. Another element to this, that there’s a circle that serves as a radius in which you can exorcise. This adds a layer of tactical.

There are times where The Textorcist feels like a boss rush game, but the intensity is paused with interludes. Whether these are lengthy dialogues between characters, using an old computer to perform searches on the “Godle” search engine, or rifling through your file cabinet for clues, these moments help break up the intensity that is the boss fights. 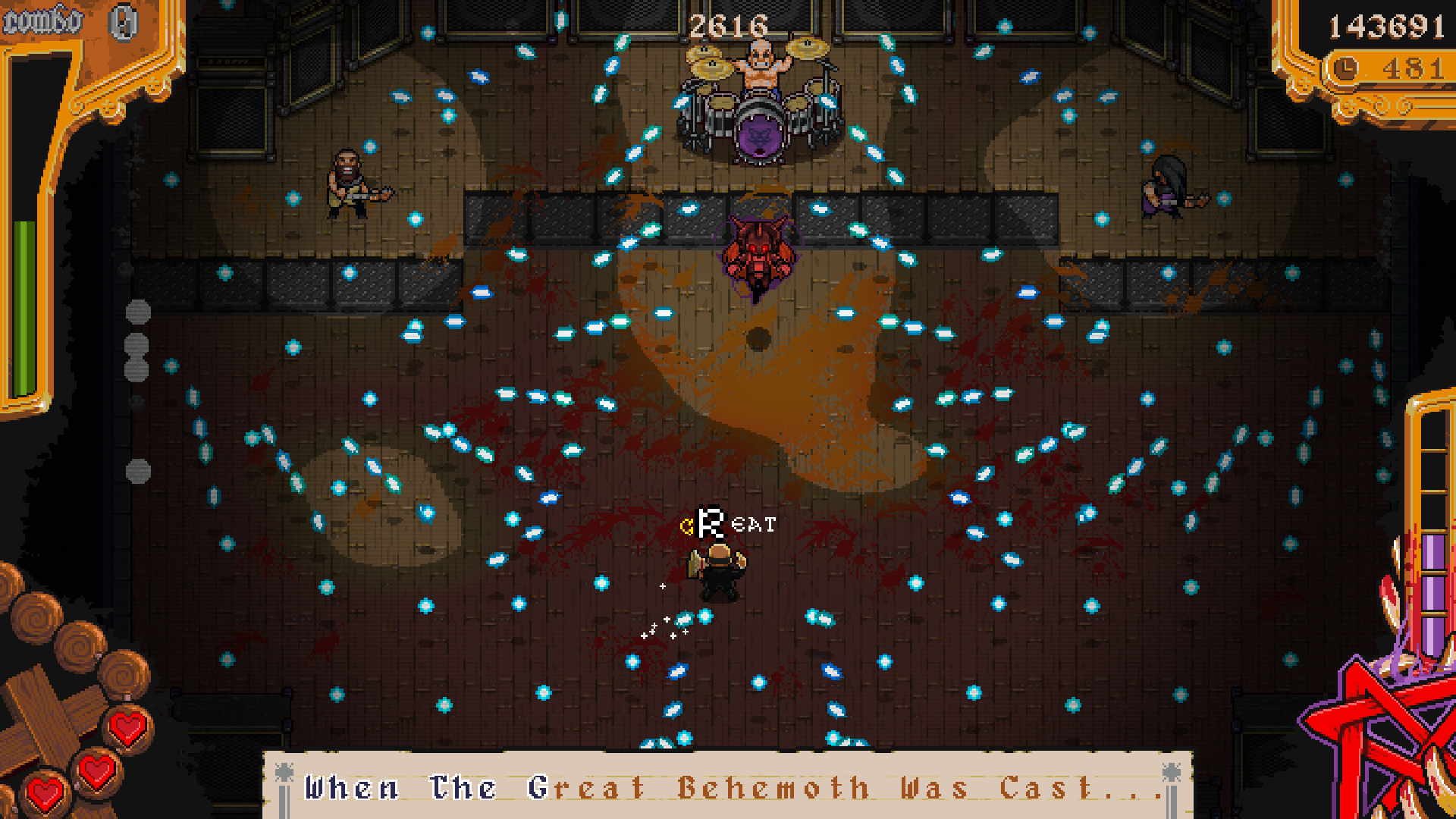 The soundtrack is pulsing and pounding by darksynth artist, GosT. This by far is the best thing about The Textorcist. Each has a unique sound to it. The main title track sets the tone, and the walking around music sets the velocity. Then from there, the boss fight tracks have their own personality infused by the character and scene they take place. This is the type of game you buy the soundtrack in conjunction with.

Leaderboards are an unsurprising inclusion in a game like this. But due to its arcade nature of score, time, and combos, it couldn’t be more fitting. This even asks you to have a three-letter abbreviation for your name. The game doesn’t go into any great detail to tell you how well or poor you did, and the leaderboards will show you top players as well as nearby, that gives you that indication. Placement on the leaderboards encouraged me to go back and replay them. 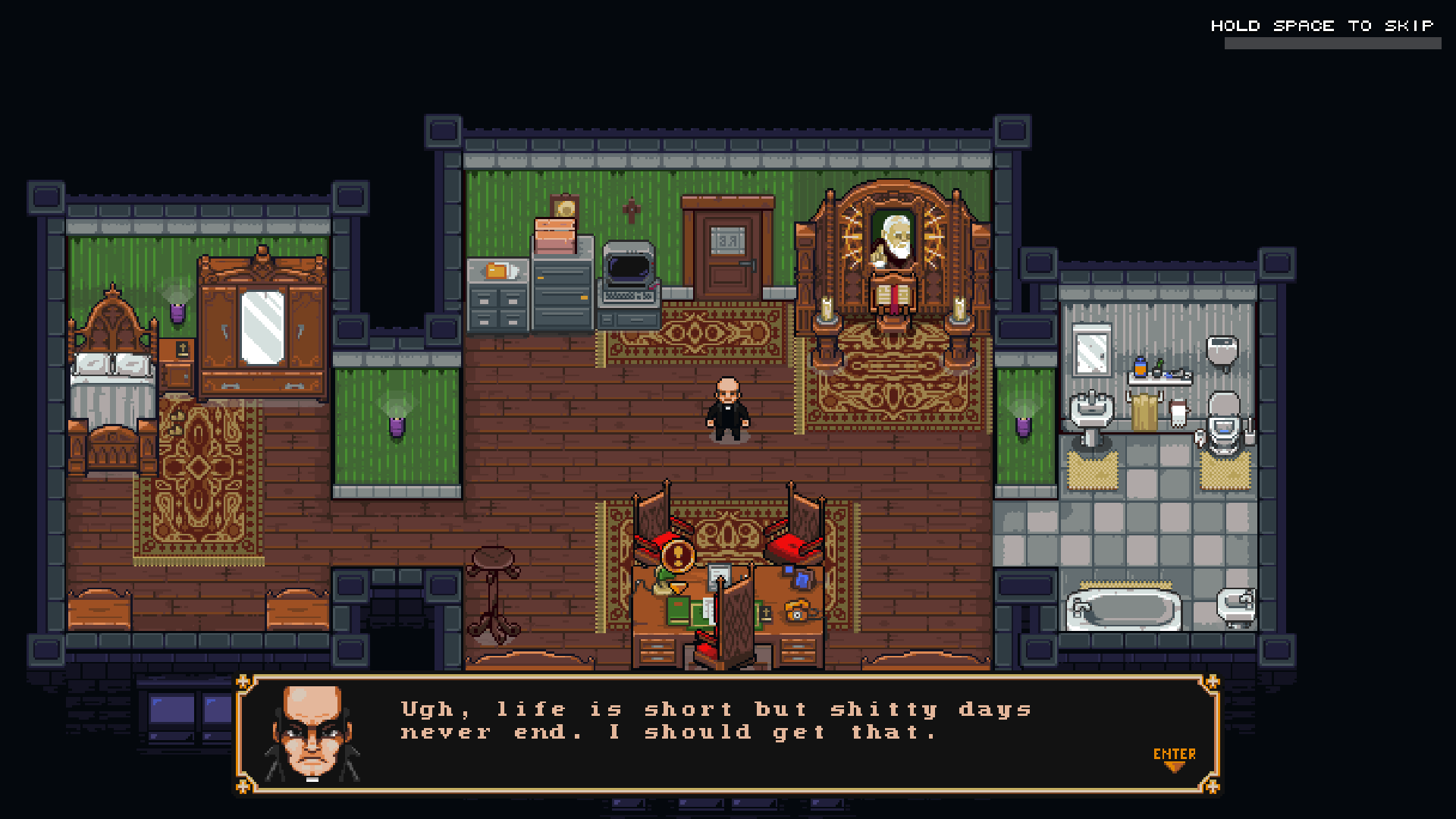 The Textorcist has a unique blend of genres that work out really well. It’s disappointing that the keyboard controls weren’t given the same level of creativity that the gamepad has, and that it ultimately becomes the preferred way to play a typing game. I enjoyed that outside of movement, you had to type to do simple tasks like opening doors, answering a phone, and so on. The Textorcist: The Story of Ray Bibbia is a solid game that those who love shmups or typing games should check out. Now, Typing of the Dead this is not, but it has its own flavor that’s worth the taste.