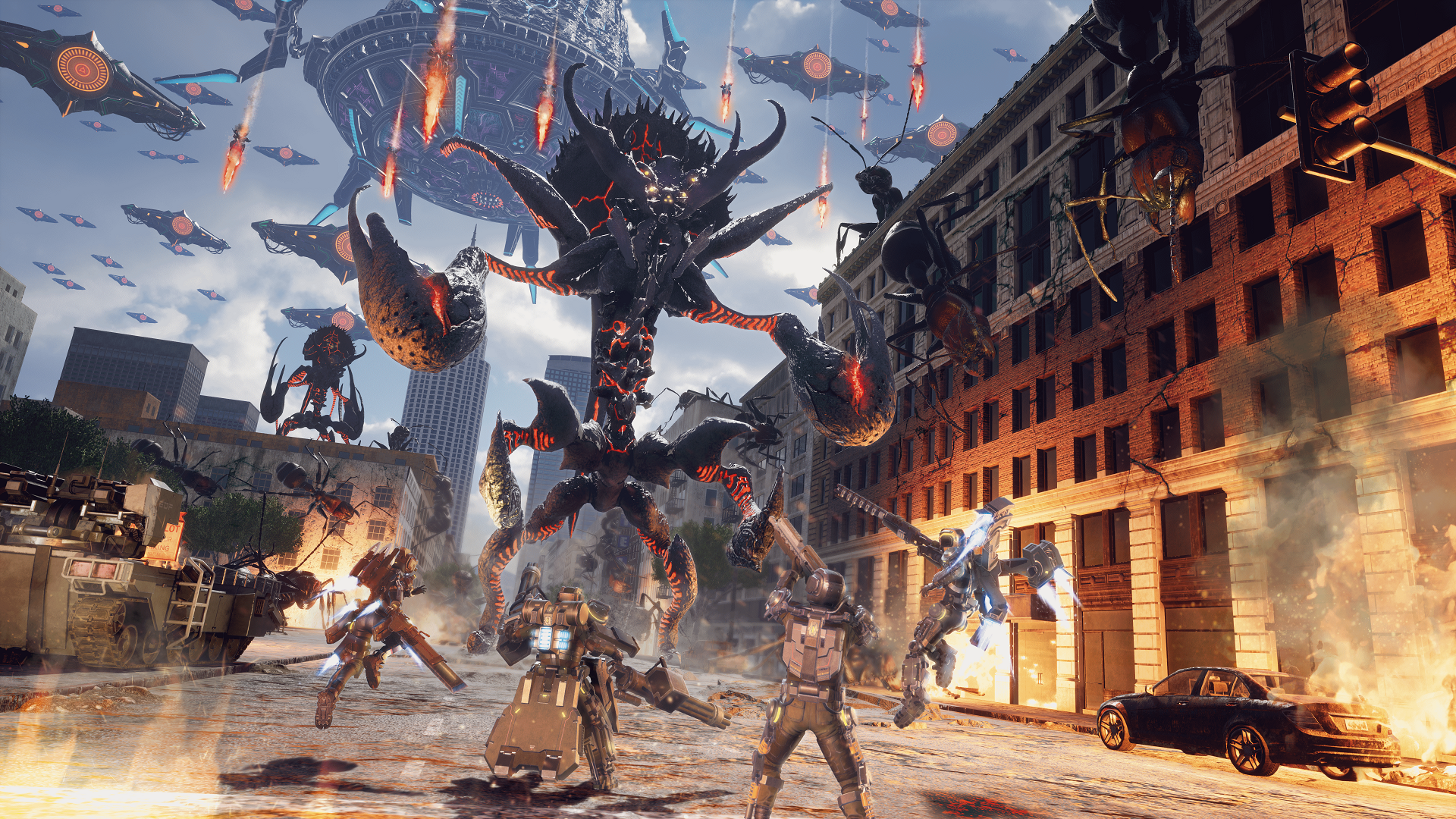 They don’t venture too far. You can still expect to see giant ants scampering about, UFO filled skies that annoy you from above, giant robots terrorizing the city, and many more monsters that are satisfying to kill. Yuke’s does attempt to give players a story in Iron Rain. The Aggressors are on the attack, and the EDF is in trouble. But one lone soldier with a special suit has survived to be the savior the earth needs. The story is told through corny characters and its not great. The acting is terrible, but I imagine that fans of the series are coming to the game partly for that. I mean its part of the game’s charm. Unfortunately, most everything discussed in any dialogue is equal to being surprised about a new giant enemy or sentiments of “kill them all”. It’s a little funny how, after so many years in their world, people are still surprised when another giant enemy bug shows up. One of the worst actors in the game is a scientist who sounds like a very stereotypical old man scientist type. It’s dumb but charming all the same.

The primary grind of Earth Defense Force is to kill giants enemies, collect gems, rinse-and-repeat. The battles are basic and typical of what you’d expect from your standard EDF game. This one felt a little clunky though, and the animations on the giant bugs looked janky. Everything looked like it was a budget title, which leans in on the B-Tier charm. Unfortunately, no matter the class I choose, I always felt slow. The overdrive mechanic boosts your speed and attack, but with how short it lasts, I felt like I was moving through molasses. I’m sure its a design decision to give the feeling of being overwhelmed, but it was a bit frustrating at times. Yuke’s gave players around 50 stages to complete in single player or co-op so at least there is a ton of time to get used the mechanics and collect drops from your bug friends.

Speaking of drops, you’ll collect gems for health and crafting with each enemy you destroy and by completing levels, you’ll unlock blueprints for various weapons, vehicles, and cosmetic items. The cosmetic items don’t vary all that much at the start, but as you unlock more to equip, they become slightly more unique which is appreciated since a good chunk of games these days give you a palate swap and claim they have over 40 costumes! Granted EDF: IR also has a bunch of palate swapping for cosmetics, so they aren’t immune to this issue either.

There are a wide variety of weapons to use as you progress and a lot of them are fun. From rockets to machine guns to lasers, there’s something here for everybody’s tastes. You can equip a few primary weapons and a handful of boosters. I typically went with a variation of Rocket Launcher and Machine gun with the rockets getting used the most. When choosing weapons, they give you a detailed list of their stats. Things like damage, ammo amount, range, reload times, blast radius, shots-per-second, etc… They even give you the option to load up a practice mode where you can test weapons to see if they are the right fit for you.

Depending on which character class you choose, your loadout varies. The standard Trooper can bring more equipment on to the battlefield than say the light and nimble Jet Lifter class. Your HP leveling stays with you, the player, so if you want to try out another type, there’s no added time in trying to level them up to where you were before. Having this feature is also a plus for playing co-op so you and your buddy can find a team that compliments one another easily.

Earth Defense Force: Iron Rain is more of the same Earth Defense Force, and that’s great for fans. You will still spend your time battling giants, trying the save the Earth from certain doom. Even for how cheesy the acting can be, for how slow it feels, and for how janky the animation looked, I still had fun doing it.