It’s funny to think of it this way, but EARTH DEFENSE FORCE: IRON RAIN is a bite-sized EDF game, as it only has 52 missions to complete to reach the end of the campaign. This is exactly half of EARTH DEFENSE FORCE 5, which has 110 missions and can take upwards of 25-30 hours to wrap-up the story on one difficulty. In reviewing the PlayStation 4 release, we talked about the fact that EARTH DEFENSE FORCE: IRON RAIN does feature a story. I’m not sure if it’s intentional or not, but it’s a heavy in tone where characters talk about collecting enough gems to upgrade the housing for them in the family. It’s a weird thing, but lends itself to telling a stronger story.

With four difficulties to choose from, you can tailor your EARTH DEFENSE FORCE: IRON RAIN experience to your skillset or level of challenge you desire. It does affect what weapons you’ll get access to, and able to use. For instance, you can’t play levels on higher difficulties, and expect to get powerful weapons for use in lower difficulty runs. Once you commit to a difficulty, you pretty much have to stay there or risk missing out. 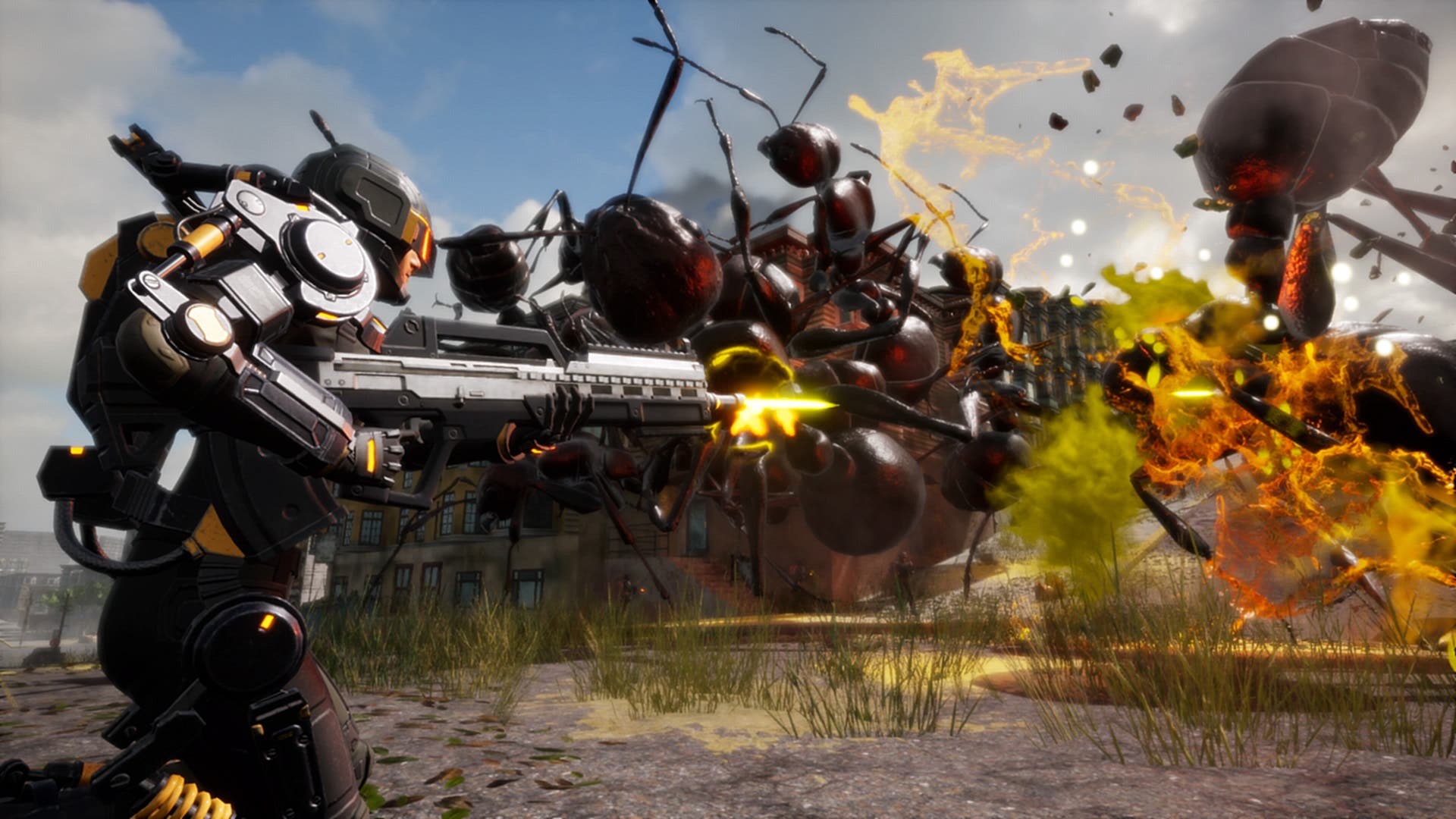 Physical Augmentation Gear, or PA Gear takes center stage in this game. It lets you take on different classes for your single character. There’s the Trooper class that you start with that lets you dodge in any direction laterally. Then, you’ll unlock the Jet Lifter which lets you fly for short periods of time. The Heavy Striker which is similar to the Fencer that bears a shield, and the Prowl Rider which leads you tether to buildings and zip across distances really fast. Each character class is decidedly and completely different, for your playstyle.

You get the options to do some manual upgrading like increasing your health points. You’ll unlock guns, but you can’t use them until you buy them. You have an item capacity, but using items in missions hurts your final score, and you never feel encouraged to use them. It’s definitely a “desperation” item more than anything else. The aforementioned final score is based on time, energy gems, damage received, and technical score to formulate your final ranking. It’s definitely not easy to max everything out. For the first time ever, you can now pilot vehicles. Sometimes they are trucks strewn across a level, other times they are flying craft such as the Skyfish that you call in. Or you can get your mech on with the Night Crawler or the Memphis tanks. They aren’t the strongest things out there, but worth the investment. There’s a vehicle limit of only being able to call in 4 vehicles per mission, to keep you from overusing or overpowering the level.

You’ll be fighting UFOs, ants, roaches, Godzilla-types, and many, many more. Upon killing them, they will drop these tri-color gems.There’s red, blue, and yellow gems to collect. Doing so is two-fold as they are used for upgrades, as well as what score you get at the end of a level. Miss any of them, and your end-screen score goes down. 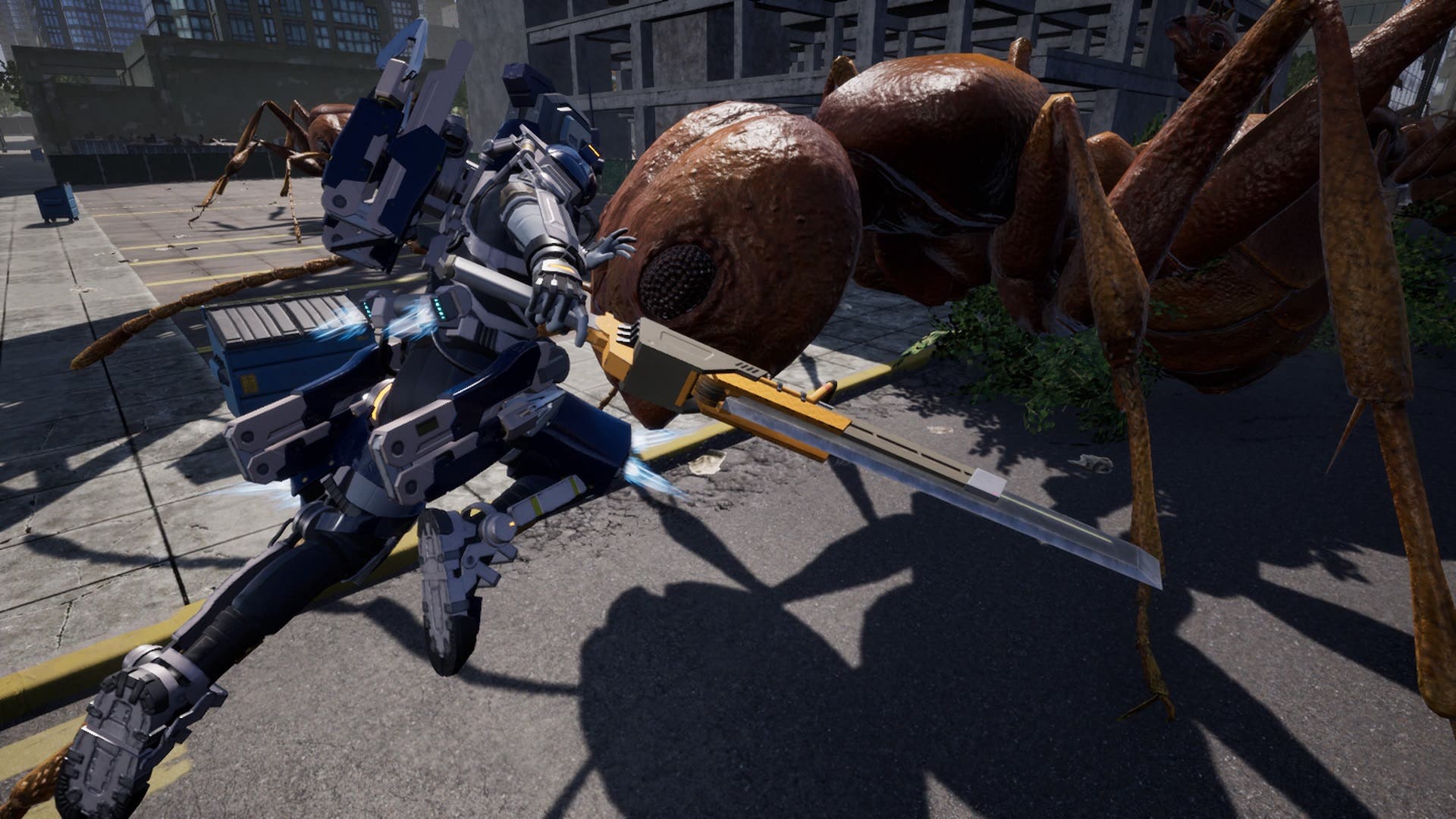 There’s quality of life improvements to this over the other EARTH DEFENSE FORCE games. First and foremost, it’s much easier to read and navigate the menus. No longer is text overlapping text. Sure that was part of the charm, but it’s a real joy here. Spoken about above, you now only have ONE character to level up, instead of having to replay the game multiple times to upgrade more. Now you just swap out the armor and class changes, which is a much better investment of your time and in-game money. Lastly, the game features an active reload mechanic for your higher-powered weapons that cannot be understated. It’s essentially, essential.

The game features online coop and PvPvE, but during pre-release I wasn’t able to play any of it. Introduced in the campaign, is another force that isn’t EDF. You’d expect this to be a unified front, but the Rebellion has other plans. The new Mercenary mode pits the two factions against each other, competing for these gems by defeating common enemies. It supports eight players and conceptually sounds like a good time. There’s some issues with this PC release that EARTH DEFENSE FORCE 5 didn’t have. Firstly, there’s no support for resolutions above 1920×1080, it’s borderline unacceptable when you have games in 4K resolution. Next, the tight FOV Is almost too hard to tolerate. It’s certainly a more intimate experience, but all too often a friendly or enemy will occupy the foreground, obfuscating your viewport. Running on Unreal Engine 4, the game has a real impressive look, and does run at a cap of 60fps. The game just looks so good at night with all of the particle lighting, this is where the game shines. This is a weird thing where the EARTH DEFENSE FORCE mainline series doesn’t look great, but plays great. And EARTH DEFENSE FORCE: IRON RAIN looks great, but doesn’t play great. There’s certainly trade offs when it comes to this game. It’s a different kind of EARTH DEFENSE FORCE, but not necessarily a bad one. IRON RAIN carries on the B-movie schlock in a new series, all in good fun. It’s like the newer Starship Troopers movies, they have newer CGI but it’s still not that great, and it has changed many things about it that you’re used to. You still watch of course, because it’s a good time. EARTH DEFENSE FORCE: IRON RAIN is bug-squashing fun at its finest, with some changes to core systems you may or may not like.