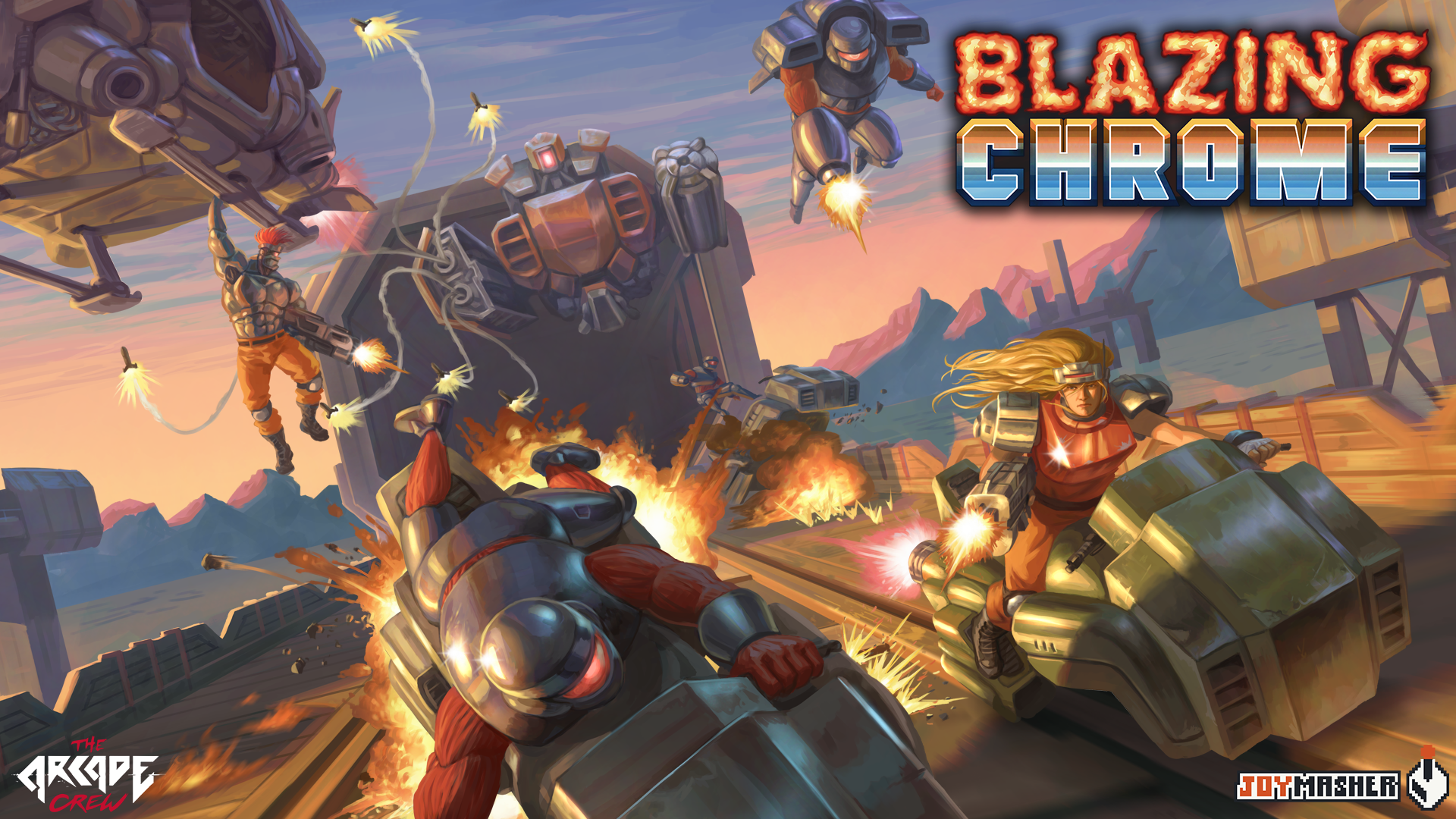 JoyMasher has a penchant for making games in the 8-bit style that’s paid homages to classics of that era like Ninja Gaiden, Ghosts n’ Goblins, and Castlevania with their games, Oniken and Odallus: The Dark Call. With Blazing Chrome, JoyMasher takes on the 16-bit era in a Metal Slug meets Contra-esque game. Truth be told Blazing Chrome is not easy, and neither have JoyMasher’s prior games, but it’s far from impossible. There’s difficulty options to lessen or increase the hurt. All in all, it’s a wild ride full of crazy bosses, great music, and a memorable look that will have you wondering where you’re supposed to deposit your quarters. 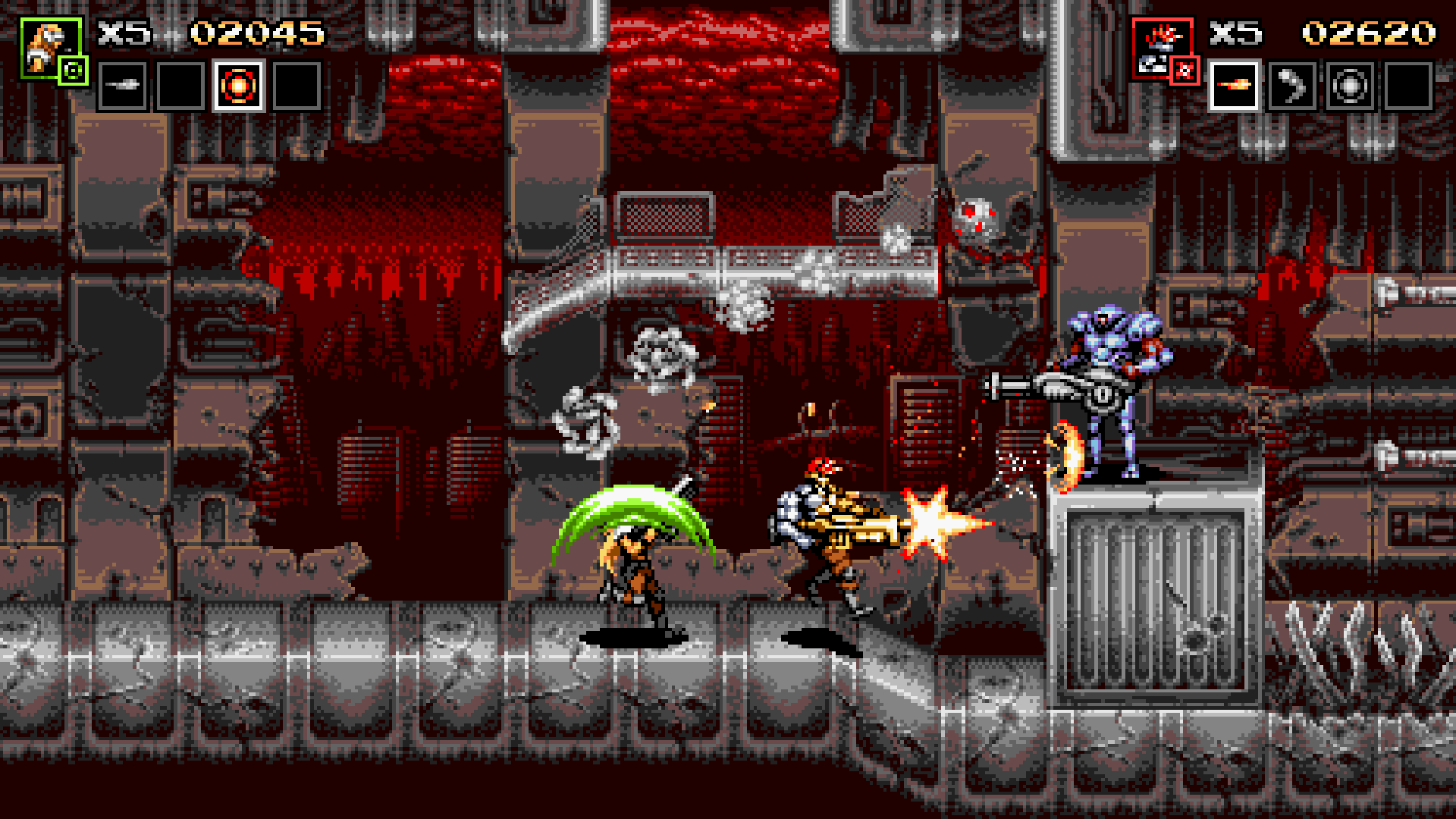 While the story doesn’t really matter, it has one. Machines are now ruling the world, and have put most of the planet’s humans into extinction. In a last ditch effort to save humanity and overthrow the oppressive machine lords, a group bands together to do the impossible. You’ll be running and gunning, motorcycle sequences, and even jetpack sections that round out the gameplay that are focused squarely on the shooting. Blazing Chrome is full of 80s machismo and can-do attitudes. It’s do or die, and doesn’t matter who does it first.

This is a game where you lose a life in one hit. It’s tough as nails, and is eager to show that to you. When you die, you lose a life from your pool. The number of lives you have are determined by difficulty. From the start, you only have Easy and Normal. Easy starts with seven lives and has more bonuses, but is not eligible for the in-game leaderboards. It itself feels a bit too easy at times, but still offers a challenge where it counts. Normal is where you’d want to start, and it puts up one hell of a fight, but you’ll only have five lives per level. If you run out of lives, you have infinite continues to keep trying. It’s defeating to die, but you’re never reset too far back. 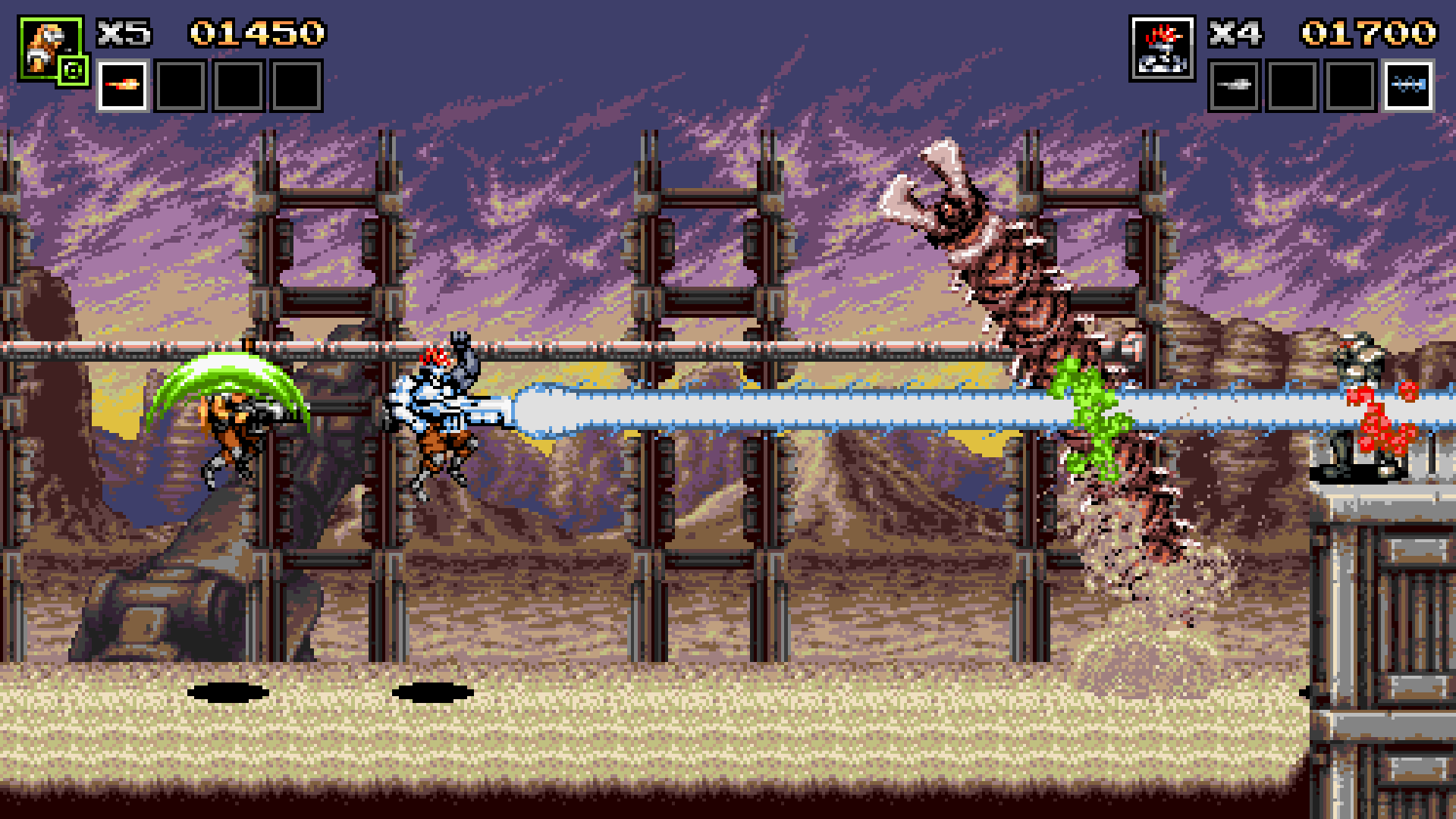 You can choose any of the first four missions in any order you like, but they are sorted by difficulty. It is strange that Mission 2 is a harder difficulty than Mission 3, though the rating isn’t inaccurate. There’s five levels that take you across the dirty, dingy, neo-future dystopia that the robots have created. These levels are broken up into three parts, and you know when you’ve reached each. They aren’t especially long levels, but due to the difficulty, tend to feel longer than they are. The game can be completed in 40 minutes, or so says an in-game achievement. Each new section is where a checkpoint will take place for you to restart from, even if you run out of lives altogether. The checkpoints don’t diminish the challenge the game is meant to impose. In fact, I think its the one thing Blazing Chrome can do to be nice to you throughout.

There are four weapons. You have your basic machine-gun that you’ll always have, then pick-ups such as the wave-gun, grenade-gun, and railgun. Each has their uses and its intuitive to know when and how to use them. Upon death, you lose a power-up until you’re left with the default gun. The default gun does a solid job, but is hardly a pea shooter and the extra and different firepower makes a difference. In each level, there are two mini-bosses and one end-level boss. Once you beat the game, you then unlock some new characters, a Mirror Mode, and most excitingly a Boss Rush mode. 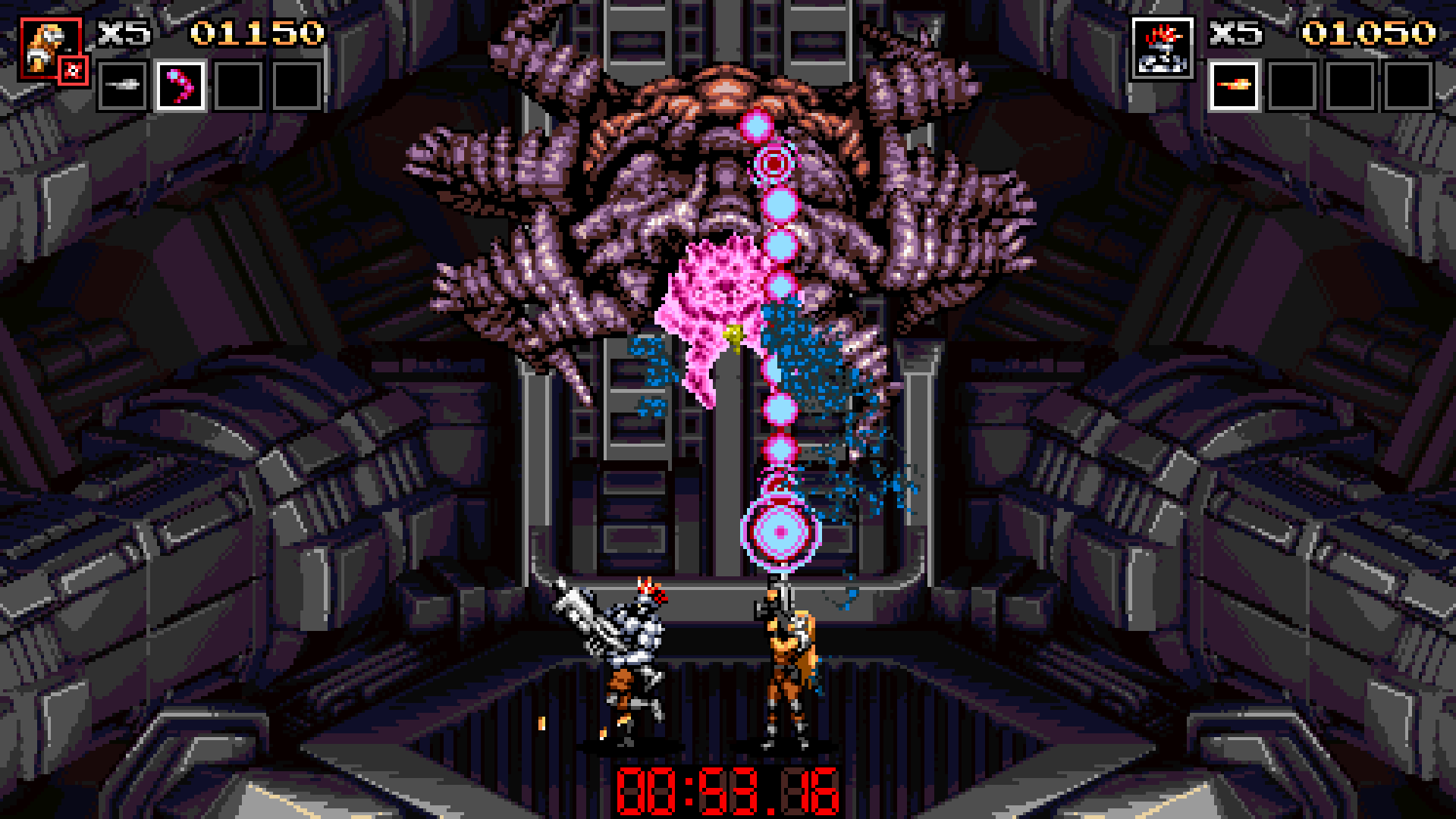 Blazing Chrome looks fantastic in 16-bit, with some creative liberties that puts it in your native resolution and other things that it couldn’t do with its pixel art. On top of that, just like the previous JoyMasher games, there are graphics options to change the filtering on how the game looks. You have the option to add a CRT filter, a CRT filter with tube TV effect complete with scanlines, and 5XBR which is a shader effect to sharpen things, or otherwise make the image super smooth. It all helps to make the game look how you want.

There are leaderboards that’ll track your score, but only on Normal and Hard difficulties. On Easy, leaderboards are disabled because you’re likely to get a high score for obvious reasons. The game scores based on time, lives left, and so on. The game has local co-op for you and friend to blast through levels, and after only playing solo, seems like co-op is the best way to play. Solo can be frustrating, but a hollow experience. 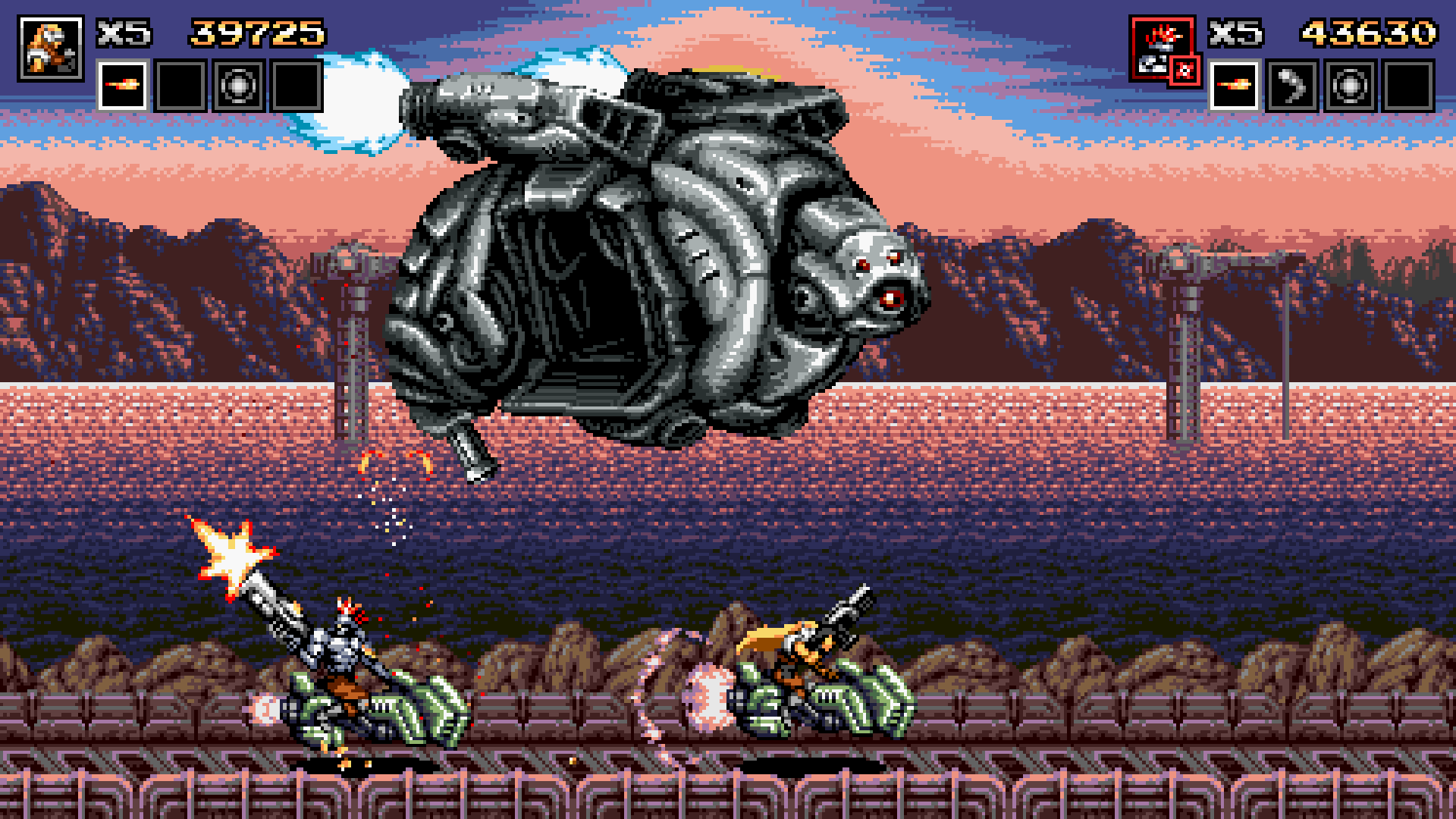 Depending what difficulty setting you select, Blazing Chrome can either be too easy or too hard, thankfully it is endlessly replayable alone or with a friend. Blazing Chrome is my favorite from JoyMasher yet, and it is on-par with the challenge of their other releases. This is a 16-bit game with an 8-bit challenge that makes for an instant classic. In turn, it stays authentic to the era in terms of difficulty, presentation, and feel. In Blazing Chrome‘s case, this is an exciting game that nails the era with an 80s and 90s feel that’s perfectly complimented by its gameplay and even end-credits song.