Rise: Race The Future is unlike any racing game I’ve played before. This is a game trying and doing new things at every turn. It’s a game that defies expectations and focuses on the fun. It does come with its fair share of problems and frustrations along the way, however. While Rise: Race The Future reminds me of classic arcade racers like SEGA Rally, this certainly feels like one of those games, but the lackluster controls put a damper on what is an otherwise excellent game. 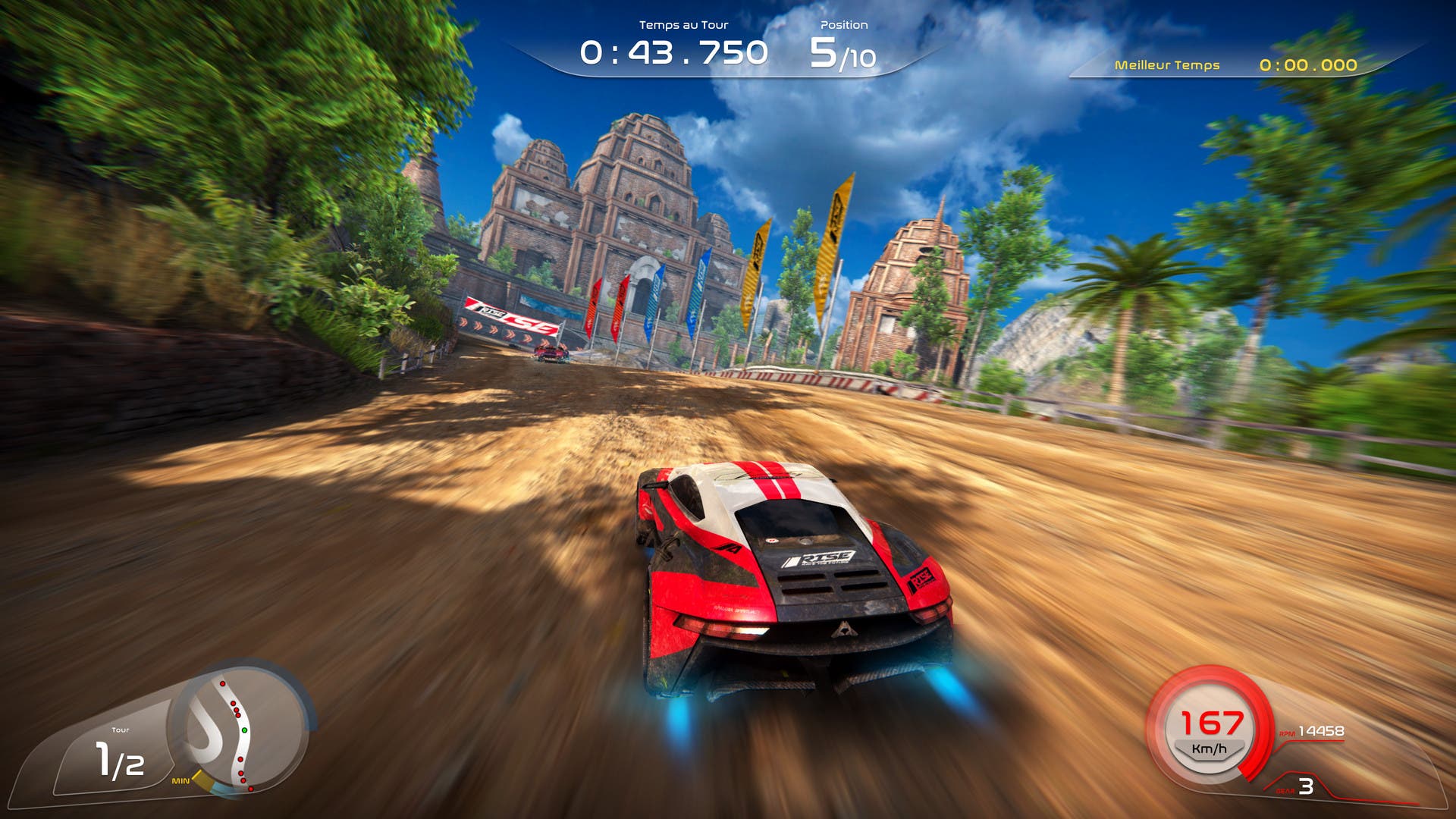 Editor’s Note: This game was reviewed with the current version of the game: v1.2

Rise: Race The Future closely resembles rally racing, but reimagined and sent to the future. It may be hard to tell with fancy looking cars and setting, but this is a game where you drift in dirt, snow, and you never lay a tire on a city street. It’s a neat twist on an old design. And given the developer’s pedigree, comes at no surprise that they’re able to shake up racing games in this way. Rise is like two different games, split into two main modes. The game is broken up between Challenge and Arcade. Challenge mode is season-based racing with specific challenges that don’t rely on finishing position to progress. It is token and points-based. In Arcade mode, you can choose between Championships and Time Attacks, here you need to focus on speed and getting first, and don’t have the distractions of challenges.

The game features four difficulties, and it can be changed at any given time, should you find the challenges or the AI too tough. The game is currently on PC via Steam and Windows Store, as well as Nintendo Switch. It’s worth noting that this game is also VR capable, supporting Oculus Rift, HTC Vive, Valve Index, and Windows Mixed Reality.

With Challenge mode, there’s over five seasons of ever-increasing challenges to complete. The challenges are pretty straight forward like beating a certain time, don’t let a certain racer beat you, do X amount of drifts, and so on. The selected difficulty affects challenge objectives you’re given. One of the coolest parts, is that you don’t have to complete all objectives in one go. If there’s a challenge that asks that you don’t use boost, but wants you to also get a fast time, then you can do the race without using boost, then restart the race and use boost to get the time. It’s possible to get all challenges in one go, but in the event you can’t, you’re not out of luck. You can even go back and complete prior challenges with faster cars you’ve unlocked. Progression is gated by R coins and fans, earn the requisite amount to move on. It’s a really fun mode that you’ll probably spend most of your time in.

With Arcade mode, you have time trials which just lets you race on any track for the best time. It’s a pretty bare bones option, but great for those who like to practice and have the best laps possible. With championship mode, there’s eight in total, with nine races in each. That’s…a lot of racing. And this is pure racing, no challenges, and it’s point-based on position. This too is a bit simple, but of the challenge mode is getting the better of you, more traditional racing purists will enjoy this more. 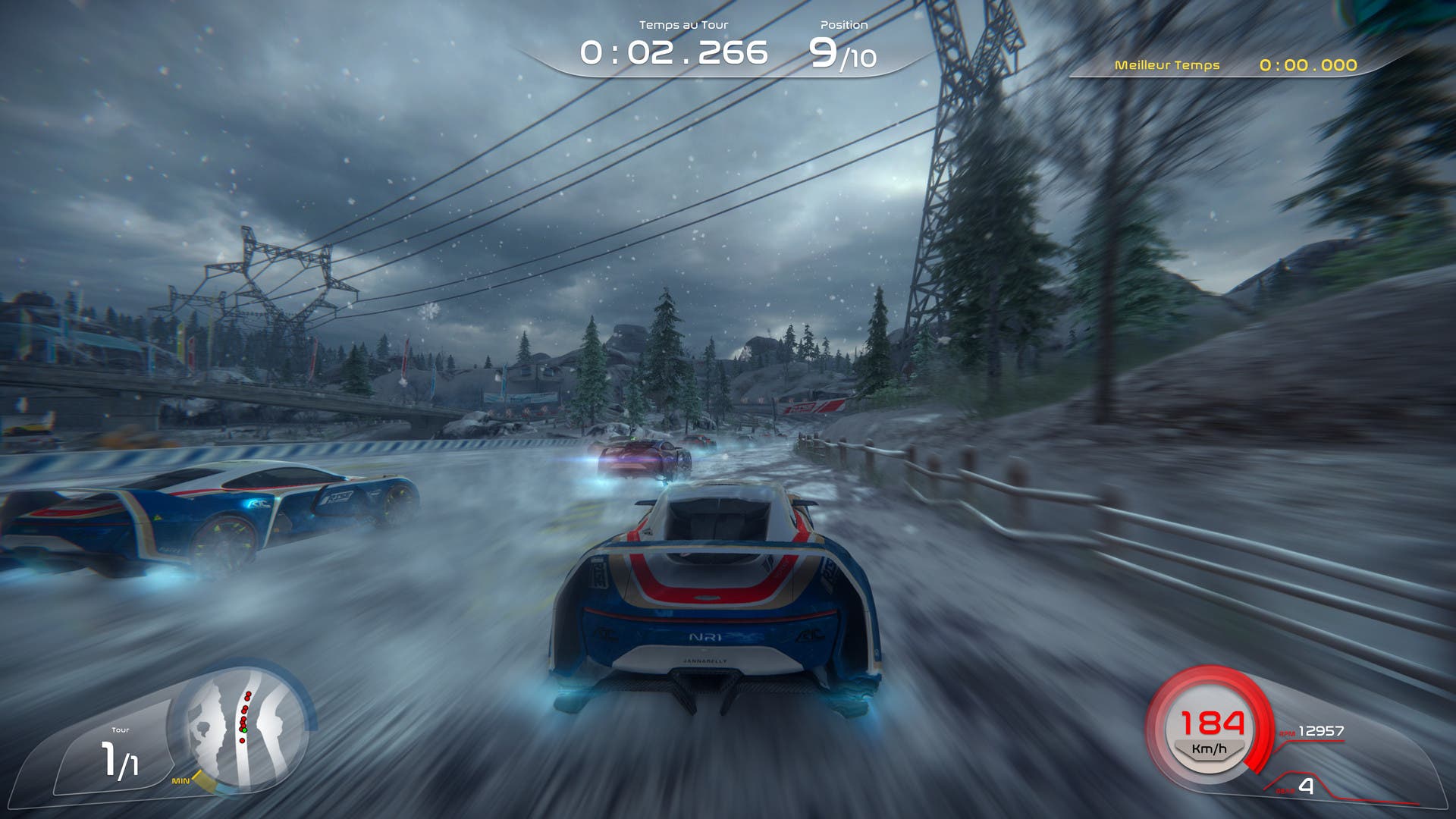 One of my early frustrations was realizing Rise: Race The Future is hard to control. The early cars do not feel good to control. It’s too easy to spin-out the AI, and get spun-out yourself – it doesn’t help the AI is a tad aggressive. If you hit a wall, you pinball off of it and either spin-out or crash into the adjacent wall, and it’s pretty much race over right there. Any chance you have of getting first is likely gone. It almost feels like you can’t counter-steer a drift. Later cars correct this feeling, but makes the early going unnecessarily frustrating. Visually, it seems like the handbrake and brake are reversed? According to the controls, left trigger is brake and handbrake is X. However, when I press brake, no taillights illuminate. When I press handbrake, the taillights come on – this seems backwards.

This is a game with futuristic electric vehicles, but what’s an interesting mechanic amongst seeing these vehicles drift on dirt and snow, is that they hover over water. So there will be spots, or whole sections of tracks where you’re over water, and it’s just such a unique sight and of interesting variety. What hurts the game, is the minimap spaghetti. The minimap features all possible routes, without darkening unavailable or impossible routes, resulting in a lot of confusion and hard to follow sections of map that shouldn’t be present. 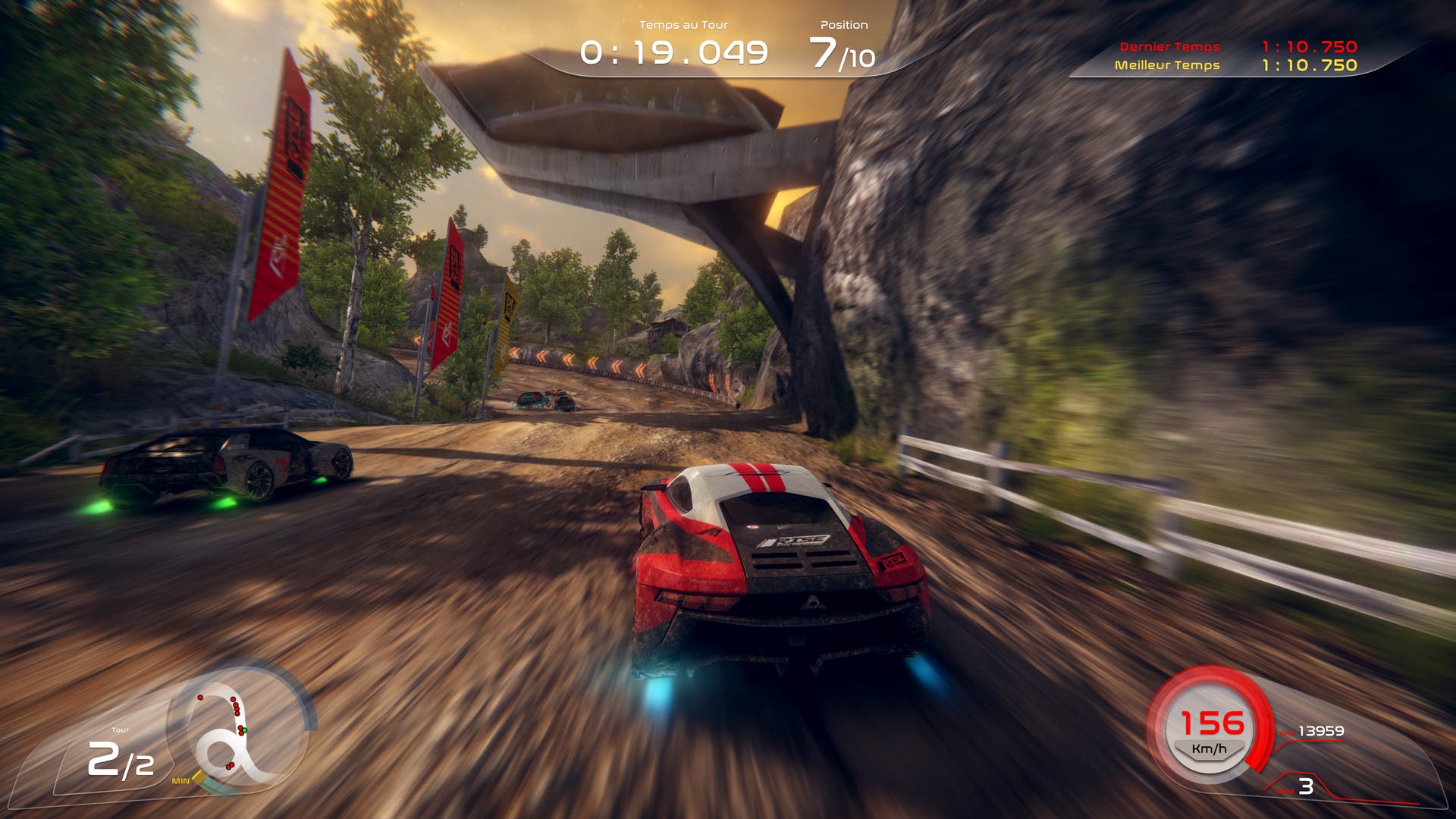 There’s ten vehicles in total. And with so many early vehicles lacking any feeling of control, getting to the latter cars is rewarding, but exhausting. Since you’re doing a lot of driving in this game, there’s three types of boost collection: speed, drifting, and full charge at the start of the race. This type of boost caters to all types of players, allowing them to play how they want. There’s also a healthy amount of color and livery options to help put your mark on the track by looking different than the rest of the pack.

The game features only four locations, which doesn’t seem like a lot, but the game utilizes them to the fullest. If it wasn’t apparent by now, Rise is an absolutely colorful and vibrant game, but not purely saturated. These beautiful vistas span mountains, forest, and deserts. You’ll be seeing clear skies, cloudy skies, snow, rain, fog, and sunsets even. The track variety in environmental details alone are what keeps the game feeling fresh with each new race. 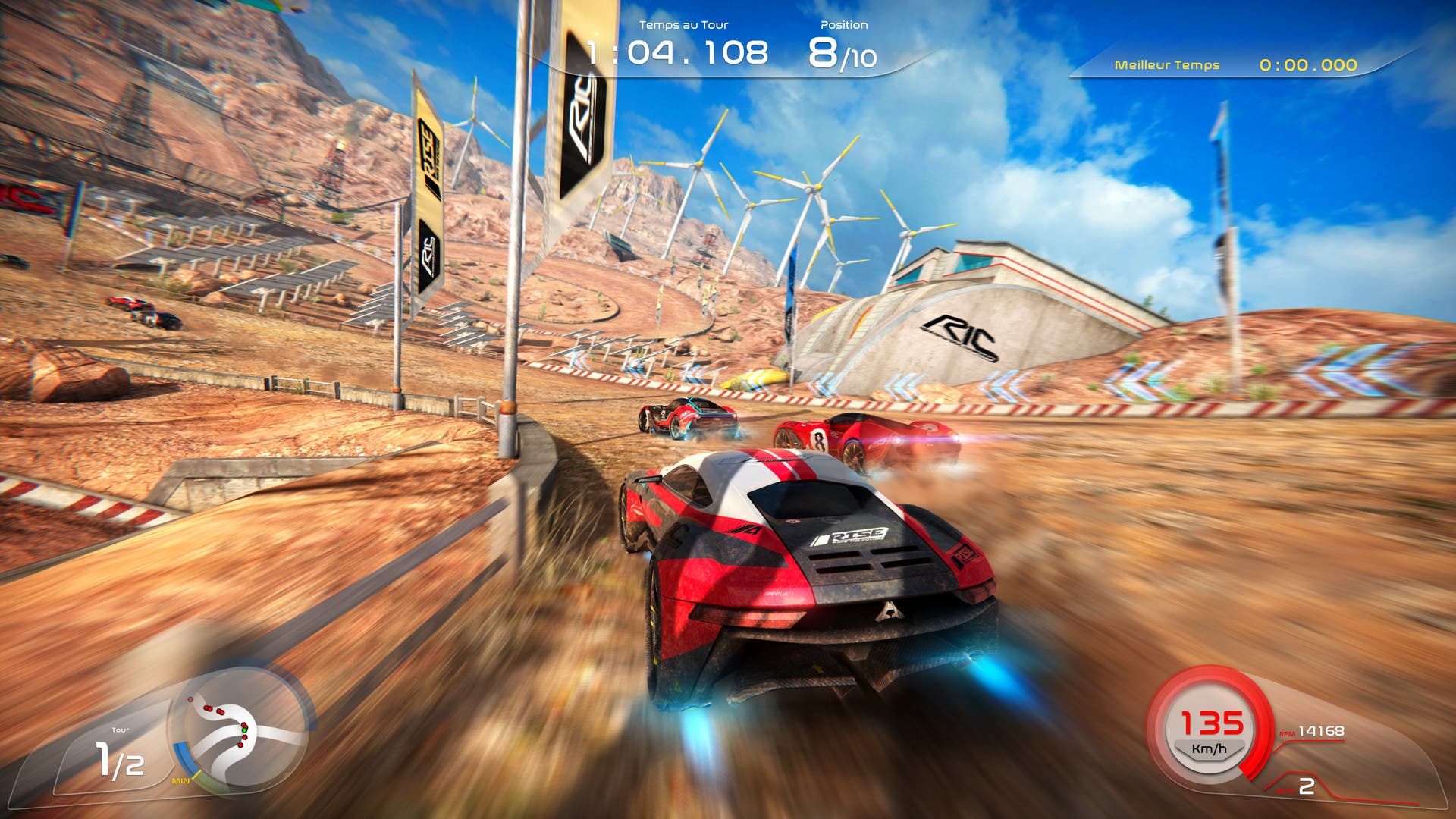 As it stands, Rise: Race the Future is a unique arcade rally racer that looks amazing, but doesn’t play like it should. There’s some weird decisions on how the minimap looks, or how the controller selects things in the UI, but those are minor compared to the controls. The controls are the biggest turn off, and only one or two cars out of the roster feel “good”, which come late into your playing. So if you can get past the first few hours, you’ll have a good time. And the game is constantly being updated, so I look forward to future updates and improvements.