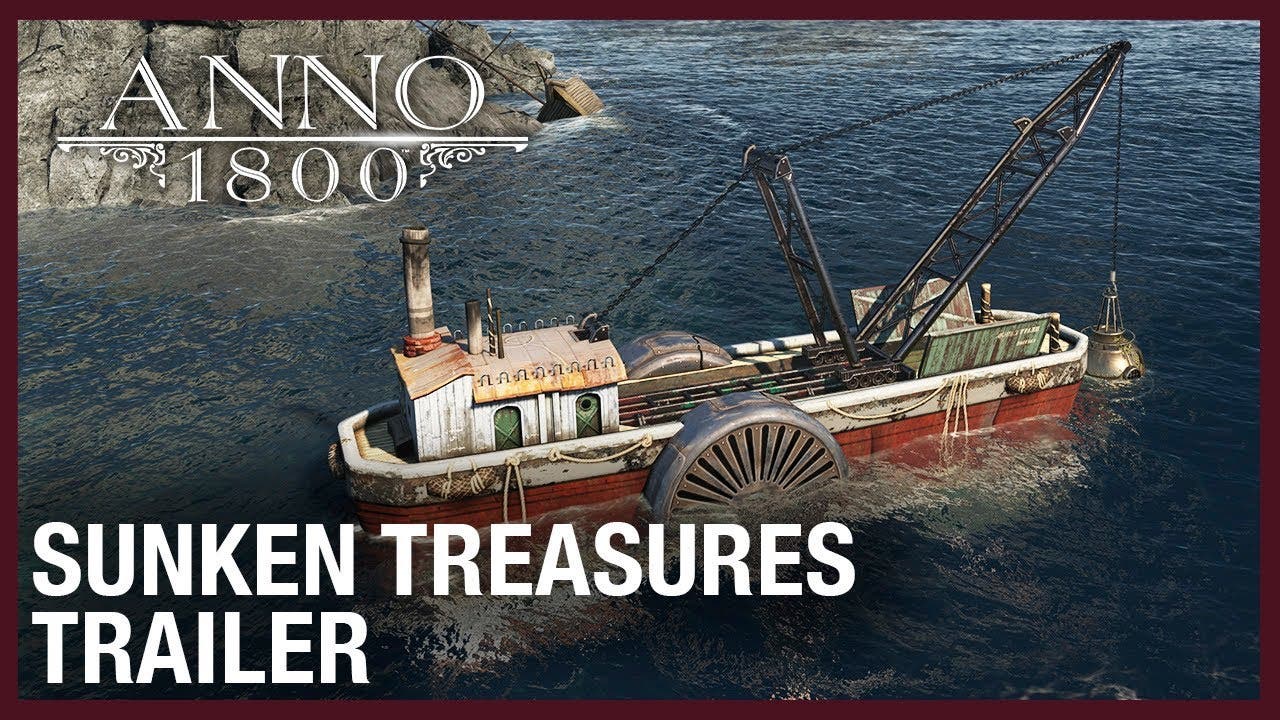 SAN FRANCISCO — July, 30 — Today, Ubisoft announced that Anno 1800, the latest installment from the successful city-building and strategic franchise, is releasing its first DLC, Sunken Treasures, on Windows PC. In addition, Ubisoft revealed the Gold Edition of Anno 1800 which combines the Digital Deluxe Edition of the game and the Season Pass.

Sunken Treasures will set players on a quest for glory and riches, as they write history, erecting a new capital to bring a declining empire back to its former glory. Sunken Treasures’ epic new questline will give players access to a whole new European session: Cape Trelawney. Three times as large as the biggest islands of the main game, this colossal landmass comes with 300 grids worth of coast and more natural resources and fertilities than ever before.

Sunken Treasures introduces a new Third Party character: Old Nate, a shabby-looking scavenger and inventor who prefers the company of his own automatons. In addition, players will now have access to a new game mechanic, revolving around the inventions of the quaint scientist: crafting. Armed with one of his groundbreaking inventions, the new diving bell steam ship, Old Nate will send players on a hunt for sunken shipwrecks to bring him the construction materials needed to finish his experiments. In his workshop, players will gain access to a large variety of items to create to maximize the potential of their empire.

Sunken Treasures brings over 100 new items to Anno 1800, including new quest items, dozens of inventions to craft, additional specialists and new sets for the museum and the zoo.  In order to play Sunken Treasures, players must have reached the 3rd Civilization Level.

Developed by Ubisoft Blue Byte, Anno 1800 provides players with countless opportunities to prove their skills as a ruler. Players can create huge metropolises, plan efficient logistics networks, settle an exotic new continent, send out global expeditions, and dominate their opponents by diplomacy, trade, or warfare. Anno 1800 post launch plan offers new adventures, challenges and tools to the players. The Season Pass includes three DLCs to be released throughout the year including Sunken Treasures, Botanica and The Passage. In addition, regular updates will bring new free content available for all players.

For more than two years, Anno 1800 has invited players to take part in the creation and the development of the game by giving feedback through the Anno Union. So far, more than 160 blogs have been published, 15,000 comments posted and 5 community contests organized. This collaboration between players and the studio enables the development team to shape the game and add requested community features.

Anno 1800 is available digitally on the Ubisoft Store and the Epic Games store for Windows PC. Sunken Treasures can be purchased as part of the Anno 1800 Season Pass for $24.99 or individually for $11.99 and is downloadable for players who already own the Season Pass. In addition, players can now purchase the Gold Edition of Anno 1800 including the Digital Deluxe Edition* of the game and the Season Pass.