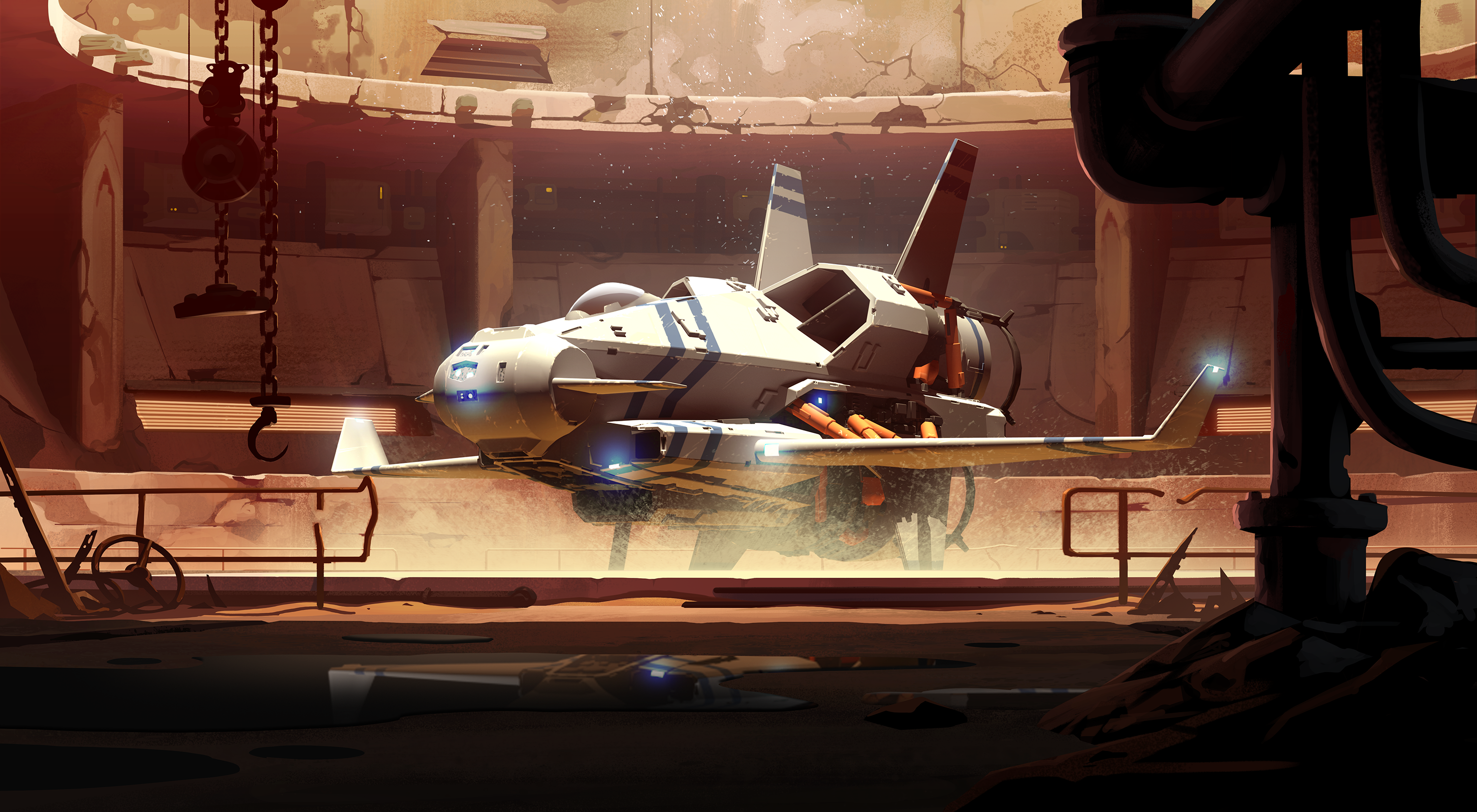 Rebel Galaxy Outlaw is the long-awaited follow-up and prequel to 2015’s Rebel Galaxy, expanding on the universe that was introduced with that game. Rebel Galaxy Outlaw ditches the 2D plane, adds a first-person cockpit, and sports a look akin to X-Wing vs TIE Fighter that no other game has done since that series. This is a game teeming with things to do amongst a galactic vastness, and Rebel Galaxy Outlaw delivers on all fronts in being an excellent exploration, space combat, and trading game you’ll love the moment you take flight. 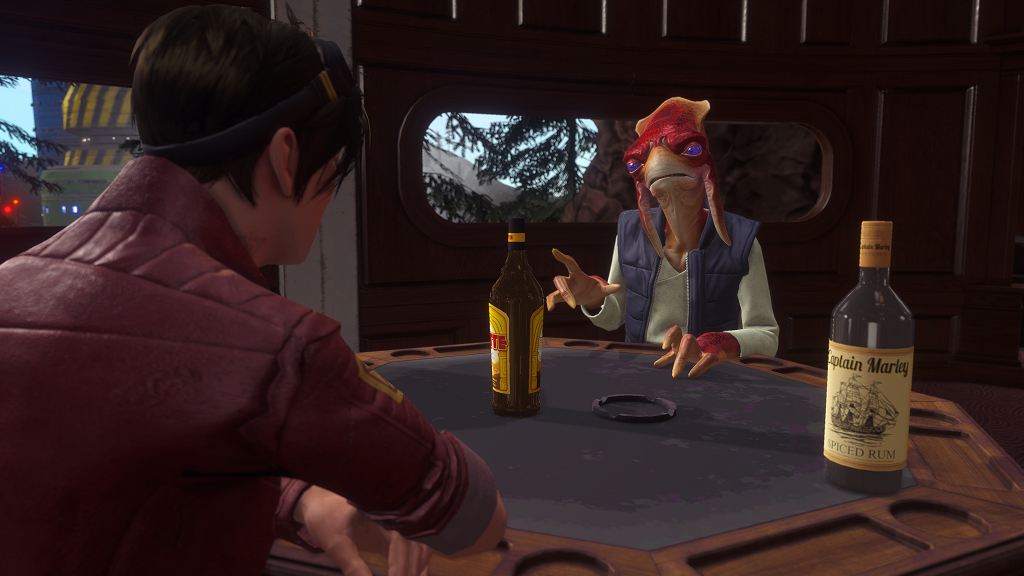 If you recall, you spent most of Rebel Galaxy looking for your lost Aunt Juno. In Rebel Galaxy Outlaw, you are Juno Markev in her younger days. The intro does a good job at setting up the scene: she’s lost her husband and crash your ship in the Dodge sector. Once you reach out to some contacts, you’ll set out to go from rags to riches in an effort to get some good old-fashioned revenge. The story is there if you want it, but it can go by the wayside if you choose. The story missions are crafted, compared to the contract missions, but they tend to not be very memorable. This is in contradiction to games like X-Wing vs TIE Fighter, Freelancer, Privateer, and even DarkStar One it’s inspired by.

Being a space game, you’ll visit many outposts and stations. Each area is unique in its look, and you’ll be treated to a nice cutscene for takeoff and landing. Since you start off in a space station, you’ll be able to play mini-games without first touching the cockpit. The mini-games include but are not limited to 8-ball, arcade, dice, and slots. You can’t walk around these stations, but they are menu-driven in a way that makes sense to navigate in this way. This early on, you can play 8-ball with someone eager to offload a ship part that would normally cost you thousands. This teaches you to investigate each feature to see what dialogue or options are available to you. 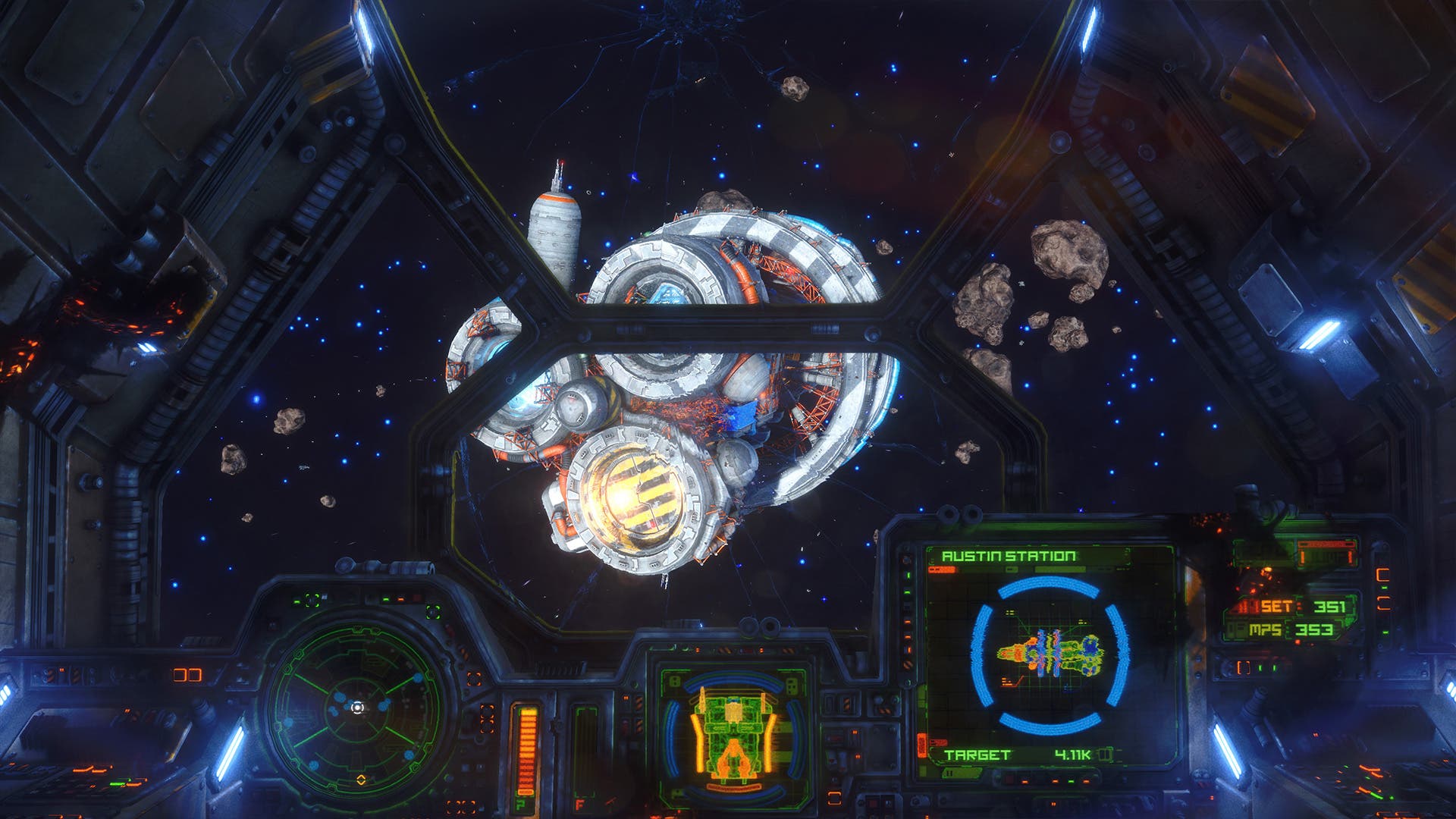 The primary missions, if you take them on, advance the story with little to no reward. Contracts on the other hand, is where you make your money. They are structurally similar to Rebel Galaxy, often asking you to deliver something, kill pirates, or escort a ship through an area to name a few. The mission board is constantly and endlessly populated with these. Money hard to come by, even hours in. So there’s a bit of a grind, but this can be circumvented by your own growth and means of exploration. As you start building your network, and heading to new areas, these areas will offer higher payouts. The repetitive missions are fine, but wear out their welcome sooner than later. It doesn’t dampen the experience, but does take you out of it.

The ship you’re given as a replacement for what you had is the equivalent to a flying toaster. It’s a converted trash hauler that is not very pretty to look at, and not the best at combat. It’s great at being a cargo vessel though. Rebel Galaxy Outlaw features five ships at the start, with four more that become available for purchase if you explore all options. Each ship is designed for either being a trading / cargo or combat. When you get enough cash to upgrade away from that trash toaster, it’s feels like upgrading from the Eagle 5 in “Spaceballs” to The Benatar in “Guardians of the Galaxy”. There’s no garage, so once you upgrade, you sell off the other. It’d be nice to have a place to store at least one other ship. You can swap at-will, and get credit back for downgrading to a cargo-focused ship, but it seems inefficient. 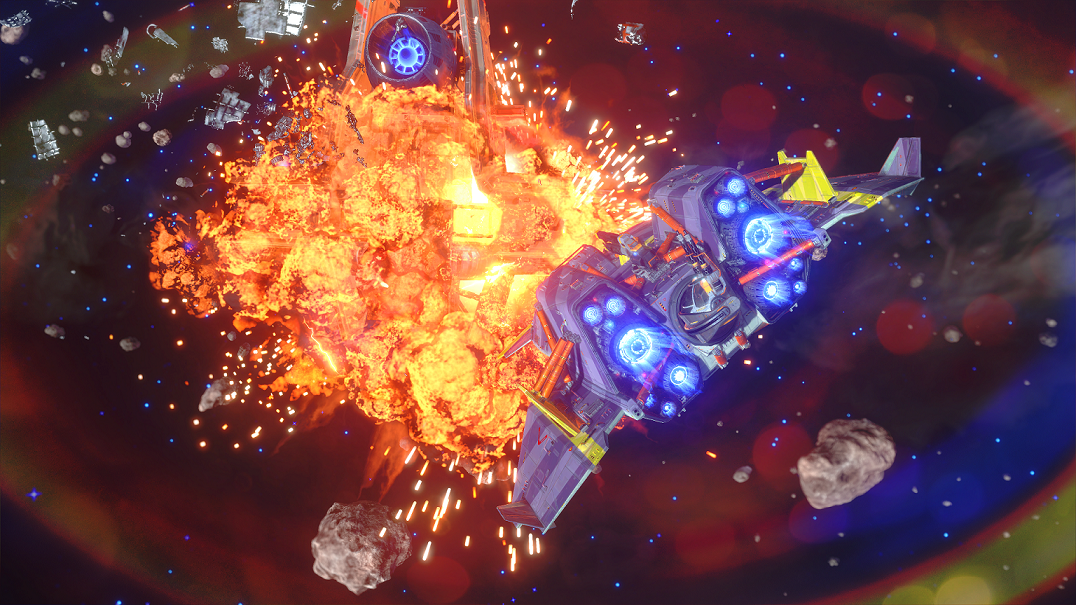 While you have option to play a bit more passively, combat is everything here. You’ll need to manage jules running through the ship, as well as shields, weapons, and engines. You can buy upgrades for your ships, but some ships can’t hold higher end powerplants despite having the cash to do so. If you have the capacity, you can buy anything you want, but you’ll have to be mindful that your weapons don’t draw too much power, reducing your ability to fire more frequently. Once you’re out there, you can lock your targets. A new feature I haven’t seen anywhere else, is called autopursue. It lets you not only lock onto a target, but the game will manage throttle for you, and autodrive your target to reduce the chasing that can ensue with most dogfights. If you destroy a pirate or enemy combatant, they’ll drop cargo, or even eject themselves into space. You can then use your tractor beam to capture them for imprisonment at the nearest outpost, or take their cargo to sell off. Should you be overwhelmed, you can call in a buddy to come help you out and be a wingman.

You can either take on the life as a merchant or a mercenary, and can do so officially by joining their respective guilds. No matter which you choose, both are the ways to make money and you’re not beholden to one or another, but the way you spec out a ship certainly is. For traders, prices are shown in the map view with their “last known” price when last you visited, so you have an idea what things could be by the time you arrive. Pirates will frequently be scanned by the police for contraband, so it’s wise that you fly through systems that don’t have much law enforcement, and as such you’ll have a wanted level based on your nefarious actions. All in all, it makes things efficient that previously weren’t. In the end, you’ll maintain a reputation that rides the middle, or moves to one end of the spectrum that’s entirely up to you. This level of freedom is what you’d expect. 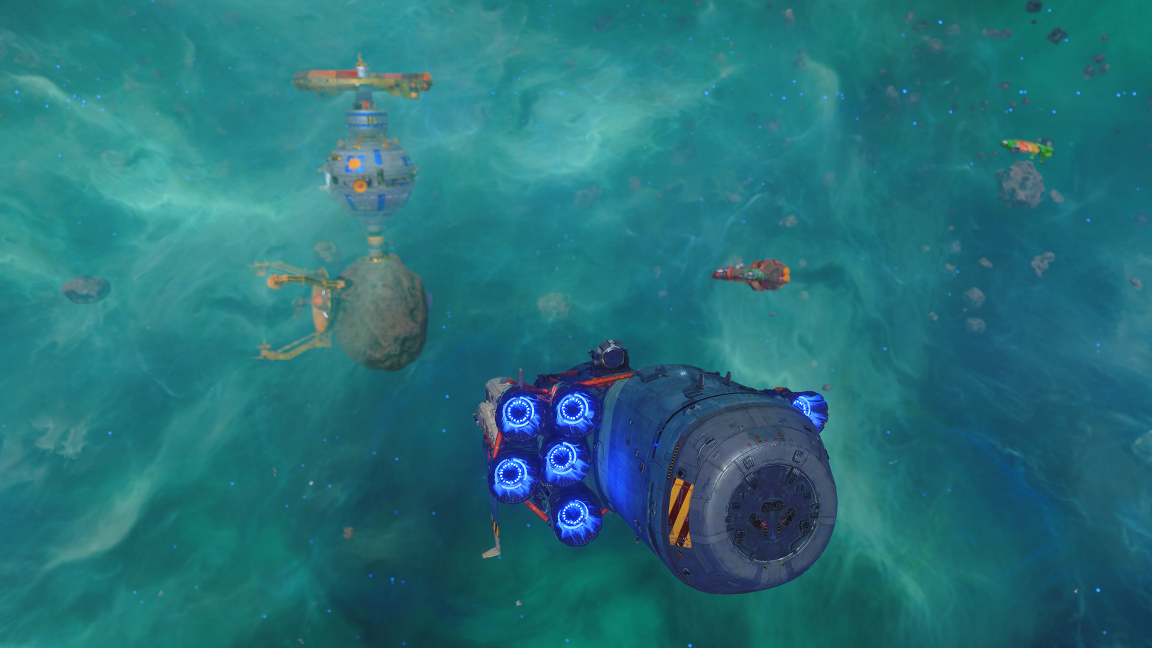 Flying out and about, you’ll have to make some serious jumps in-system to get around. You can use the handy autopilot feature that will just fast travel you to your waypoint, or you can manually use sublight to travel. Either way, you may be dropped out for nearby craft, or a distress beacon begging for your attention. Answering beacons either is an ambush or helping someone legitimately in trouble, and never really deviates from that. Your scanner becomes most helpful in determining if there are too many enemies to engage with. The next mode of travel is using the jumpgates, which are spectacular to view, and not like any other game.

There are two maps, a system and galaxy map. There’s tons of systems and worlds to visit, each based on the United States with their naming. It’s worth noting that the map is static, and not procedural this time. It makes for exciting conversation among friends as you talk about your discoveries, and where they can find them. Exploration can lead to opportunities for making money a lot faster to avoid the aforementioned grind, just by visiting a neighboring system adjacent to the starting one. Rebel Galaxy Outlaw takes things one step further with the paint tool. It looks and feels like Photoshop Lite, and it lets you listen to the in-game radio while you work on painting your ship. It has a model painting feel to it all, especially since you can 3D print them (at a later date). You can use brushes, crayons, and airbrushes to design something entirely your own. There’s also stencils to place, or importing your own images. It’s highly detailed, and is exciting to work on.

The radio is really good, and improved over the original game, with a purported 24 hours of music to listen to. Custom music is still an option, and I’ve tried using “Guardians of the Galaxy Awesome Mix”, “Battlestar Galactica”, and “Firefly” like I did with the first game, but this has so much of its own flavor I didn’t want to mess with what felt more in-universe. One thing to note is that most of NPCs you interact with, are voiced by developer Travis Baldree. It’s far from a big deal, but it is noticeable. 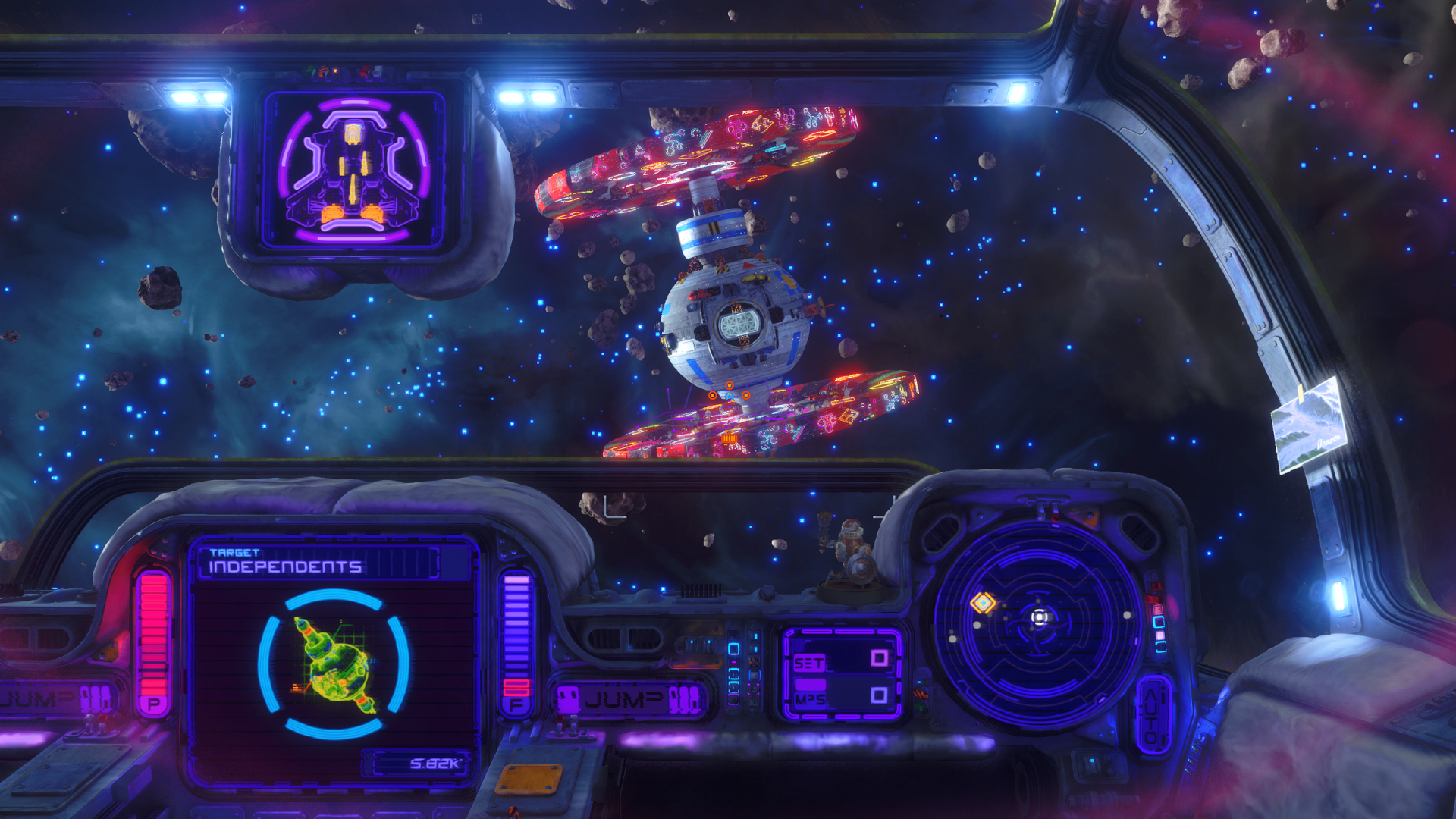 The game supports the three main control setups you’d use. Keyboard and mouse? Yep! HOTAS? Sure! Gamepad? Please! The developers explicitly say that gamepad is the best way to play the game, and I’m inclined to agree. However, I played most of the game on a HOTAS with the Sim difficulty (third highest). However, playing on Veteran with an Xbox One controller did feel pretty good. Mouse and keyboard is solid, as I messed around with that a bit to get a feel, and it works a lot better than you think.

The cockpits in this game are absolutely gorgeous. There’s tons of LEDs, knobs, switches, and buttons you want to interact with. You can view your radar, power, fuel, shields, hull, map, speed, and more, all at a glance. Even the glass of the cockpit has imperfections as you fly more and more with the same ship. Each ship has its own color scheme, and everything has a wonderful glow. It’s hard not to see the similarities between this an the X-Wing series when you’re in it. So this is to say that you can switch to an external third-person view, but it doesn’t add to the experience like the first-person view does. Rebel Galaxy Outlaw has a rather clumsy interface, but nothing you can’t get over in a few hours time.

Rebel Galaxy Outlaw is very much its own thing, taking the best parts of the prior game and putting it in a new perspective. It evokes Privateer and Freelancer vibes, with the look of X-Wing spectacularly. It’s an accessible arcade game that has a lot of repetition in its loop, but that gameplay is really fun. There’s so many secrets to discover, and places to explore, that even dozens upon dozens of hours I haven’t seen it all. Rebel Galaxy Outlaw is one of better games I’ve played this year.