Never Give Up Review

Never Give Up is a cute and surprisingly encouraging platformer. Don’t let that spark of optimism fool you though, this is a brutal game that never gets easier than the level that came before it. Having not played the Give Up flash games, I didn’t know what I was in for. Having played this, I’m pleasantly surprised at what serves as an evolution to the platformer genre, full of blood and gore to a degree that I haven’t seen since Super Meat Boy. Never Give Up redefines what a platformer can be in 2019. 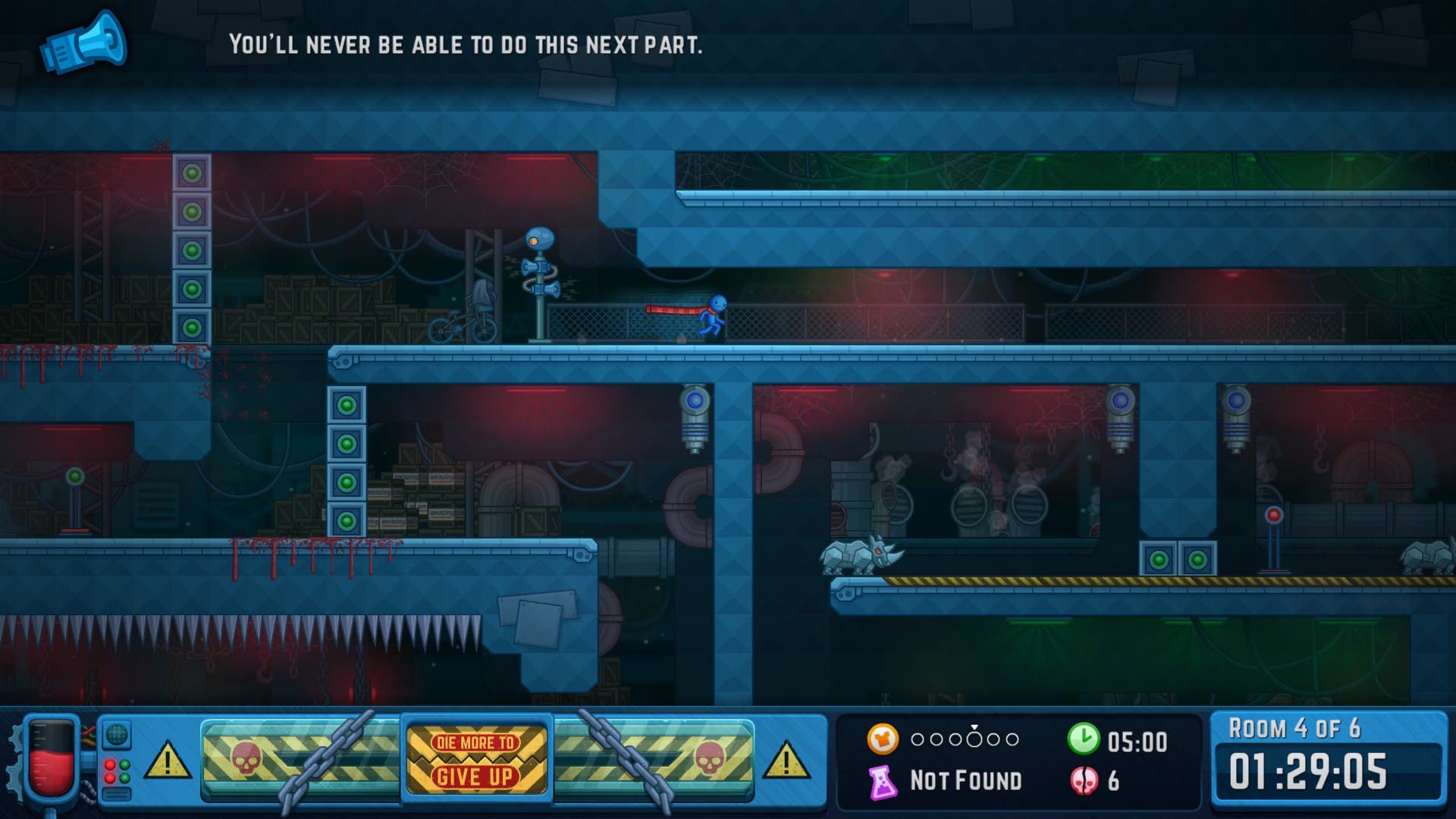 Never Give Up has ever-increasingly challenging rooms to partake in. The first stage of a given level is straight-forward; then you’re tasked to do it again, with minor alterations; and then again with another change tacked on. This continues until completion. These additions include, but aren’t limited to traps of blades jutting out from the ceiling and floor simultaneously, or hazards of spinning buzzsaws, or pitfalls of hidden blockades. By the end of the series of stages, you’re playing a completely different level with heat-seeking missiles after you. This right here is the core of the design to Never Give Up, and what gives the game its personality and charm.

Death is inevitable. Accumulate enough deaths, and you unlock the ability to give up. Despite the game’s title encouraging otherwise, this does become an option. You’ll either feel empowered to carry on to try to finish, or actually throw up the white flag and admit defeat. The feature is locked with every new level, that is, until the game collects the blood you spill upon each death. Once the cup runneth over, the ‘Give Up’ option is unlocked to use at your discretion. If you choose to give up, you’re met with a humorous screen that somewhat berates you, but focuses on the positive. Giving up does allow you to advance to the next level in the series, but the game slaps a “GAVE UP” stamp all over it to remind you what you’ve done. 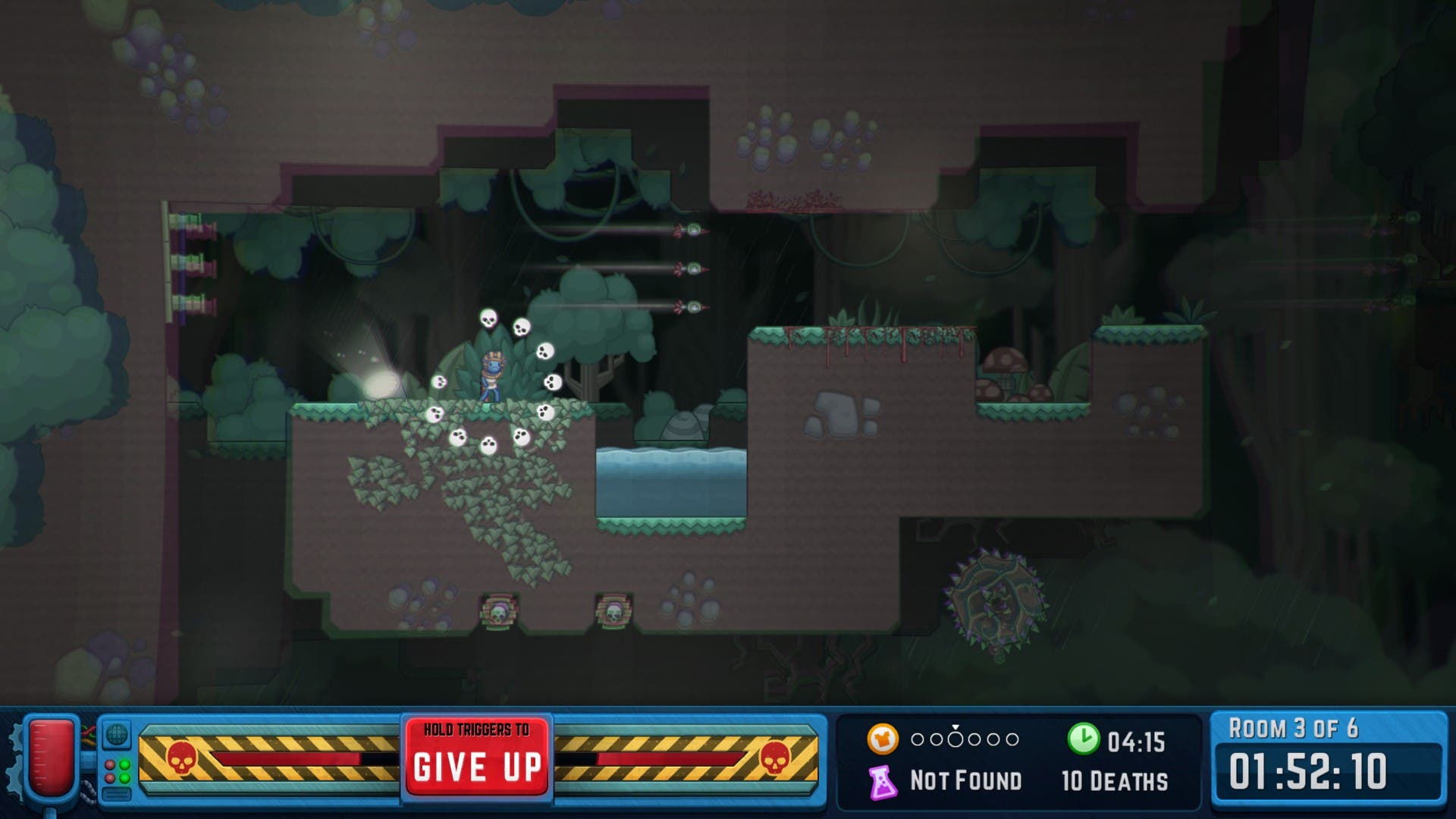 Despite its hardcore nature, the game does offer some additional accessibility outside of effectively “skipping” levels. You have three difficulties to choose from: easy where levels have checkpoints, hard where levels don’t, and permadeath where a single death sends you back to the beginning of the game. Outside of permadeath, you can toggle between easy or hard at-will, should things become too tough or vice versa.

The game features a variety of major areas that serve as the theme of the level, such as Basement, City, Crystal Caverns, and more. There’s roughly 250 stages split across all of the locations, where any given level has five to seven stages to get through, gauntlet-style. And these gauntlets sharply go uphill in terms of difficulty. These locations range from being cramped spaces to open-ended, never feeling the same from area to area. 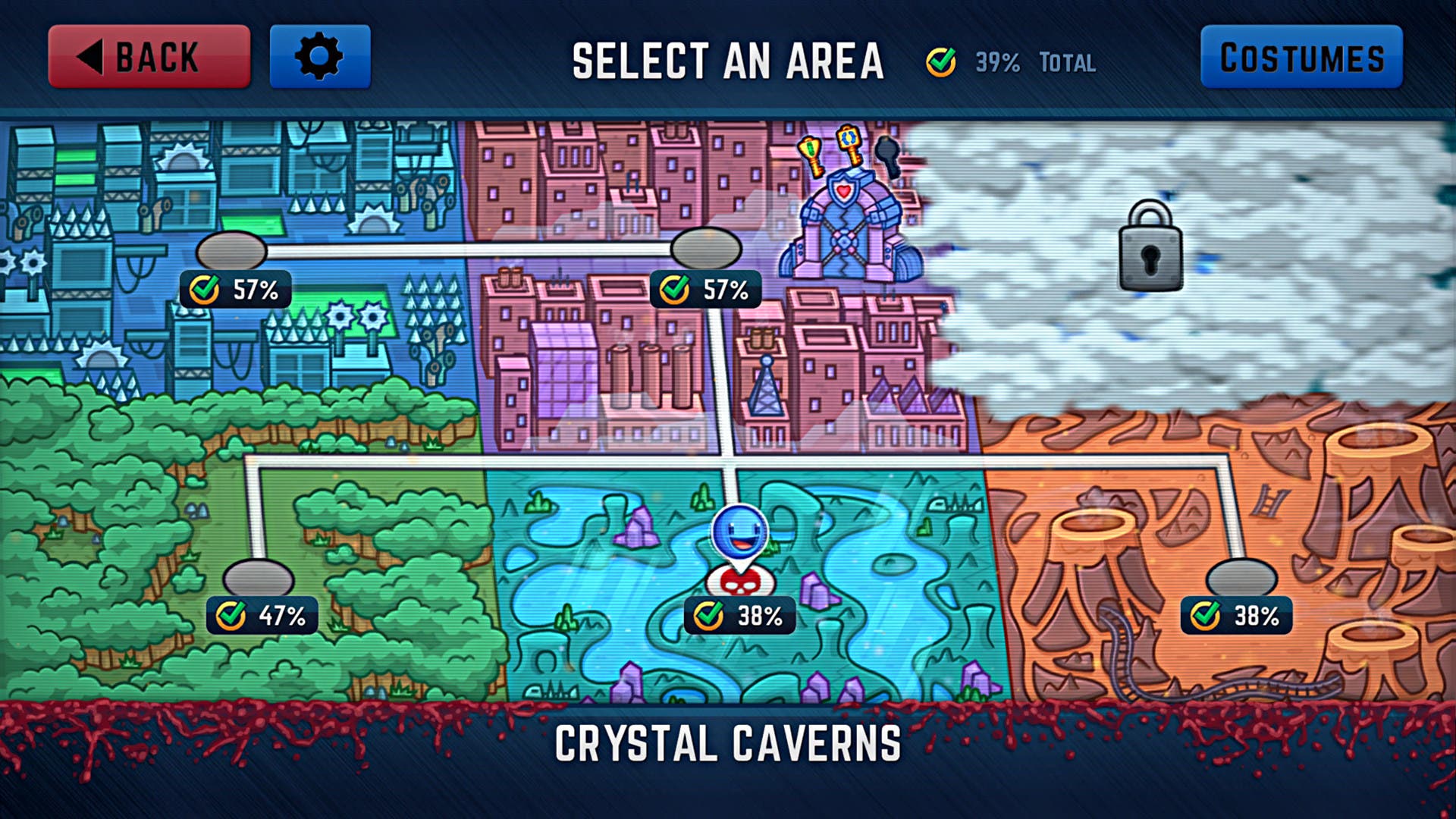 Upon completing a level, you’ll receive a rating in different areas: that you finished the level, doing so under a certain time, and finding all the items. If you’ve given up on a level, it disqualifies you from the leaderboards or having earned any of the collectibles. There are leaderboards for the levels you have completed, but there’s no sorting or filtering, which I hope that improves in a patch.

I played the game with a controller primarily, but I actually found the keyboard to be more than comparable. Considering its flash origins, it doesn’t surprise me. During your time with the game, you’ll heard some Deadpool-style, fourth-wall breaking narration. The ending screens also carry this as well. It doesn’t take itself seriously, ever. The game looks great, and has a wonderful art style and presentation, all by independent artist Jimp. Everything in the game has clean lines and vibrant colors, it’s just so wonderful to look at, even when everything is covered in blood. Playing on a 1440p monitor, I was kinda bummed the game maxes out at 1920×1080. I’d like to see this increased, if the art supports higher resolutions. 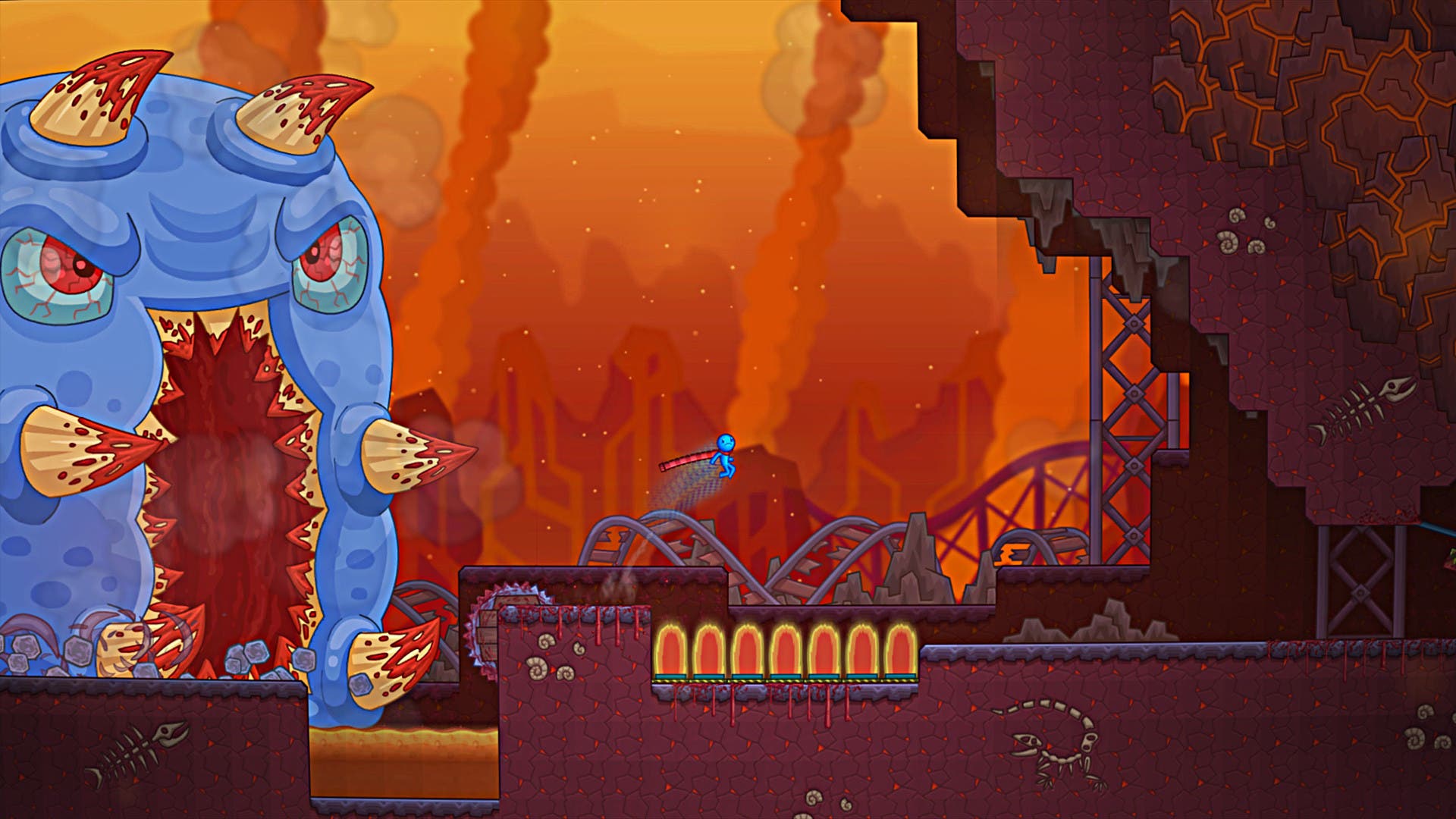 Each series of levels cap-ends with a boss battle. Because you don’t have any offensive capabilities, you have to use twitch-based platforming to avoid a barrage of one-hit kills. Each boss is different, but susceptible to the “rule of threes”, in that you need to do what’s necessary to open up pressing a button to inflict damage. The bosses are somewhat frustrating, but totally fun to take on, learn their patterns, and ultimately defeat them.

The game has many collectibles to find, some of which are accessible via hidden paths or extremely treacherous jumps that can mean certain death. There are costumes that will be unlocked by grabbing said collectibles. Upon beating the boss of a series, you’ll unlock a bonus level that has an increased level of challenge. This game keeps on giving with new stages. 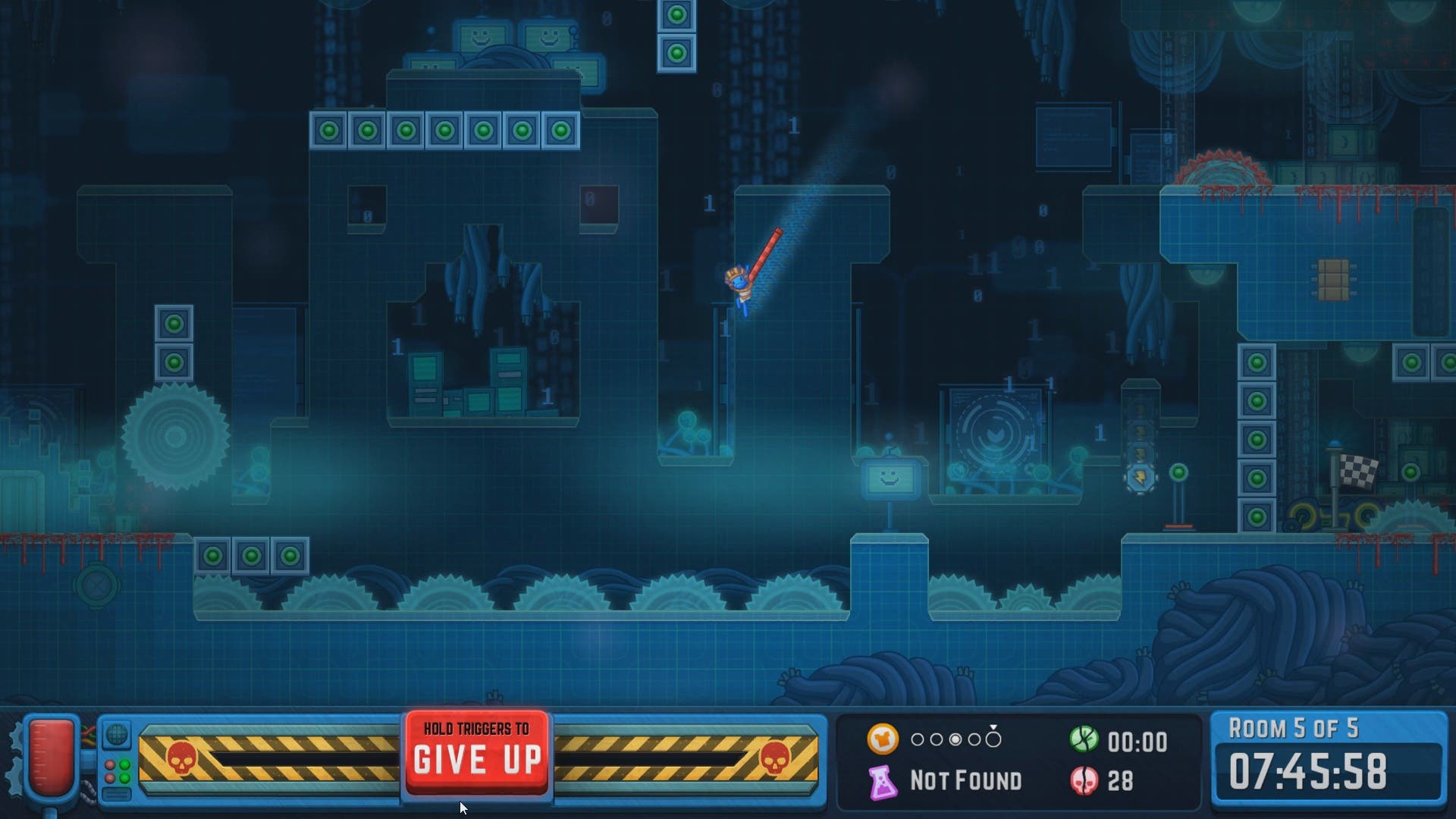 Progression doesn’t end with death or quitting. Never Give Up has a ton of personality to backup its excellent gameplay that shouldn’t be missed. You’ll find all of the staples of good platformers here: quick restarts, great art, blood, and awesome controls. Never Give Up does for platformers like what Super Meat Boy did to reinvigorate the genre years ago, by subverting expectations and evolving the genre.