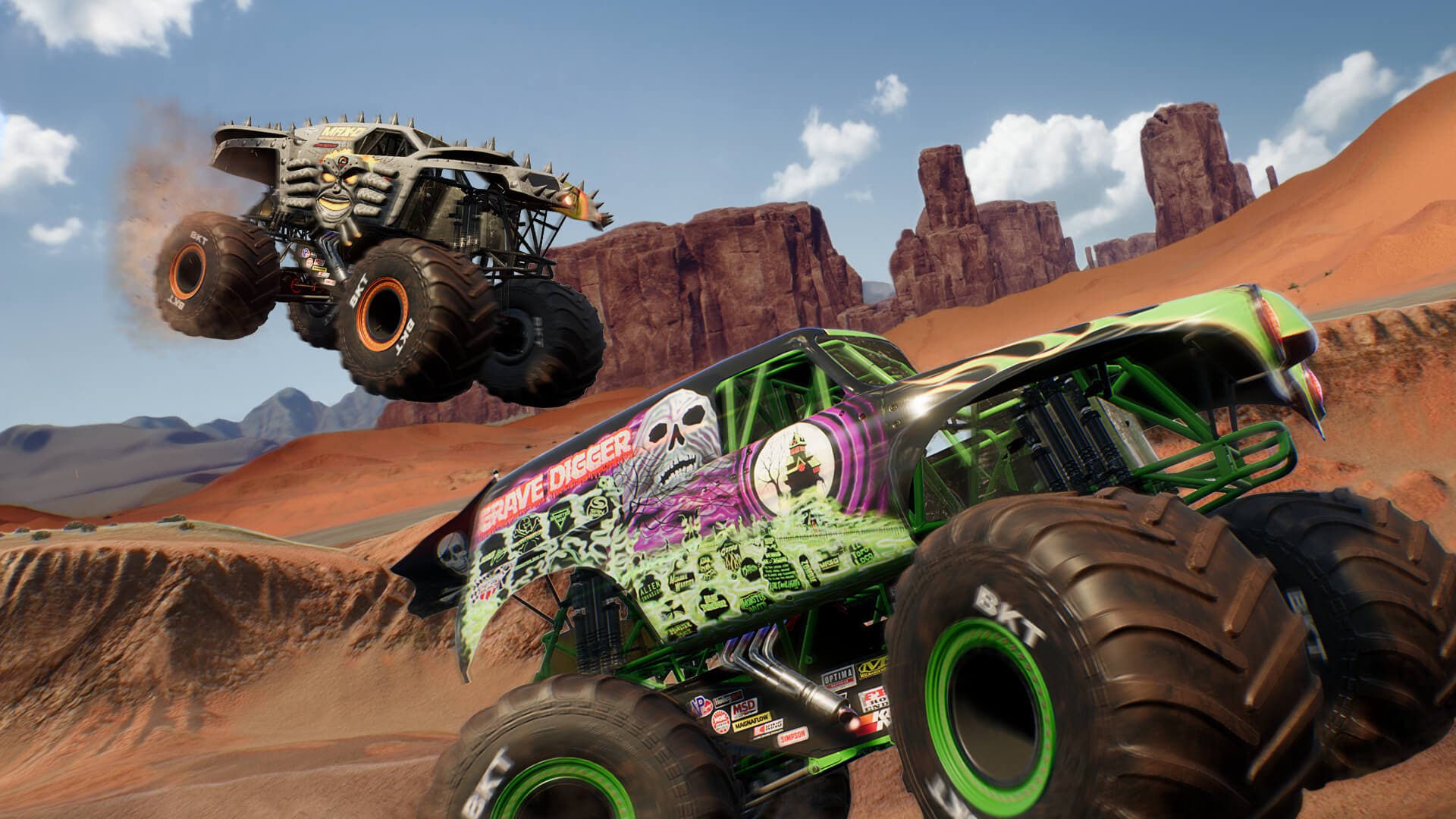 The moment I loaded Monster Jam: Steel Titans, I felt as if the developers were trying to reintroduce the Monster Jam concept to me. They plug you right into the Monster University mode and begin giving you tutorials on how to go about being a Monster Jam driver. It’s almost as if they knew I hadn’t played a Monster Truck game in over a decade, and I’ll say this, it was a nice return. 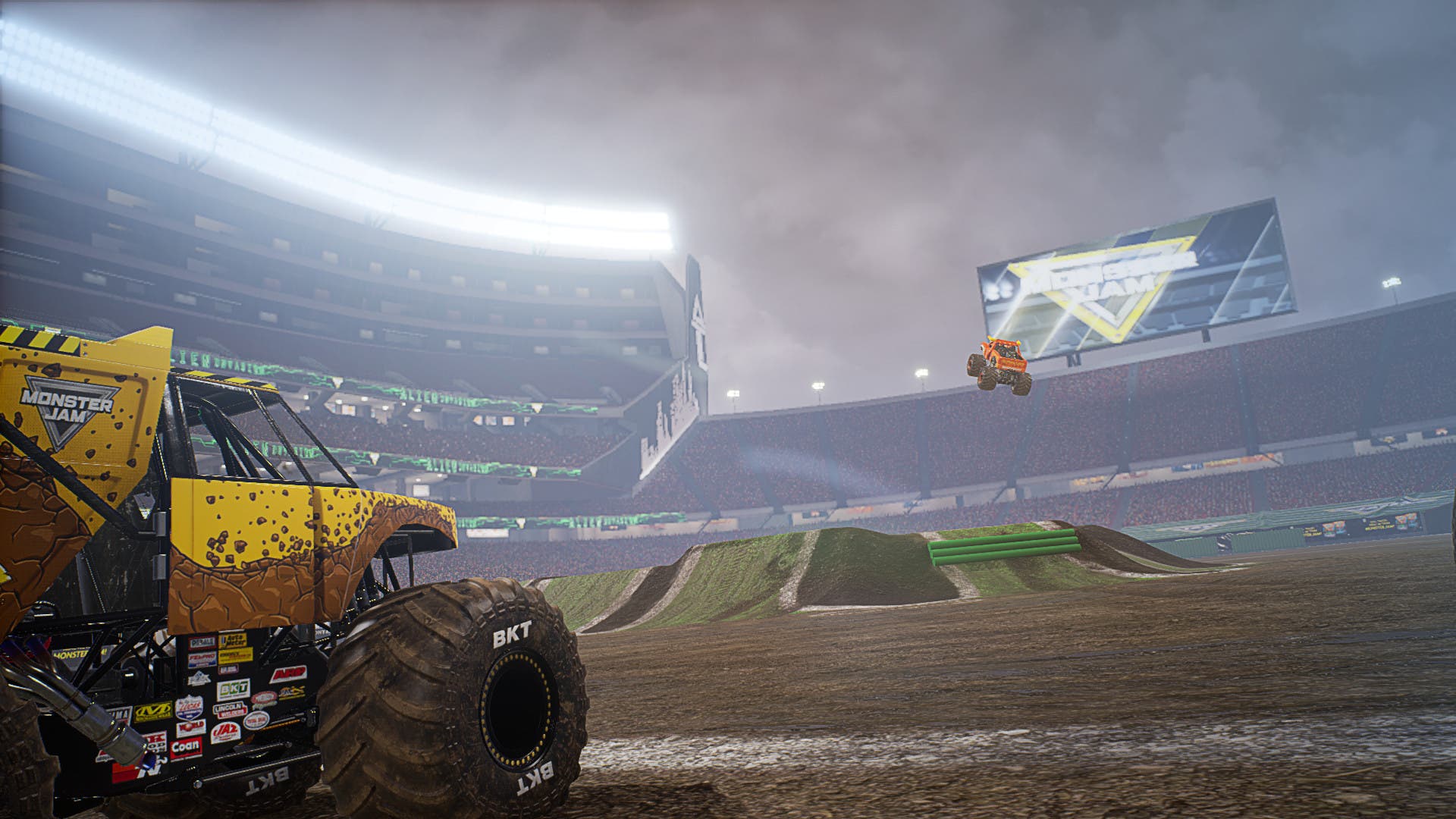 That isn’t to say Monster Jam games haven’t been out there. They’ve had releases here and there, I’ve never given them a second glance though. In my little slice of life, I usually see them get thrown into the bargain bins or their legacy being relegated to cashing in on the IP. In all honesty, I feel that Steel Titans will fall into the same category, but not without a fight! I’ll get out here and sum things up quickly, the game is quite fun to play, but it does have some significant shortcomings.

As I’ve mentioned earlier, they start you out in this University mode, which is a great way to introduce the player to how the physics will be handled. They give you a few challenges to complete, teaching you how things like donuts and wheelies are done. My first negative towards this game is, unfortunately in the physics department. The game feels like it’s trying to toe this line between simulation and arcade. Driving the trucks is enjoyable, but once you begin to steer, it often feels like you’re driving on ice. I understand they are going for slippery dirt, but something doesn’t feel right about it. It’s hard to describe, but as I’m going around turns, I don’t “feel” my truck biting into the ground. It may be an unfair comparison, but take any of the Forza Horizon games for example. There are plenty of times you’re off-road there. Even though I’m driving in the dirt, I still “feel” my tires against the ground. The vehicle is actively talking back to you, the driver, about what’s going on. It’s a sensation that many other racing aficionados genuinely understand. That feeling is absent in Steel Titans, and as a result, the trucks feel like they are gliding. 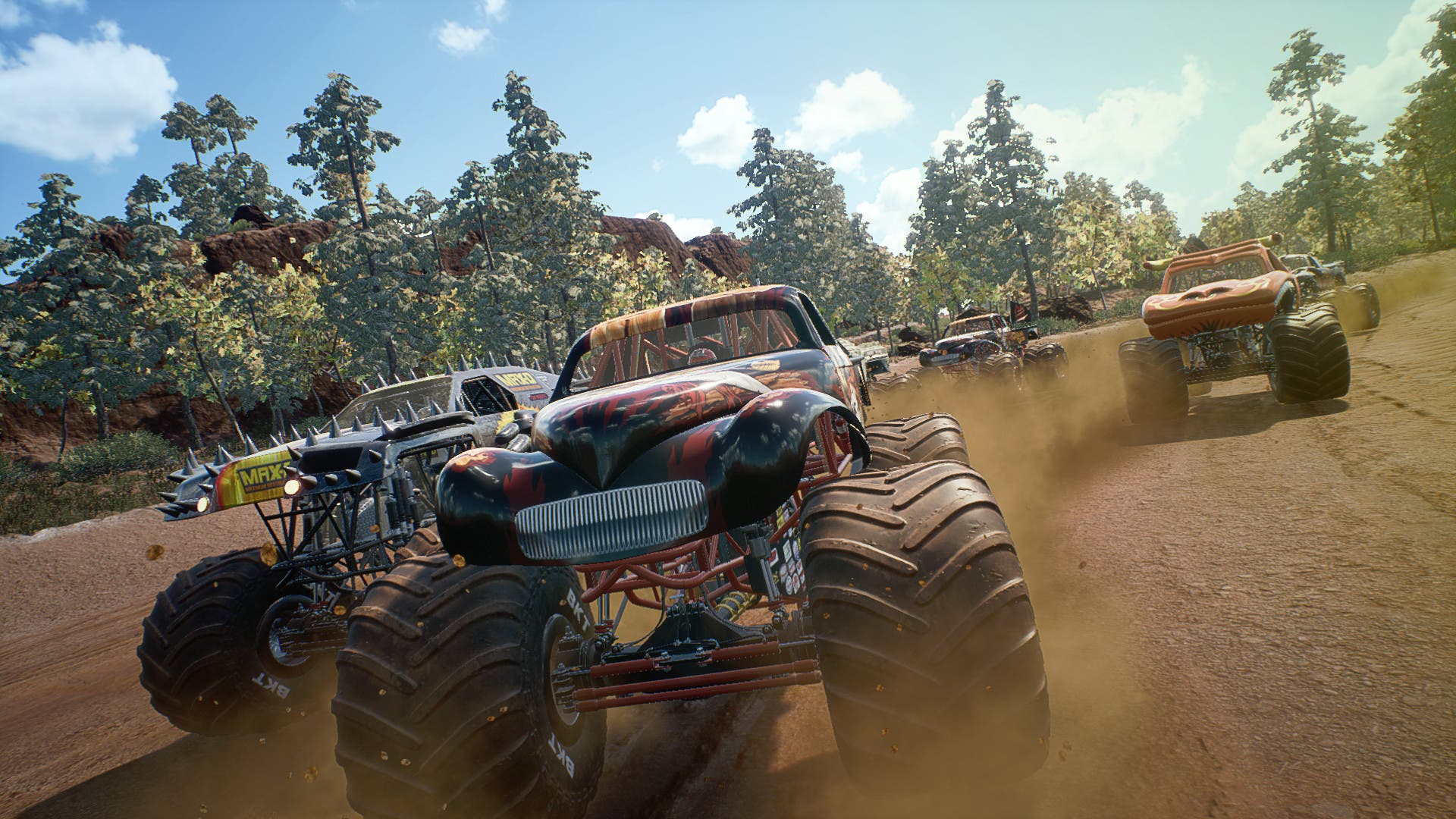 I will say that they’ve done a great job with giving your truck weight on jumps. You can feel the weight shift as your truck heads up a ramp and the force exerted when you land. I was able to make adjustments to driving over consecutive obstacles because I could tell how my truck wanted to react. It’s definitely something you want to be represented well in a game where you’re continually flying off jumps.

So back to the University for a bit, the University takes place in this open airfield looking place. But it’s not just that, it’s actually an open world for you to drive around in. You’ll have to progress through the game to unlock more of the map though. For the size of the trucks, the map felt a little small for my taste. It can get away with this since it’s mainly used as a hub more than anything else. You can explore and find collectible tokens but don’t expect missions or races to pop up. You do your career and single races through a menu.

I was excited the first time I loaded up career mode, I was getting the arena-style monster truck racing I enjoyed as a kid. The side by side drags, and chase events where the first two races to pop up and that tickled my fancy. Unfortunately, I was disappointed in the fact that they focused on multiple freestyle events. I’ve never enjoyed the Monster Jam Freestyle events in the real world, and Steel Titans isn’t doing it any favors. First off, they have two Freestyle events that are mostly the same thing. The only difference is that one requires you to be on two wheels at some point in your chain of tricks. Or at least I think that’s the way you’re supposed to do it? It’s never really made clear. It’s touched upon briefly in the University, but they don’t give you any real tips about what you need to do. It was a basic text prompt then do the challenge. At least they tried to give the Freestyle system a numerical score counter similar to something like Tony Hawk Pro Skater, as opposed to the real-life counterpart, that is done by judges. 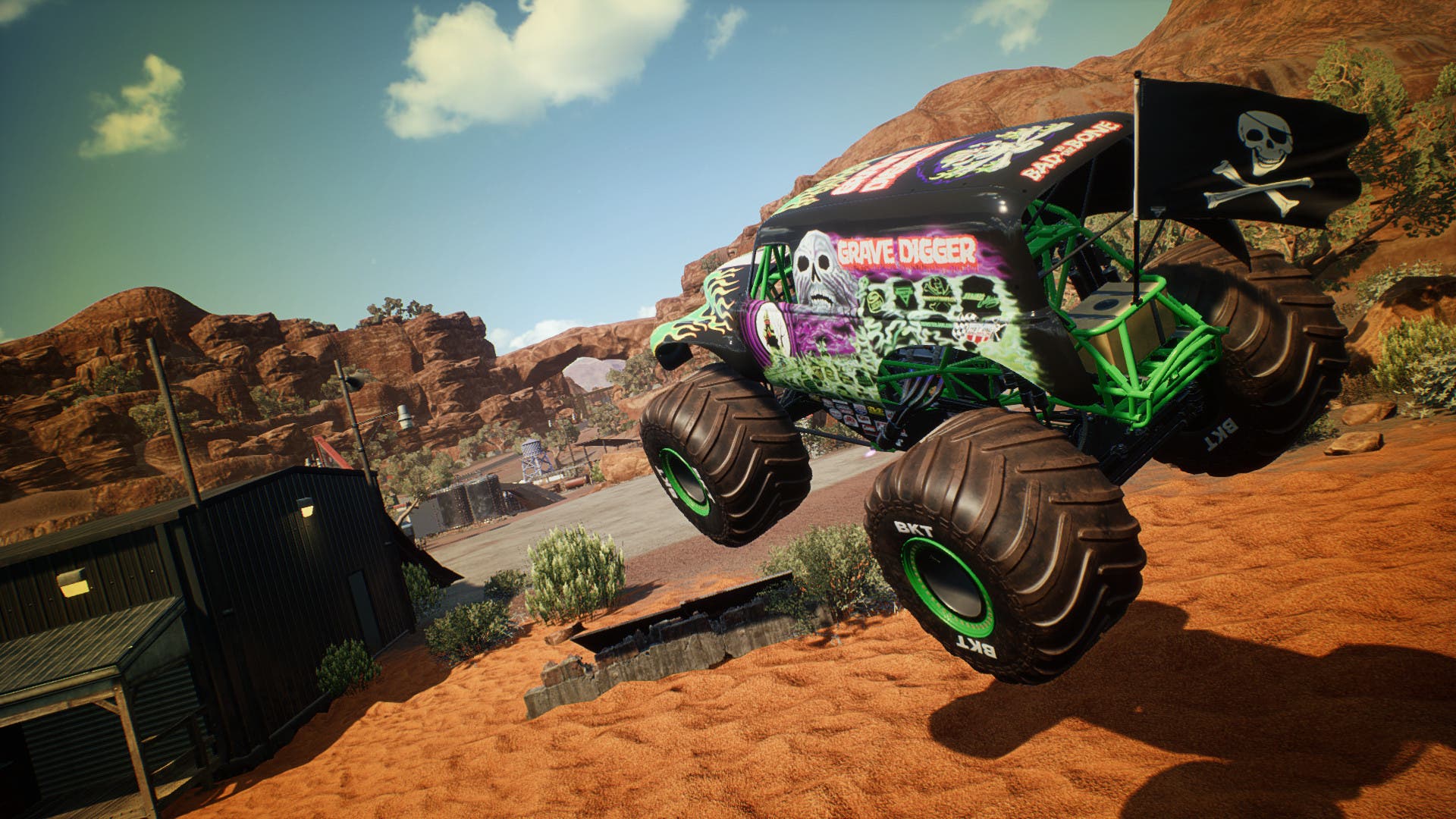 It’s one thing not to enjoy the Freestyle, but it’s a whole other thing when you’re dealing with weird physics. Any slight bump on either side of your truck’s tires and you could be flirting with flipping over. Yes, you can reset or do a donut to get your truck back up, but even that sometimes leads you to fall over again. It’s just not fun. There are other places to race than inside an arena though, there are a few races out in the open world area that feel more like a giant motocross course or some backwoods road race. Those times you’re required to drive down tight roads though bring me back to the frustration of the truck being so sensitive to tiny bumps. Your trucks do get slightly easier to drive thanks to an upgrade system in the game. Each truck is treated as it’s own character and you can earn money completing races, to be used towards upgrade tick marks. Upgrades to increase things like top speed and handling.

So moving on, the game looks nice on PC. The plethora of licensed trucks are beautifully rendered. Some trucks even have multiple paint schemes to choose from, but it seems they’ve decided to pad out their roster by making each different variant a separate truck to work with. Some make sense like the different dog variants for Monster Mutt, but some are just repaints, and they didn’t need to be their own truck. The same level of detail didn’t go into the environments, though. A lot of the environmental elements feel outdated, bland, blocky, etc… Granted most of the time you’re driving by at full speed so you won’t notice, but take a moment to breathe in the scenery and, well yeah, not great. 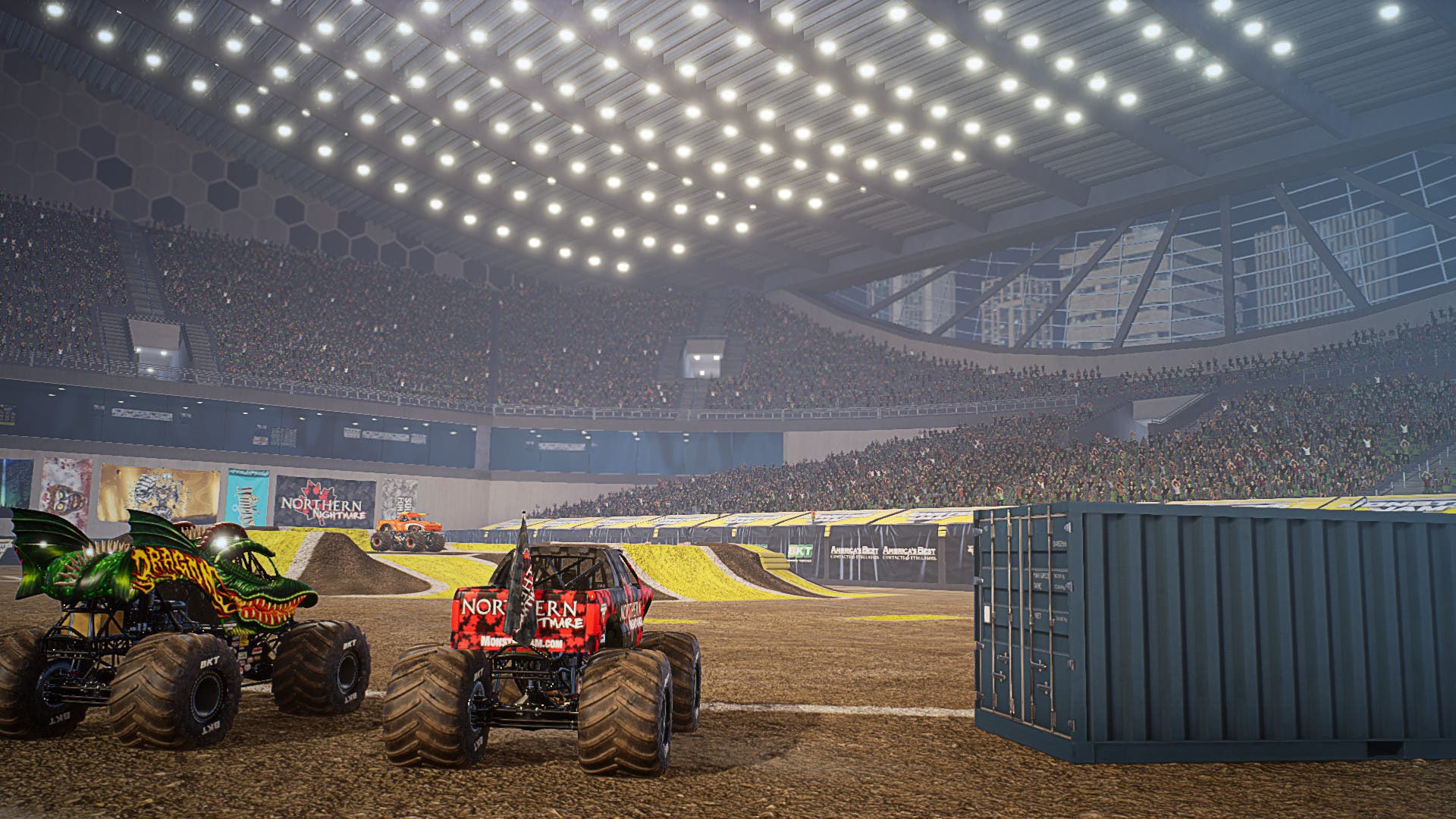 For a fan of the series, this isn’t a terrible title to pick up. In fact, it seems to be the best of the bunch. But I wouldn’t recommend this game to anyone else, they just wouldn’t enjoy how the trucks control. Whether casual or really into racing, it’s not a title I’d pitch to them. But if you like big trucks and big air, hop on in.