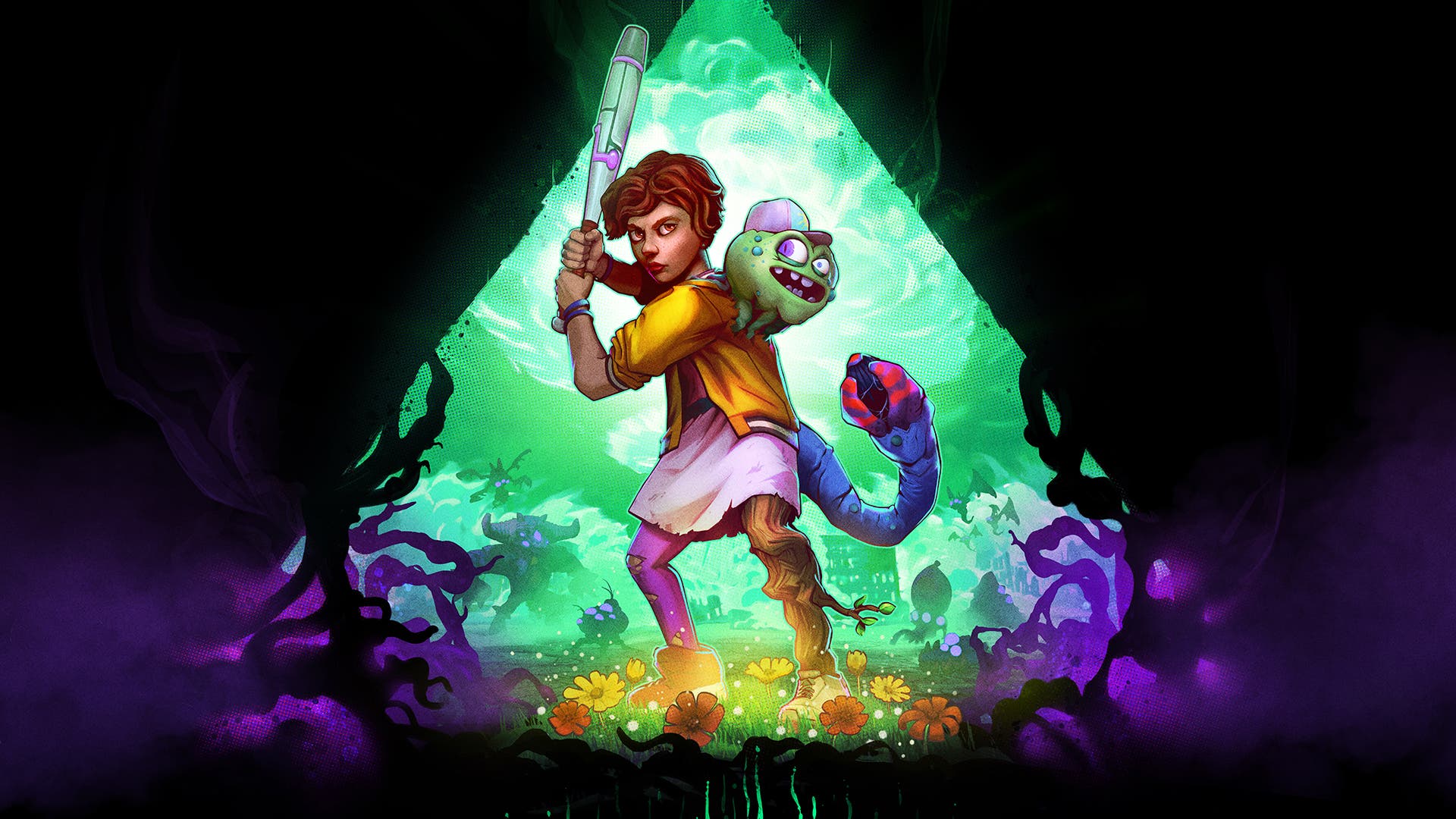 Double Fine Productions offers their take on the roguelike genre, and does so in a post-apocalyptic, neo-80s way with RAD. As someone born in the 80s and loves that particular decade, this game hits all the right notes. As a game though, especially a roguelike where every death is permanent, it falls short of greatness. It’s enjoyable enough, but lacks range much like its melee-focused combat. RAD doesn’t do anything egregious with any one thing, but it doesn’t do anything ostentatious outside of its stylistic choices to standout within the genre. 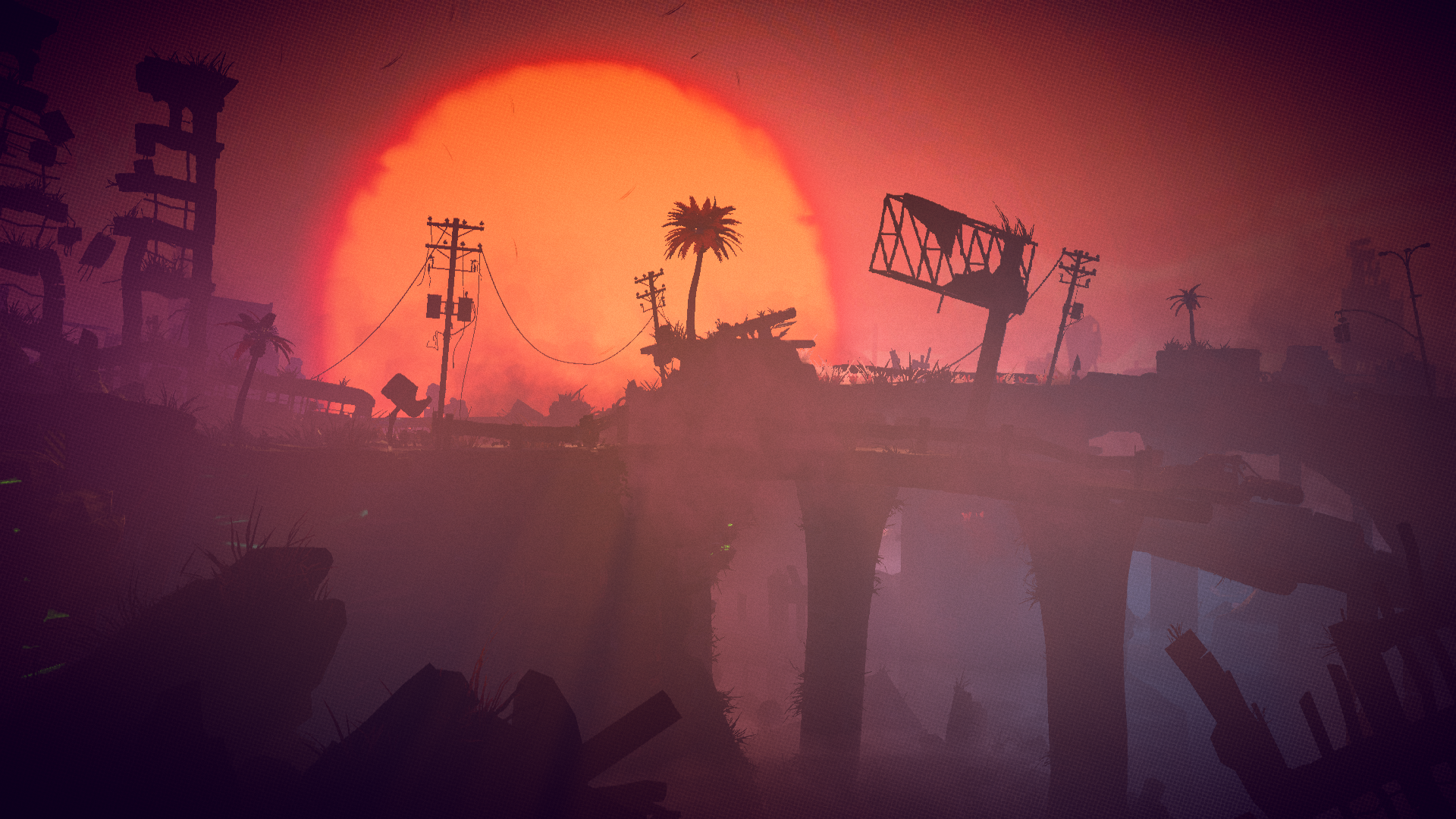 You know things are bad when there’s been not one, but two apocalypses that make the Earth look like a twice-baked potato. As a result, the world has been permanently etched into the 1980s. People of old have failed the earth twice now, and it’s up to the younger generation of teenagers (with or without attitude) to take up the mantle. With a keytar in-hand, a cyberpunkian wizard makes you remade by the menders which allows you to survive the wastes. With a magical hierarchical bat in-hand, you set out to right the wrongs.

Whether selecting new run, continue run, or daily challenge, you’ll choose one of eight playable characters (half of which are locked). The characters themselves aren’t different from one another, it’s all a matter of preference on how you want to look. There’s a couple that eschew their look from Steve and Eleven of “Stranger Things”. Then there’s otherwise some very 1980s archetypes with a punk, gamer, and more. Once selected, it’s time to get into the thick of combat. 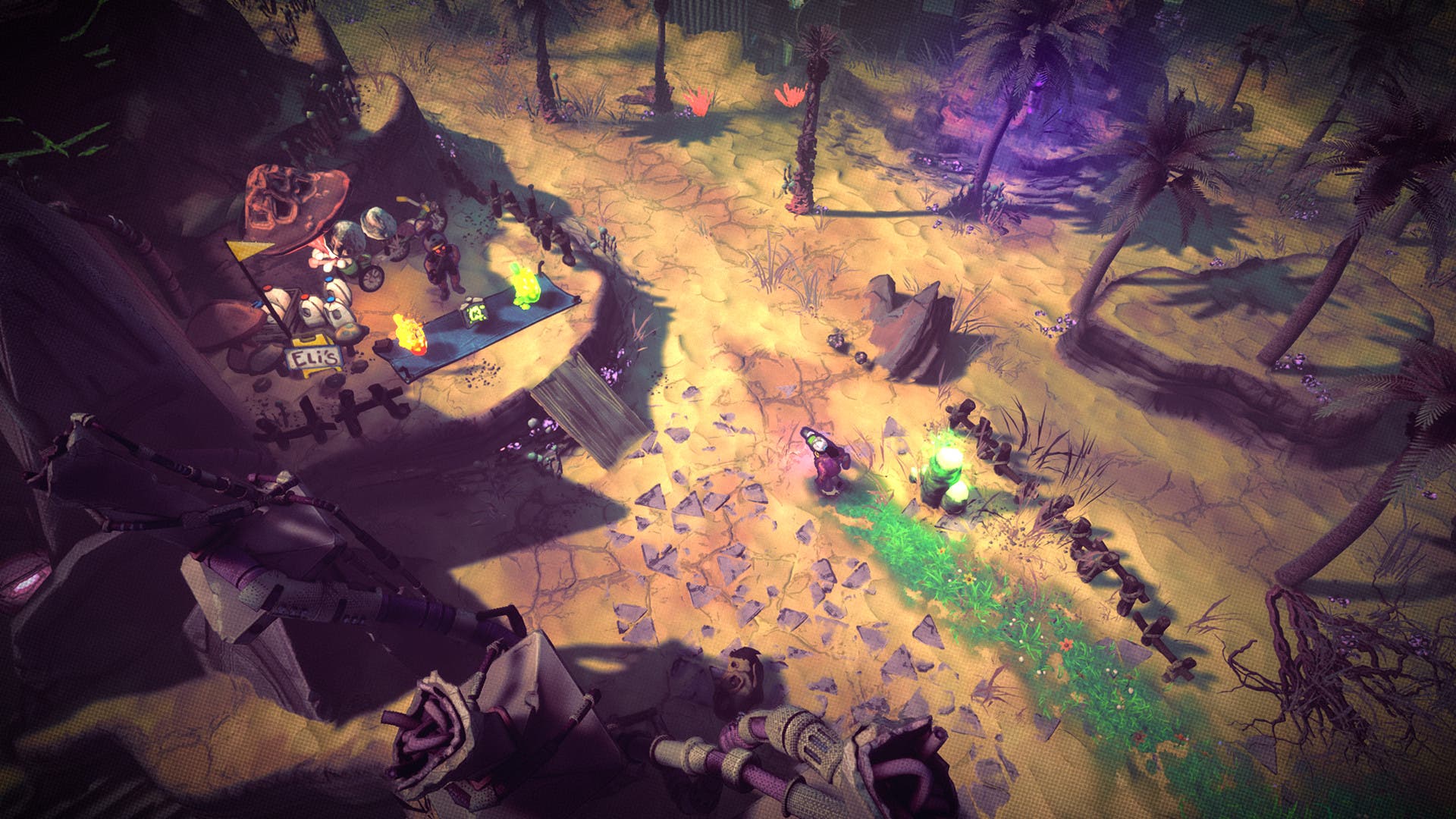 I’m immediately reminded of Nuclear Throne in theme, followed by Torchlight with its melee focused combat. While RAD is slow to start as all roguelikes can be, it’s especially difficult as most of the first enemies have a ranged element or distance closing abilities. It’d make the early goings so much more enjoyable if you had some sort of ranged attack, just something to throw. The game often feels luck-based, but in time leads to being skill-based. Repeated runs reinforce your growth and upgrades. The charged attack leads into a whirlwind attack, jumping and attacking transitions you into a jump kick which is by far my favorite move. Combat is fast, fluid, and most of all, manageable. The further you get, the more hectic it gets.

Since the game takes place in openly explorable areas unlike a grid-based system, RAD is generous to have a map to reference, which is revealed like a fog of war. There’s three distinct zones to explore: The Cracked Lands, The Hollow Forest, and The Devoured Expanse. Each world has two levels in each of them, which aside from the difficulty feels rather short. In order to move on, the player is literally gated by needing to activate two totems in the first stage, and three totems in the second. This does one of many things, but mainly forces the player to fight, explore, and mutate to be strong enough for the boss fight behind the door that opens upon activating the totems. In your post-apocalyptic journey for survival and cleansing, you’ll find shop keepers to buy items and mutations, discover secrets, and explore dungeons for more of the aforementioned elements.

Being remade, you have the innate ability to absorb radiation from fallen foes as means to gain experience. Upon reaching the end of the experience bar, you’ll gain a mutation. Over time, you start looking like an action figure with limbs and heads that have been swapped with other toys in the box. Mutations can stack and buff if you come across repeated ones. RAD categorizes mutation abilities between Exo’s (actives) and Endo’s (passives). You can acquire negative mutations like making you unapproachable, or only seeing oranges and reds. Later levels of the game will have you taking on bummers, which essentially nullify the cool abilities you’ve acquired. There’s an item you can buy to reverse it.

The look and feel of the game is decidedly 80s, but also has the appearance of a living comic book. The environmental design is bright and glows like neon. Enemies are mutated from their original form with horrid appearance all their own. Audio does a great job, with the audio reverberating near canyons, and synthwave style music filling in the ambiance. If there’s anything RAD gets right more than anything else, is the sound and visuals. 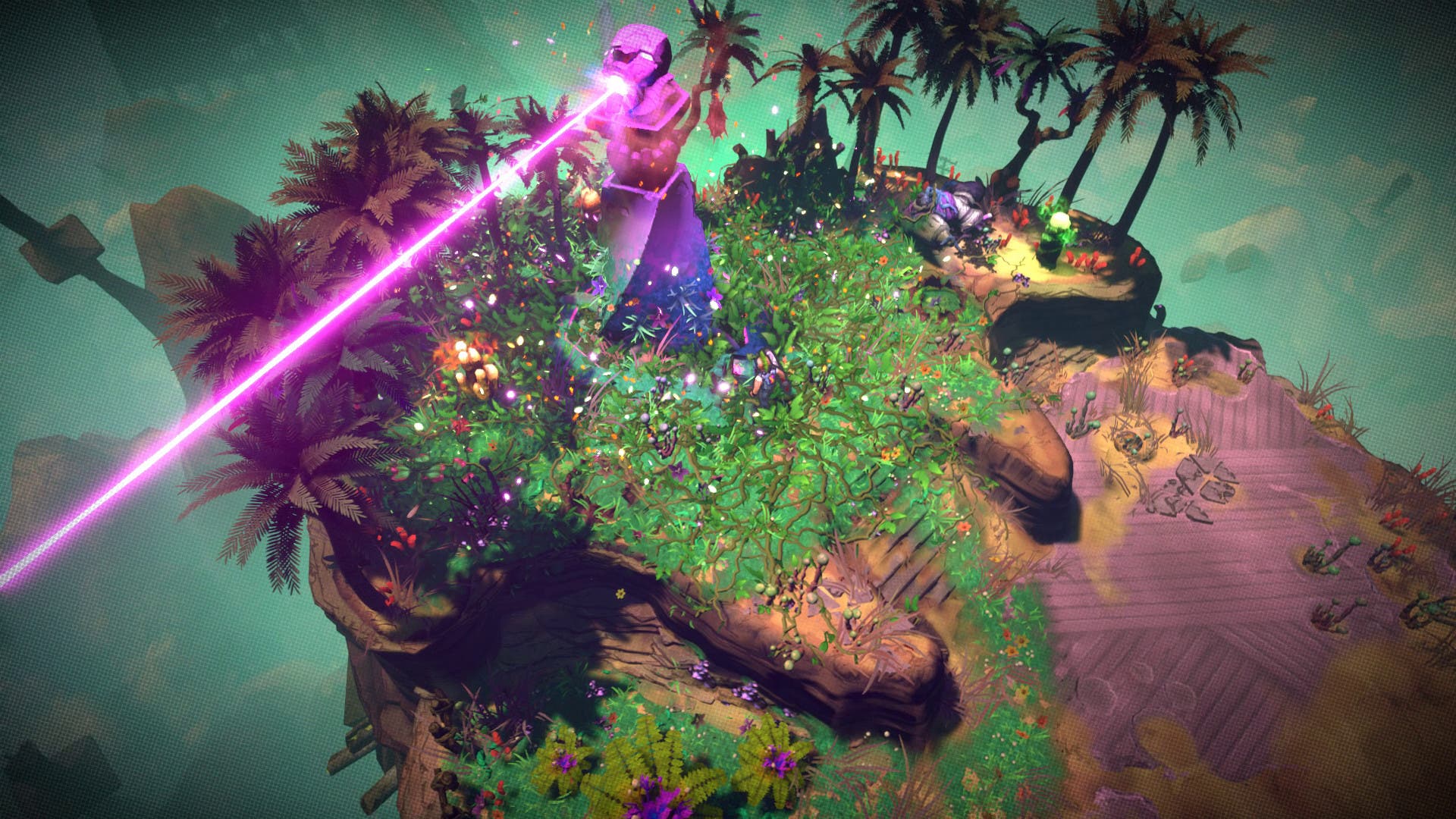 In each run you’ll pickup currency in the form of cassette tapes. These can be used at shops to purchase in-game items. While rarer, floppy disks will drop which serve as keys that open chests, hatches, and secret doorways. Why either of these items are the world’s currency and keys is anyone’s guess, but it fits in the game well. Artifacts are another kind of item you equip, such as the puzzle cube which reveals secrets on the minimap. There’s so many more to find. Talk to anyone in the hub area, and you’ll learn that if you bring back specific items, they can start to unlock improvements, and more.

The game features shortcut areas, which are essentially level skips. Find them, and you can fast-track yourself to the next level without activating the requisite totems. Traversal in RAD is really good, with lots of options for getting around quicker. As you walk, you lay down a lush colorful trail behind you which is two-fold: it allows you to see where you’ve been (also visible on the minimap), and it retreading or backtracking has you moving faster on it. It’s touches like this that are a quality of life improvement. Traversal in later levels has you using jump pads and frequent teleporters as the maps are bigger. One feature I’m glad the game has is ‘Save and Exit’, so you don’t have to do a run in a single sitting.

Bosses end-cap each level, and killing them earns you a heart mitosis mutation, which splits your heart into a third chunk so you can take more damage. After leaving the boss room, you’re given the option to back to town with a left portal, or to the next level with the right. Even in death, there’s progression in RAD, it gives you details like how long you lasted, what you were killed by, and what you unlocked. In most cases, this external experience meter unlocks loot for shops, new bats, and so on.

I was dismayed to learn that upon beating the final boss, I had only unlocked 1 of 9 endings. I’ll leave the details out, but the “Power Chord” ending seemed to be one of the worst ones to get. So I’m interested to see more endings, but it’s a bit of a bummer you didn’t beat all of it. Once you’re done, you start completely fresh to do it all again.Thankfully after the ending, you unlock styles for characters that give them a different look, quirks that modify the starting health by replacing one of them with a fire shield, things like that. This is a game about having long-tail progression, for both the town and the player by playing it through again and again to see it all.

RAD is stylish, quirky, and above all else, a Double Fine game. What that means, is that it’s really enjoyable, funny, but not without its rough edges. It’s a game where you literally have to adapt and overcome. The game is either too punishing early on or too short that makes either end of the experience feel shallow. RAD is “another one of those” with a cool aesthetic, a great soundtrack, and has enough going on to keep you coming back after each unceremonious death.