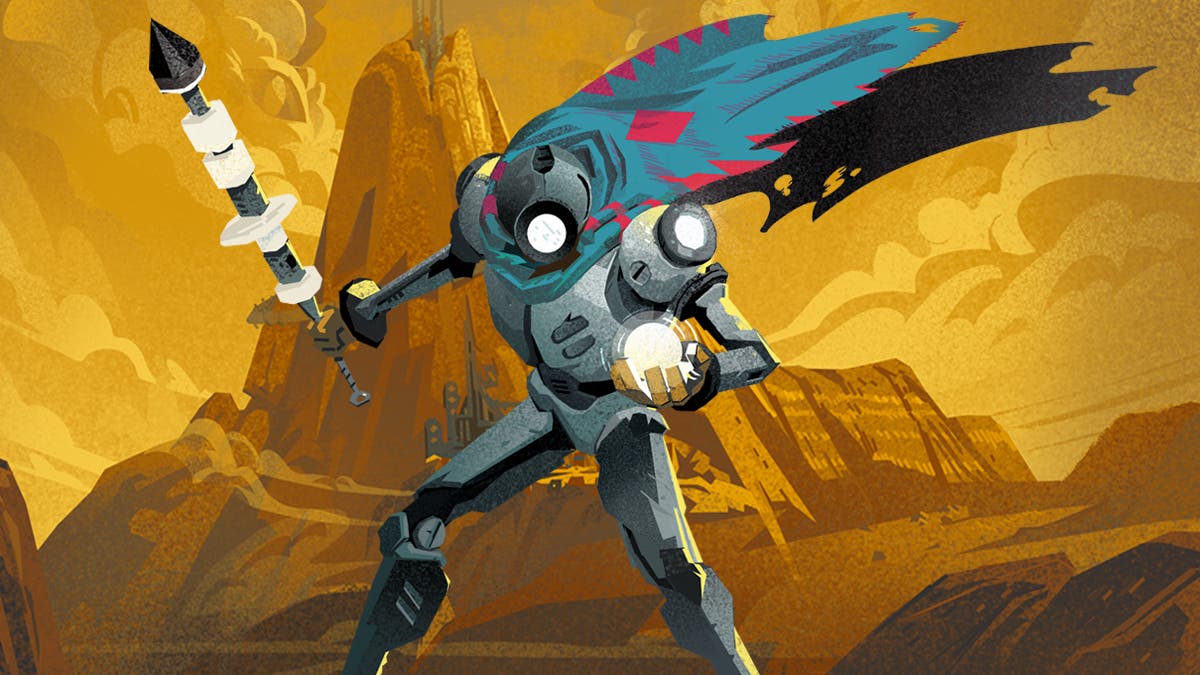 Creature in the Well Review

Many games claim to bring new, innovative mechanics to their chosen genre, but most of the time it simply amounts to minor deviations from the well-trodden path. Creature in the Well seeks to push things further than these typically “safe” experiments, mashing up two distinct genres in a way that feels much more unique. The experience can be rocky at times, but the further in you get, the concept hits significantly more often than it misses. Combined with some truly great art, good music, and a mysterious & engaging story, Creature in the Well will take you on what is a mostly fun ride. 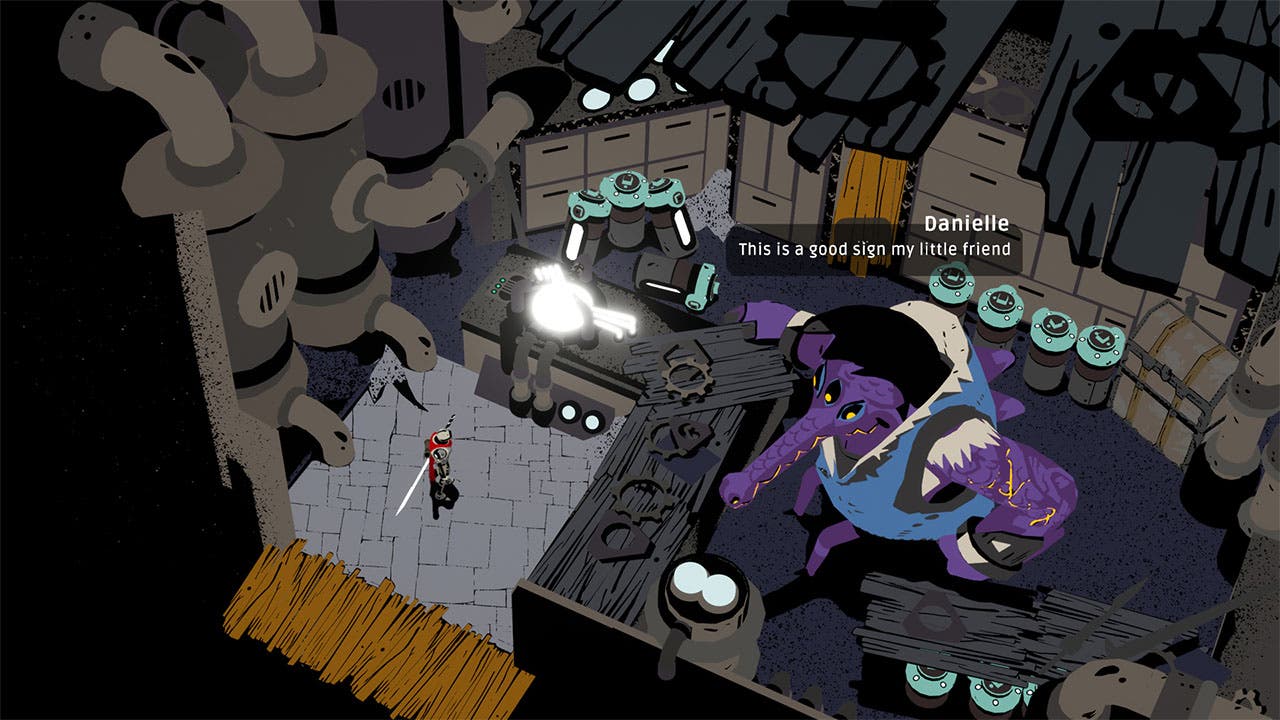 Creature in the Well brings an interesting new twist to the typical dungeon-crawler experience, substituting your standard hack-and-slash mechanics for a surprising mashup of a twin-stick shooting and pinball. Rather than directly attacking enemies or interacting with the environment, in most cases you’re batting energy balls around rooms to hit bumpers until they charge up your reserves and recede into the ground and disabling turrets from shooting lethal projectiles at you.

As BOT-C, the last of a slough of engineering robots, you reactivate on the outskirts of a small town in the middle of a desert, besieged by a violent sandstorm that has trapped the residents in place for generations. Why exactly you have suddenly come back online is a mystery, but it’s quickly overshadowed by larger ones like the quiet, introverted mountain town, the large and dormant machine inside said mountain which with you are tasked to bring back to life, and the mountain’s primary occupant, the titular Creature. 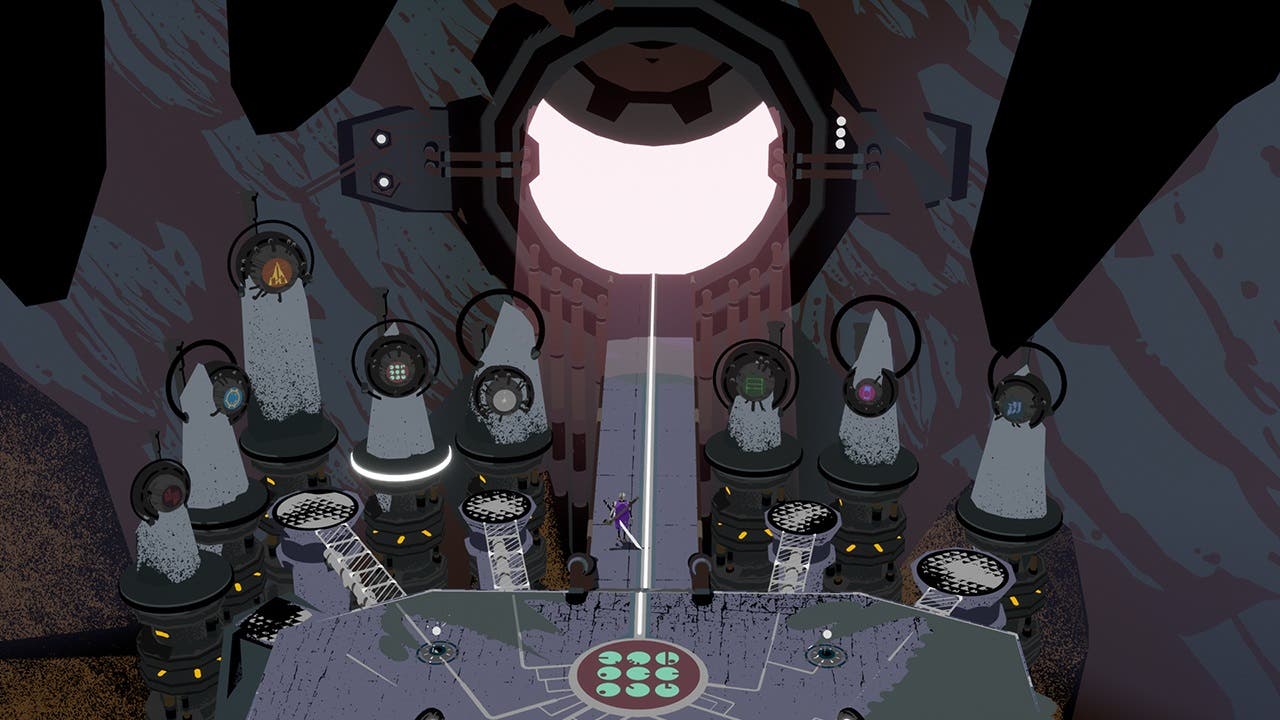 The normal staples of a good dungeon crawler are all here; a town that needs saving, an overworld leading to multiple dungeons, each of which contains a series of rooms to navigate with some optional secrets and at least one new gear pickup hidden somewhere inside, and a plucky hero thrust into action by forces greater than them self.

Your primary means of interacting with the machine and its dungeons is batting energy balls around, which are helpfully teed up for you in each room. You can use your charge weapon to help them stay active longer (more bounces!) and your striking weapon to aim and send them off on their way. You send balls into bumpers to gather energy and deplete their charges until they recede, so that you can use that energy to open the gate to the next room. Some rooms feature turrets or damaging energy beams that need to be disabled, others feature puzzles that require a combination of precise aim and tight timing to clear. The action is varied from room to room such that there is a rhythm to the ups and downs of each area. 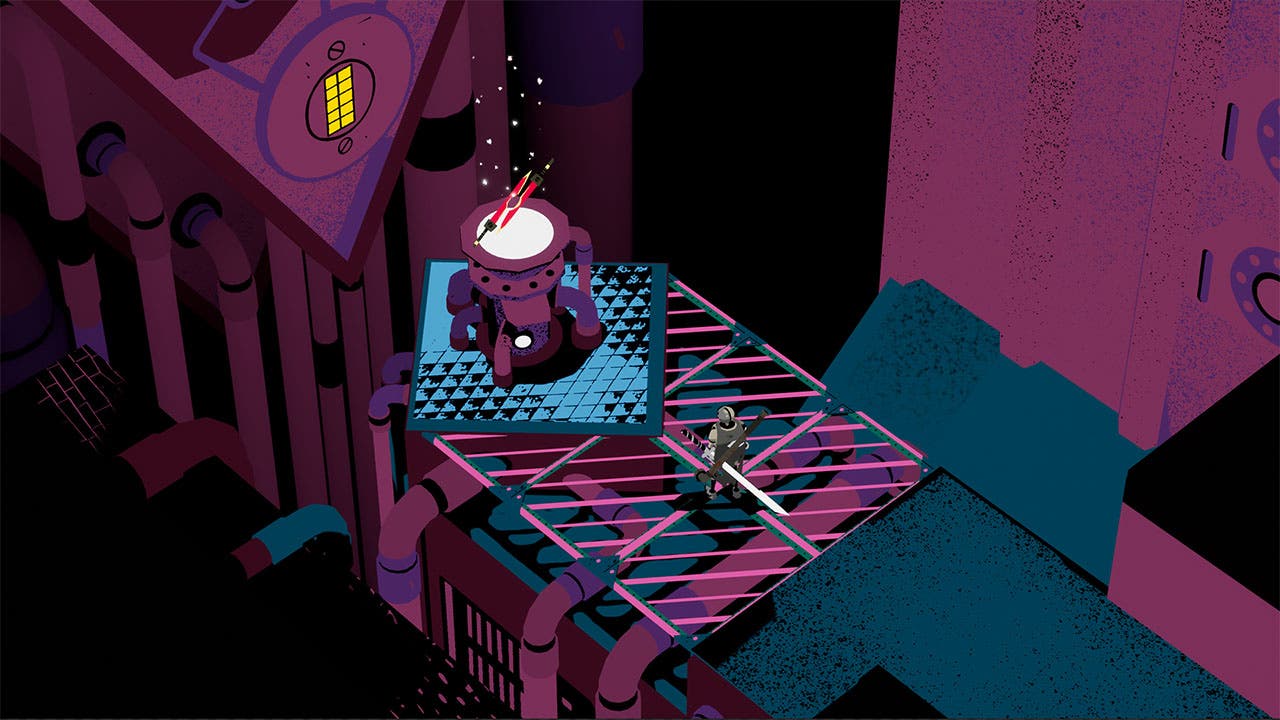 In the beginning, the challenges brought on by each room are nominal, designed to ease you into getting familiar with the mechanics and controls. The mechanics of charging and striking are easy enough to grasp, but getting the aim dialed in where you want it can be fickle, particularly on a controller. There is a lot of trial and error involved in the early game, but thankfully the starting dungeons are relatively forgiving in their demands of your skill. As you get deeper in, finding new weapons is essential to success, though, as some of them unlock helpful aiming abilities like slowing time down to a crawl or painting a giant red “laser” that shows you exactly where your ball will go.

The acquisition of these abilities honestly is a transformative point in the game, and I think the point at which Creature in the Well transitions from being a shaky exploration into a better-realized concept that plays as well as it looks. Admittedly, there is an on-screen indicator of where you’re aiming prior to discovering these fancier weapons, but I actually didn’t even notice it during the first hour or two as it floats next to your character, as more often than not my eyes were focused on my target. 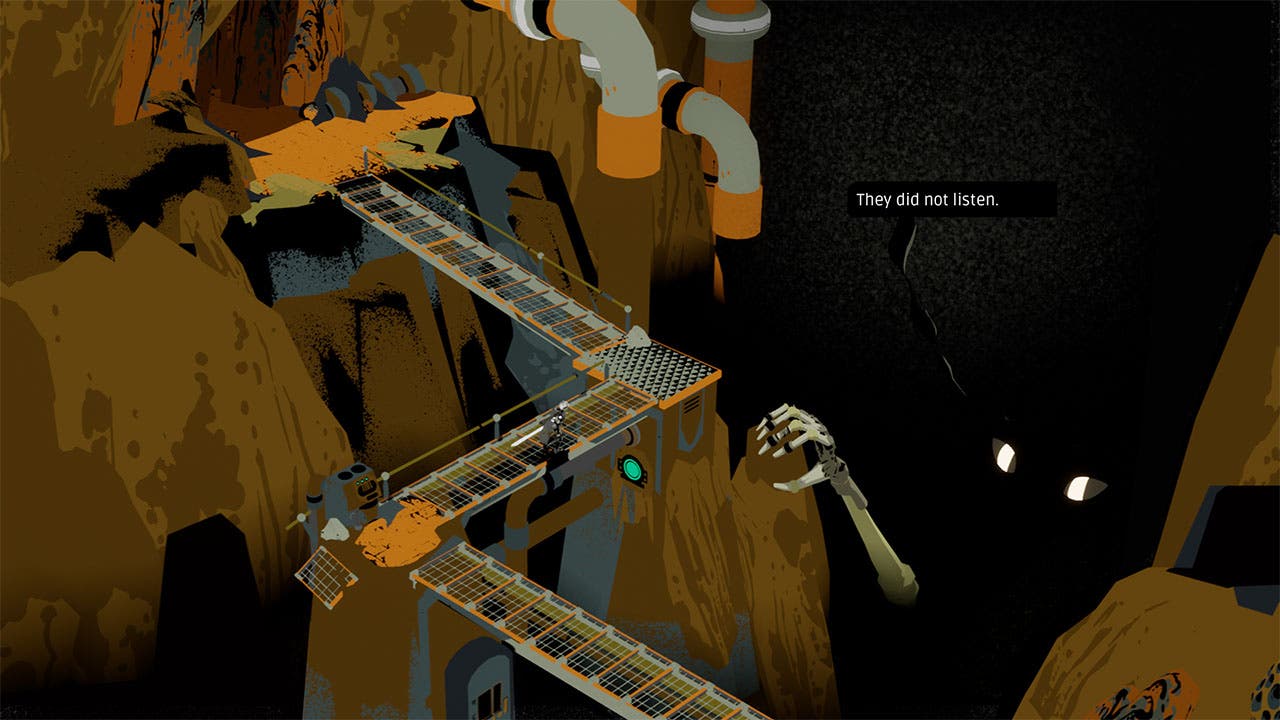 What really helps pull Creature in the Well together are all of the things going on outside of the gameplay loop; the art, the music, the lore, and all of the nice little touches that add character to the world and its sparse inhabitants.

The illustrative qualities of the visuals recall the aesthetics of famous national parks posters that mix rich, flat-shaded colors with carefully placed textural accents. The soundtrack makes heavy use of low, moody electronic melodies and dissonant notes that set a tone of loneliness, mystery, and danger as you work your way through the mountain’s chambers. Both of these elements pair well with the small touches scattered throughout the game’s levels to build a proper sense of place and give purpose to your quest. 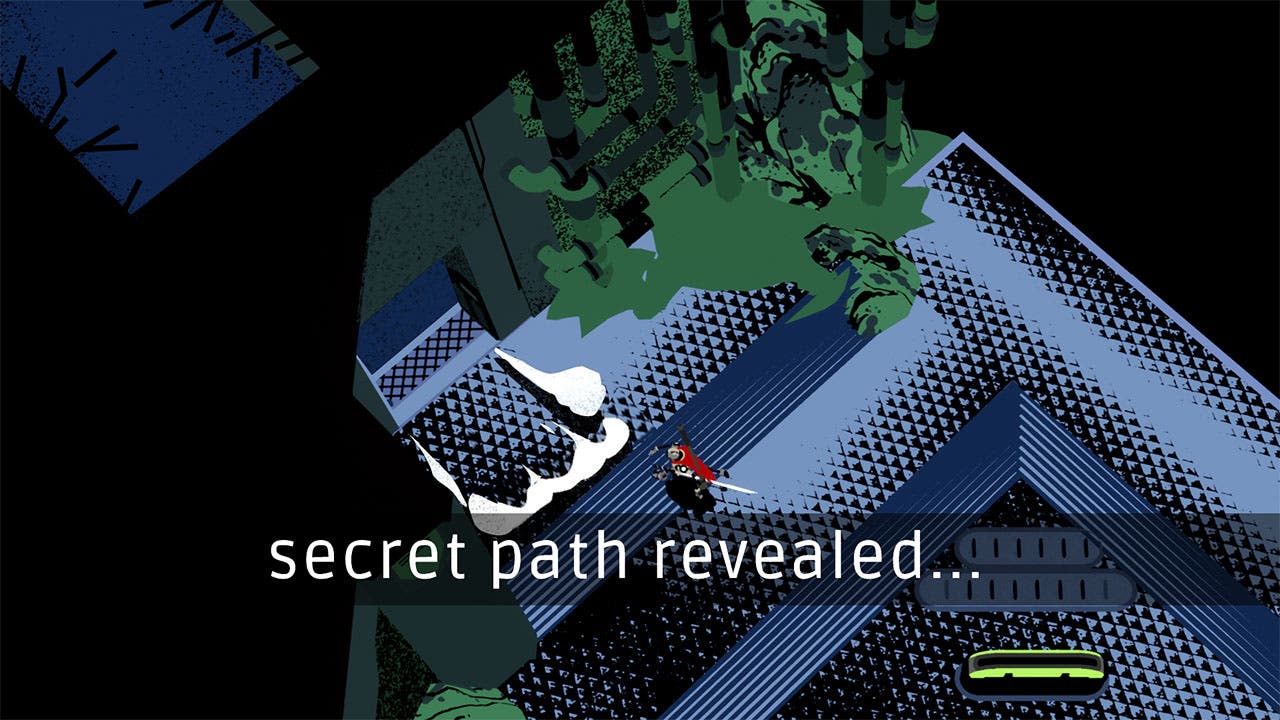 Adding to all of this are your regular run-ins with The Creature itself. It makes itself known to you almost immediately, making sure you know that you’re unwelcome in its home. More often than not, you’ll spot it lurking in the shadows, its big bright eyes peering out at you as you thwack your way from room to room. As you progress, its taunting becomes progressively less playful and more openly hostile as it senses that you pose an actual threat. No matter where you go, you always have the sense that it’s watching you, and could take you out at any moment if it really wanted.

Any game can make good use of these elements individually, or even in parallel. Creature in the Well does the extra work to ensure each of them feels considered as part of a system, which ensures they work together to transport you into the game world and make you feel like an active participant instead of a passive observer. I personally found myself not just absorbed by the world, but actively invested in its rejuvenation. 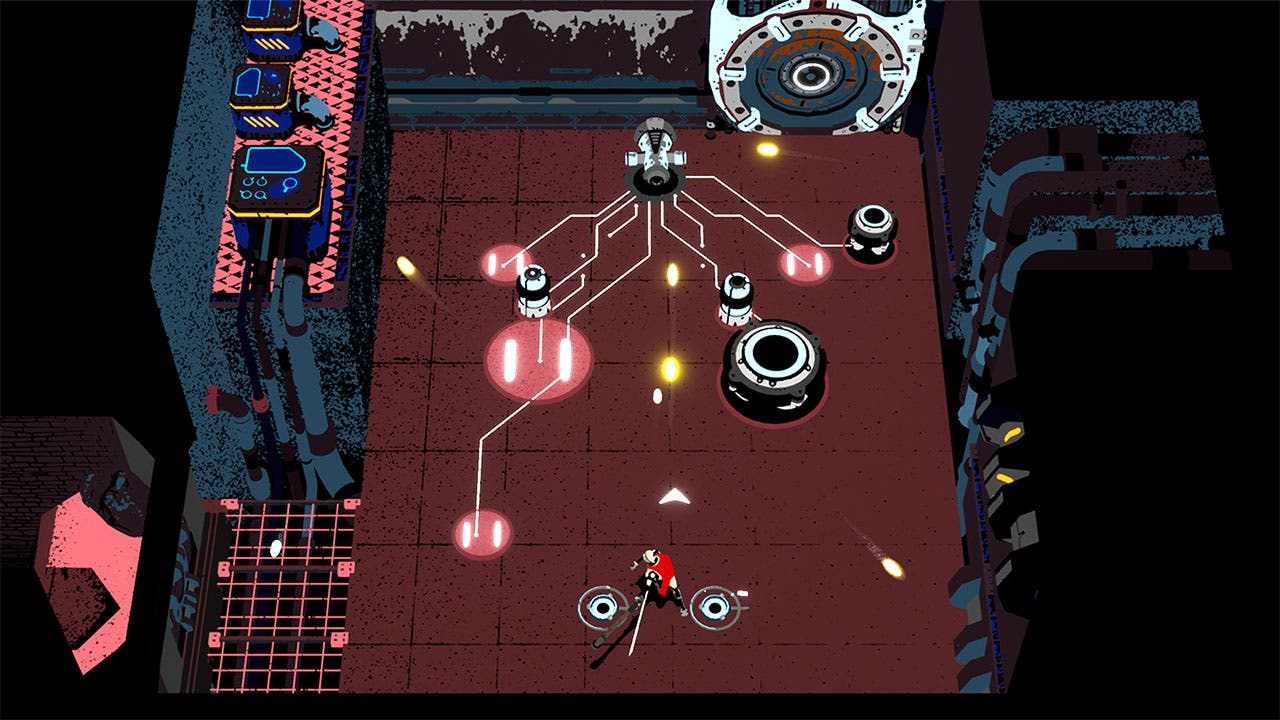 Creature in the Well’s genre-blending experiment is conducted within a well-worn framework, so that the risky parts are contained, which is part of what empowers it to be successful more often than not. It falters from time to time, and there are moments where the pinball conceit makes some of the challenges more difficult than they really ought to be, but for the majority of the experience everything works well and feels good, which is more than enough reason to take the plunge.