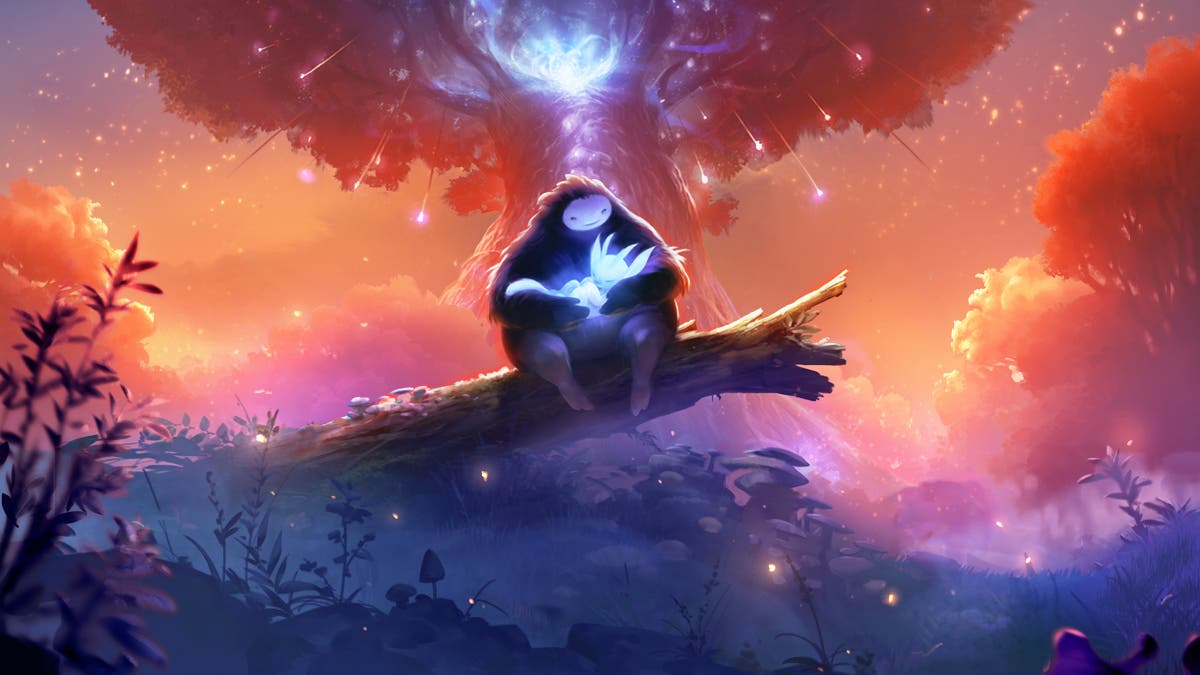 There are games that strive to be art; to push the boundaries of the medium and experiment with how it can be used to tell stories and present its concepts. There are games which are artful in their execution, leaning into the existing strengths of the medium and using traditional constraints as reasons to execute masterfully and create something that defines and shapes the gaming experience. Ori and the Blind Forest is without a doubt an artful game, adding volumes to existing formulae in service of creating a game which is gorgeous to behold, a joy to discover, genre-defining in execution and utterly indelible on the memories of those who are lucky enough to play it. 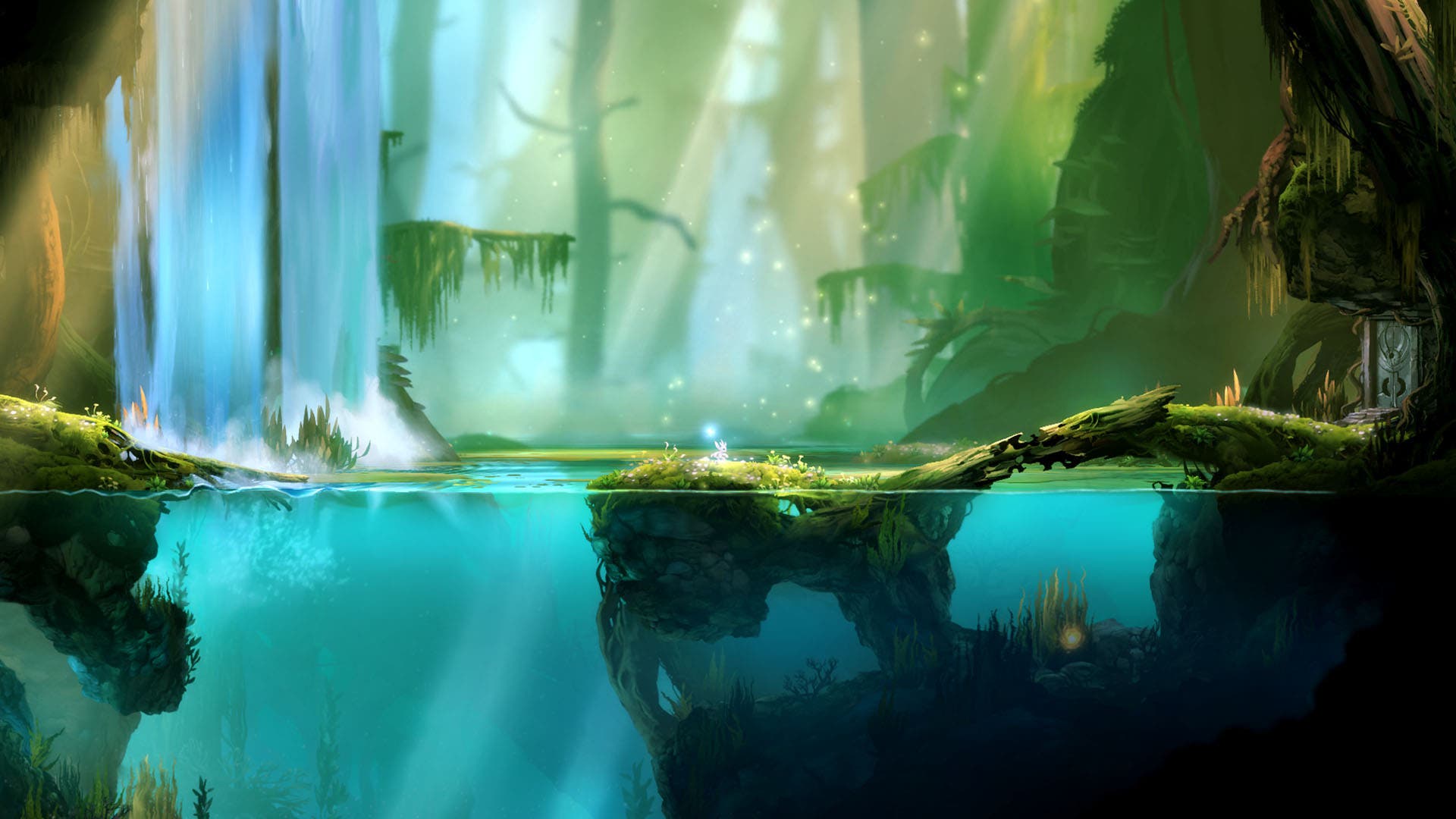 Ori is a tale set in a mythical forest inhabited by strange, impossible creatures and vegetation, beautifully rendered in an illustrative style that hearkens back to a golden age of animation, but truthfully with drastically more detail than the hand-drawn feature-films you’d ordinarily think of; instead, the world is more like a picture book come to life, with wonderful lighting effects and fluid movement. It is truly a beauty to behold.

You play as the titular Ori, a small white creature with a deep connection to the guardian spirit of the forest, and thus it is your task to restore the forest to its former health and glory from the corruption and rot which have overtaken it.

Ori is an exciting, contemporary take on the classic Metroidvania style of game, opting for lush open environments and more organically designed maps than the traditional grid-based system of rooms and corridors. It is less concerned with the extreme backtracking and nook-and-cranny exploration of traditional games in the genre than it is with providing an immersive experience as you explore, progress, and learn more about the world. That’s not to say those elements aren’t present, but they feel less central to the overall experience. 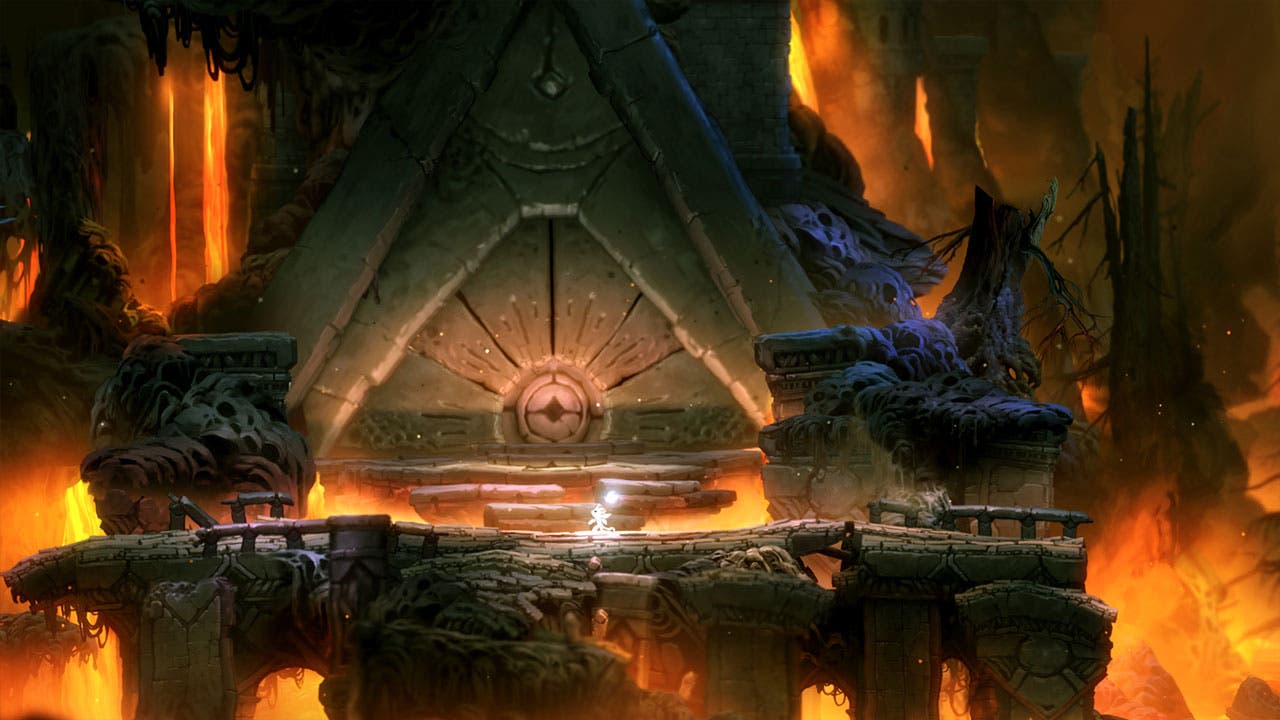 Instead, the game is constantly teaching you new things about your abilities, the forest itself, and the ways in which you can interact with it. There are new elements being introduced to all of these at a regular clip as you work through the game, creating a steady drip of progress that keeps you from ever feeling as though you’ve stalled out.

Ori moves through the world with speed and grace, with fluid movements that feel natural and responsive to control. This is a genre which is already largely dependent on character movement to provide the player with a sense of power and control, and Ori and the Blind Forest takes this to the next level by granting you with a large variety of movement abilities to ensure that you are seldom in a situation you can’t easily navigate. In the game’s opening hours, you quickly advance from basic running and jumping to wall jumps, double jumps, air dashes, to name a few, such that you’re flitting around the environment with ease, which is fitting for a character who has spent their entire life in the forest.

The forest is beautifully presented in rich, vibrant hues and detailed environments that feel real enough to reach out and touch. Ori traverses large tree systems and navigates dark, dripping caves, soars through canopy and leaps across chasms. The experience feels vast and exhilarating, operating on a diminutive scale that enhances the spectacle of the world you’re saving.

Of course, this is a game in the vein of Metroid, and as such there are abilities to unlock, collectibles to collect, and bosses to fight. Ori and the Blind Forest does a great job of adapting these familiar genre tropes into shapes that fit neatly within its interpretation, so that they work in harmony together. Collectibles aren’t necessarily “easier” to get but they’re more naturally scattered along your path. New abilities are given out in specific places, but the addition of an ability points system allows you to customize how you want to play the game, allowing you to choose whether you want to rely more on offense, support abilities, or movement enhancements to face the challenges ahead of you.

The addition of a save-anywhere mechanic is a hugely welcome one, eschewing save-points or save rooms in favor of creating your own checkpoints as you go, so that no matter where you fall, you won’t have far to go. The first few times you succumb to the world, you may realize you’ve gone too long without a checkpoint; it won’t take long before saving becomes reflexive, and thankfully the game is relatively generous about giving you the resources you need to save often. In some cases, it will even strongly hint that you should save by granting you energy orbs to do so right before a tough platforming section. It is also generous enough to auto-save as you enter boss encounters, so in practice you are rarely ever left out in the cold by a bad save. 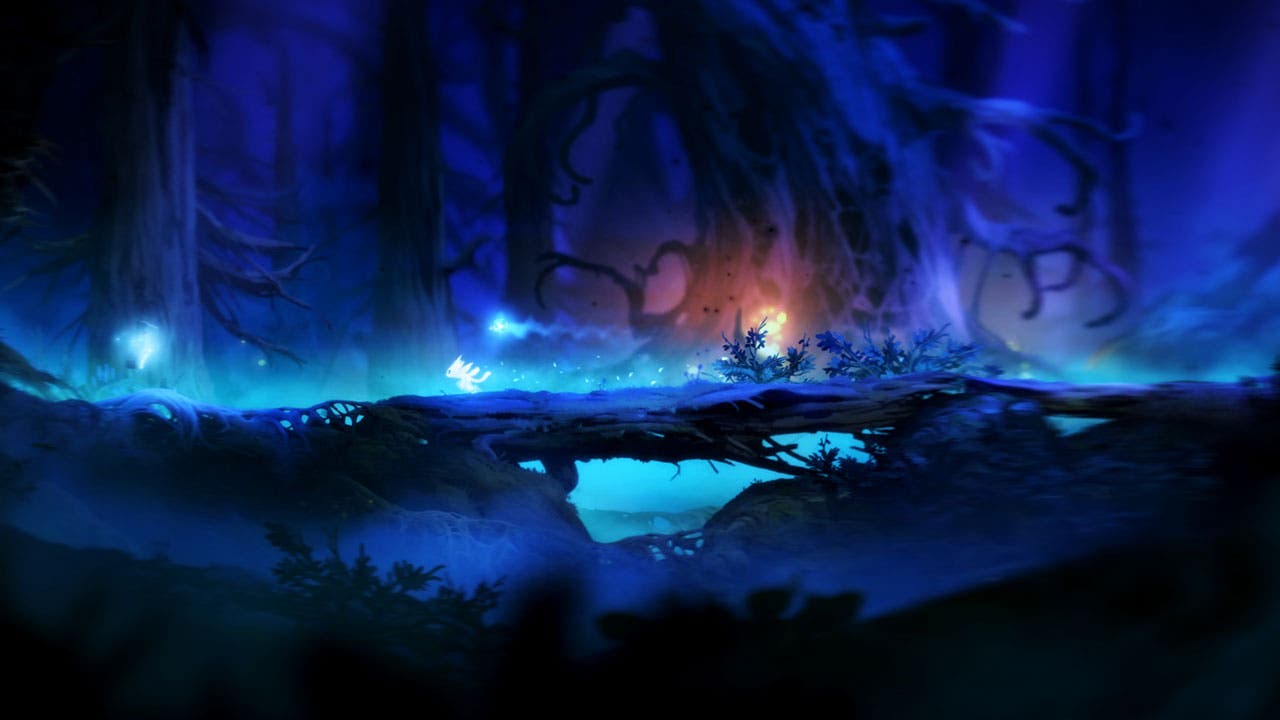 The culmination of all of these parts is that when playing Ori and the Blind Forest, you never feel lost or without direction. The game maintains a constant sense of momentum, is very smart about highlighting your objectives, and gives you all of the tools you need to keep pressing forward. This is also due in part to the excellent design of the world itself, which is both memorable as you navigate and clearly laid out with the critical path in mind, while also doing an excellent job of hinting about side-paths or hidden objectives.

The game plays absolutely flawlessly on the Switch, which is no real surprise, but is always pleasing to see. It runs at a smooth, constant 60fps and is highly responsive to your input. The remarkable thing here honestly is that there isn’t anything remarkable to note; it looks, runs and plays perfectly on Switch, which means it’s an ideal platform to play on, especially because you can take Ori with you on the go should you choose.

Interestingly, while Nintendo’s systems and accounts don’t have a concept of Achievements, the game’s Achievements from the original Xbox One release do still exist and are unlocked on-screen as you progress, presented as in-game graphical toasts that appear rather than using a system overlay style of notification. It’s a small nod to the original release and while these achievements don’t add to any kind of meta-score, they are still signifiers of progress for those who care about that kind of feedback.

The Definitive Edition release adds a long list of excellent updates to the original release, adding new areas to explore, a fast-travel system to reduce the amount of time spent backtracking, new abilities to be unlocked, and more lore to uncover. It adds refinements and new content to what was already an excellent package, ensuring that newcomers to the game will have the best possible experience with it. 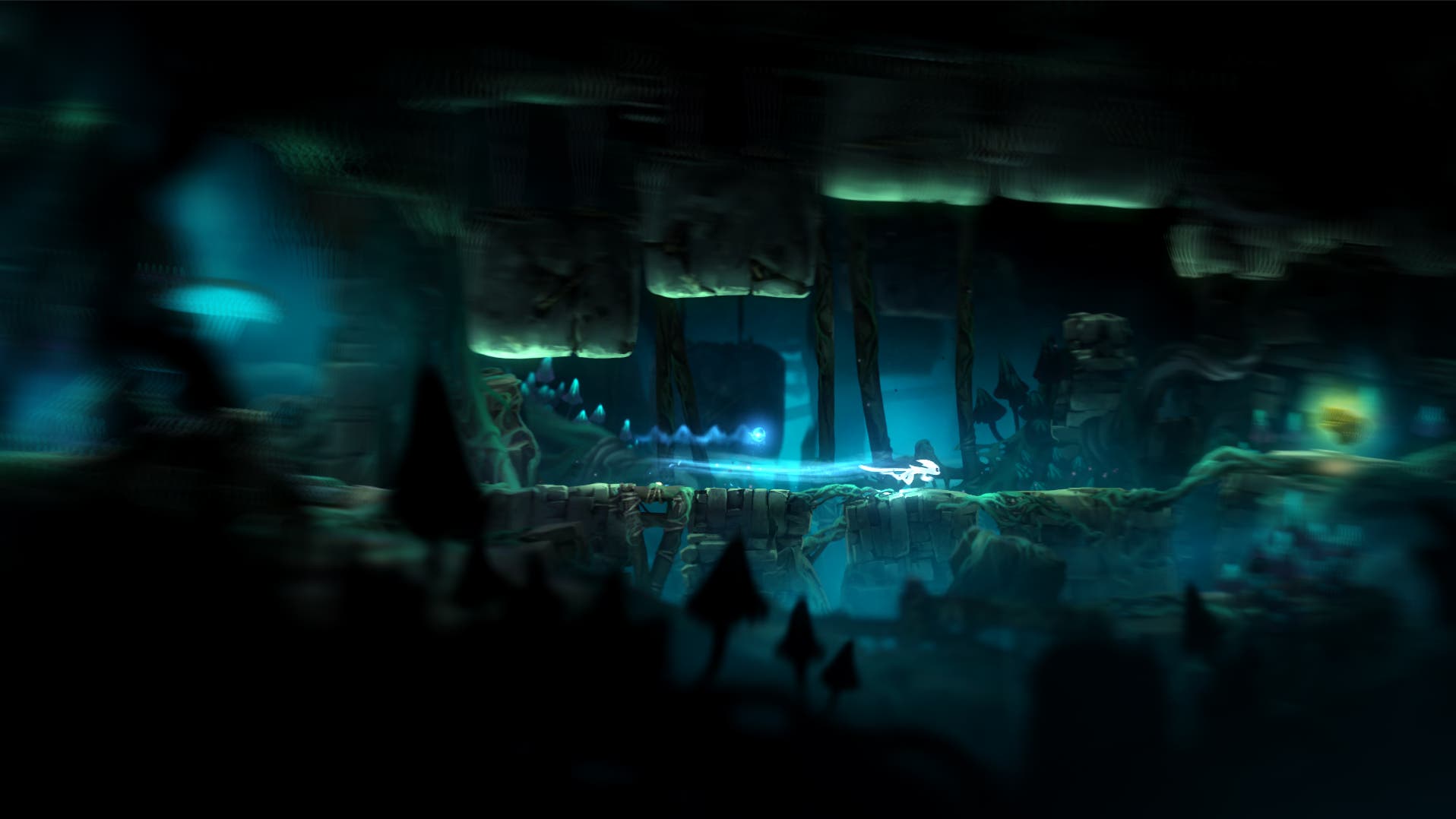 Ori and the Blind Forest is a truly beautiful game that plays amazingly, features an excellent musical score, and is fine-tuned down to the absolute tiniest details. It’s a masterclass in game design, and its presence on Switch in the form of Definitive Edition only adds to the long list of compelling reasons to buy into the platform. If this is any indication of Microsoft’s plans for releasing any of its first-party back catalog on Switch, then the future looks extremely bright.