Offworld Trading Company is a real-time strategy game in which money, not military force, is the weapon. Stake claims to resources, extract and develop them into goods and upgrades, all while buying and selling in the real-time, player driven marketplace.

“The further out into space we go, the harder survival becomes,” said Soren Johnson, lead designer for Offworld Trading Company. “Europa is completely uncolonized, so at the start of the scenarios you’re faced with surveying the moon, setting it up for life support, and then founding a colony there before you’re able to really start growing your business.”

Some of the highlights in The Europa Wager include:

The Europa Wager’s scenarios provide a host of new challenges to overcome as you try to establish a new colony that will stand against the frozen elements. Like the rest of the Offworld series, the expansion brings real-world elements into its gameplay. For example, although water will not be hard to find on the frozen moon, aluminum is non-existent. For more detailed information on the new content coming in The Europa Wager, visit the official forums.

Offworld Trading Company: The Europa Wager expansion will retail for $14.99 and is coming soon. Add it to your Steam wishlist here. For more information, visit www.offworldgame.com. 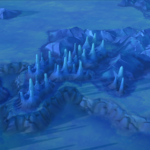