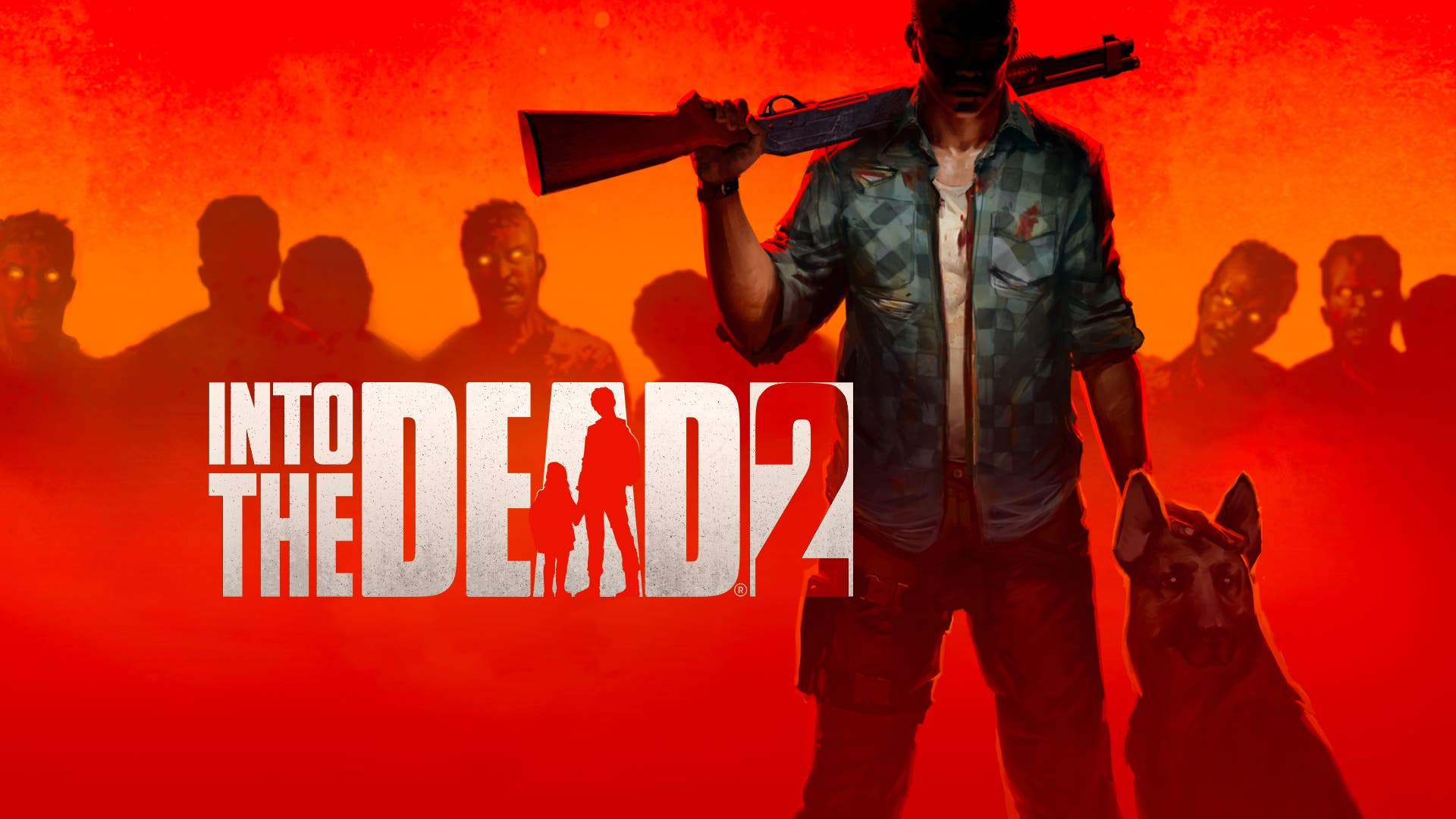 Into the Dead 2 Review

PikPok makes incredible mobile experiences, and the Into the Dead series being one of their best. With Into the Dead 2 on Switch, the transition from a free-to-play mobile game to a premium console experience arrives unscathed. There’s a breadth of content to explore here, and while it’s a different kind of first-person shooter and zombie game than you’re used to, it’s a blast. Into the Dead 2 is unique, content-rich, and just a lot of fun; so much so that you’ll be itching to come back for more.

You play as a father stranded from his daughter, with only his sister and immediate family having to take care of her. And you’re on a quest to make it from your location to theirs. It’s a long, arduous journey to join them, even chasing where they last were due to them having to be on the move. It’s unfortunate then that the game feels written by someone who doesn’t have kids. You’ll cringe at the “she’s my little girl” line repeated in different ways with each stage completion cutscene. Depending how you play, there’s three different endings to experience, and a whole lot more reasons to experience the levels. While they feature some similar looking environments with different lighting or color gradients, they are absolutely tense start to finish.

Into the Dead 2 is a reverse runner. You have to run long distances, either engaging zombies by shooting them with your limited ammo, or avoiding them entirely. The controls are rather limited, but offer enough to feel like you have agency in your movement and actions. You see, you can only move left or right as you auto-run forwards in basically a straight-line across a very wide lane. You can’t look around, but you’ll be able to shoot your gun and throw grenades. Ammo is scarce, but there are pickups along the way if you are able to guide yourself there. You can shoot to stun, or shoot to kill if you do enough damage. This guarantees a clear path, but at the expense of ammo. You can get caught by a zombie, and can use a one-time knife attack to escape. The next time you won’t get away. 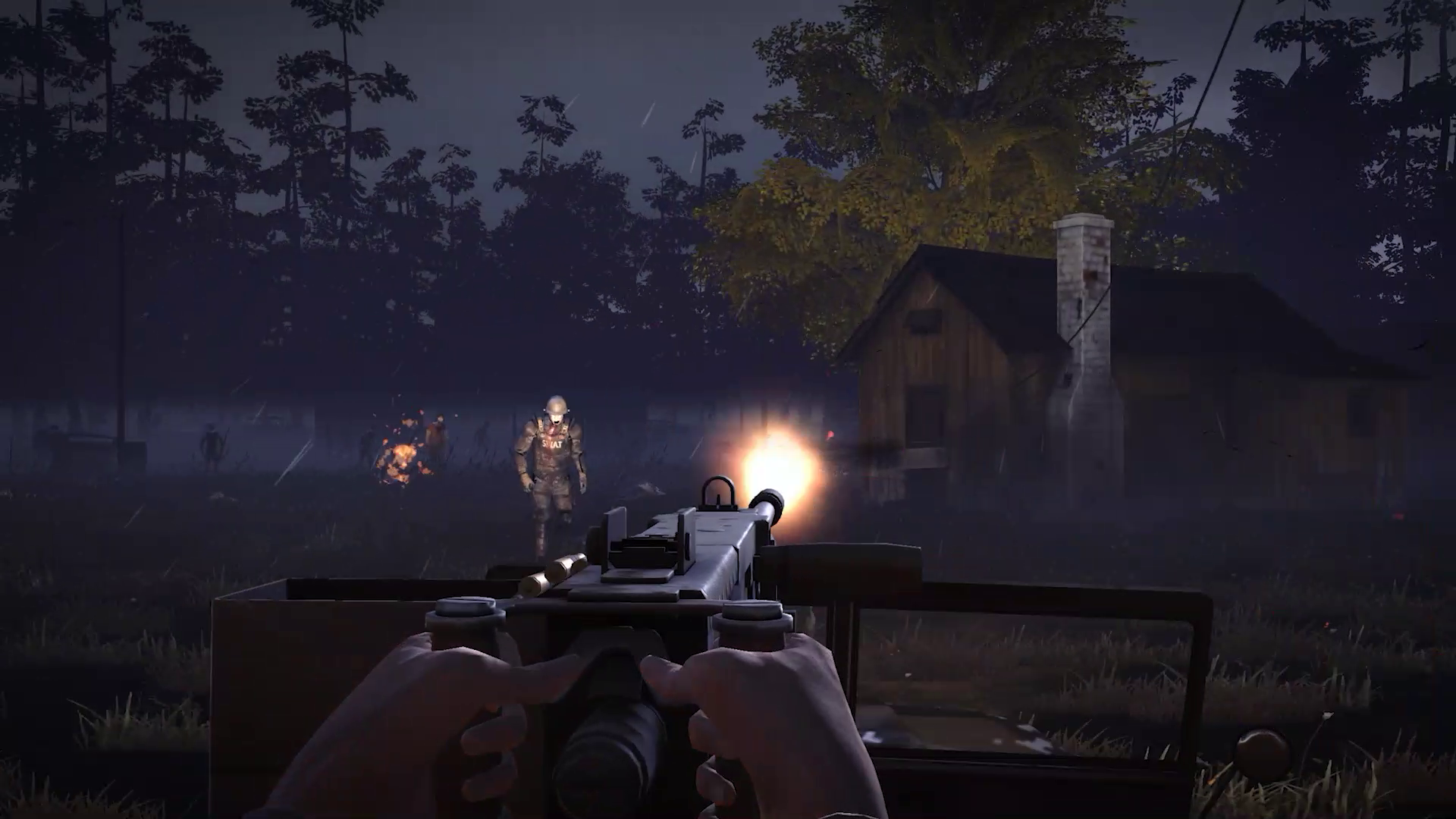 Taking place across 7 chapters and 60 levels, Into the Dead 2 has a fairly lengthy campaign offering. It’s worth noting that if successful, completing a “run” only takes two to three minutes. The game offers a lot of replayability. In each chapter, there are tiered rewards you can earn by completing challenges. Each stage can have up to five stars earned, and progress is saved with each run, no matter how you do. The levels are meant to be replayed, and can essentially be optionally grinded to complete these tasks to earn the stars to complete the challenges. It is fun going back to earlier levels with upgraded or newer guns that absolutely destroys zombies in one hit.

Weapons are a big part of the game, as you’d expect, with around 25 weapons in different classes. You’ve got your pistols, shotguns, assault rifles, rifles, sniper rifles, and more. Each weapon earns unique experience, and can be leveled up with the currency earned in the game, gold. Gold comes and goes rather quickly, gating you from upgrading too quickly but never too slowly. There’s also weapons you can pick-up like a chainsaw which has a temporary use, but clears a path for you. Other times there’s turrets you’ll use for half of the level which make you feel incredibly badass. These moments are few and fleeting, but great all the same.

Aside from the story, is the Arcade mode Arcade Mode. You play for high scores that unlock special weapons for use in other modes, or more importantly gives you extra gold to purchase and upgrade your weapons. As you complete one challenge, the next challenge opens up. This is a fun mode without any story, and is best for quickplay or shorter game sessions.

Side Stories are probably the biggest part of the game, aside from the story. There’s over five side stories that have their own series of stages and story arc. Some are related to the main game, and others not. In total, there’s about 36 additional levels that explore new places and introduce you to new weapons. These side stories are not available from the get-go, and unlock at different intervals, like stage 17, 31, and so on. In these stories, you’ll find you have way more character interaction with people where the main game doesn’t, arguably making this more interesting. There’s even new companion benefits where they will help clear the path for you with covering fire. This is a lot of content. 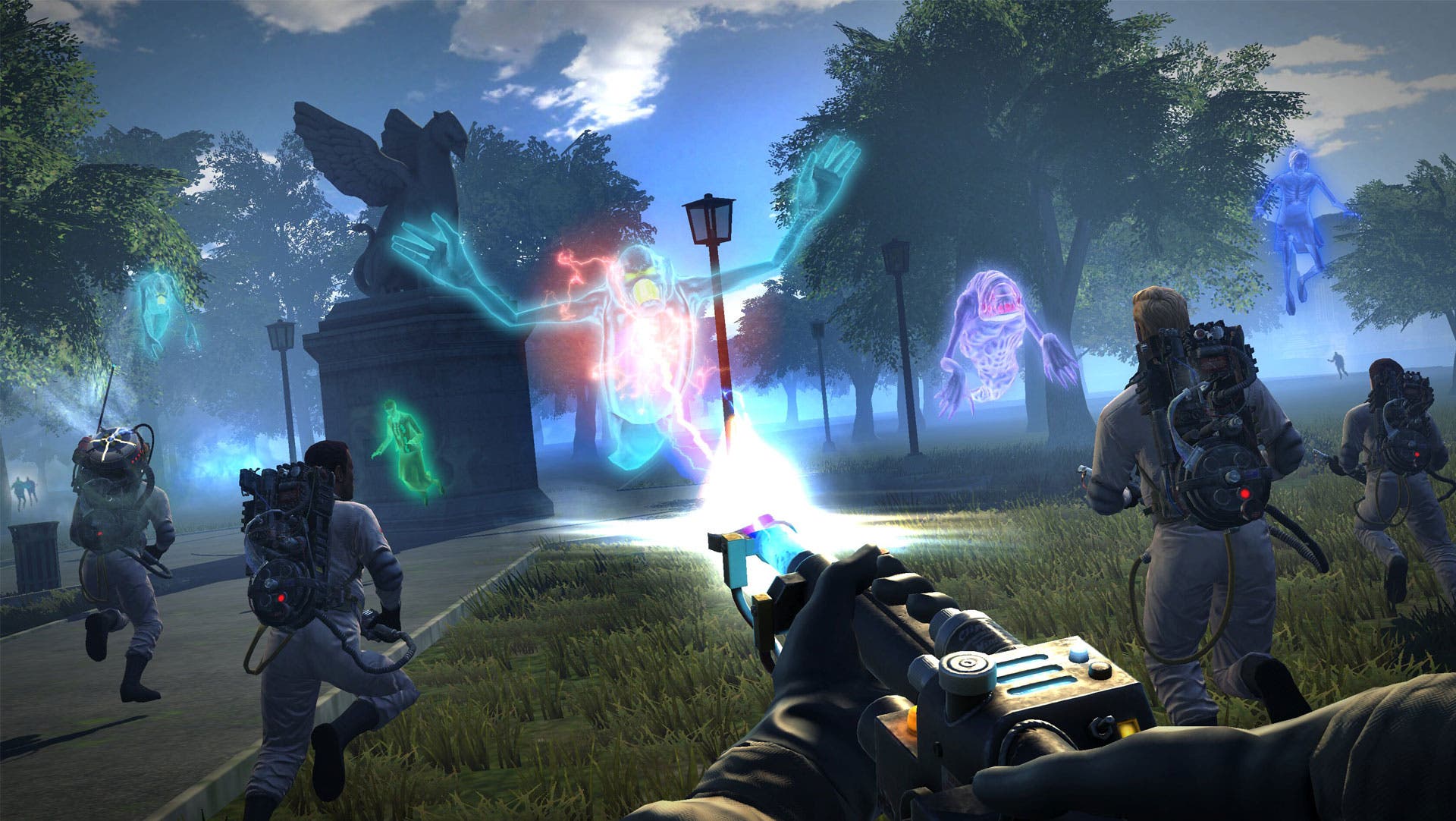 There’s premium DLC available separately or in a bundle via the eShop, or when buying the physical edition of the game. When you complete stage 47, you get access to the Night of the Living Dead DLC. It ties in perfectly, and takes you to some new locations that replicate the film classics. When you complete stage 60 of the story, you unlock the Ghostbusters side story. This one is interesting as the look of the Ghostbusters takes on the Real Ghostbusters cartoon. You’ll get access to proton packs with blasters, boson darts, and meson collider just like the Ghostbusters – The Video Game on consoles and PC. The parity between these games is really appreciated, and easily the best part of the side stories – which was saved for last. You’ll even be able to purchase these weapons for use in other modes.

If you are even remotely interested in one or both of the DLCs, buy the bundle or physical edition and save some money, it’s absolutely worth it to have it. It feels more complete.

Companions are a really interesting option in the game. You can bring a doggy friend into the levels with you. They are protected from harm, in that they can never die. They will run out and attack zombies which can help with challenges that involve killing a certain number of zombies, or find ammo caches to restock at. They too can be leveled up to bolster their abilities. With eight to choose from, each doggo has its own trait and feature, and all of the dog breeds are different. So even if you don’t care about what they can do for you, you’ll find your favorite to tag along with you.

Boosts are items you can’t purchase, but are consumable and are earned. At the end of a stage, you’ll open a bag containing three things that can benefit you, one or two of them will be boosts. You can only pick one of them, so choose wisely. Some examples of boosts will be items that make reloads faster, load your weapons with incendiary rounds, or use explosive ammo. To use them, you can equip one for each weapon to use for that stage. Once it is used, it’s gone unless you have more in your inventory. The boosts are just that, bonuses to gameplay that aren’t a necessary. I’ve played most of the game never using them, only when testing how these affected gameplay. So it’s never a disadvantage by not having them. 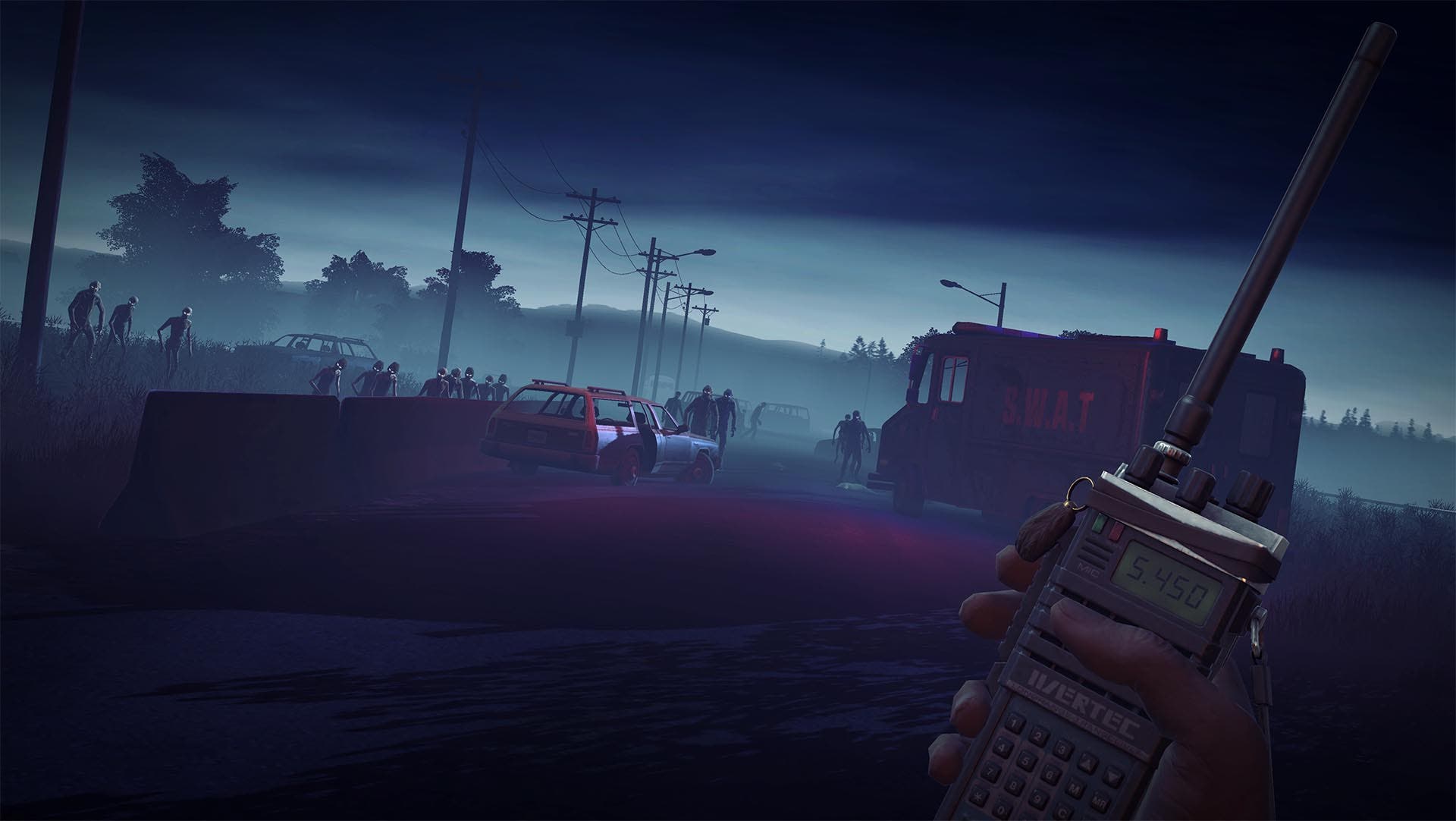 With a unique control scheme, Into the Dead 2‘s combat is simple yet compelling. You’ll encounter different zombie types, dodging attacks, and avoiding pockets of zombies as you run from one area to the next that’s always exhilarating. There’s so many levels to play, and ways to experience the game that it begs for “one more run”. Into the Dead 2 is a shining example of a mobile to console game done right.