Robert Kirkman is synonymous with The Walking Dead, but his other successes include the Thief of Thieves comic book series. It’s since been made as a video game that’s been released onto other platforms, and now Thief of Thieves: Season One has finally come to the Switch. Unfortunately though, this version will steal your enjoyment of it, thanks in part to its performance and technical issues. Thief of Thieves: Season One is a game worth playing, if you can deal with the problems it has or by avoiding the Switch version entirely.

The game introduces you to characters and the game’s mechanics all in one sequence. You play as Celia, the heir apparent to Redmond, a master thief. Perhaps this is expected, but your first heist falls apart rather spectacularly. On the run, and caught by federal agents, you recant your happenings that got you to that point. It allows for the story to be told in a way that makes you feel like you’re crafting it. Along the way you’ll learn more about the people in and around the heists, which are strong and developed. If Thief of Thieves does anything well, it’s the characters — even if the voice acting isn’t even across the cast.

There’s four Volumes, which all tie-in with each other in order comprising of three to five chapters within them. Each Volume heads to new and exciting locations, and each heist feels completely unique from the last. I’d say Thief of Thieves: Season One starts off slow with Volume 1, but the subsequent Volumes pick up the pace as the game begins to trust you in your skills. When it was time for credits to roll, I had clocked in about 5 hours.

Combat is not possible in this game, as it’s more about stealth and stealing. So in that, the gameplay is rather shallow but offers a decent challenge. You’ll have to sneak, eavesdrop, and gather details about your environment before you make any big moves. Watching security patrols and patterns, learning who has security access that you can take, and manipulating the conversation are all part of it. As each Volume progresses, you’ll get more comfortable with the controls and systems. The final Volume is a culmination of skills, to include utilizing social engineering in really interesting ways.

Sure you can sneak, run, sprint, and even chat your way through levels. How you do it well is by utilizing intuition. It’s a simple button press on the controller to give you additional information and insight within your environment. It doesn’t give anything away, but it does give meaningful hints. It doesn’t work like HITMAN‘s instinct, as it doesn’t alter the vision, but uses text to guide you. 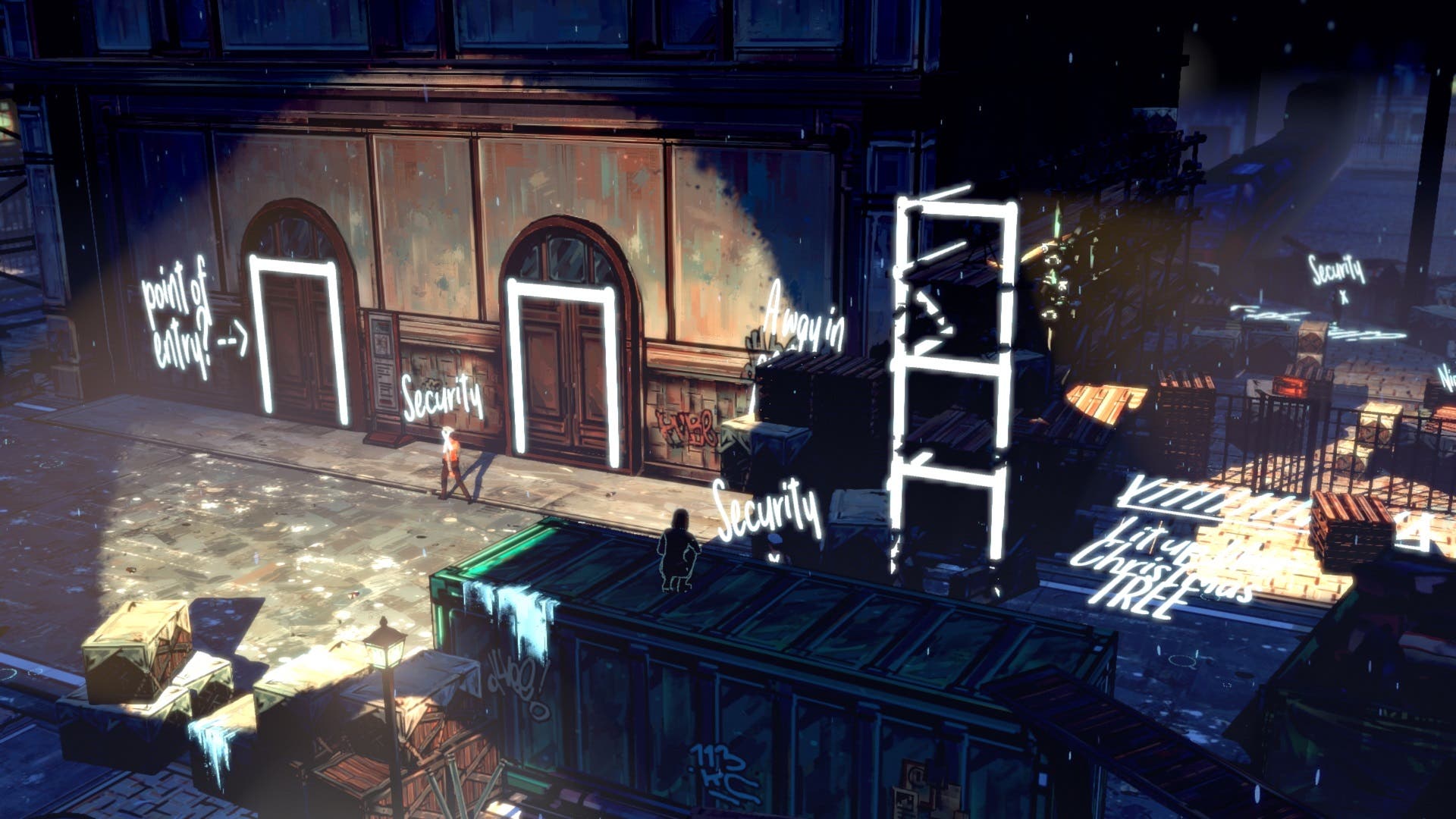 In-between large sections, usually between Volumes but sometimes at chapter breaks, you’ll have downtime. You can talk to all of your new crew members at the base, better prepare for the next heist, and even complete some hidden objectives. When on a mission, there are requisite objectives, as well as optional ones. There’s no real benefit by doing more than discussed, but characters will acknowledge them after the fact. When chatting, you’ll have to make dialogue choices. These are incredibly fast, so you need to be paying attention and really decisive. At times, the options are almost too light to see. These conversational choices can be revisited from certain characters, but for storyline reasons they weasel out of committing too hard to any of them.

You’ll pickpocket, lock-pick, and hack in almost every level. It’s not as easy as it seems. Since sound is a factor, people can hear you clacking on a keyboard or using that bobby pin to unlock a lock. Getting caught is frustrating and an instant game over. Distractions are important to buying you the time needed. Thief of Thieves: Season One handles being a thief in somewhat realistic manner. Performance on the Switch is rather abysmal. The framerate is not great, and can barely hold a constant 30fps. There’s some really jittery and janky animations. Characters will frequently be out of place, and rush to get into position like it’s a poorly rehearsed middle school live theater production. It’s often buggy, and characters will be standing on top of furniture, doors will misbehave, and other oddities. I even had a crash to the home screen, which admittedly only happened once (which is an absolute first for me on the Switch). Not to further bash the game, but it’s important to know that this game has some really long load times. The game is installed on my microSD card, and load times were around 55 seconds no matter it was a cold load or reloading a checkpoint. So you really have to be careful in missions, if you get caught and fail any section, it’s a painful reload time to endure. It’s like being double punished.

Thief of Thieves: Season One is done in the same art style as the comics, but it doesn’t look as good as the other platforms, compromises were made, and I’m not sure why. Given the performance, it makes sense, but I don’t see it any more demanding than The Legend of Zelda: Breath of the Wild. That said, you’ll find plenty of blurry textures, aliasing, and pop-in throughout your time. How much of any of this you can endure is up to the individual, but for me it was extremely distracting and off-putting.

Thief of Thieves: Season One is interesting, but on the Switch is hampered by a myriad of issues on every level. The story comes to a satisfying close, but the inevitable tease to season two is an exciting setup. I look forward to being around these characters more, and performing more heists with them. Thief of Thieves: Season One is fun, intriguing, and tells a great interactive story. You should just do so on any other platform but the Switch.