NASCAR Heat 4 is this series’ most solid title to date but also the one with the most minimal of changes. NASCAR Heat 3 had a good thing going for it, so kudos to the team for keeping Heat 4 so close to what we got in 3. That’s not to say there aren’t some flaws and things I would like to see improved.

Heat 4 still retains the series’ top-notch physics, and included are what feel like some welcomed additions to the A.I racers. As I was driving through the pack at places like Talledega and Atlanta, I could feel as if the drivers were smarter out there. Or at least more A.I. was racing in various lines. On restrictor-plate courses, though, things still bunched up on the low line, which will always come out on top.

If that’s all you come for to a NASCAR title, then you’re not going to be disappointed. The racing is just as fun as ever. For me, though, it’s all about that Career, and this year not much has been touched. The U.I. is more streamlined, but in the course of doing that, it’s lost some of the garage atmosphere. Even though I don’t feel as if I’m in a race shop anymore, it’s not something I feel a loss over. You can still game the employee specialization metrics by focusing each on a single tech path: Aero, Engine, Suspension. As I’ve mentioned with last year’s title, when you assign a crew member to one of these disciplines, only the assigned discipline is factored into building the chassis. So, for example, I have Maria with a 5 in Aero and a 2 in Engine. When I assign her to the Aero portion of my chassis, the game will only use that stat. It will ignore her Power stat. I still feel as if building your chassis should factor in all a crew member’s stats. 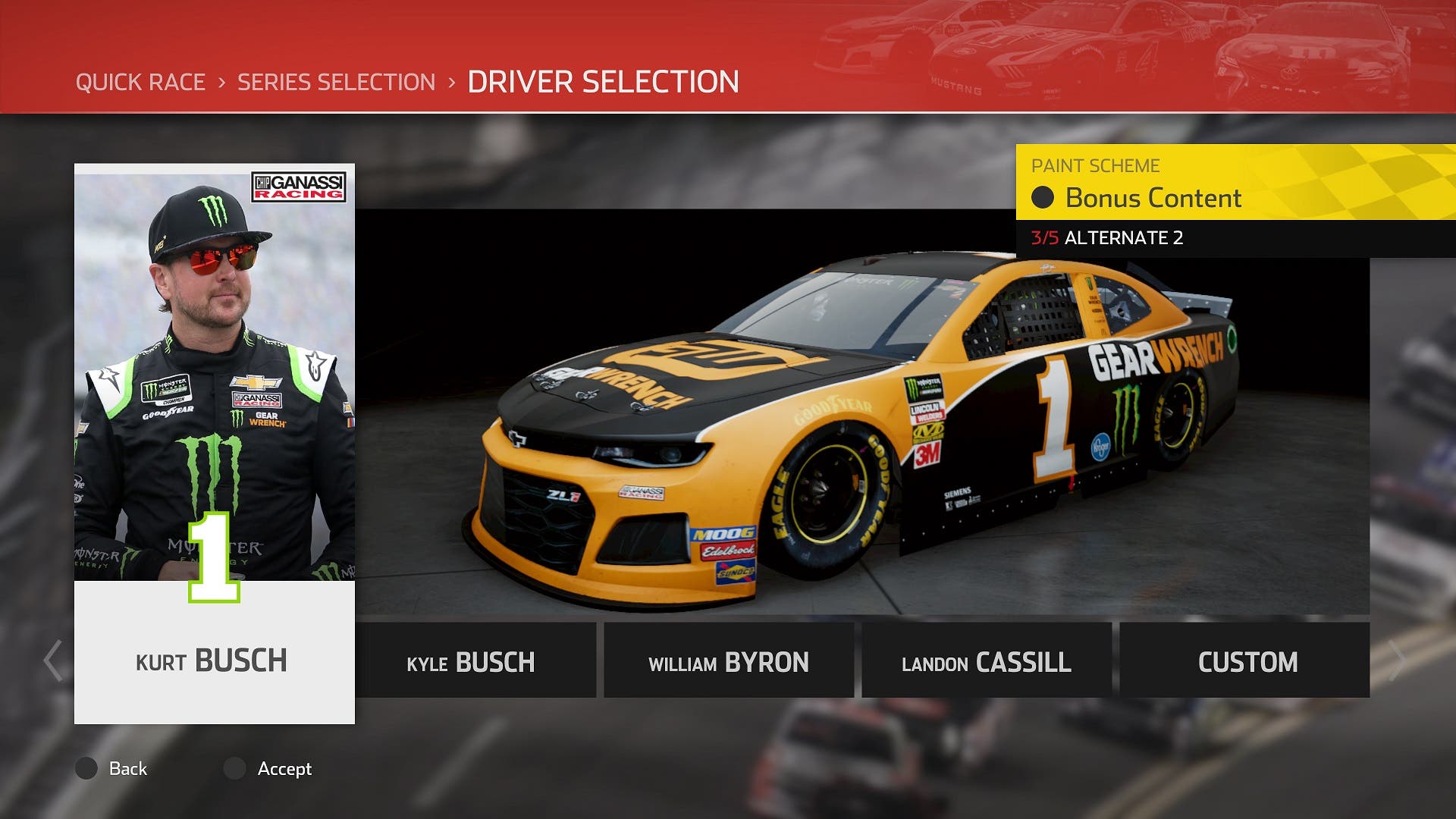 Last year before the patches, you were unable to choose your car brand when starting your team, and luckily, they have made that a shipping feature this time around. But with one positive comes one negative, the manufacturing choice ties itself to a sponsor choice. I even had a weird bug where the sponsor ended up being different when I went in to design my paint scheme. Hopefully, un-pairing the sponsor and manufacturer is something that will be fixed in a future update or at the very least Heat 5.

One of my complaints from last year is still missing this year. You can’t re-use crew members from a different series. I spent the money and effort upgrading my dirt crew; I would like to be able to use them in my future series career, even if it came at a stat loss or something. Or losing them in the lower series if I decide to move them up. It seems inefficient to start all over again when I have people who at least know something. While we’re talking about teams, why can I still not name my team or create my team logo? Only being able to pick from 5 pre-selected names and logos is no bueno.

The other thing I would like to see in a future installment is more in-depth ownership options. It’s great that I can be the rare breed of owner-driver, but I would love it if the game let me dip my toes into multicar ownership. It would be great if I could hire a 2nd driver to race the 2nd team in my garage, manage their sponsors, and so on. Maybe for Heat 5, who knows!

One feature that does need an overhaul is the Friends/Rivalries system. As with last year, you can compliment & apologize every time, and your relationship will be fine. It doesn’t seem like it does much within a race anyway because I haven’t noticed much retaliation or a lack of people willing to partner up. I still think the short video vignettes of drivers reaching out to you is corny. Unfortunately, you can’t just compliment and move on. You have to watch it.

I did not get to test Online during my time with Heat 4, but do know that it is still in this year’s release.

NASCAR Heat 4, at its core, is still an amazing NASCAR experience. The physics are tight and what you expect to feel when driving. The A.I. seems smarter, and even if it isn’t, they still do a great job of reacting to your presence on the track. But even with how good the core is, the game is still plagued by a career mode that needs some more work if it wants to hold my attention for longer and get me into the Cup series.

A Steam code was provided by 704Games for review purposes