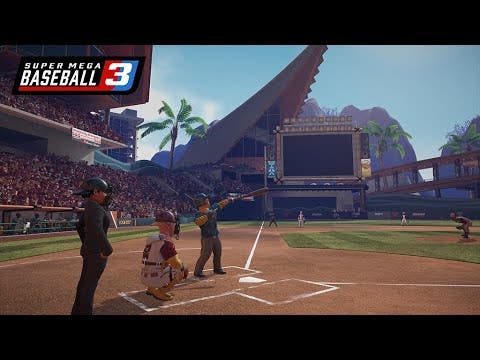 Get even more pumped for the upcoming April release of Super Mega Baseball 3 by checking out this new trailer that gives a peek at new gameplay footage and an overview of the game. Future reveal videos will go over new features in Super Mega Baseball 3, so be on the lookout for those.

Super Mega Baseball 3 will release this April with cross-platform play on Nintendo Switch, Xbox One, PS4, and Steam for $44.99 USD. The game will have the deepest on-field simulation yet, comprehensive online and offline game modes including a brand new Franchise mode, and vastly refined graphics. In addition, Super Mega Baseball 3 offers a revamped user interface plus tons of new audio, team/character content, and stadiums with variable lighting conditions. All this with the same easy-to-learn gameplay that scales seamlessly from beginner to super mega levels of difficulty, as well as the continued ability to hit batters and knockout pitchers.