Operencia: The Stolen Sun is a dungeon crawler that looks modern, but acts like a classic. Zen Studios does something new for the studio, emulating games like Legend of Grimlock or Wizardry before it, but have given it a fresh spin using Central European folktales as the backdrop for its story. Operencia: The Stolen Sun is hampered only by design decisions that don’t give you the freedom of choice that you’re inclined to believe. It is however, a fantastic adventure start to finish with excellent gameplay to back it up. As the subtitle implies, someone has stolen the light from the days, and the land of Operencia is in perpetual darkness until our would-be heroes solve the crime of the century. This unique fantasy backdrop is steeped in lore, with lots of material to work from. Operencia is a strategy, turn-based RPG, with tile-based movement. If you’ve never played game of its ilk, then you’re in for a treat. Otherwise, it’s pretty standard for the genre, and really good at it.

For an indie game, this tells a deep story, complete with hand-drawn cutscenes, narration, and voice over for each of the characters. They even have long-form dialogue back and forth that’s almost exhausting to listen to. The voice acting is pretty well done, but certainly has its moments. Running in Unreal Engine 4, Operencia: The Stolen Sun is gorgeous and vibrant. The prologue mission looks great, but it’s not until you get into the game proper where you see how inventive and colorful it all is. Lake Anna for instance, one of the earlier levels features standing water, but it sits above you instead of below. It just has a unique look, as does all of the thirteen levels you play. It’s a game you have to see for yourself, and show to others. 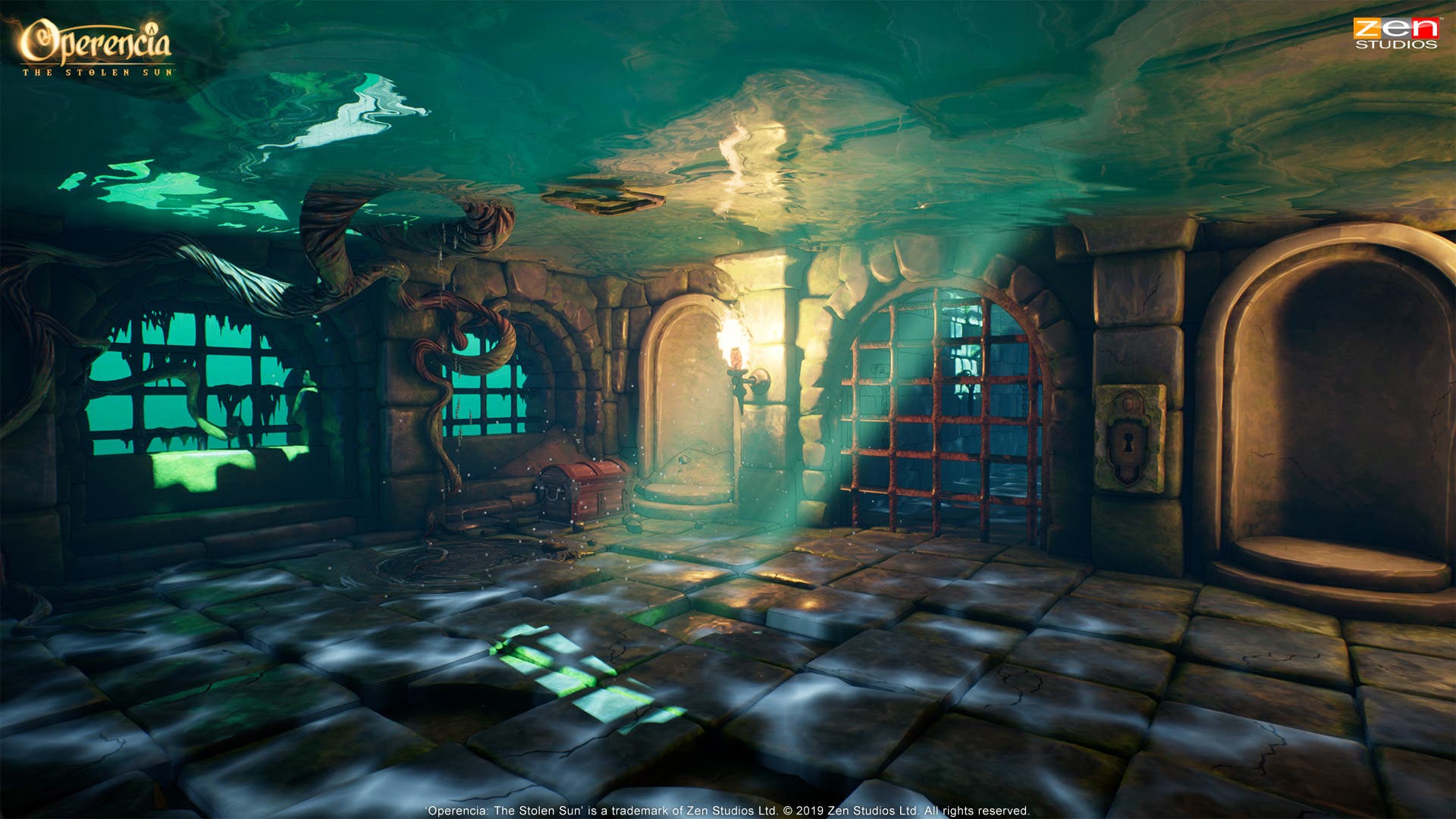 Operencia lets you design your own difficulty. You can select Normal or Hard versions of certain aspects. Cartography is a toggle between auto-mapping, and you potentially drawing your own; Battle-Hardened decides whether you want auto-saves and better resting or not; Permadeath is either just on or off, meaning if your whole party dies, you start back at the beginning of the game; Finally, Betyar decides the enemy difficulty of the game. While I love that you can tailor the game to your experience and preferences, I would have liked to see an ‘Easy’ setting, along with a way to modify any of these should the need arise, but that’s not an option here.

There is a character creator in-game, it’s a bit limited in terms of your character’s look and their portrait. You determine the class, general look, their origin, attributes, talents, and lastly their name. It’s robust enough to feel like you’ve created a character all their own. You will come across new characters that join your party, but you don’t design anything else. This is because of all the aforementioned voice acting and cutscenes that these characters appear in, that wouldn’t work otherwise. At most, you’ll have seven party members, but only four can be active at a time. Thankfully, they earn XP passively when they aren’t actively used. Much of the game involves combat. If you get behind an enemy, you can initiate a sneak attack, or ambush on them. This allows you to get the first hit in combat, which in some battles, can be the difference between winning and reloading your save. There are three lanes of combat: close, medium, and far. I haven’t found anything where this matters too much, ranged weapons tend to do better at distance, but even a melee fighter can slash at the backrow no problem. It’s when you start to mix in the elemental effects: lightning, fire, poison, etc where the game offers a lot of depth, but you can get by on the normal difficulty without having to min-max on these things, just need to concern yourself with your health and mana.

The rest of the game is solving puzzles, which are mildly challenging and require lots of backtracking. In fact, some puzzles grind progression to a halt. It’s not that big of a deal, but you can’t really do much else until you solve that one puzzle to open more things up to you.

The save system leaves something to be desired. This is game you can’t save scum with quick save and quick load. There are campfires you can save at, which are specific points on a map. You can save often, if you keep traversing back. Characters do not replenish health or mana out of combat, and must rest. Rest uses firewood to do so, which must be used sparingly in order to not run out at a crucial time. The way saves work, does force you to think more critically when to save and rest.

Operencia introduces crafting several hours into the game, and it’s intricate and detailed. You’ll have to obtain a cauldron as part of a quest. It’s really clever, and it just becomes a part of your campfire routine to make potions. As you learn new recipes, you’ll have to read the clues to decipher how to make it. It again, is something really clever that isn’t too hard, but doesn’t make things easy for you. Potions and items will replenish over time, unlike party member’s health.

Some of the quests intertwine, and require ones to be completed over others. It’s hard to know this from the outset, so you may want to focus on a single quest to completion, but that’s not how it works here. It’s not a real problem, just something that’s part of the learning curve of the game.

Movement is swift and responsive, which is not how you’d attribute movement in these types of games. You can use traditional movement of rotating with Q and E, with WASD to move forwards, backwards, and strafing. Or you can use the mouse to looking and rotating your character. It feels close to first-person controls, but you feel very planted to the ground when you try to do something more free-form. What I enjoy most is the intimate feeling the game provides, which is easily the best part of something like Operencia. The movement and confined spaces (even when outdoors) maintains this feeling well. 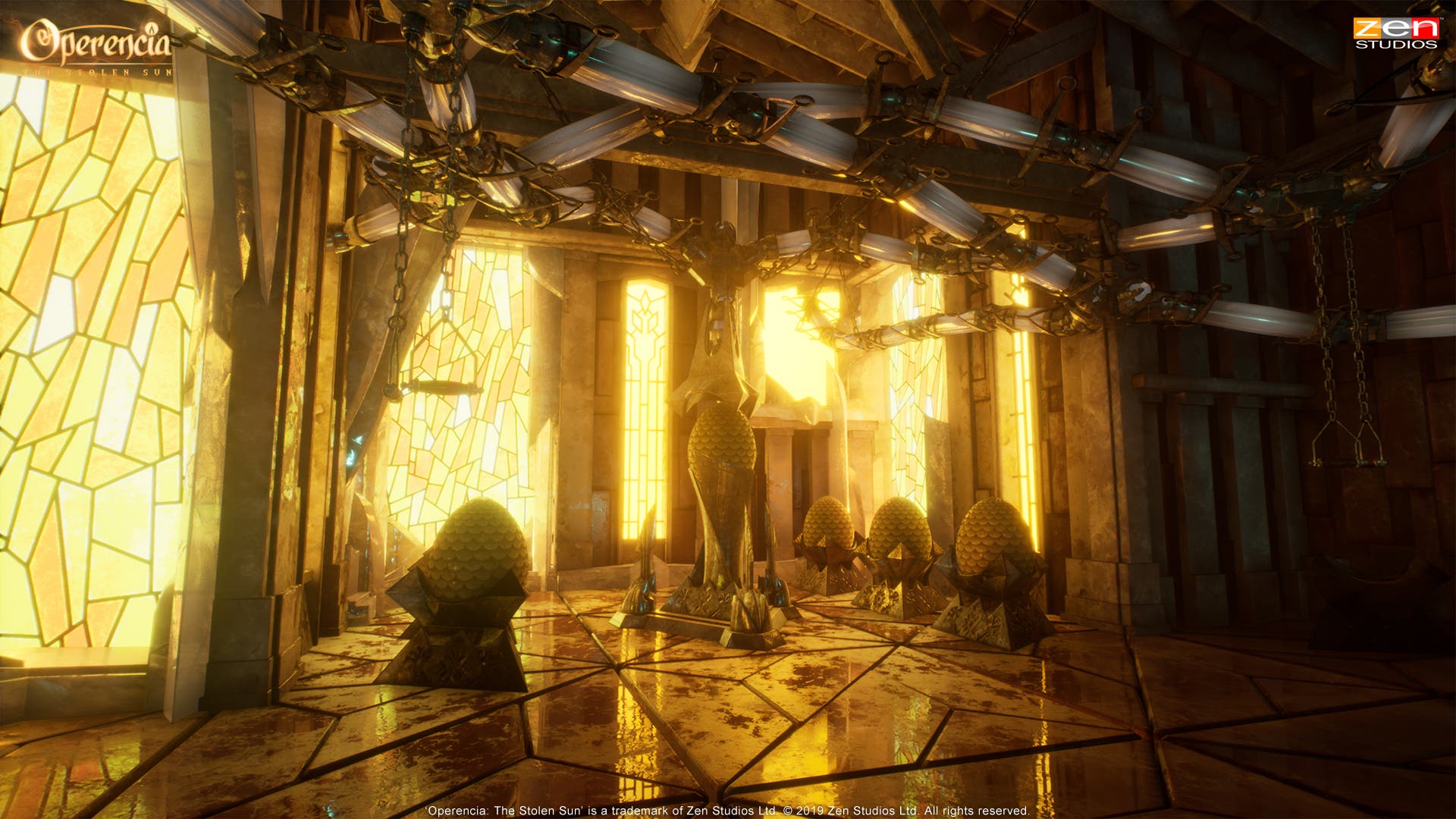 Operencia: The Stolen Sun is full of charm, depth, and secrets that represents the best of the genre. There’s a lot of satisfaction in completing its puzzles, and overcoming enemies in combat. If you’re not a fan of backtracking or the way the saves work, you might not enjoy yourself as others in the genre. However, I think it’s an obstacle that you can easily overcome. The combat and puzzles are the majority, and the highlight. Operencia: The Stolen Sun shines bright in these dark times.