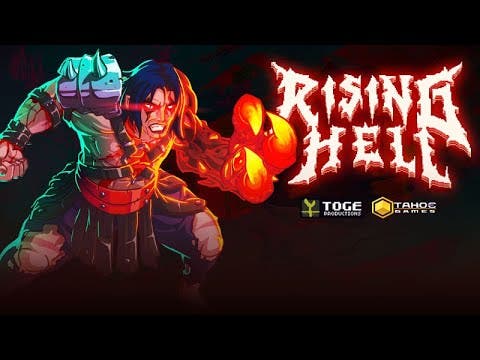 Rising Hell gets a FREE Prologue level to try the game before you buy, new character available to unlock in full game

Jakarta, May 13th, 2020 — Rising Hell is getting more attention now with many online events happening lately. Here, Toge Productions, along with developer Tahoe Games want to give a chance for more people to try the game by releasing a prologue level that is free to play on Steam. Jump into the first level of hell and create chaos in this adrenaline-pumping roguelite action platformer!

Having the full game launched in October 2019, the developers have added and tweaked several features such as talents to improve heroes’ abilities, artifacts as powerful but temporary power-ups, and relics that determine player’s playstyle before starting the game. Up to this day, there is a total of more than 50 talents and 20 relics in the game. Not only that, we also revamped the appearance of Arok, the first playable character after receiving suggestions from players.

Last but not least, the third character is now available to unlock! Each character in Rising Hell has their own fighting style. While Arok is a melee fighter, the second character, Zelos, is a long-range fighter. The new character, Sydna, is a short-range fighter with a unique mechanic. She hurls deadly Phantasmal orbs as her weapon. The orb attaches to nearby allies, dealing only a small amount of damage, but after a while or when enough orbs are attached to enemies, they explode, dealing massive area damage.

Learn more about the game: