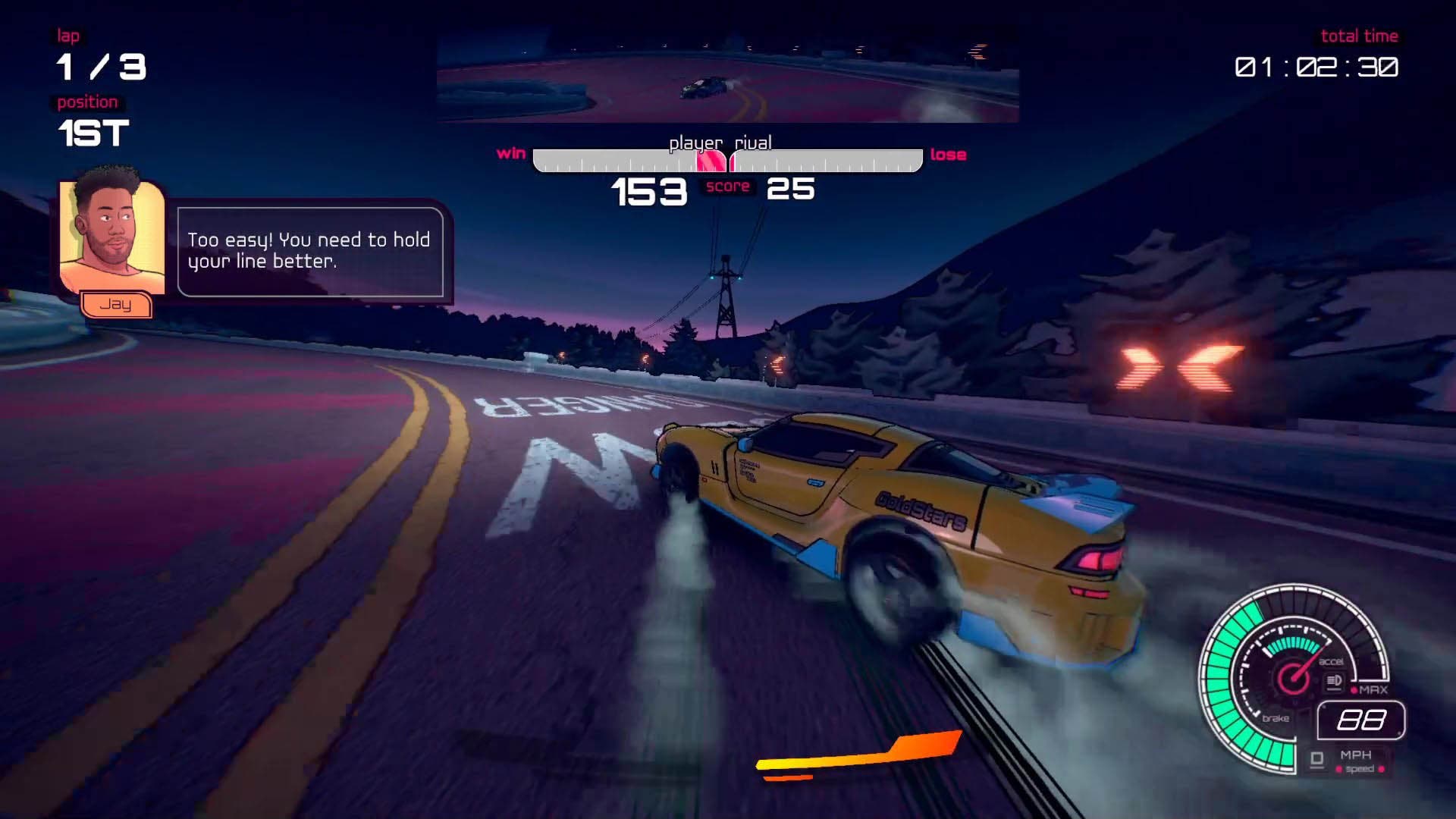 Inertial Drift features an unconventional control scheme, but that’s its entire charm and selling point: twin-stick drifting. There’s a decent learning curve to get the hang of it, but the game eases you in. This is a game where it’s not so easy to learn, and definitely difficult to master; though practice certainly makes better. Gas and brake is as you know it, with the left stick turning your front wheels. However, they do basic left and right movement, but to get the most out of it you need to use the right-stick, which serves as a modifier to then start bringing out the backend of the car to either direction. This takes a while to get used to, but it won’t be too long before things start feeling Zen-like as you are weaving through S-turns and whipping through corners.

There’s a story to be found here. It’s a game set in a 90s retro future that’s both aesthetically pleasing, but from a storytelling point of view too. An interesting thing, is the fact that the game’s difficulties are determined by the car you’re driving, but the drivers are all different. Each with a different point of view in the overall narrative. All drivers are working on becoming better for the upcoming ‘Summer Grand Prix’. Story mode is surprising, as every person is relatable and every character is likeable. In most cases, they are all empathetic and really care about you as a person. I can’t even call any single character competitive, they’re all supportive and just looking for a good time. There are moments of them egging you on, or chastising for a bad run, but even if you lose, they tend to talk you down. It’s as bizarre as it is welcome, a much needed touch for racing games. 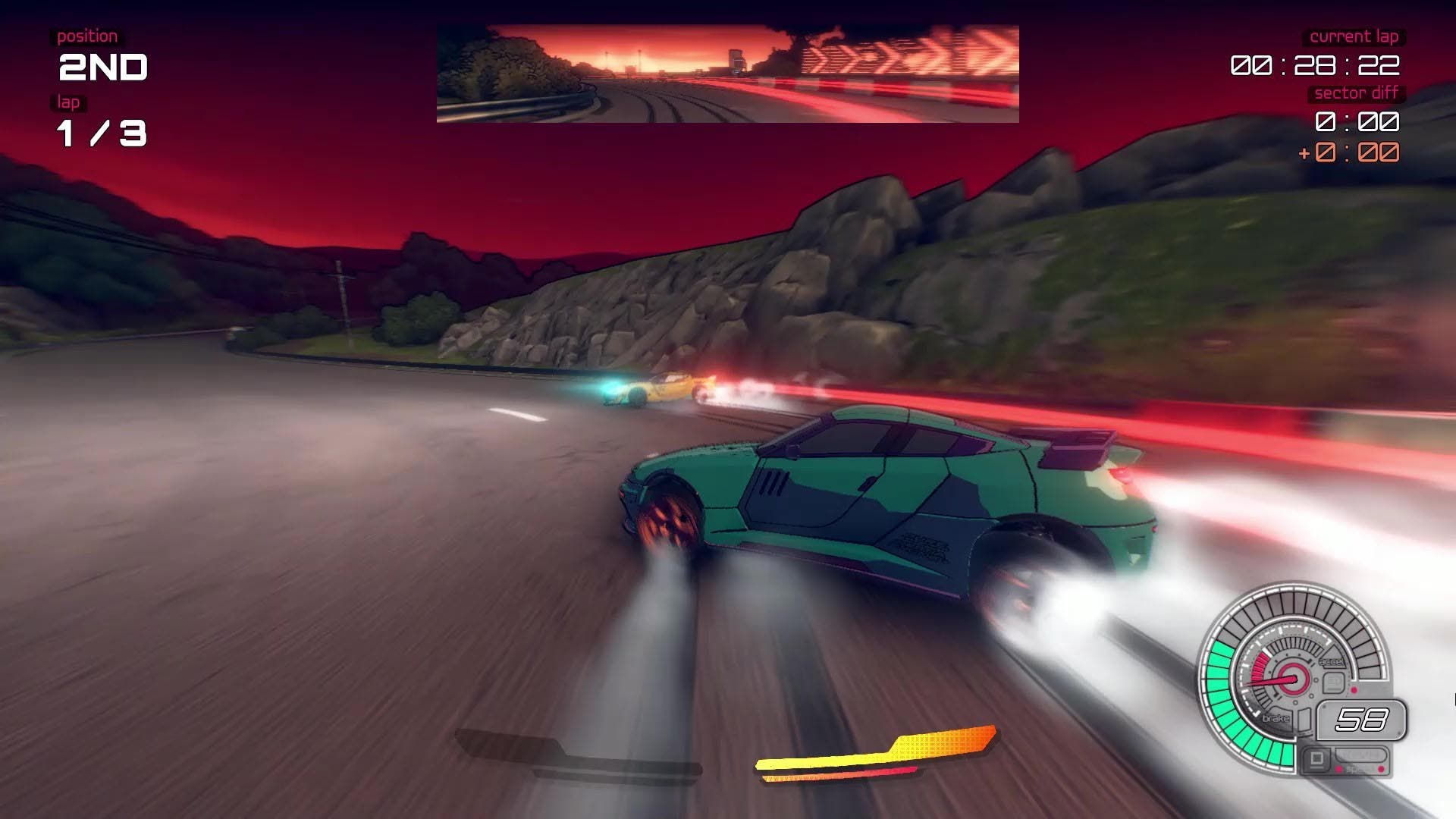 Throughout the story, you’ll take on a variety of race types. Race which is a one on one battle across three laps. Duel where it’s a three-lap race, but points are earned for those who are in first place, first to 1000 points, wins. Time Attacks are fairly standard, going to beat the target time in the fastest way possible. Ghost Battle has you facing a ghost to beat it for best time. Endurance is a test of patience and will, but a great way to spend your time. And lastly, my favorite race type is style, where-in you must drift with incredible accuracy and combination to earn the highest score. There are medals awarded from bronze to gold, but you can even earn a platinum award for those truly special times or scores.

Inertial Drift has everything. Nearly every mode you’d want or expect is here. My favorite aside from the story is the challenge mode. It’s pretty much the story mode, but with more stringent requirements to pass them. It’s win or lose, no in-between. It seems by design the challenges don’t feature an ability to restart. So it becomes a bit of a laborious process to get back into the action (which really isn’t all that much), but it would be nice. I really enjoy this mode as it puts your skills on trial. Similarly, Grand Prix is not only a test of patience as you work through five consecutive races, with only three restarts for the entire thing. It’s an all or nothing mode, that if you can’t win all the races, you lose and must try again. 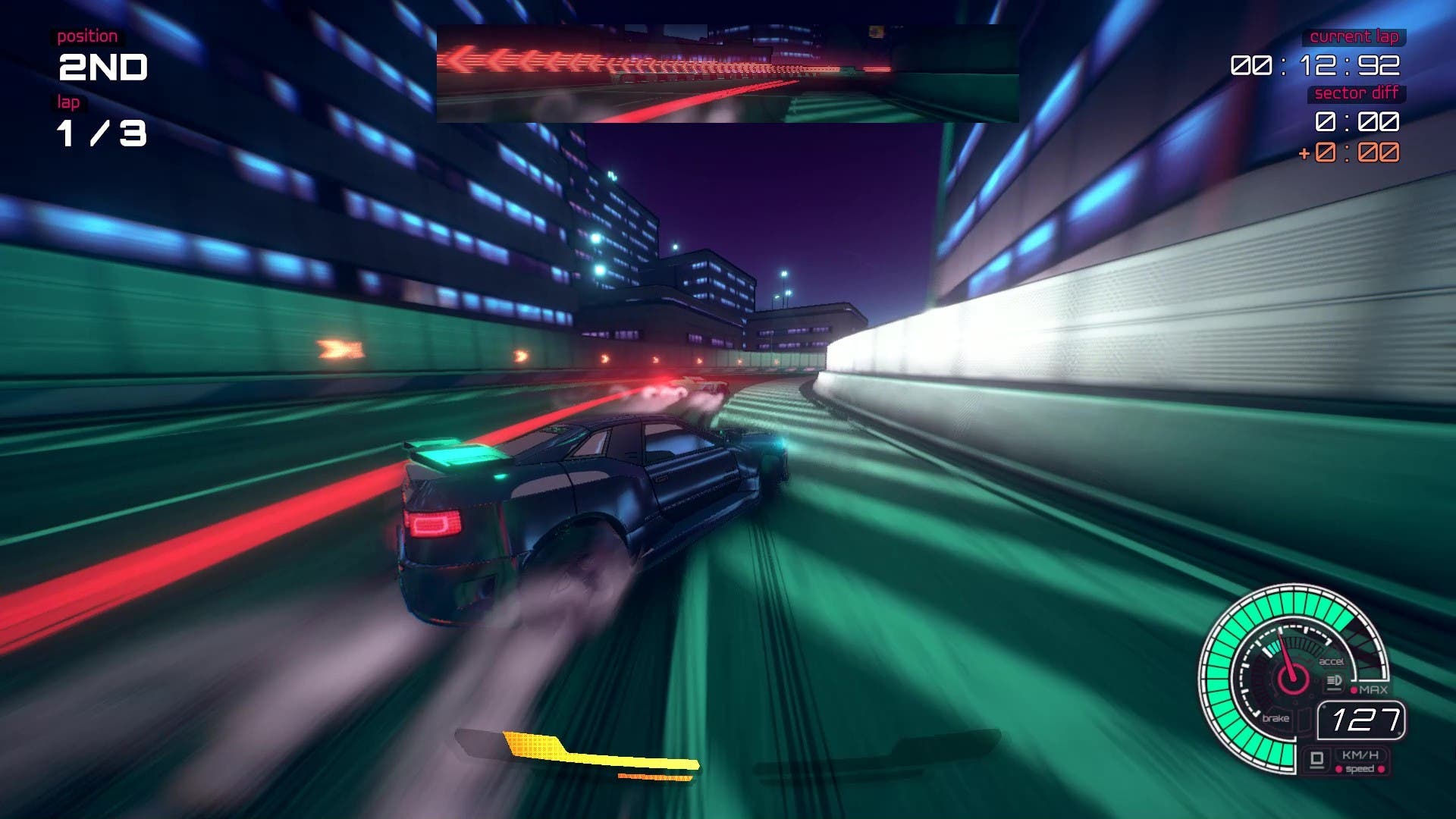 The online component of the game lets you test your mettle amongst the game’s three car classes: A, B, and C-class. I couldn’t matchmake with anyone under A-class my entire time. These class of cars are incredibly difficult to control, and for anyone still work their way through the multiple characters of story mode are going to get trounced here. The are options to let the game automatically select your region, or for you to pick it manually. The player pool seems a bit shallow, but it isn’t impossible to find someone to race against online. 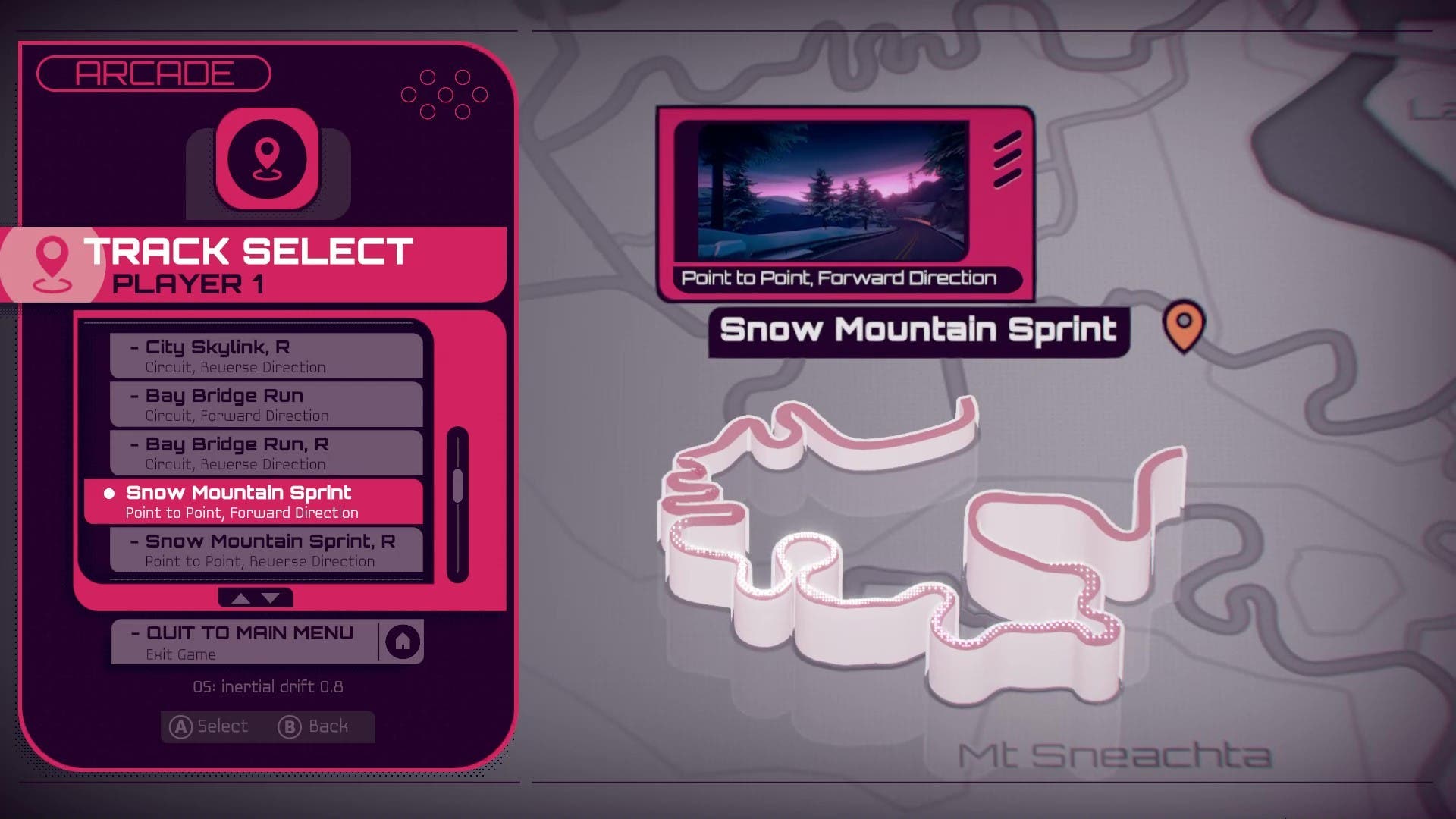 There are twenty tracks in total, to include their reverse variants. And they take places across five locations. Lakeside Loop is the introductory place where you race by waterfalls, rivers, and lakes. City Skyline offers some inner city racing with neon-soaked skyscrapers. Snow Mountain Sprint introduces snow banks and tight corners. Sunset Sea Circuit has plenty of lighthouses and crashing waves to grab your attention. And lastly, Mount Kirino is full of high-altitude touge. You won’t find a map to be used in the game, a design decision that forces you to learn the courses by feel and what you can see rather than looking at the map the whole time. It encapsulates the mantra of drifting.

Driving later cars like the Chrono or the Katana are heavy, which requires turning and braking to let them swing out. Where as early cars like the Dart is light, and can be swung around without lifting off the gas or even applying pressure to the brake. Each car is like a fighting game character that you have to spend time with to learn its moveset. To help with this is the drift bar that exists along the bottom of the screen. It consists of two bars on the left and right of center. This is never fully explained by the game, but the top bar is for drift angle, and the bottom bar is seemingly for inertia. I never found them to be too telling on what I was doing right or wrong, but it helped in some cases. 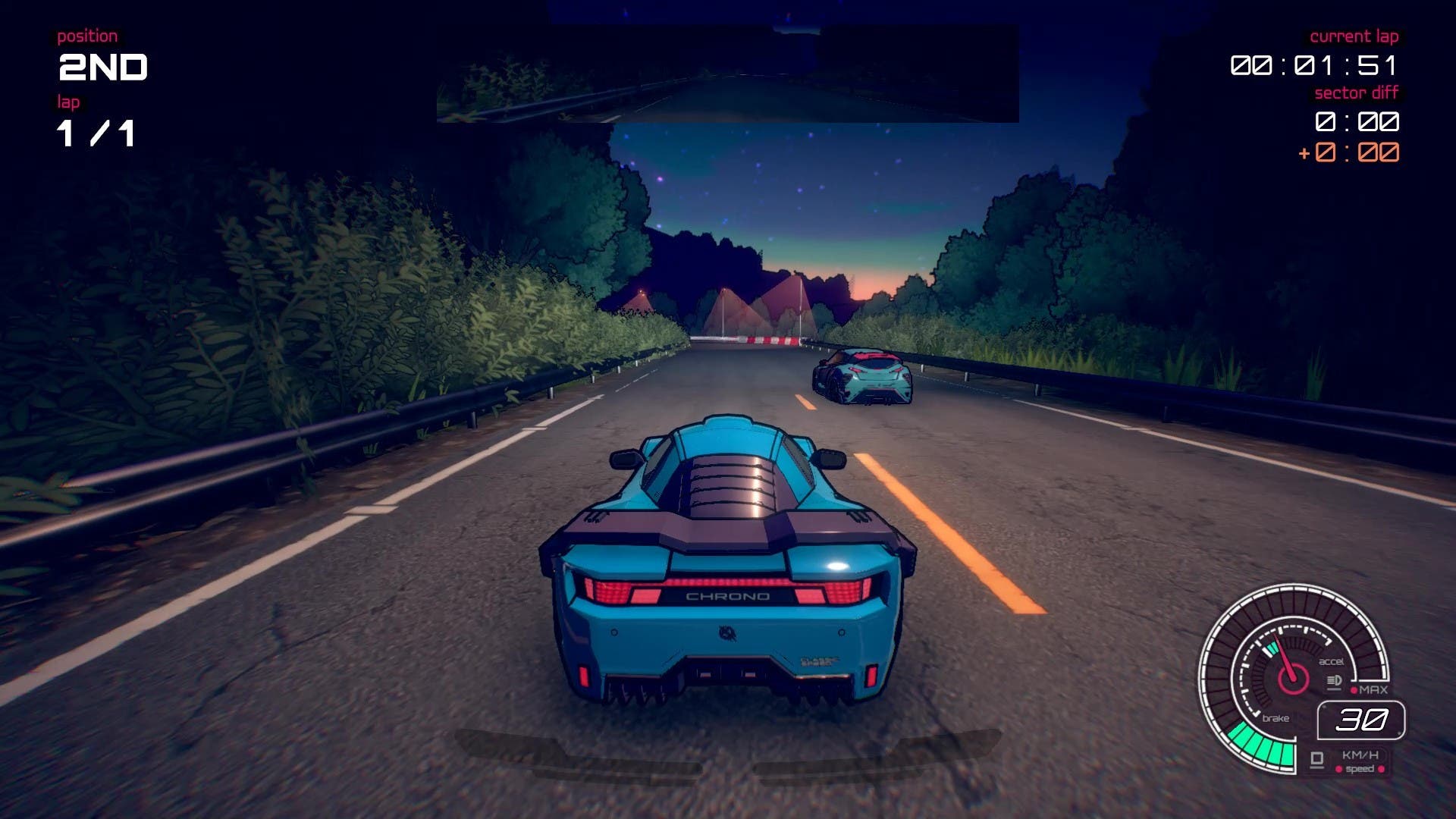 The game runs and plays incredibly well,  you won’t have a problem running this game at all at your maximum refresh rate. Inspired by manga and anime, the hard, stylized outlines of Inertial Drift is both stunning and eye-catching. There’s vibrant colors and neon all throughout. When racing against ghosts, they’re not just a singular color of blue or white. They are these holographic, pastel neon ghosts that just look really good. When you brake, in a reverse way, the lights have a ghosting effect that just look really cool like you’re coming out of hyperspace. This is a game more than its looks, though it has a lot of style to spare. 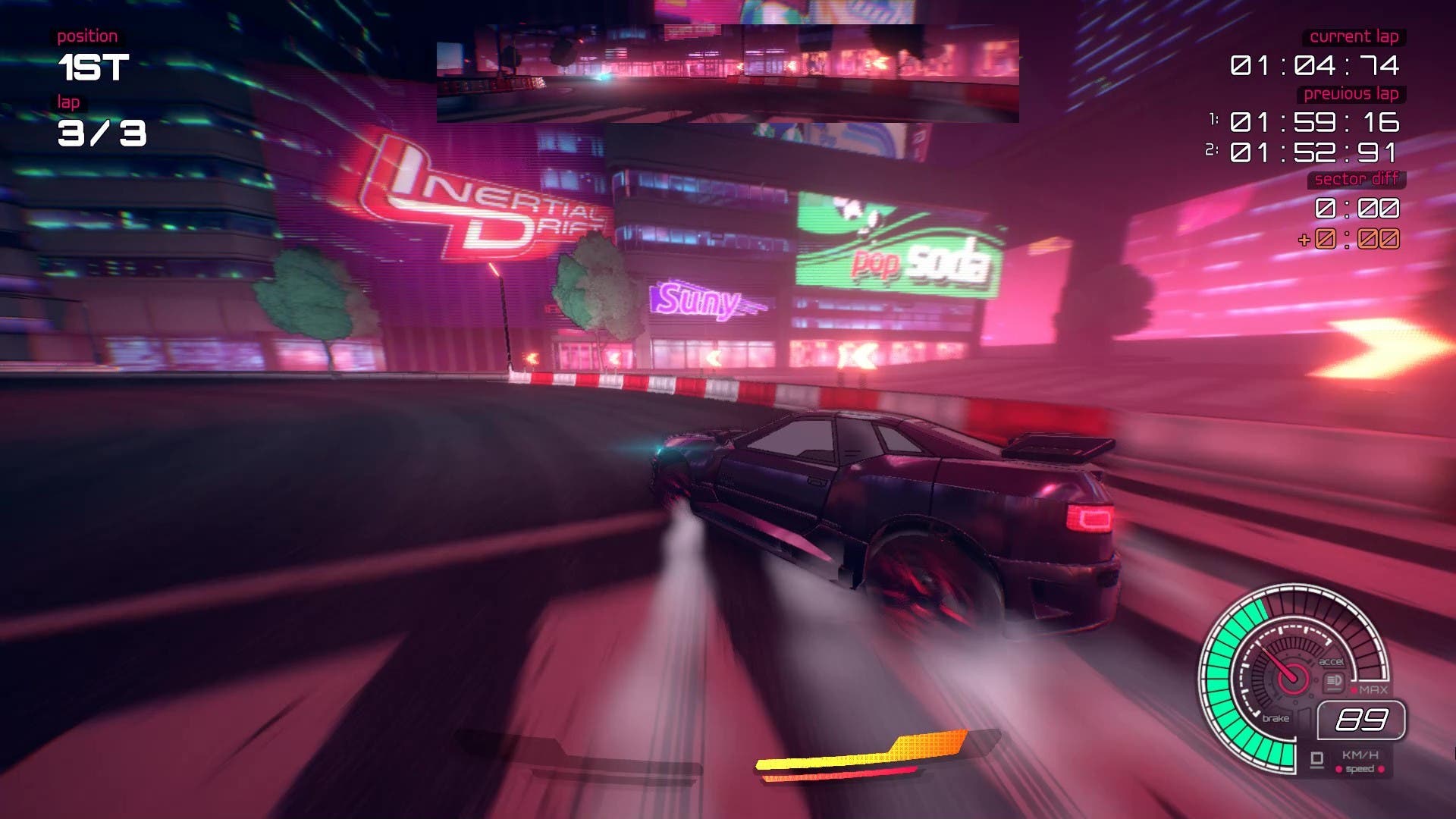 I want more from Level 91 Entertainment, and soon. In the meantime, there’s so much more work for me to do to improve my times, beat that Grand Prix that’s been eating away at me, and complete 100% of each character’s story. This is a game with heart, soul, and fantastic controls. It’s not kind to you in its first few hours, and can put many off from it, but you’ll eventually get the hang of it. It’s incredibly gorgeous to look at, but it won’t let you squeak by without working hard for your wins. Inertial Drift is revolutionary with its twin-stick drifting, full-stop.