Stubbs the Zombie in Rebel Without a Pulse Review

This re-release of Stubbs the Zombie in Rebel Without a Pulse does make me wish it was a remake like Destroy All Humans! got last year. However, it being exactly how I remember and so little changed is some great nostalgia. It's a fun, silly, and stupid game that doesn't last too long — kind of perfect for 2021. It's a budget priced title that is clearly aiming to gauge interest in a potential sequel, and I'm all for it. I had a blast going back to experience being a love-stricken zombie all over again.

There’s something special about Stubbs the Zombie in Rebel Without a Pulse. It’s a bizarre thing too, and not just from a gameplay design choices from 16 years ago. It’s peculiar because it’s a game from three console generations ago, and it just resurfaced as it got re-released by publisher Aspyr. Now available on all modern consoles and PC, it looks and plays just how I remember. Stubbs the Zombie in Rebel Without a Pulse may not have been a massive hit, but it’s looked back on fondly. Now this is different kind of zombie game, and it’s a good way to kill the time. “Would Anyone Like A Peanut?” 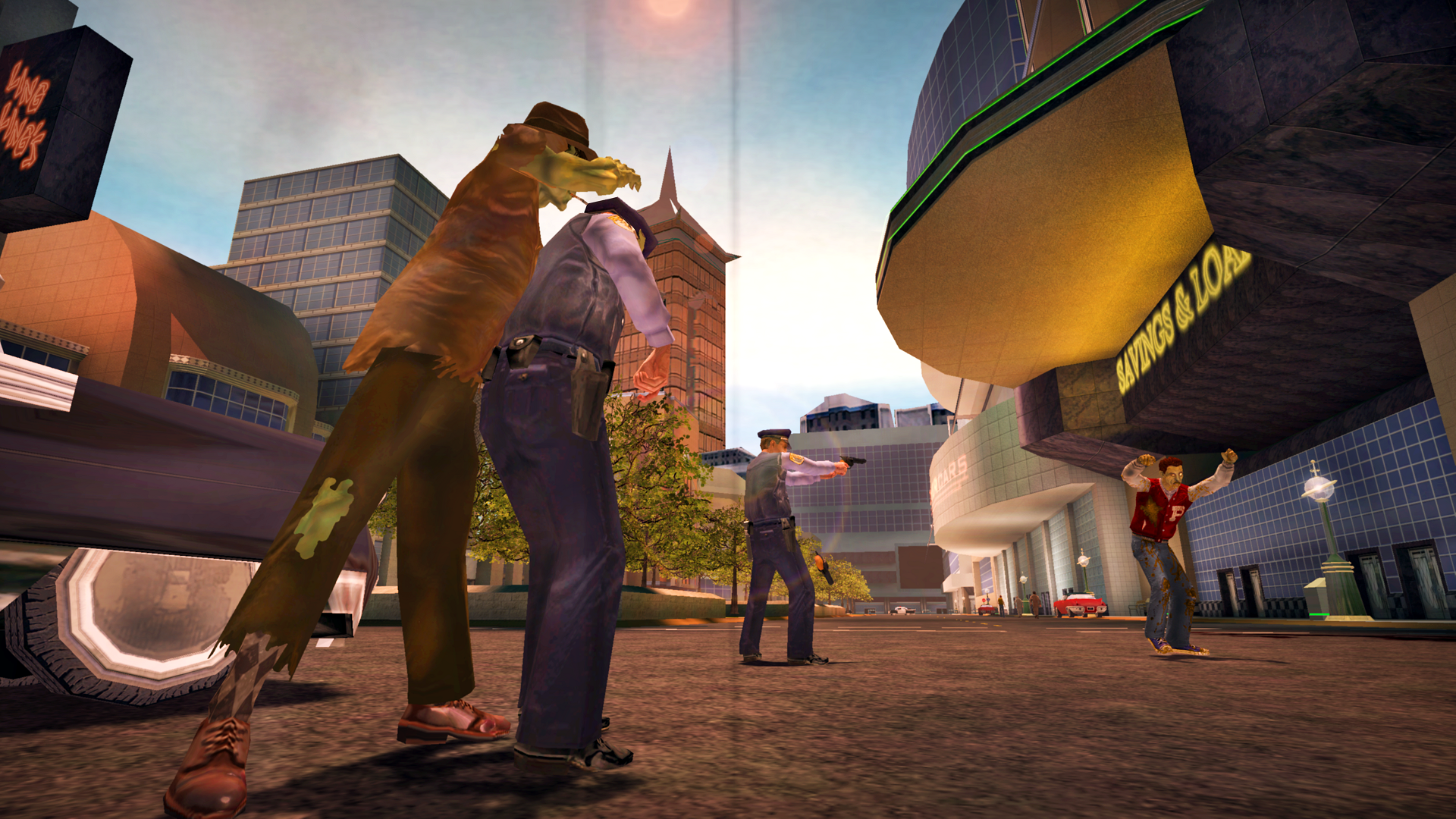 There is a story, but the explanations and payoffs come way later into the game. All you know is that you’re a salesman in love, and you’re on a quest to find her by any means necessary. The problem is that you’re a zombie. This takes place in an alternate 1959 inside the fictional town of Punchbowl, Pennsylvania. What makes it alternate is that there’s robots, hovercars, and experimental technology being used. It’s a very interesting world here, but you only scratch the surface of it across the game’s 12 missions. My first playthrough took me five hours to see the end credits. This can be done as little as two hours, according to the corresponding achievement you can unlock.

I normally don’t mention achievements in reviews, but this one’s an exception. For one, achievements were added to the game because they weren’t a thing back on the original Xbox and Windows. Secondly, the achievements were created with tongue planted firmly in cheek. It seems the team responsible for getting this working on modern systems and having to create the achievements recognized that there were flaws in the game’s design that doesn’t get fixed or changed. So you have ones that say “Complete the painfully slow, forced tutorial” or “We know what you did”, the latter awarded when you complete a level that does a terrible job at guiding you through it, regardless of how linear this game is. The achievement toasts and their descriptions would often get me to smirk or even chuckle, and I love that Aspyr embraced this fully for what it is.

As Stubbs, you’ll have a growing arsenal of attacks as you progress. Additionally, you have a basic melee attack and jump. Once a human has been rendered stunned or worn down, they are able to be bitten. Biting humans does two things: restore health, and turns them into zombies. You can just attack humans until they die, and then they turn. This is the least desired option, as biting humans will net you further benefits as you make your way through the campaign. As you turn humans into zombies, you can whistle to get them to follow you. Or if they’re in your way, push them towards the direction you want them to go.

The first ability you’re given is a fart attack, which is an area of effect attack that stuns all nearby enemies in its range. You’re then able to eat brains at-will, lessening the chance of taking damage. Next you are able to detach your hand from your body and remote control it. If you find a human, especially one with a gun, you can control them to take out other humans while protecting your zombie body. Next your gut has highly volatile, and you can rip out up to three of them to throw like remote-controlled explosives. The last ability you get, is where you detach your head and roll like a bowling ball, which can also be detonated for massive damage and kills. Stubbs’ arsenal is not that varied, but it’s always fun to use them in combat to thin out the herd while you regenerate health.

The missions are not all that exciting, but you’ll go all over Punchbowl such as the town square, the dam, a garden, a secret lab, and even a military base. Each mission is linear, but the game continually does a bad job at pointing you in the right direction. Some missions if you’re not progressing will start to indicate where you’re needed to go, but it’s inconsistent. Typical of the era, there will be boss battles from time to time. Some of them are just do enough damage to end it, some of them follow the “rule of threes”, and there’s one that’s a dance battle. Requiring that you play Simon says to out dance the police commissioner set to covers of 1950s classics is a hilarious, yet unexpected way to defeat a boss — through humiliation.

There’s even a two player mode, as it was before. It’s a separate menu option that uses a completely separate save. The second player takes on the role of Grubbs the Zombie, but there’s even less of a story for this character. It’s a thoughtful local coop mode that I’m glad to see still present within the game here. 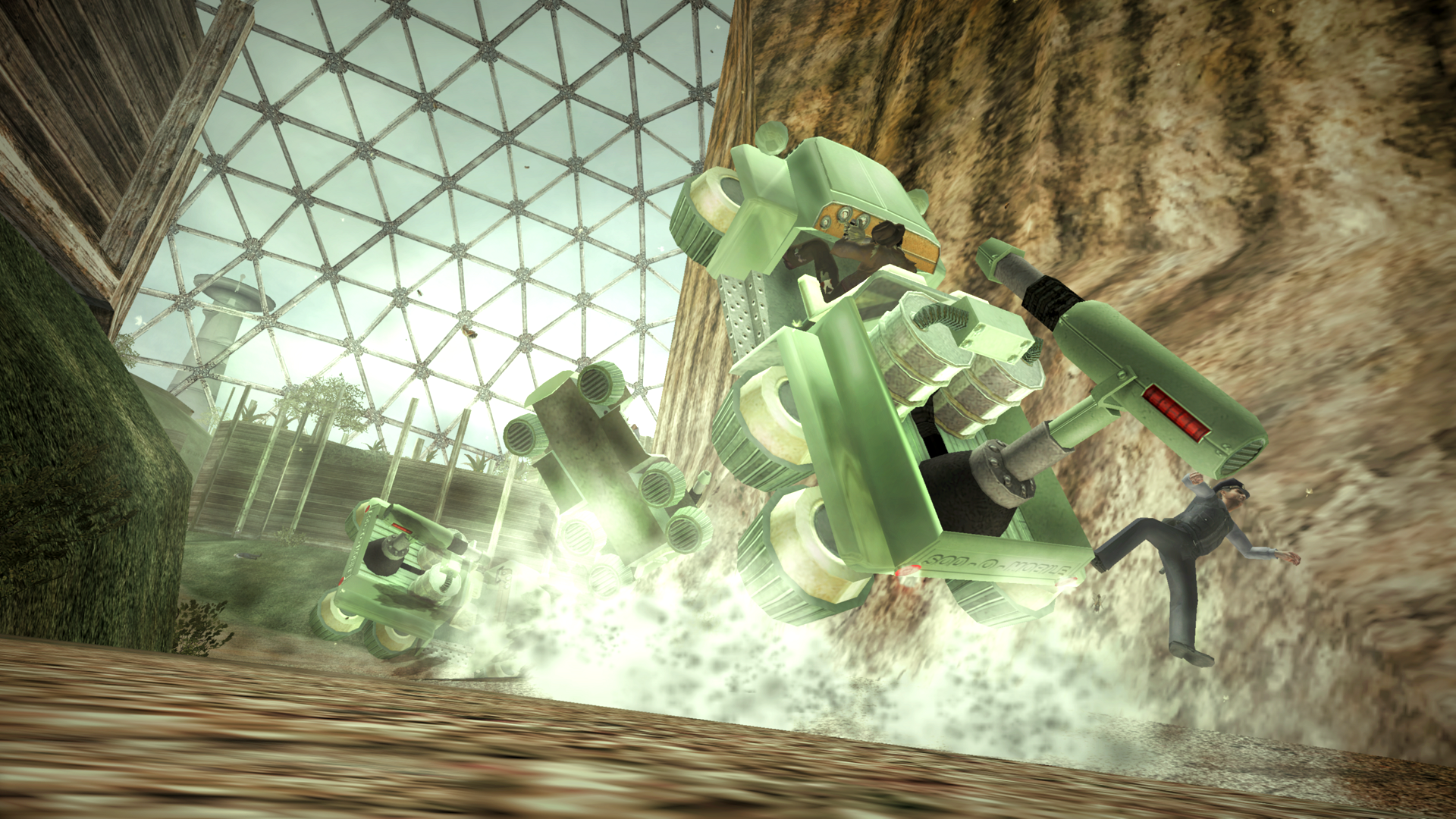 To say that Stubbs the Zombie in Rebel Without a Pulse received no updates is not a fair statement. There was work done to run in high resolutions on consoles, and it ran in my monitor’s native 1440p resolution, and was easily able to max out the framerate. The controls have been updated for keyboard and mouse, as well as controller. The visuals themselves have no real options to enable or disable, assuming it is running at max settings. The game was specially advertised for running on the Halo engine (yes, the engine that powered Bungie’s Halo: Combat Evolved). It’s very apparent during the levels where you pilot vehicles, as the controls and the way friendly AI get in and out. Now, I can’t seem to recall this being the case with the original release, but there’s a hideous green filter that can’t be disabled. During the tutorial and cutscenes, this green filter isn’t present. There’s a separate film grain option that can be turned off, but not sure why the green filter wasn’t one of them here. This is definitely a game that shows its age as streets are barren, textures are flat, and there’s a general simplicity to its aesthetic, but it doesn’t look terrible.

I never had any issues with the sounds per se, but there are some oddities. For instance, there’s no music while you’re playing the game, except during boss battles. But even then, they feature covers of 50s music. There’s even a purchasable soundtrack from the likes of Death Cab for Cutie and The Flaming Lips, if you wanted to hear the songs outside of the game. Probably the most offensive thing is all of the screaming. The sound effects for the limited characters screaming becomes obnoxious by the mid-game as you’re taking on more and more humans. This is worsened by the fact that there is no accompanying soundtrack or score, so these really stick out. You learn to deal with it, but it’s a weird choice. This re-release of Stubbs the Zombie in Rebel Without a Pulse does make me wish it was a remake like Destroy All Humans! got last year. However, it being exactly how I remember and so little changed is some great nostalgia. It’s a fun, silly, and stupid game that doesn’t last too long — kind of perfect for 2021. It’s a budget priced title that is clearly aiming to gauge interest in a potential sequel, and I’m all for it. I had a blast going back to experience being a love-stricken zombie all over again.