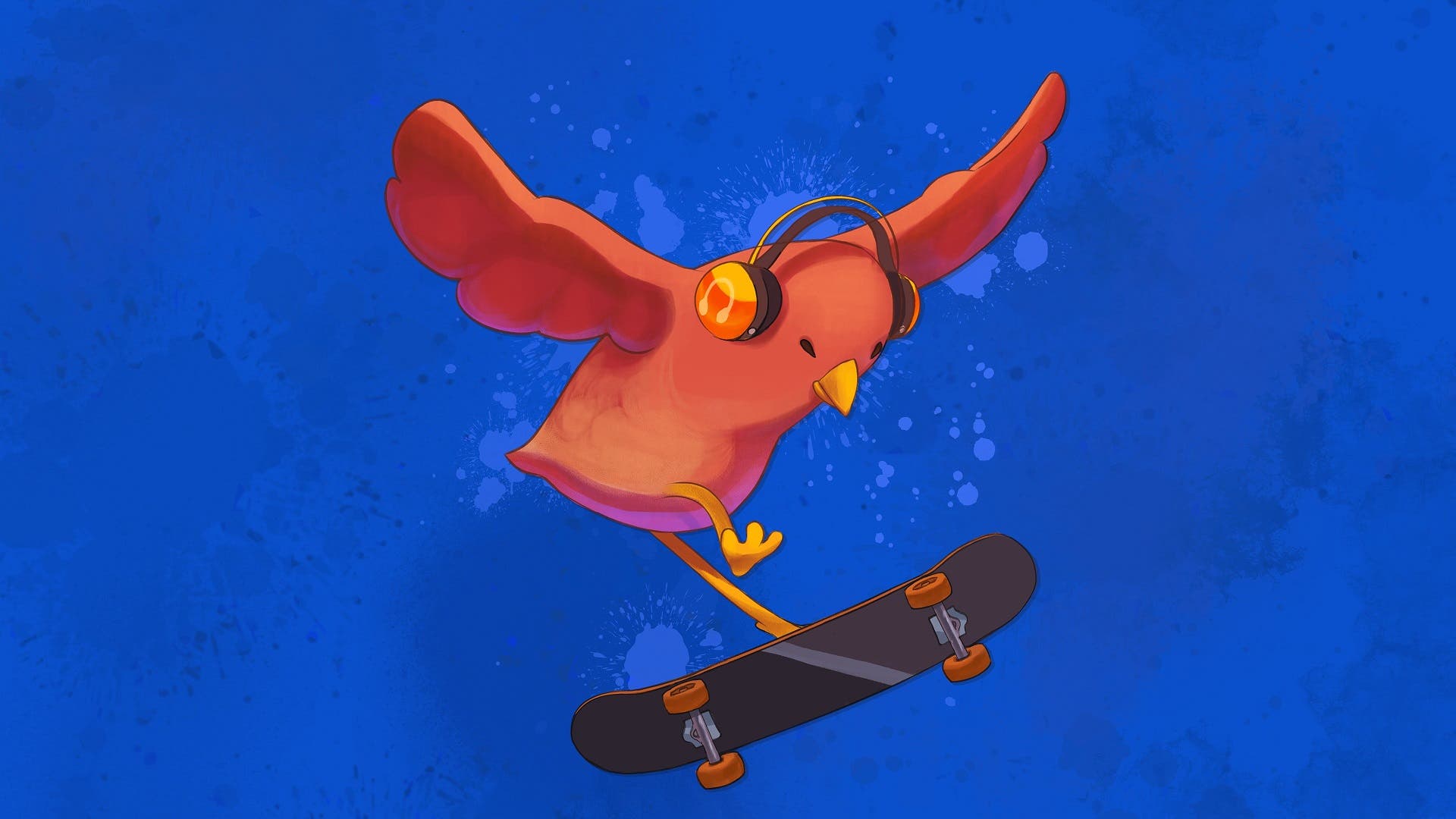 I like birds. I don’t know why; I just do. I also enjoy Tony Hawk’s Pro Skater, which I do know why. It’s fun, easily accessible, challenging to master, and it’s quick to get you into the action. SkateBIRD combines these two things and attempts to pull off a cute and wholesome Pro Skater all about trying to do your best. With birds, adorable little birds. 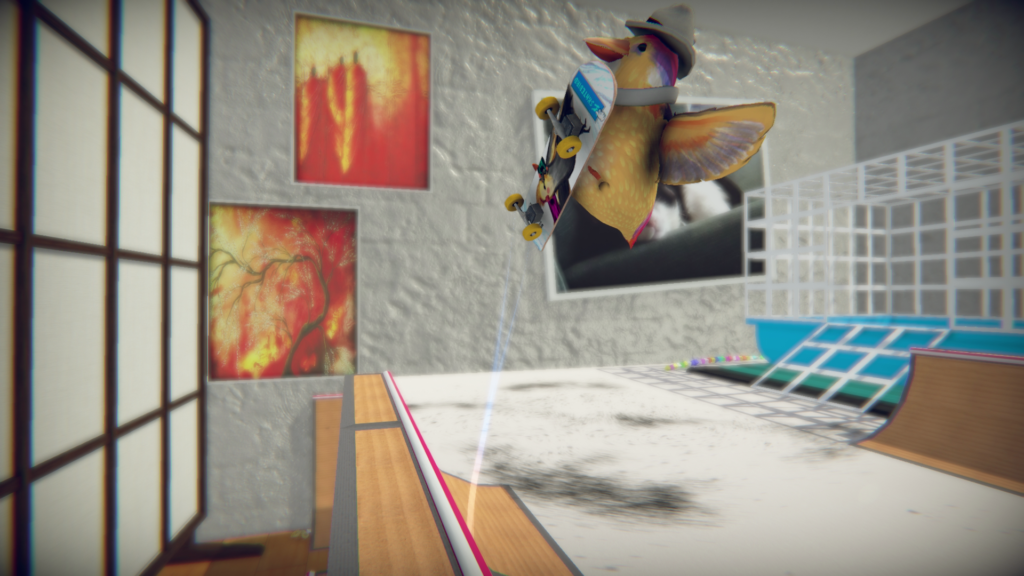 In SkateBIRD, you take control of a small bird, named Birb, riding around on a small skateboard. Your environment is scaled appropriately to your size, so your ramps are three-ring binders, grind rails are plastic straws, and you’ll pull off tricks in halfpipes made of cardboard. It’s all so adorable to look at, and it’s a feeling I never really lost throughout the game. Each new area has new environmental objects, and it’s so neat to feel of that size. To help put you in the mood navigating these levels, SkateBIRD features a unique soundtrack that’s all bird-centric. The main soundtrack is all composed of original music; they call lo-fi bird-hop. Influences for this lo-fi bird-hop include SoundCloud rap, jazz, and funk. According to designer Megan Fox and composer Nathan Madsen, “The goal was to make music resonant with the skate culture of today, rather than try and force the vibes of old-school skate games, and then have some birds sing along with it. Because, I mean, they’re birds.” Personally, I believe the soundtrack is very fitting for the atmosphere they have built. It might not be my preferred music choice, but it’s such a lovely accompaniment to my tiny bird doing tiny skate tricks.

There is an underlying narrative in SkateBIRD. There’s a reason your bird is skateboarding, and it’s because of your owner, Big Friend. Big Friend was a skateboarder themselves but has been home less often, leading to your bird leaving the room to find out why. You go on a quest, riding your skateboard, to find Big Friend and make everything better for them. It’s a simple premise, but as a result, you get to talk to other birds, and their dialogue is reasonably innocent and punny. It’s not downright cutesy like a small child’s cartoon, but more wholesome in that “birb” meme kind of way. When you find them, the conversations between the birds are enjoyable, and I always looked forward to what silly joke was about to be made. 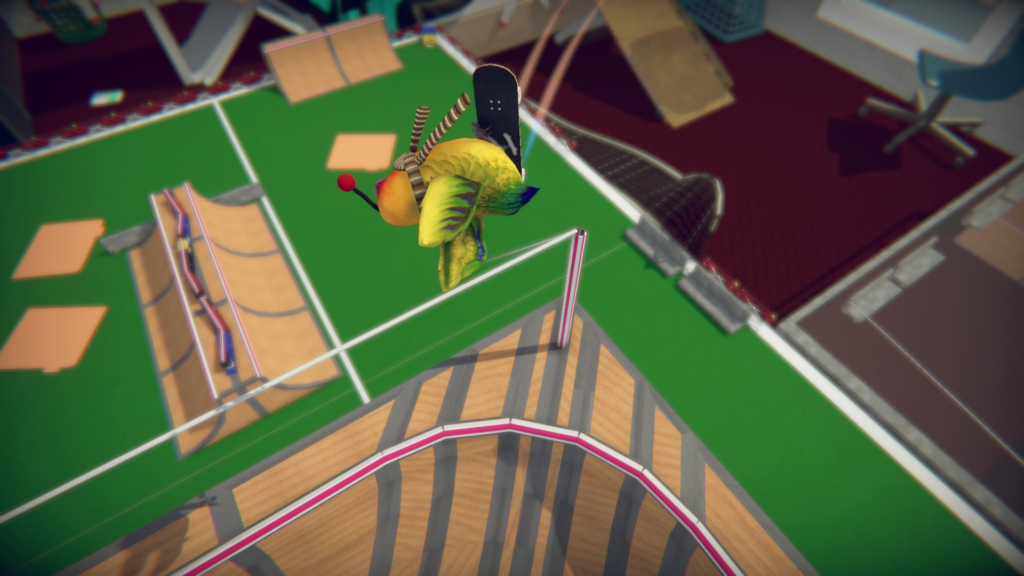 When you first boot up the game, you’re thrown into bird customization, and I was floored at the amount of content here. First and foremost, there are a ton of actual bird species to choose from. Granted, they all basically have the same look, a chubby tiny bird, similar to a Parrotlet or a Budgie. But each species looks so darn cute, and I was surprised to see they included two bird species that I have previously owned myself! The aforementioned parrotlet and a green cheek conure; I went with a blue parrotlet. But you’ll find other species like cardinals, parakeets, kingfishers, and finches.

In addition to all the birds, they give you a wide variety of items for the birds to use. There are seven options for customization: five for the bird and two for their skateboard; as you play through the levels and find hidden items, these options increase. You’ll be able to choose from things that can be worn on the head, face, neck, back, and waist while the board gets decks and wheels. You won’t get many options for your board, but since you won’t see much of it while skating, this seems ok. Out of all the accessories to choose from, I went back and swapped out items worn on the head the most. It’s here you’ll find the most variety, and honestly, the most fun-to-wear items from mohawks to baseball caps to a silly child’s propeller hat. Most of these items are available at the start of the game but will increase as you find more hidden objects within the levels. Yes, I played bird dress-up, and yes, I enjoyed it, and there’s no doubt in my mind that if you play this game, you’ll enjoy it just as much. Who doesn’t want to dress up a cute little bird? 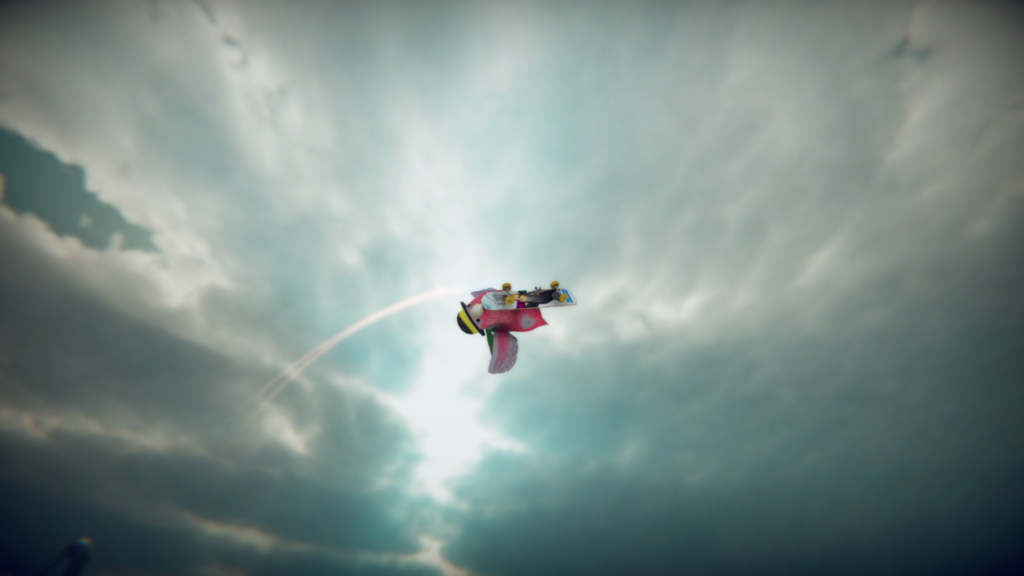 Playing dress-up can take you only so far though, does the game feel any good? That answer is a mixed bag. Let’s start with the levels. The environments are relatively open and feel big, in a bird sense. Because of that, I found myself aimlessly trying to find new objectives. To start a new objective, you have to talk to an idle bird NPC. Unfortunately, the game gives you no method of locating the birds. When you have multi-tiered levels, it becomes that much harder to find these guys. It’s not like there isn’t a method to do a marker system as there is a bird-styled compass used for some mission objectives. Why you’re not able to select from a list and have that compass point you in the right direction is a curious decision to me. Or a possible solution would have been a compass placed on the UI that will always direct you to the next available bird. It didn’t help that on the Switch, the depth of field is pretty harsh. It’s hard to make out some birds in the distance, especially when moving fast.

On the topic of objectives, SkateBIRD offers goals similar in vein to classic skateboarding games. You’ll go through the collecting of letters like the famous SKATE, rack up points for score challenges, and random level-based events like grinding specific teacups, all within a time limit. Thankfully resetting after failing or choosing to reset manually is quick. You can even set a reset maker to always have your bird warp back to a specific spot, making things that much quicker. The only new mechanic SkateBIRD brings is the addition of flapping mid-air to give you a sort of double jump feature. 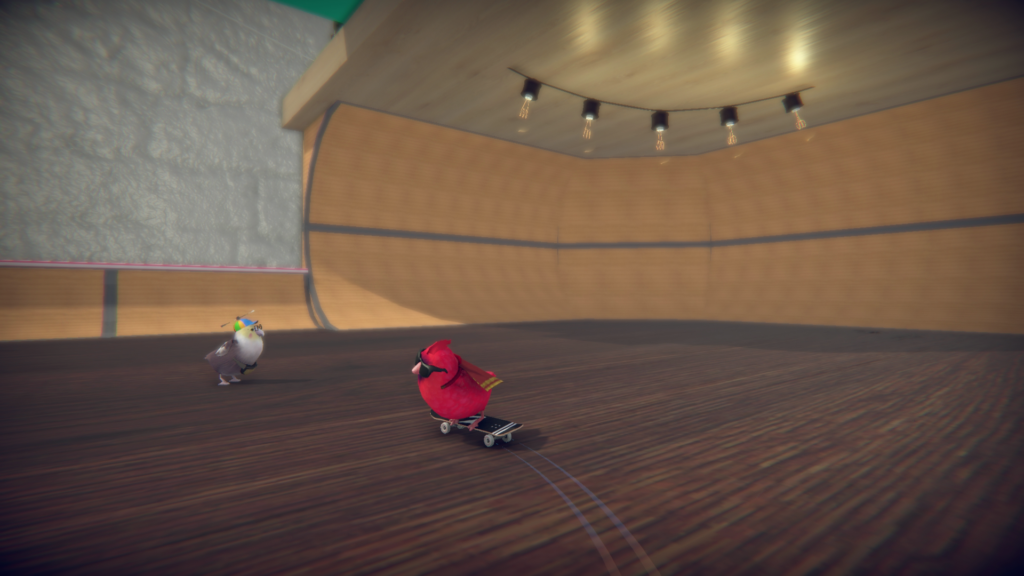 So the levels are ok; the mission finding could be better, but what about actual skateboarding? You’re going to make comparisons to Tony Hawk’s Pro Skater (THPS) so let’s get that out of the way. Your face buttons, ABXY, are laid out precisely like THPS, the top face (X) is for grinds, and lip tricks, the left face (Y) are your flip tricks, the right face (A) is designated for grab moves, and the bottom face (B) is used for ollies and speed. You’ll also find the transfer button assigned to the right shoulder. This is all fine and dandy but what I had trouble with was movement. SkateBIRD only allows you to use the joystick for movement. I played THPS with the d-pad, so I had a rough time controlling my bird around the levels. Plus, I lost any sense of muscle memory when it came to tricks. I hope that a future update will allow players to remap the controls in some way.

As for the actual gameplay, though, it’s ok. It feels like THPS but a little slow at first. To get big air and do THPS like maneuvers, you need to be going fast. To go fast, you need to fill up your Fancy meter. Like the special meter from THPS, you’ll earn more Fancy by landing tricks and combos. Speaking of combos, I liked how they only cut off a combo if you bail. Landing a trick and rolling will still keep a combo going, whereas other skating games require a manual in-between. That isn’t to say you can’t manual because you can. The benefit is earning a higher combo score and extra time to hold that combo; it’s just not required. The mechanics here aren’t quite as tight as, say SKATE or as challenging to master like THPS, but I felt good enough that I was confident in pulling off some sick combos.

SkateBIRD offers a similar experience to other skating games out there. Even if it doesn’t compete technically with the likes of EA’s Skate or challenges the skill needed for Tony Hawk’s Pro Skater, I still found it fun to play. SkateBIRD won’t replace your preferred skating game, but I think it’s a good, relaxing experience to try out. Plus, you get to play with birds, and what isn’t there to love about that?