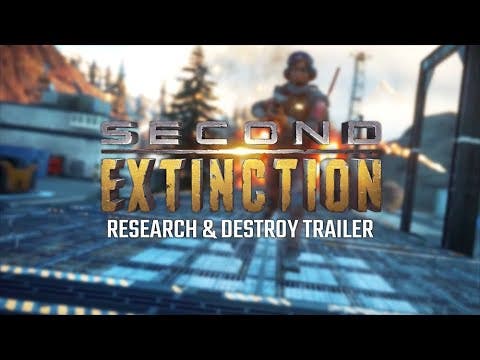 STOCKHOLM — Sept. 30, 2021 — Pre-Season 6 of Second Extinction, the action-packed co-op dino shooter from Systemic Reaction, is underway now — and it’s a big one! Pre-Season 6 is the game’s most significant update yet, introducing Emergency Landing: Horde Mode, a new playable character, and full crossplay between Xbox Series X|S, Xbox One, and PC.

And it’s the perfect time to jump in! Second Extinction is now available in early access on the Epic Games Store. It’s also free to play on Steam today until October 4, with a special 40% discount to purchase.

Second Extinction pits teams of up to three players against swarms of bloodthirsty dinos in fast-paced battles across Earth’s post-apocalyptic wastelands. Equip a range of powerful weapons and abilities and fight solo or with friends against monstrous dinosaurs long thought extinct — now mutated and deadlier than ever! The War Effort is Second Extinction’s community-driven global metagame: by completing missions and activities, you’ll affect the threat level and challenges players around the world face.

Second Extinction is available on Xbox Series X|S, Xbox One, the Microsoft Store for PC, and Xbox Game Pass for consoles and PC via Xbox Game Preview. It is also available in PC early access via Steam and the Epic Games Store.

Players can keep up with Second Extinction’s ongoing development roadmap at www.SecondExtinctionGame.com. For other news, follow @2nd_Extinction on Twitter and join the community on Discord.