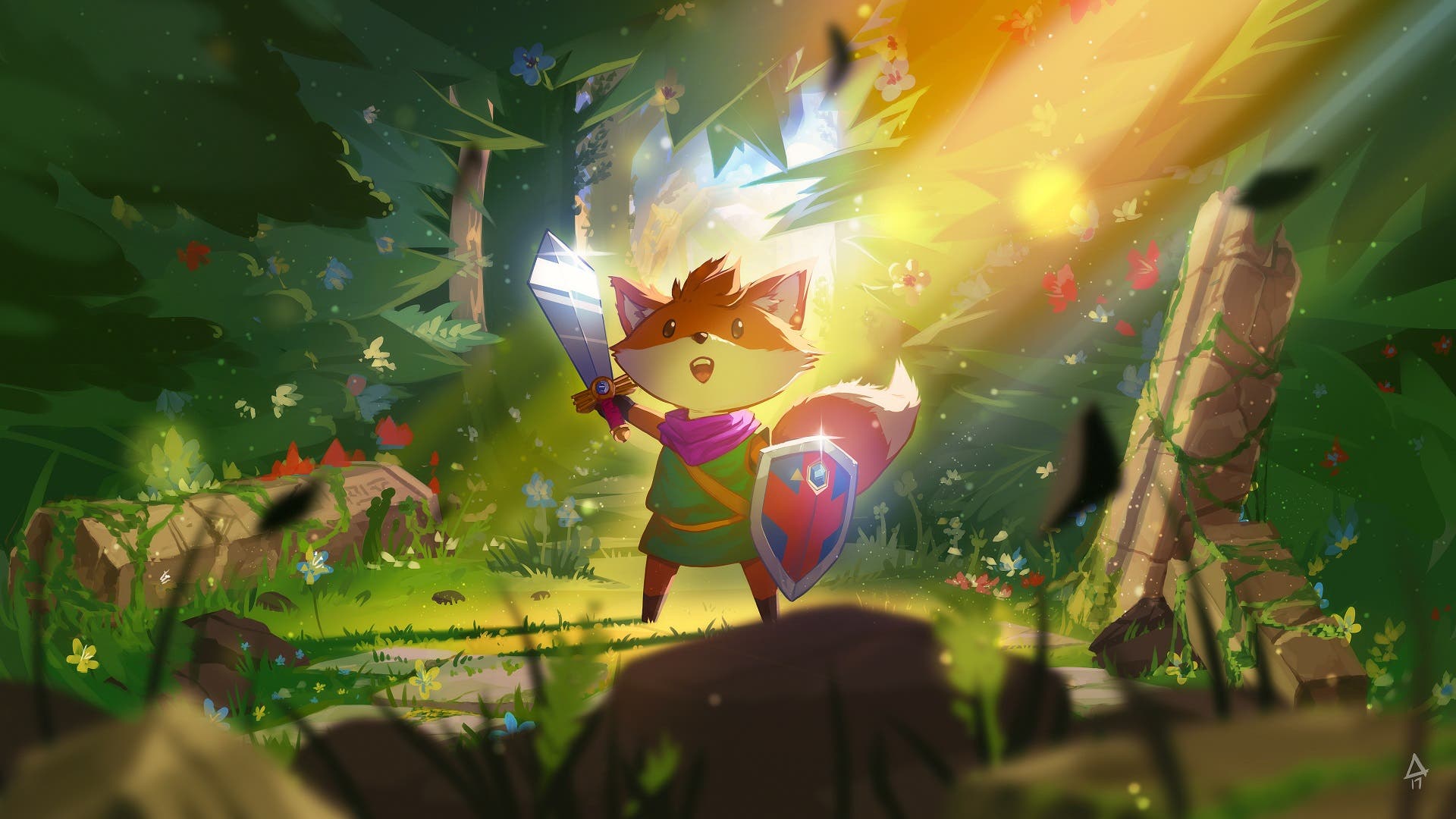 Sitting down to play TUNIC for the first time, you immediately know you’re in for something special. Many games have attempted to capture the exuberance and wonder that so many of us felt playing through The Legend of Zelda: A Link to the Past, but few have recreated and elevated that sensation the way TUNIC does. It is a stunningly beautiful homage to the golden age of 16-bit gaming, featuring razor sharp mechanics, excellent world design, challenging combat, clever puzzles, and an incredible score. Dripping with charm, confidence, and polished to a mirror sheen, Tunic is an adventure that is not to be missed. 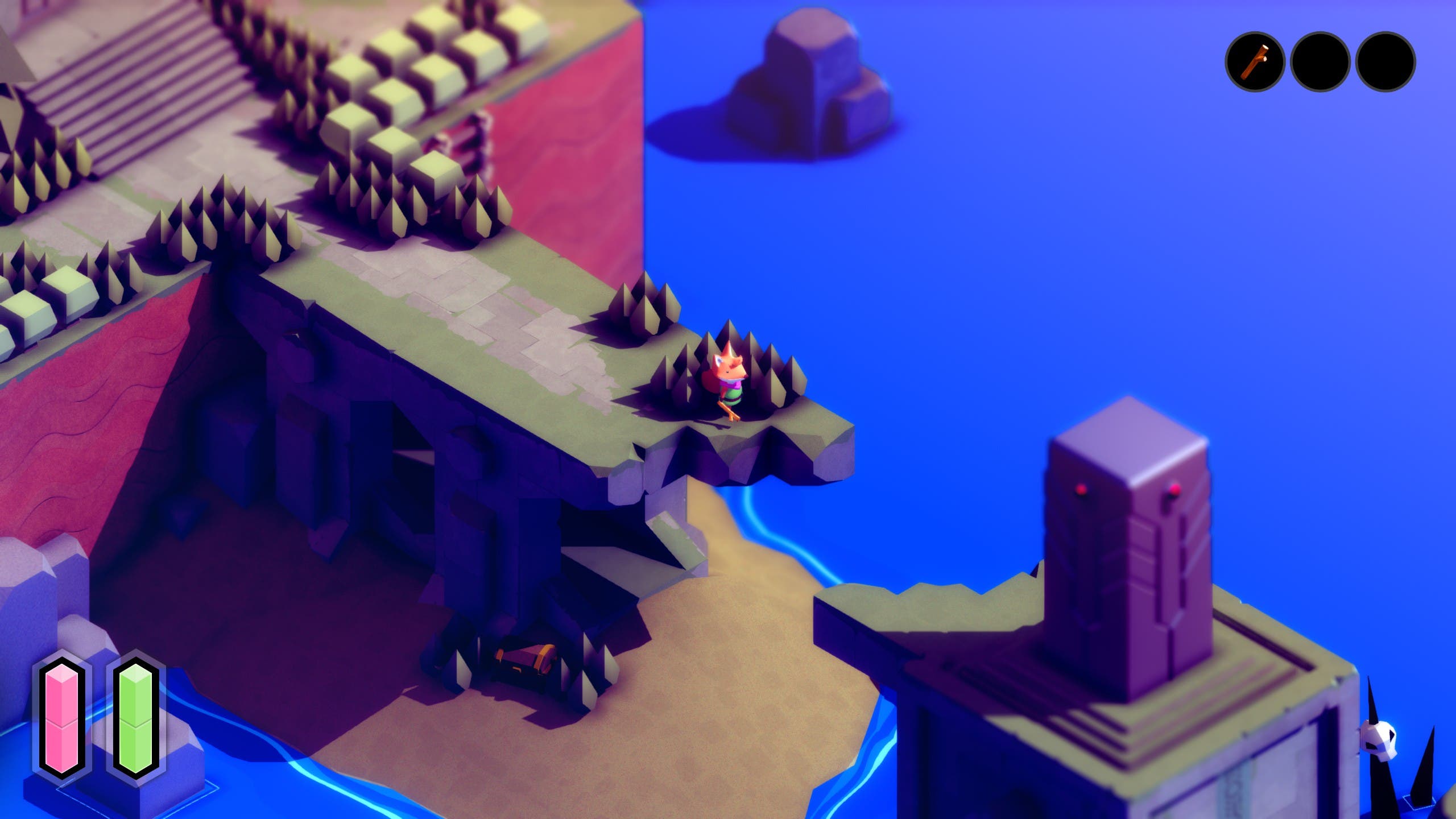 Playing as a twee little fox, you wash up on the beach of a strange land with nothing but the tunic on your back. The isometric camera reveals a stylized geometric landscape drenched in vibrant colors, rich textures, and beautiful lighting effects, and in many ways it feels like a painstakingly illustrated cartoon come to life.  You quickly find a nice stick to defend yourself with, and then you’re off on an adventure in a world that’s not too happy to have you, but that you must fight your way through to return home (presumably).

As you explore you’ll find more tools to help you on your way, encounter tougher enemies that want to stop you, and feel your mind boggle as you see all of the clever and hidden ways the world wraps around on itself. The formula is instantly recognizable, borrowing heavily from classic Zelda titles in its mechanics, world design, and game progression. Combat is straightforward, giving you a three-tap attack combo for your primary weapon, and allowing you to equip two extra items of your choice to map to your two other buttons. Technically you can map all three buttons with whichever loadout you wish, eschewing a stick or sword entirely for other choices like bombs, magic scepters, weird magical purple grabber things, or consumables that can replenish or give you temporary buffs. The game sports a lock-on targeting system, and a shield you can use or ignore at your leisure. 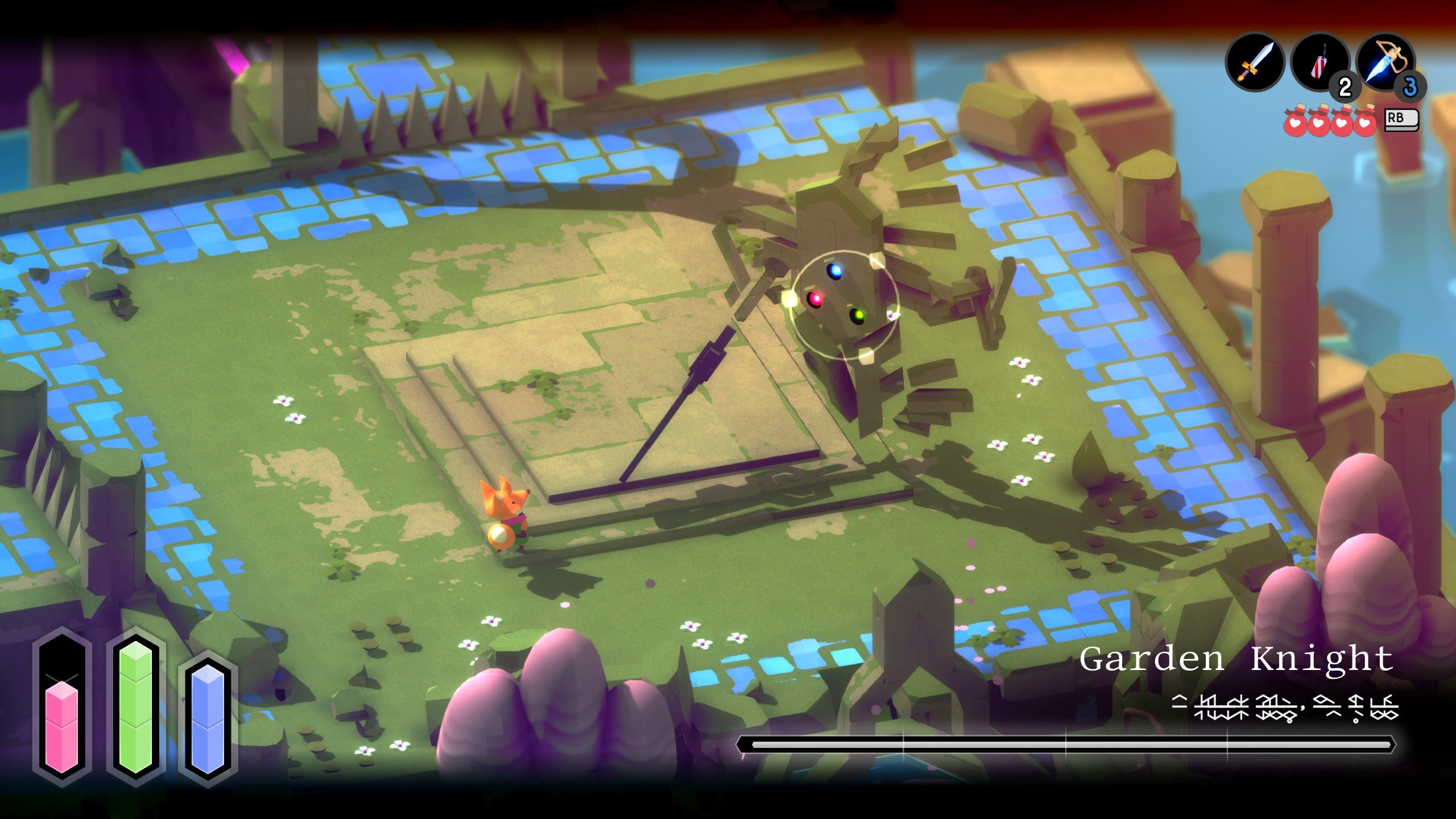 Your plucky fox can dodge-roll and sprint, giving it a level of agility that Link never had in the olden days. The ability to customize your loadout, combined with the maneuverability you have and the heartiness of the enemies you face makes the combat feel more akin to a Souls-like in practice, so fights are fluid and exciting. That feeling of similarity doubles once you discover this game sports a respawn and retrieve system that the Souls games made famous, though the cost of death is significantly lower.

These are all things I knew and expected of TUNIC from pre-release materials and the technical preview released in December. What I did NOT expect was for the game’s puzzles to get so deep and self-referential, for me to need to grab a notebook to start jotting down, uh, things, so I could reference them later. I dare not spoil any part of the really juicy stuff for you but I’ll say that TUNIC reignites a feeling of genuine puzzlement and gets my brain churning in ways that I have been chasing and have not experienced since FEZ released in 2013. The “wildly clever puzzler in a retro-homage package” vibe is incredibly strong with TUNIC, meaning that you will show up to play because it’s a good Zelda-like, and you’ll stick around because you’ll get lost in TUNIC‘s world and be unable to stop until you see it through to its end.

TUNIC is a devastatingly gorgeous game to behold, using color, texture, a strong sense of style, and wonderful camera effects to create an incredible presentation that animates wonderfully and is chock full of striking moments, both planned as set pieces and naturally occurring as happenstance. The attention to detail and sheer amount of energy poured into every aspect of the game’s art give you something that feels very evocative of games you know, but still has its own wholly unique identity. It’s the “this looks how my favorite old games live on in my memory” sensation, but rarely have I seen it utilized to such great effect.

One of my favorite touches in TUNIC is the in-game manual that doubles as a strategy guide. This hand-illustrated booklet that guides you through how to play is integrated with progressing in the game itself, and you’ll find pages of it scattered throughout the world that provide useful information like maps, explanations of items, useful hints, and some other things I can’t spoil. What’s most incredible to me about it is that it is so clearly influenced not just by video game manuals of the early 1990s, but that it also feels so specifically referential to the Link to the Past comic book that was published alongside that game’s original release. It’s an amazing touch full of delightful details like hand-written scribbles and notes in ball-point pen that itself clearly took a great deal of love and care to create, and it feels totally integral to the experience of playing. 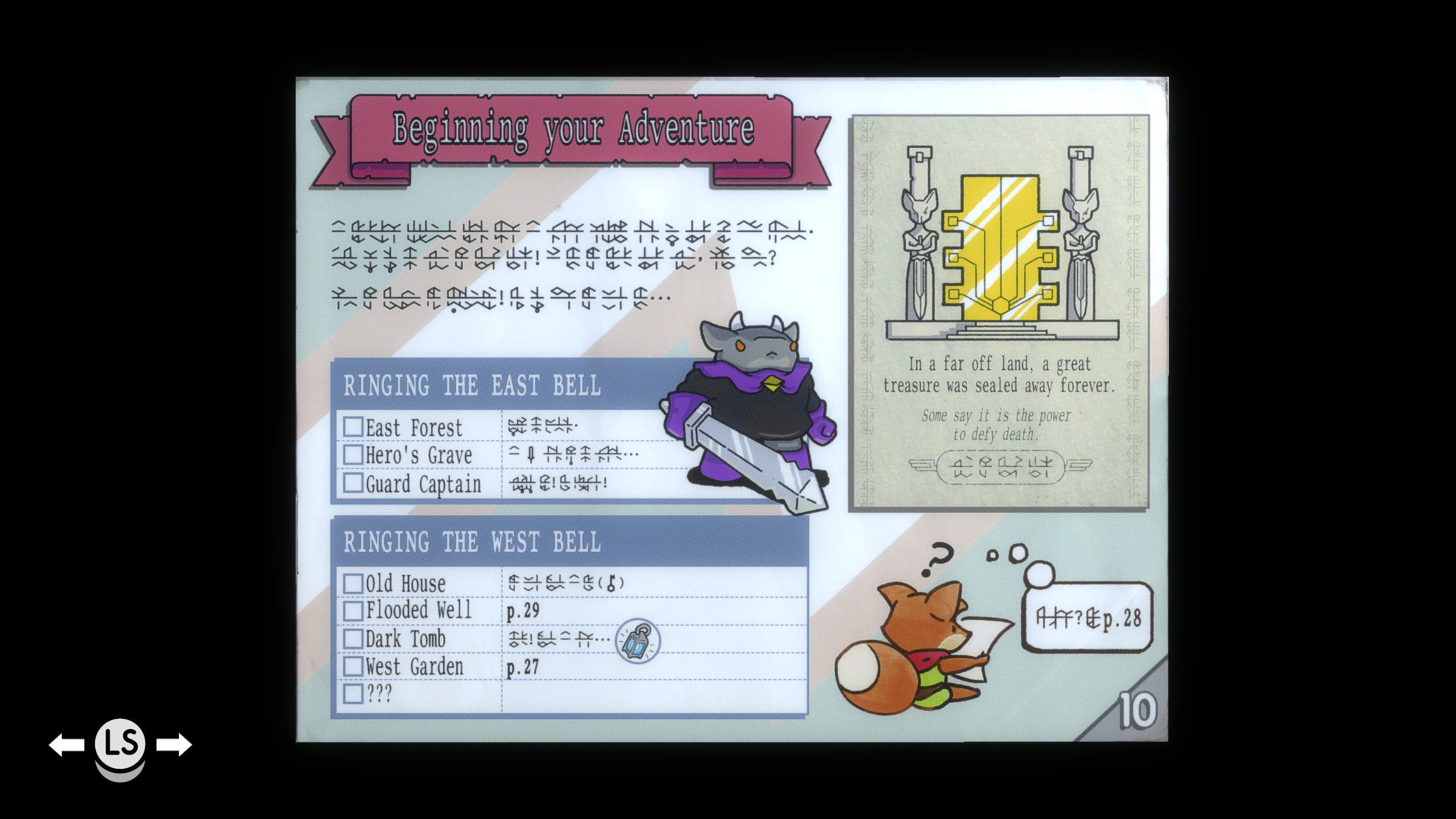 Adding to the beauty of the game is the utterly phenomenal soundtrack by Lifeformed, an artist I first fell in love with back in 2012 with their Dustforce soundtrack “Fastfall.” TUNIC‘s soundtrack is utterly iconic, using big echoing tones, lilting melodies, and masterful composition to create a dynamic score that is always perfectly suited to whatever location you’re exploring or situation you’re in, whether it’s the quiet under-canopy of the forest, the sun-drenched overworld, mysterious dungeons, or thumping and intense boss fights. It is a truly beautiful work, and it is such an incredible complement to the game that I have found many of its tunes looping in my head while I do chores or go about my business each day.

Boss fights in this game are, by the way, real highlights in an already fun and challenging adventure. They are punishingly difficult at first, giving you no quarter whatsoever and making sure you know to respect them when you enter into the arena. Each one is smartly designed though, and once you feel out their quirks you’ll devise a strategy for defeating them that will still put you up against a serious challenge, but will leave you feeling triumphant when you succeed. 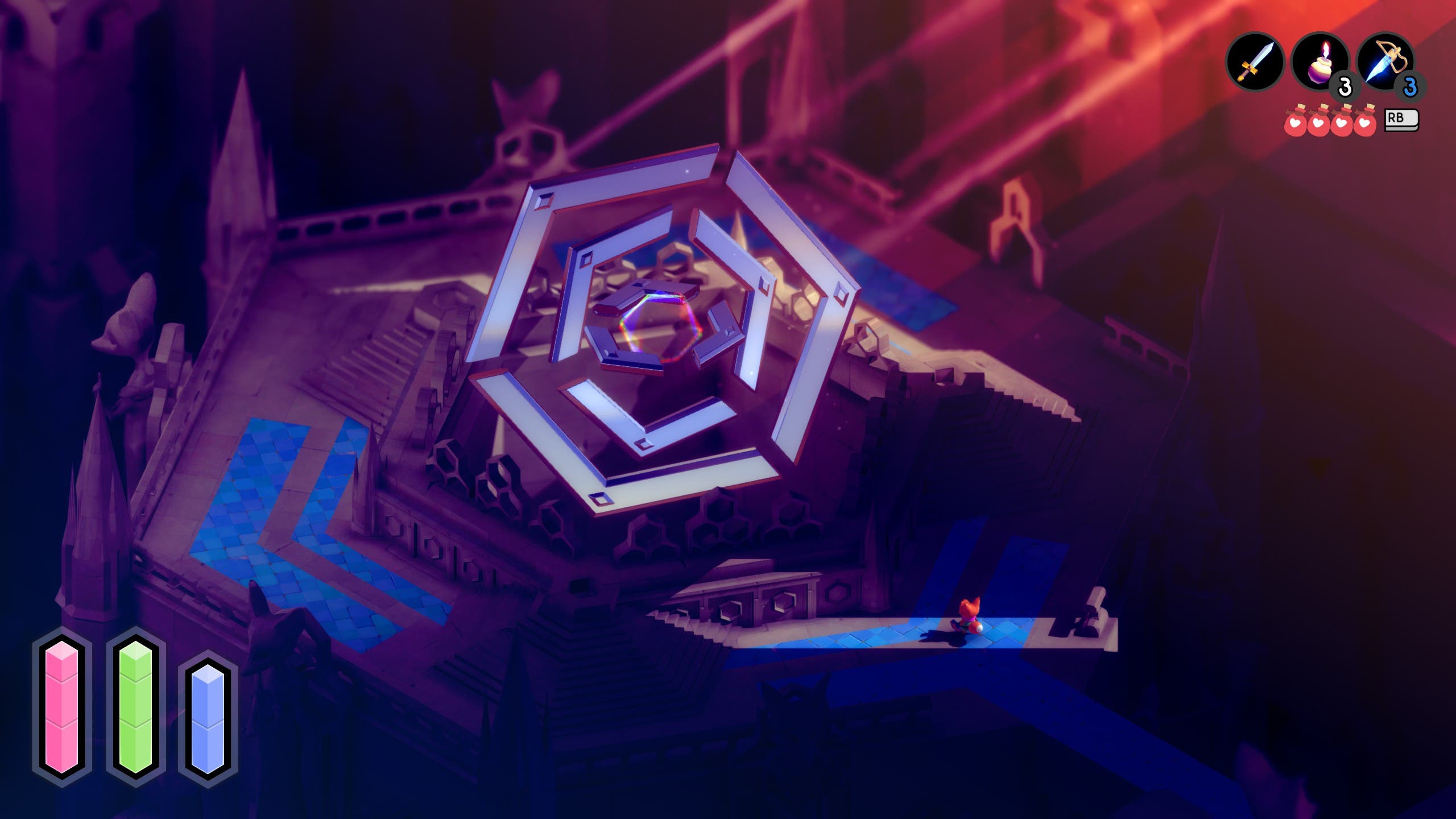 I could gush about TUNIC for ages. I have been eagerly awaiting its release for almost five years, knowing from the moment I laid eyes on it that it was going to be amazing. It’s been a long time coming, but it has lived up to every expectation I had and more, delivering an unforgettable title that is immediately going down on my list of personal favorites. TUNIC is a charming, engaging labor of love that begs you to uncover its secrets. It is the culmination of so much of what made me fall in love with video games as a kid, and it is the perfect game for anybody looking for their next foray into adventure.