This is another continued effort by Sony to bring their exclusives to PC. From Horizon: Zero Dawn to Days Gone to God of War, the ports have been excellent translations with zero compromise. Marvel’s Spider-Man Remastered is the first not to be ported by the studio that originally developed the game. It is now being done by the recently acquired Nixxes, who’ve done fantastic PC ports for many years now. This is also the first PlayStation game with ray tracing, and looks spectacular on PlayStation 5. Why is ray tracing so special? Because it makes a world of difference for reflections and lighting that absolutely shines if you’ve got the hardware to showcase it.

The story begins with a Peter Parker well out of High School, and having been Spider-Man for eight years, and yet to keep his personal life together – though he’s trying. Mary-Jane Watson is a distant ex-girlfriend, and he’s closer than ever to his Aunt May, but he’s at-risk of losing his day job due to tardiness. Spider-Man seems to be faring better by comparison, admittedly not by much. J. Jonah Jameson has a seemingly hourly podcast commenting and degrading Spider-Man every chance he gets, a hilariously unnerving parody of Alex Jones. Spider-Man has captured a lot of criminals, and it seems that things are reaching a boiling point. Insomniac really did something different here, and it’s great to see a Spider-Man well into his tenure in the role. So much time has passed that even the Avengers have their tower to assemble in New York. 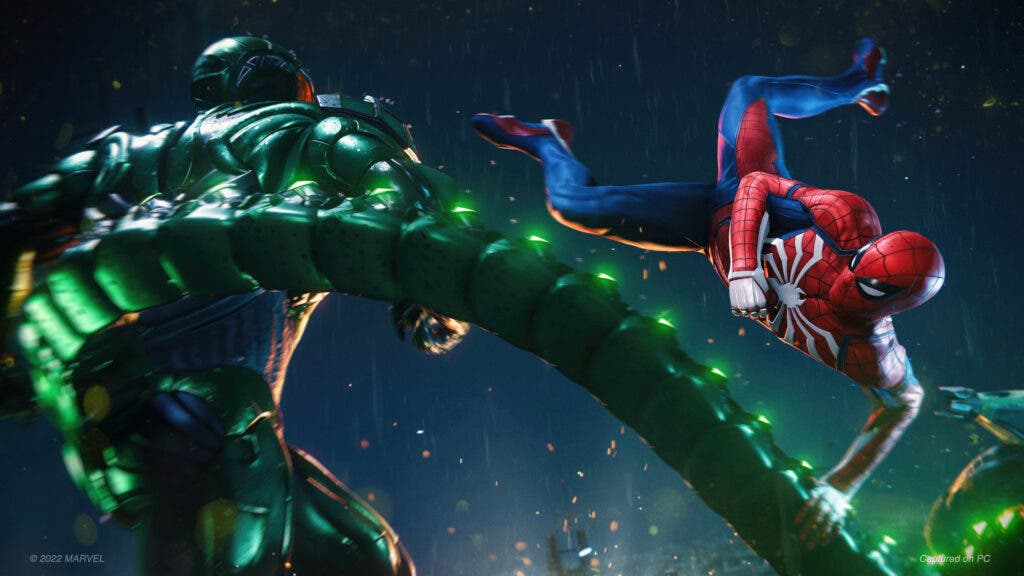 I have to say that the structure of the game is neither groundbreaking or surprising, but is extremely well done. You’ll have your main missions and side missions or high amounts of experience points, then you’ll have all these side activities to partake in. Because Peter Parker is so technologically attuned, he even has his own app to monitor for messages and requests for help. So you’ll be dropping in to stop crimes; or revisiting an old hobby like taking pictures, this time of landmarks.

All those experience points turn into character levels. Those points can be used to cash in on skills that improve web-slinging, combat, or expanding Peter’s repertoire. Accompanying these levels, new Spider-Man suits unlock from his various comic book variations and movie adaptations. The Iron Spider design from “Avengers: Endgame” is still one of my favorites, but it introduced me to all kinds of suits I was never familiar with. With great suits, comes great power as you’ll be able to equip unique powers as your ultimate ability when you’re in a bind or need to quickly clear a room. These powers vary by all sorts of offensive and defensive needs, you’re likely going to find a favorite. The best part is that a power that comes with a suit are not exclusive to one another, so you’re encouraged to mix ‘n’ match. 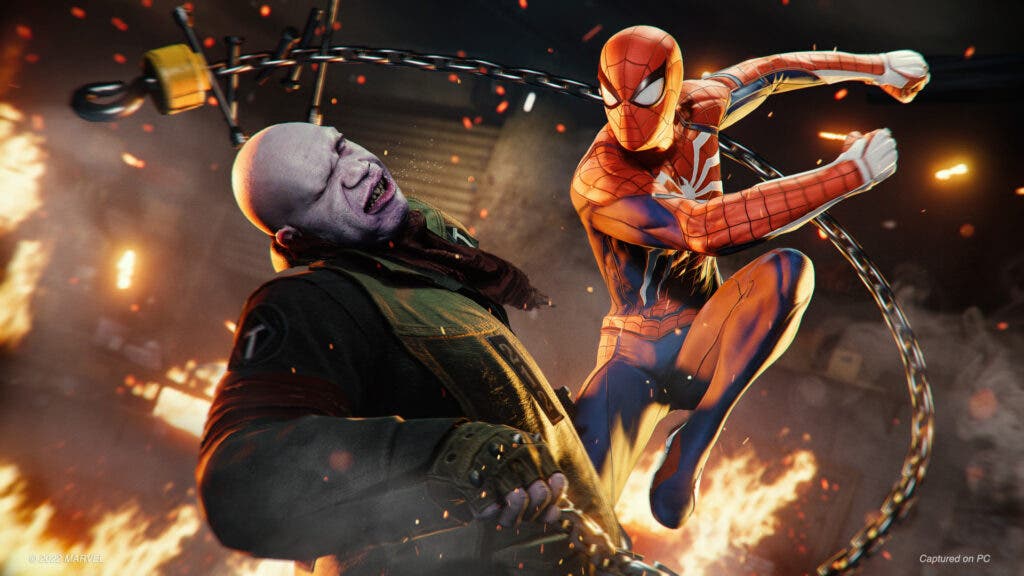 Anyone who’s played the Batman: Arkham games will find similarities here, though it isn’t exactly the same. The combat is Marvel’s Spider-Man Remastered is free-flowing, and incredibly fun and generous. Because there’s upgrades to add moves, become more resistant, and overall more effective, Spider-Man is a much more fluid in combat than Batman could dream of. Though combat is just one element, you can’t ignore that Spider-Man is incredibly good at stealth. There’s plenty of occasions where you’ll want to remain invisible. Spider-Man can hang from ceilings, crawl walls, and silently take down enemies so long as no one is looking. There’s a handy UI indicator that lets you know if enemies are “safe”, meaning you’re free to quietly dispatch them. What’s great, is that the game allows for both, and you can even switch between combat and stealth if you can manage to break line of sight.

Peter Parker is a scientist, and as such, he has gadgets that he’s invented and implements into his suit. The most basic of which are his web shooters, which are invaluable and highly recommended to upgrade them as often as possible. Impact web is an important gadget, as it can instantly stick a bad guy to a wall, immediately incapacitating them. Then you’ve got my least favorite: the spider drone, which has to be used for storyline reasons several times. Other than the required or obvious ones, I didn’t use most of the gadgets during my time. And rotating through them during combat does award you a higher score, it just never felt that much fun to use. Aside from selecting a suit and ultimate ability, are suit mods. There are three slots for inserting modifications to your suit like combat analyzer that rewards extra experience for combat, or life support that automatically heals you with your focus meter, and threat sensors which increase the amount of time you’re slowed during certain situations. There’s so many great options, you’ll likely be able to define a loadout that works best for your playstyle. 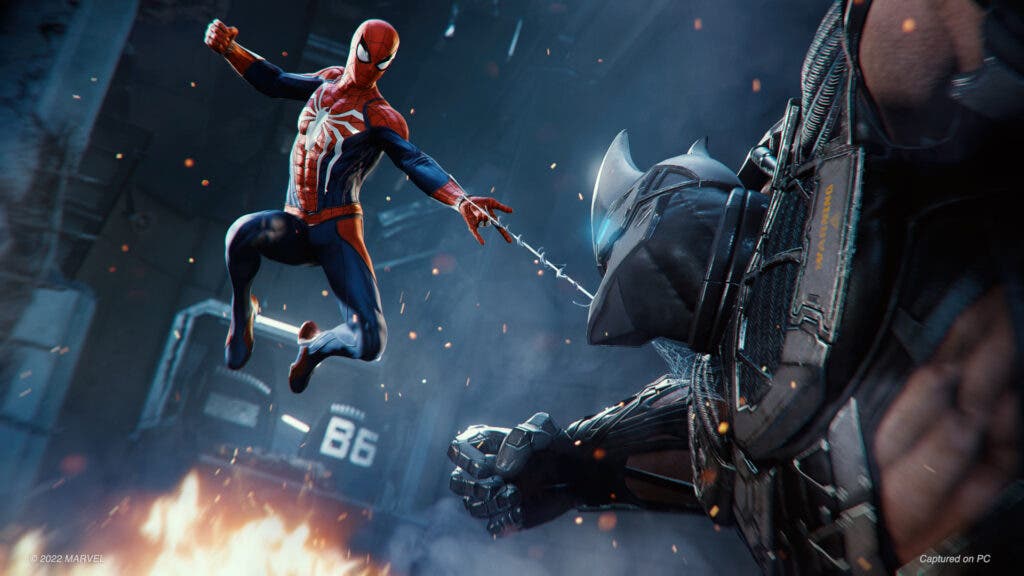 There’s a bevy of collectibles to find, like the aforementioned photo tour that consists of taking picture of landmarks, collecting old backpacks you left behind, completing research stations, and more will occupy your time when not in a mission. I have to say, all of these activities are really fun and not that hard or time consuming to complete. I even found myself doing all of them almost at once, just because I liked engaging with it all. You almost feel compelled to participate in these, as the currency earned by doing this is what allows you to make purchases of suits, mods, and gadgets. It’s a system that feeds into itself, and doesn’t feel superfluous.

The game is effectively the “Game of the Year Edition” as well, so it includes all three DLCs that were released. I think if you’re craving more Spider-Man after completing the main story, then you should absolutely delve in. I just don’t think they’re essential to the experience. The first episode, The Heist focuses on the Black Cat and Spider-Man’s torrid history with her. The second episode, my least favorite centers around the flat-faced Hammerhead in Turf Wars. Lastly is the exciting Silver Lining episode, which revolves around the mysterious Silver Sable and the budding relationship there. They’re not long DLCs, but have their own progression meter and unique collectibles that will satisfy.

There’s a lot to be excited about, but the remastered version of this game includes Ray Tracing, and looks incredible on PlayStation 5. It was then after putting all of my settings to maximum, that the PlayStation 5’s presentation was only half the story. The PC version looks amazing, but definitely at a cost, this isn’t a game you’ll be running at high framerates. Running in 1440p, I was able to average 60fps without super sampling, almost always above that no matter where I was in the story. There’s a whole host of options to mess with, though I think the super sampling options are the most intriguing. You’ve got NVIDIA’s DLSS and AMD’s FSR implementation APIs, but Insomniac also has a technique called Insomniac Games Temporal Injection, or IGTI. For me, I found DLSS to be the clear winner, where I achieved closer to 70-80fps on average with the best picture. What worked for me may not you, so I’d recommend following Digital Foundry’s settings.

Marvel’s Spider-Man Remastered is one of the best open-world games out there. While New York City can be bland at times, it’s the playground that makes Spider-Man work so well. The PS4 game remastered for PS5 is now on PC, and it’s the definitive version of such an epic game. Spider-Man has been sorely missed on PC for years, and it’s a great return for the web-slinger. Everything you’ve heard about the game is true, and Insomniac nailed every element of it. Marvel’s Spider-Man Remastered is just incredible, and is one of those games that will stick with you, and you’ll return to often.