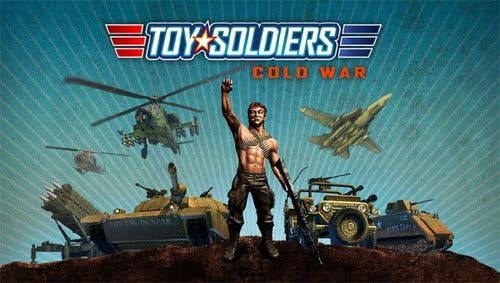 The basic foundation of this game is that of its predecessor, tower defense and then some.  You have a few choices when in the menu.  You basically have single player, multiplayer, and mini-games.  In Mini-Games you get a choice of a few types of local for the mini-game and in each local there is a different general goal that you have to accomplish.  Choosing one of the later mini-games you are placed in a top down view of a base.  Looking around you may notice that there is a large toy box which will serve as your base.  There are also circular pads where you place “towers” to defend that toy box at all costs.  Now you need to start placing your “towers” which in this game are machine gun emplacements, anti-tank bunkers, “napalm” throwers, mortar teams, anti-air turrets, and artillery machinery to keep the waves of Russian foot troops and vehicles from reaching your toy box.

In a normal tower defense game you just place the towers and watch the result, not so here.  Not only are you required to defend your base by strategically placing the correct emplacements, but you now need to help defend your toy box as your emplacements.  Now you have the choice of who to take down!  The power is yours!  You get an extra bonus for keeping up a good kill combo and these points add up to give you special weapons.  One such weapon is a Rambo style character that has a machine gun and rocket launcher that can, more or less, take out anything.  But wait that’s not all!  You also have your own vehicles that you can operate to for defense as well.  Hey, while you’re at it, why not take the fight to the Russians with a multitude of RC tanks, a helicopters, and a jet just to name a few.  Each of these are easily controlled but will take some practice of the controls to grasp how they work.  With having all of these toys at your disposal, you still need to defend your base until the Russians stop their onslaught.  There is also a section that allows you a survival mode and as it states, it is you vs an unlimited amount of Russian waves.

The mini-game/survival section is where this game shines.  Why?  Because it is the epitome of replay value.  You will find yourself playing for hours taking that level 4 machine gun and mowing down those helpless foot troops and then hop out to get into your tank to help your anti-tank guns take out those annoying Russian vehicles.  But wait, what the hell is that noise?  Crap, get out, get out, get out!  Where did I put my anti-air turret?  There, there, there.  Ok now where is that bomber?  Come on, where are you!?  NO! NO! NO!  Game over.  Wow not even playing and I got wrapped up in it!

The single player mode, the only minor flaw in the game.  There is nothing wrong with gameplay or story as the gameplay is the same as the other modes and the story is really basic but more than enough for a tower defense game.  No, the problem with the single player mode is that it is far to short.  I personally completed the single player mode in roughly a solid day of gameplay.  Though this is only an Xbox arcade game, I believe the single player could have been bumped up with three or four more levels as each level can take 30 min to an hour.  Now, for all you Cold War buffs, remember when I said the “Cold War” will cook out?  I know, a bad baking joke, but this is not a game to tell the history of our Cold War.  The only historical facts that are pulled into this game are the two sides and most of the vehicles.  A minor gripe and for me, not one that deterred me from the game.  Others, maybe not but hey it’s not a History Channel game so poo on you.

What do we have with this game?  We have a well-built tower defense game, that allows the gamer to get into the gunner’s seat and really get into the game.  We have a game that may not have an accurate story line or a long single player mode, but has splendid replay value for a great hour wasting game.  So put down your Angry Birds or whatever iOS game your wasting time with and pick up you 360 controller, download and play yourself a well made Xbox 360 Arcade title in DA DADADA DUM, Toy Soldiers: Cold War.