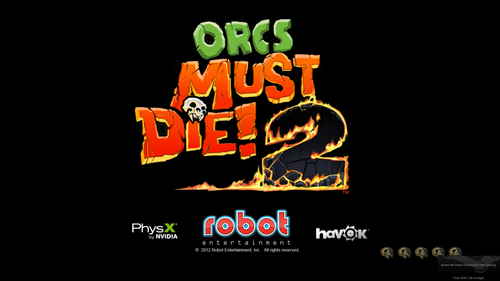 The War Mage is back! And this time, the Sorceress and antagonist from the original game has been banished from her throne and must help extinguish the Orcs that threaten to go through the Rift. New traps, new weapons, and new dungeons to defend await you in the bigger and decidedly better game.

Orcs Must Die! 2 assumes you’ve already played the first and drops you into your first defensible area with little tutorial outside of the loading screens. The first level is no easy task, but it is far less challenging than the levels that follow. It’s entirely possible that you’ll make it through the first level even if you haven’t played it before. Cutscenes open the game and in-between acts to inform you on the story and allow for the characters to have a conversation rather than the one-liner banter that occurs during levels.

The gameplay formula is simple: Set traps and take direct action of either the War Mage or Sorceress. At the beginning of each location, you have an infinite amount of time and finite resources to place traps in the environment from your spellbook that will increase over time as you buy more traps, weapons, and upgrades for them outside of gameplay. Then, you press a button to unleash the horde and begin fighting. You can attack with your crossbow, shotgun, or staff as the War Mage or use spells in conjunction with traps for deadly combos.

The biggest and best addition to the game follows the storyline and makes it so another player can appear beside you. Yes, there is online co-op. This was one of my complaints of Orcs Must Die! and Robot Entertainment heard everyone very clearly to include co-op in the sequel. The result is a fully realized game with increased strategy instead of being the “one-man show”.

The story is shorter, but makes up for it in Modes, like with the new Endless Mode which allows you play until you can’t go on any longer. The benefit to this mode isn’t only to brag to your friends via Leaderboard, but to earn skulls, the game’s currency to spend on the in-game store to buy and upgrade traps. Other modes such as the Weekly Challenge last for one week and task you with specific limitations and options in order to complete the task. Have the original game? There’s a separate Classic Mode to play ten, hand-selected levels from the original, which is a great reward to fans and veterans.

Visuals are a delight, providing a slick, cartoonish art style which is rich in detail and features countless gallons of blood and gibs. It’s not overly violent, but shows a discernible cause and effect by accentuates killing orcs. You can almost smell the must of some of these places and feel the warmth of the torches that burn to illuminate these areas. The environment is conducive to the experience.

A lot of the sounds are re-used, but new dialogue for cutscenes and banter while in a match are funny and genuinely entertaining. The War Mage sounding like Bruce Campbell and The Sorceress coming off as a spoiled princess thrust into combat. Music gets reused in some spots, like for the victory dance which has a hilarious animation no matter how many times you see it. The Soundtrack is an optional purchase, but features some amazing songs and is lighthearted but with moody organs and guitars.

Orcs Must Die! 2 is everything Orcs Must Die! should have been. The original game was a success and laid the groundwork for what exists here. It’s fast, intense, and a riot. There are plenty of modes and difficulties to enjoy the game both offline and on. Grab your mouse, keyboard and a friend and spend a few hours at a time slaying orcs together.

A download code was provided by Robot Entertainment for review purposes