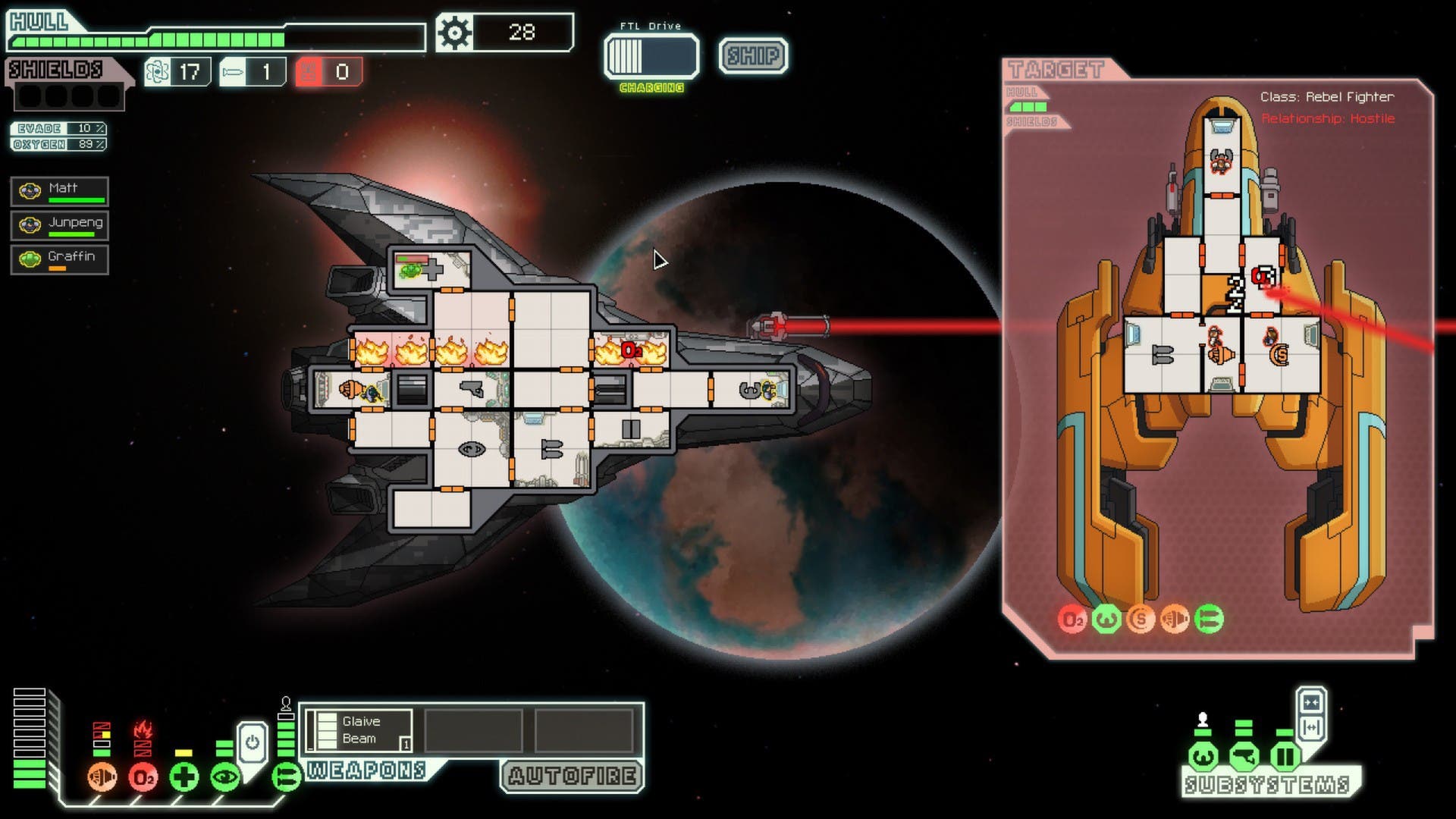 Faster Than Light is reminiscent of Battlestar Galactica in story and how it moves through the galaxy, but it’s small crew is by way of Firefly is this space rogue-like which is immensely enjoyable and infinitely replayable. This indie game is here thanks to the 2000% funding success on Kickstarter. And we are all better for it.

Once you name your ship and characters, you’re set off into space to get away from the Alliance that’s persistently following your every move, similar to the first episode of Battlestar Galactica “33”. Along the way you’ll make friends, enemies, and collect scraps and need fuel to jump using your faster than light drive. What makes this a roguelike is that your ship can become more powerful, gain new weapons, and take on crew members. With that, there is also death, permanantly. When you die, all progress is lost and you are scored and must start a new adventure. Each one is randomized and the same things won’t happen twice.

Combat happens ship to ship, arm your weapons and target specific areas on a ship to do damage. You don’t ever fight more than one ship, but if the enemy boards you, you’ll have to multitask and order your crew to go fight. Do enough and they will surrender and offer you items to go away or be obliterated. Either way, you can scavenge their carcass for items to outfit your ship or to buy at stores you find along your journey across the stars.

Managing your power resource is key to survival and feels like Star Trek in a lot of ways. It takes power from your reactor to use your guns, shields, and other subsystems. You’ll earn scrap to spend on upgrades or at the store. Choose wisely because once they are spent, you can’t undo that action. So sometimes you have to save your scrap for the store to get that big weapon that will always make you victorious in battle. But that can bite you if you aren’t managing your power consumption to not be able to even power it.

Trials and tribulations of being a ship captain are ever-present. Take a huge hit, and crew is too busy manning their stations to go put out a fire? Well, then you must leave the helm and go put it out. Or you’ll have to go man the engine to repair damage sustained so you can keep firing on the enemy or have your shields always up to reduce hull damage. Situations can get hairy real fast and without warning. You can also divert power from other systems to boost systems that aren’t fully powered for full effectiveness.

FTL is full of stories: Like the time the enemy ship teleported goons to my ship, we killed all but one and the enemy ship was destroyed. The enemy left behind, now became part of my crew and was able to help on our journey. Or the time that a fire broke out in the oxygen room and I had to vent the fire to space to put it out before I could send someone in to fix it.

Those are the success stories. There were many times where a random asteroid would hit my ship and kill me just a moment before I could jump to a safer location from an intense battle. Or engage in battle and be overwhelmed by enemy crew teleporting on-board. Sometimes they kill key members of your crew and you’re left alone piloting it.

Visually, the game lacks any real eye-popping effects. But honestly, you’re never going to have the time to notice. Everything is perfectly functional and the music and sound compliment the aesthetic to look and feel like a classic PC game.

FTL does a lot of things right and very little things wrong. Games only last anywhere from 5 to 90 minutes on average. The randomness of events can be frustrating and be overwhelming, but that’s par for the course. Faster Than Light brings the roguelike into the future with style and grace with solid writing. You can pick-up and play for a few minutes or sit for hours trying to unlock that next ship type.